Anyone for Nun’s Toast? Lucy Corry shares some of her favourite secondhand cookbooks.

Nothing smells as delicious as an old book, except perhaps an old cookbook. I was reminded of this yesterday when I wandered into a secondhand bookshop in Wellington’s Cuba Mall and accidentally-on-purpose stumbled across the cookbook section. For a long time, especially after my parents died and I acquired many books from my mother’s collection, I banned myself from buying any cookbooks, new or old.

I had enough, I declared. I don’t use the ones I have enough, I told anyone stupid enough to listen. Then I went into an op shop one day and heard the guy behind the counter telling his mate that they received so many books that they couldn’t sell or store that many of them went to the tip. This was enough to make me fall straight off the wagon and start trying to ‘save’ as many lost and unloved books as I could. I mean, I didn’t start buying books about microwave cooking or diets (even I have limits) but I did my best to prevent an ignominious end for lots of others.

After a while though, I realised I couldn’t save them all. Since then, I’ve tried to be very selective about my secondhand book habits and find new homes for duplicates. Moving to a new neighbourhood with a very good community library (where you release books into the wild for new owners) has been both a blessing and a curse; I’m putting lots of books out into the world but I seem to be picking up a fair few too. There is probably a reckoning coming. In the meantime, here are a few of my favourite finds. 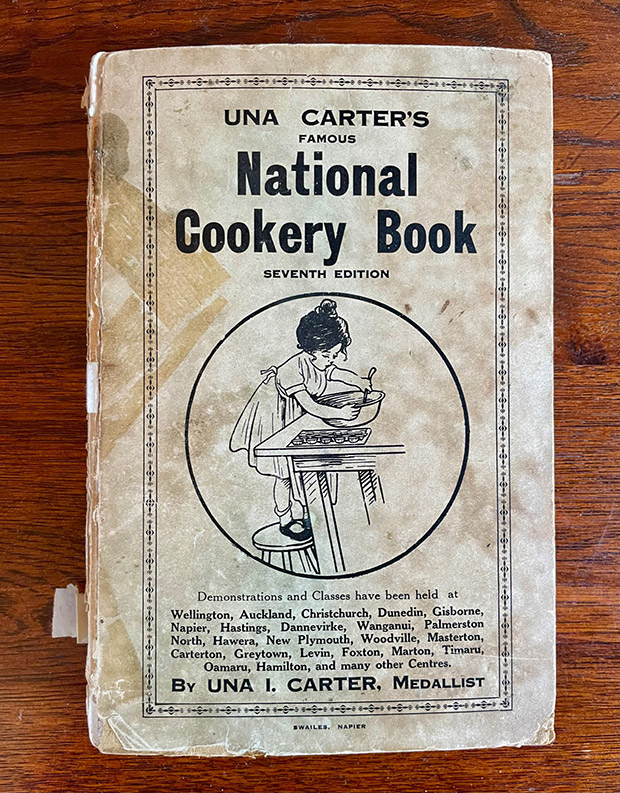 Una Carter’s Famous National Cookery Book, Seventh Edition: Ever heard of Una Carter? Me neither, until I picked this up in a Murchison junk shop for $5 a couple of years ago. In the 1920s Una Carter was the Nadia Lim of her day, teaching housewives (always housewives!) how to ‘order her household without one ounce of waste in food’. While many of Una’s recipes aren’t exactly to modern tastes (anyone for herring and brain sandwiches?) she absolutely understands the needs of her audience and the limitations of their pantries.

When I was writing Homecooked I thought a lot about Una’s dedication to her readers and her promise to them to provide simple and practical recipes. One day I might be brave enough to attempt her recipe for an egg-free omelette (I can only imagine what Elizabeth David or Richard Olney would have to say about that). A Good Year by Lois Daish: When I spotted this in Mary Potter Hospice shop in Kilbirnie about eight years ago I had to suppress a gasp. Books by Lois Daish (national treasure, wonderful writer, gifted cook) are long out of print and highly-sought after by People Who Know. This one, published in 2005, is a collection of Lois’ recipes from The New Zealand Listener, where she was columnist for two decades. When a new acquaintance came round to our place recently she spotted this in the bookshelf (next to Lois’ 1993 book, Dinner at Home) and said, ‘ahhh, a Lois fan!’ I knew then that this was a friendship worth pursuing. I live in hope of finding a copy of Good Food (another collection of Listener recipes), but perhaps that’s just greed. Edmonds’ Cookery Book, sixth edition, 1964: It’s become a bit fashionable to bag more modern editions of the Edmonds’ cookbook, but I’m very fond of this one with its satisfyingly slippery pages and strangely matte photographs. While it lacks the crucial children’s birthday party photos (the orange jelly boats!), this one does contain a special chapter on food for invalids and my favourite recipe title ever: Nun’s Toast. The former has recipes so vile you’ll feel worse just by reading them, while the latter doesn’t provide a compelling reason to join the sisterhood. Elizabeth David’s French Country Cooking, A Book of Mediterranean Food and Summer Cooking books: It’s not difficult to pick up new editions of Elizabeth David’s ground-breaking works, but I’m very attached to these three copies for sentimental reasons. I bought the first two from a charity shop in Pimlico, central London, not long after I’d moved there in 2005. My husband and I had only just got jobs, and paying a bond on our shabby flat had wiped out all our carefully saved New Zealand dollars.

Buying these books, at £3 each, seemed very extravagant at a time when I was existing on 90p egg sandwiches for lunch. But I was homesick and needed the comfort that only reading about Summer Pudding or Ratatouille can provide. The slightly tattered and torn copy of French Country Cooking is dear to me for another reason. I bought it from a Wellington charity shop where the (rather uncharitable) volunteers at the till sniffed at me snootily for being ‘one of those Elizabeth David fans’ and treated me like a junkie looking for a fix. I think of them, not in a loving way, every time I pick it up.

Breads (The Good Cook): This is one in a 28-volume series of incredible books published by Time-Life in 1979. The chief consultant was Richard Olney (author of Simple French Food, fabulous writer) and the books are meticulously researched and beautifully written, with very instructional photography. If you’ve ever wanted to learn how to wrap a sausage in brioche dough, or discover life beyond homemade sourdough, this is the book for you!

I’d love the whole set (and the time to read them) but in the meantime, I treasure this one. This set was printed as a one-off edition and so copies are reasonably rare. If you find any in your local op shop, snap them up!