Lucy Corry’s Blog: Cooking for one

If cooking is love made visible, as the saying goes, then why do I find it so hard to cook for myself? Give me an hour’s notice of the arrival of a horde of people needing to be fed and I’ll happily whip-up something passable.

Give me a night or two where I’m the only one to feed and I’ll stand in front of the fridge, looking for things to snack on like a bored teenager.

A tub of hummus, a few pickles, a spoonful of yoghurt, a piece of toast… these are not physically or emotionally sustaining on a nightly basis. Eating like this is the act of someone who doesn’t value their own appetite. Why is it so hard to get motivated to cook when it’s just me? Do I really need an audience that badly?

After regularly feeding a bunch of people, cooking for one can be a shock to the system. Like everything, cooking for ‘just yourself’ requires practise. Like it or not, population trends suggest that an increasing number of us are going to have to get better at it. Last year, census data revealed that single-person households are the second-most common household type in New Zealand after two-person ones.

There are lots of tips for people who dine alone in restaurants (go early, sit at the bar, take something to read or a notebook to write in, don’t settle for the worst table) but advice on enjoying cooking for one is harder to find. The best I’ve come across is in Anne Else’s acclaimed 2014 memoir, The Colour of Food. Else writes movingly of learning to cook for herself after the death of her husband, Harvey McQueen.

“I was sure having dinner by myself would be one of the worst things, and I was right,” she says. “Working out how to manage it proved even harder than I expected.” 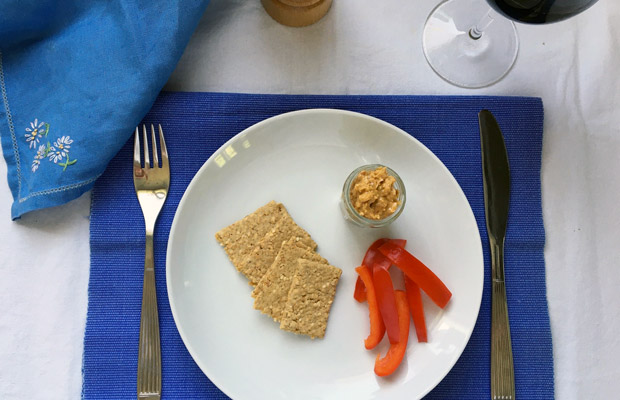 In the end, Else realises that cooking for herself is “a welcome distraction” and a nice thing to do for herself. She learns to work out what she wants to eat and puts effort into avoiding feeling lonely at dinner time. She sets the table, cooks a meal and turns on the TV for the illusion of company — but is careful not to get so transfixed by what she’s watching that she eats automatically without appreciating the effort she’s gone to.

A month ago I had four nights at home alone. Inspired by Anne Else, I decided beforehand that I was going to eat properly every night. There would be no bowls of muesli and yoghurt in front of Netflix, no crackers bending under mountains of peanut butter.

Except, the first night, when I needed a snack before going out to an event. Hello, Ryvita and cream cheese. Hello, Ryvita and peanut butter. Hello, wait, what? Is that the time? I swept the crumbs from my front and raced out the door, to an event where there was a) lots of vegan pizza and b) people to eat it with. The pizza was ho-hum, but the company was great.

The next night, as a southerly blasted the house, I made myself a bracing tomato rasam (a bit like this one, sans cabbage), halving the recipe. I sat at the table and thought how delicious it was – and how I’d struggle to convince the other members of my household that this was dinner.

The next night, salvation came in the form of a dinner invitation, where my host made this vegan cacio e pepe — an easy recipe to divide (or multiply).

The next night, working late, I was grateful for the remaining tomato rasam and it didn’t feel like a chore to be eating leftovers. By the fifth night, when I suddenly realised I had to cook for a family again, I felt like I was just hitting my stride. Maybe I didn’t need an audience after all!

When you’re down in the family cooking trenches, turning out meal after meal for a group of people who may not share your culinary sensibilities, you might yearn for a night where you only have to feed yourself. Cooking isn’t always ‘love made visible’ (sometimes it can be other emotions slapped across a plate too), but I’ve come to realise that cooking for yourself is a lot more enjoyable if you adjust your mindset.

If you eat alone on a regular basis and struggle to savour the experience, remember to treat yourself like a dear friend. Eat the things you like. Experiment. Remember you’re worth more than a boiled egg and soldiers six nights a week.

Freeze leftovers for when you’re low on energy or motivation. And if you want to give yourself the night off doing the dishes, go right ahead.

Lucy Corry’s Blog: Is there such thing as too much ice cream?

Lucy Corry: The city dweller’s guide to foraging + how to make kawakawa vinegar