Suspicious of pristine Insta-worthy kitchens, Lucy reveals the shabby kitchenware that makes a regular appearance in her day-to-day cooking.

Have you ever noticed that when people are photographed in their kitchens, all the useful things are hidden from view? Is the clutter of cooking a dirty secret that shouldn’t go on show to the general public? I can quite understand not wanting the world to see a shabby dish brush or the plastic container where the worm bin scraps go, but what about the rest of it? I feel suspicious of kitchens where there’s no evidence of food preparation or enjoyment.

In the interests of lifting the veil, then, here’s an unfiltered tour of my top 10 kitchen curios. Sensitive readers who prefer pristine surfaces and high-tech appliances, turn away now. Once upon a time I had a fancy microplane grater. It cost rather a lot of money for a one-use tool, but as it had a lifetime guarantee I figured it was worth it. Then the plastic handle snapped off after six months and rendered the whole lifetime guarantee redundant. This little guy, by contrast, has never let me down. It’s particularly good when you need to grate cheese over pasta at the table, which in my house happens rather often. 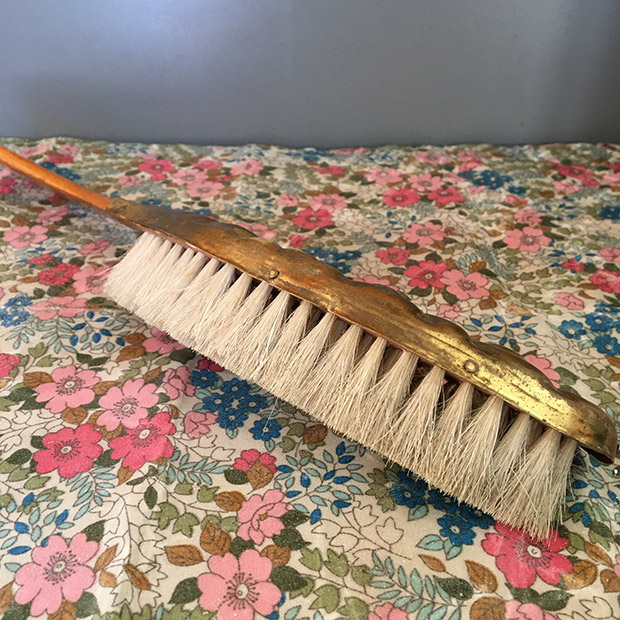 Speaking of our family table, behold my beautiful ‘antique’ table crumb brush, recently bought on TradeMe for $1. I thought using this would make me feel like a waiter in a posh restaurant as I briskly swept pesky crumbs away between courses. Perhaps having a pressed damask tablecloth and paying customers helps, because sweeping crumbs off 1950s formica is still a fairly joyless task. Still, it’s got to be more hygienic than a grubby dishcloth, don’t you think? I had the full Royal Family set of these – Her Maj, Philip, Charles, Anne, Andrew and Edward – but in case of art imitating life, only the Queen and her sensible daughter have endured. (Actually, I still have the Andrew spoon but I refuse to let him out of the box, for obvious reasons.) These were another late-night TradeMe find and have brought me and various dinner guests great joy. These are not just any paltry poultry shears, these are ‘Rost-frei’ Solingen Qualitäts Geflügelschere (that’s rust-free Solingen Quality Poultry Shears in case your Deutsch isn’t up to much). My parents acquired these marvels of German engineering in the early 1980s and they’re still box-fresh (I still have the box!) Spatchcocking a chicken is a breeze when you’ve got these in hand.

My parents had a range of pro-tools for chicken cookery, including a benchtop rotisserie called ‘the Wig-O-Grill’. I’m not sure what happened to that, but its use was always tied to some kind of celebration. The shears, by contrast, can be used any day of the week. 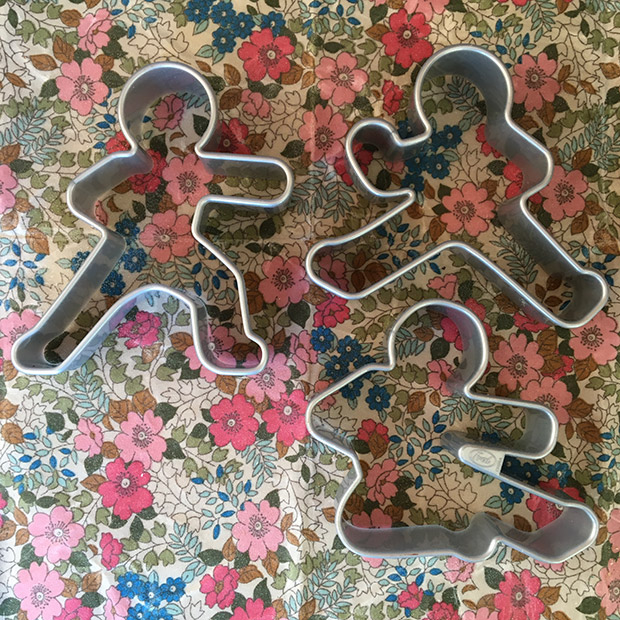 Why make ordinary old gingerbread biscuit people when you can make ginger ninjas? 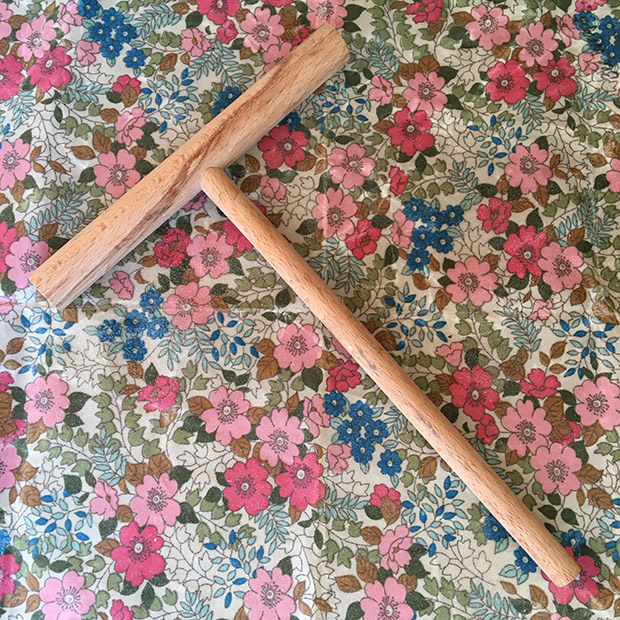 I got a bit obsessed with these tools in France last year, especially after watching one of my daughter’s classmates using one while expertly making crepes at a gourmet market on a lazy autumn afternoon. I think it helps to have a huge, heavy cast iron griddle to make the crepes on too, because I can’t seem to work this as nimbly as she did. Maybe I need more practice? In any case, this makes me happy every time I see it lying neatly in the drawer. 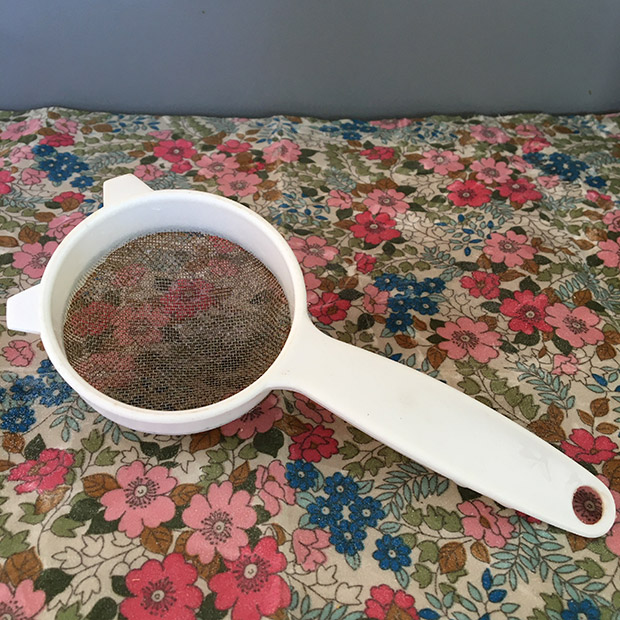 I’m inordinately fond of this humble baby sieve. It came from my mother’s kitchen, where I think it was principally used when pouring tea (she had a posh one too, but this one got used more often). I use it for tea leaves occasionally too, but mostly it’s handy when dusting icing sugar over things, or catching citrus pips when squeezing juice. If I’m ever taking a cake somewhere that needs a shower of icing sugar on top on arrival, I take this sieve too (other people’s kitchens can’t be trusted.) 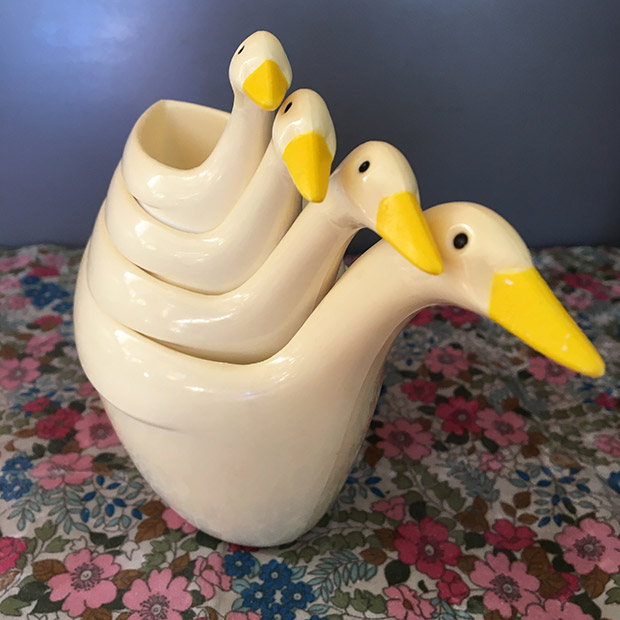 Pro bakers will tell you that exact measurements are crucial. This may be so, but are scales and precision measuring cups as fun as this gaggle of geese? My sister-in-law gave me these and I dearly love them, for their form as well as their function. They remind me of matryoshka dolls – it’s a shame there’s not a tiny golden egg that fits into the smallest goose. 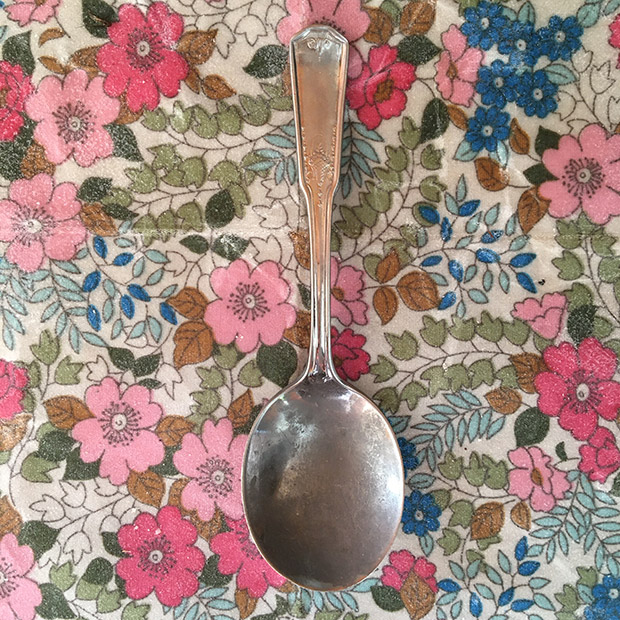 As a small baby, I apparently brought great shame on my family by stealing this silver spoon from a school prize giving afternoon tea at St Patrick’s College, Silverstream. I have no memory of this event (in hindsight, I wonder now if my brothers made up this tale to divert parental interest in their lack of prizes?) but obviously I was determined to find out what it was like to be brought up with a silver spoon in my mouth. Alas, I should have chosen more wisely: this one is mere silver plate. 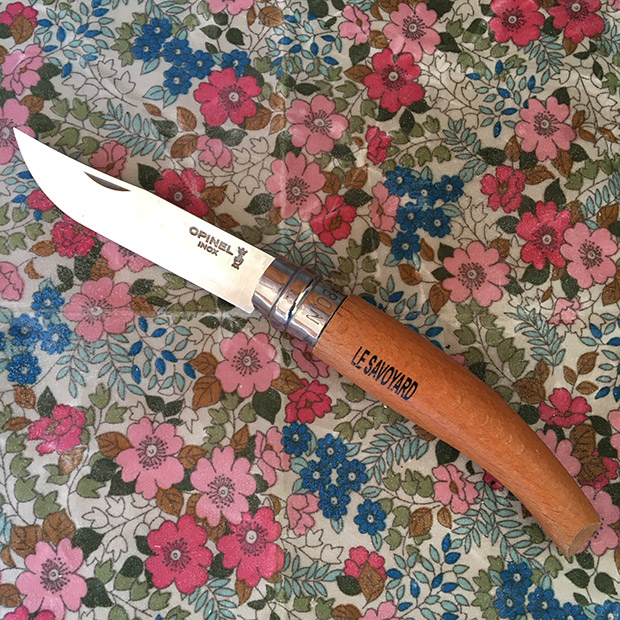 During a seven-month European odyssey last year, we had a lot of ‘car picnics’. While it’s easy to tear off pieces of baguette and stuff them with pre-sliced cured meat, we needed a knife for cheese and tomatoes. This beauty cost 9 Euros, folds safely into pocket-size and never gets blunt.

My one fear was that I’d accidentally leave it in my handbag when getting on a plane, but I managed to get it back to Aotearoa in one piece. It’s the best knife we own, even if it’s not going anywhere these days.

What are your favourite kitchen tools?

This column is dedicated to the memory of Anna Tait-Jamieson, dedicated fan of mono-use kitchen tools, who was Taste editor of NZ Life & Leisure magazine 2011-2018.

Lucy Corry’s Blog: Is life too short to grate a carrot?