Lucy Corry’s Blog: The rise of the Splayd


Lucy Corry encounters a historical figure in the world of cutlery.

Yesterday, while rifling through the cutlery drawer, I had an epiphany. No, it wasn’t: ‘I need to get out more’, though that would be apt. Nor was it, ‘a-ha, I have found the cheese knife!’ (I’m still looking.)

Instead, as my fingers closed around a group of embossed silver handles, I remembered I was the proud owner of an eating implement that’s ripe for recognition. Dear reader, let me (re)introduce you to the Splayd.

The splayd is a clever hybrid. Neither fork nor spoon, it enables one-handed eating in an efficient and elegant way. A well-designed one can even (up to a point) act as a quasi-knife, if the outer edge is curved at the right angle. 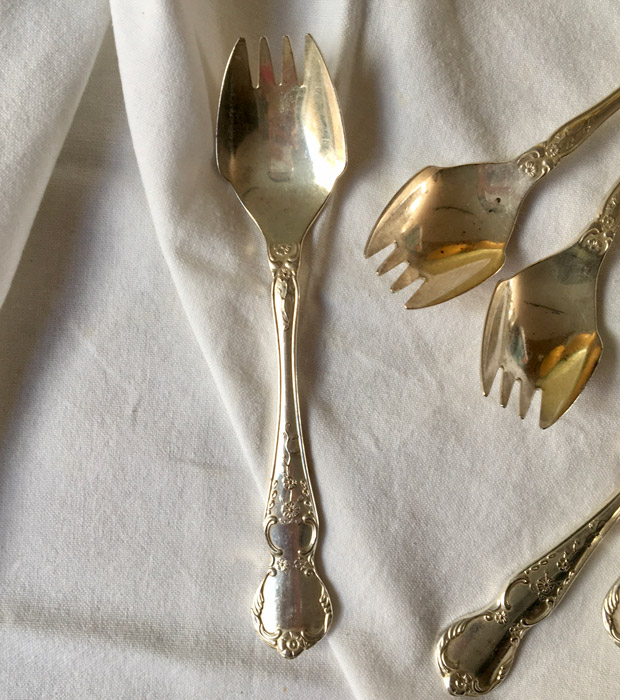 These (pic above) are the remaining members of a set of splayds, or sporks as they are also known, that belonged to my mother. They’re silver-plated Rodd ‘Camille’, which were made in Australia between the 1950s to early 1970s. Perhaps this is why I think of the splayd as a very 70s sort of implement — a useful tool for buffets and ladies-a-plate functions.

At home, we used them when eating ‘chicken a la King’ (chicken in a creamy sauce), which I thought was the epitome of fine home dining. Chicken a la King was cooked in the orange CrockPot, then served on my parents’ Mikasa dinner set (which we only used for special occasions – ordinary Crown Lynn did for everything else).

However, it turns out that the splayd’s origins pre-date my childhood memories. While there’s some dispute over its origins, historians generally agree that various forms of this hybrid utensil were invented in the late 19th century.

When the owl and the pussycat dined on mince and slices of quince in Edward Lear’s famous poem, they’re now widely understood to have been using a spork (though admittedly ‘runcible spoon’ has a better ring to it). In the 1940s, Australian William McArthur ‘invented’ the splayd after seeing women struggling to juggle food and cutlery at parties. His design went into mass production and became the utensil du jour. Nearly five million splayds were sold in 52 countries until they fell out of fashion in the 1980s.

They’ve never been taken that seriously, but sometimes it seems the splayd or spork is the victim of its own success. Because it’s so multi-purpose, various hardwearing versions are popular with campers and trampers.

Splayds are seen as the tool of last resort; of people who don’t know or deserve better. Cheap and poorly designed plastic versions are found in institutions (schools, hospitals, prisons) and fast-food outlets – where table manners matter less than the shovelling in of food as quickly as possible. In 2018, a San Francisco news website reported that an 18-year-old woman was taken to hospital with minor splayd-inflicted injuries after she was attacked by four others while ‘dining’ at a 24-hour food joint in the early hours of the morning. If they’d been using regular cutlery, the results could have been much worse.

Anyway, I think the current state of the world means that the splayd’s time is surely due to come again. ‘Bowl food’, a Goop-like term that encompasses everything from smoothies to soups, noodles to nachos, is everywhere.

A common fork can’t scoop up every last grain of rice or wriggly tail of quinoa; using a spoon renders you powerless when eating noodles. One-handed eating (especially when your other hand is wrapped around a phone) isn’t going anywhere. If you want to get ahead of the curve, get a splayd.

Lucy Corry’s Blog: What you knead to know about hot cross buns