Life without cheese is no way to live. And if lockdown limits its supply, thou shall make it from scratch, says Lucy Corry.

In my 20s, I had a brief flirtation with veganism. It was inevitable really – I was impressionable, skint and had a vegetarian artist flatmate. We made gallons of soup, ate a lot of cake and drank some very questionable wine. Having an outdoors fire bath and two sewing machines more than made up for not having TV.

Looking back, I probably could be living that way still if it wasn’t for cheese. For me, a life without cheese is no way to live. I love cheese the way other people love fancy cars or shoes. Ripe, stinky, raw milk brie, jagged slabs of aged cheddar, fluffy spoonfuls of fresh ricotta – I love it all. Cheese occupies a starring role in my fridge and in what we eat.

My dearest friends are ardent cheese lovers and I sometimes wonder if we would be so close if they weren’t. “Come for dinner,” a friend texts me. “I’ve got cheese.”

During lockdown, running out of cheese was my household’s major concern. We could ration the toilet paper and we never got low on bread, but when the cheese supplies started running low everyone got twitchy. A lack of cheese put serious limitations on our ability to make toasted sandwiches or transform leftovers. While we sometimes joked about investing in a house cow, I never seriously considered home cheesemaking until I met an amateur Auckland cheesemaker who has become something of an expert. The multi-sensory splendour of a good cheese shop is one of life’s true joys.

Bri di Mattina has home cheesemaking down to a fine art. She’s won numerous medals over the years at the annual New Zealand Champions of Cheese Awards and to her, making cheese is no harder than making sourdough or preserving.

“Cheesemaking is not as mysterious as it seems,” she says. “It’s really only two ingredients – milk and a culture – with a million different methods!”

My little raw milk, kefir cultured cheese is ready – not at all perfect, but not at all bad! Flavour has so much more depth !! Learnt these new skills @theblacksheepschool 🤗

The aptly-named Bri was born to make cheese. Her Italian heritage meant she was given medicine in a spoonful of ricotta with honey or lemon as a child – “when you think about it, ricotta is a really good thing for someone to have if they’re not feeling well”. When she grew up and trained as a chef Bri always wondered why good fresh cheeses were so hard to buy in New Zealand until she realised that the Italian community of old simply made their own. Using her own experience and a precious collection of recipes from her nonna, she rolled up her sleeves and got stuck in.

“It’s only in the last 10 years that we’ve been able to buy really good fresh cheeses so I decided to make my own,” she says. “The biggest hindrance is actually getting started. It’s not as complicated as it looks and making your own cheese is very satisfying. The flavour and the freshness is just so different.” 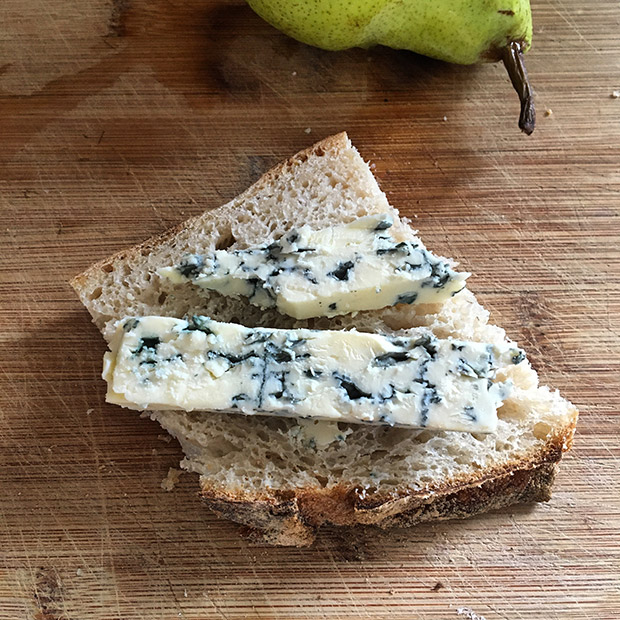 Bri says fresh cheeses like ricotta and mascarpone are the best place to start because the results are almost instant. She likens cheesemaking to gardening: it can be as simple or as complex as you want.

“To me, it’s like trying to describe to someone how to make whipped cream. If you were to try to explain that to someone, that the process depends on the cream and the speed of the beaters and how you want it to get to a certain point but no further, it would all sound too scientific and difficult. Making cheese is the same. You just have to start and learn the feel of it.” Of course, there are some basic rules. Cleanliness is paramount (but don’t use anti-bacterial sprays because they’ll impact the culture and ruin the cheese). Use ‘farmhouse’ (silver top), unhomogenised milk and filtered, boiled or bottled water. Invest in a thermometer and just ease into it, Bri says. “It’s like a form of mindfulness, or meditation. You have to slow right down.”

With that in mind, here’s the way I make mascarpone. I’m not for one minute claiming that this is authentically Italian, but it’s the way my mother made it and it works every time. All you need is cream, tartaric acid, a thermometer and a dash of patience.

Pour 1 litre of cream into a bowl suspended over a pot of simmering water. Heat slowly, stirring occasionally, until the cream reaches 90C. When this happens, add 1/4 tsp tartaric acid and stir for 30 seconds. Remove the pot from the heat and stir slowly for another two minutes. Remove the bowl from the pot and leave to cool to room temperature.

Unless you’re in a very warm climate, you can safely leave the cream at room temperature for about four hours. By this time the cream should have thickened considerably. Give it a stir, then cover and put it in the fridge for at least three hours before using – ideally overnight.

If you want it to be very thick and firm, you can always strain it through a layer of cheesecloth. The resulting cheese will keep for more than a week in the fridge (but I’ve never had a problem with eating it all up before then).