Lynda Hallinan’s Blog: Are we halfway there yet?

In 1992, I did something I’ve never done before or indeed since. I went to the cinema and saw the same movie seven times. What was this fascinating flick, you may well ask? It wasn’t Bram Stoker’s Dracula or The Bodyguard or Reservoir Dogs or Wayne’s World or A Few Good Men or Sister Act or even A River Runs Through It, the film that turned Brad Pitt into a bona-fide Hollywood hunk. No, it was Baz Lurhmann’s directorial debut, Strictly Ballroom.

Like Muriel’s Wedding (1994) and The Castle (1997), Strictly Ballroom became an instant Aussie classic. It’s a rom-com retelling of Cinderella in sequins and glitter, in which bepimpled and bespectacled beginner ballroom dancer Fran (Tara Morice) wins the heart of quick-stepping champion Scott (a particularly perky-buttocked Paul Mercurio).

Scott is a rebel with a cause – he wants to dance non-federation steps at the Pan Pacific Grand Prix Championships – but he hasn’t got the guts or heart. Before dowdy Fran gets her man, she gives him a tongue-lashing in Spanish. “Vivir con miedo, es como vivir a medias!” she says. Her family motto – “A life lived in fear… is a life half-lived” – was the movie’s tagline. 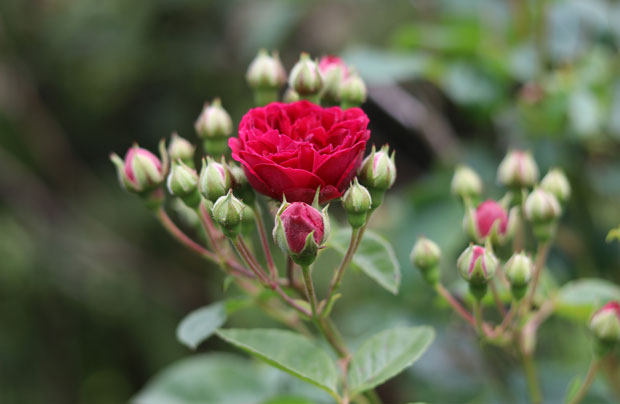 The delicious — to pet lambs — spring buds of the rambling rose ‘Chevy Chase’, a vigorous climber for trailing along farm fences.

After three months in Auckland’s interminable lockdown, I have to say that a life lived at home is also starting to feel a bit like a life half-lived. For starters, my hair is now half-blonde and half-mousey brown with grey streaks.

“You’d usually pay good money for balayage like that,” joked a mate on Instagram when I posted a photo of myself posing in a strawberry frock in the fields of the Clevedon Strawberry Farm. (Being rural, I initially thought she was talking about the bales of barley straw laid between the rows.)

Everywhere I look I see half-finished projects that have come to a halt due to a lack of either materials or motivation. My shepherd’s hut, undergoing a rustic renovation into a cute little log cabin, is only half-clad in timber rounds from our old cypress shelter belt because I ran out of tubes of heavy-duty adhesive. And only half of the old chimney bricks we’re recycling as entrance steps to the hut have been cemented into place, as my husband lost his bricklaying mojo.

Taking our sweet time to finish DIY projects is usually a good thing as more time planning means less time making dumb decisions. But try telling that to my better half, who disembarked his digger and went off in a huff when I asked him if we could possibly dig up the driveway (for the second time) and move it one metre to the right in order to line up with my new grove of silver birches (Betula ‘White Spire’). Ilex crenata makes an excellent hardy evergreen hedge. Or at least it does if pet sheep — such as Freckles and Caramel, Lynda’s children’s Ag Day pets — can’t reach through and chew gaping holes in the lush foliage.

The American author and 1938 Nobel Prize laureate, Pearl S. Buck, once said that “every great mistake has a halfway moment, a split second when it can be recalled and perhaps remedied”.

Sadly, having decided to transplant a tall hedge of Ilex crenata around my pet lamb paddock, I was well past the halfway moment before I realised that I’d made a fundamental error. Although Ilex crenata is a marvellous smooth-leafed holly species that leaves blight-ridden buxus for dead as a formal hedge, its foliage is also a gourmet treat for sheep.

I miscalculated how far Freckles and Caramel could crane their greedy necks sideways through the fence railings and consequently the little buggers ate half the back off my fancy hedge. (To add insult to injury, Caramel also did a bunk and – in the literal shake of a lamb’s tail – scoffed all the buds on my rose bushes.)

I have half a mind to serve her up as a Sunday roast, except I’ve temporarily denuded most of my mint plants inventing experimental cocktails and spritzers for post 1pm-press conference “picnics”. (Having always been a glass-half-full sort of girl, I’m forced to concede that my glass is more often half-empty these days because I’ve guzzled the rest of it.)

Meanwhile my vegetable garden is only half-weeded, the laundry mountain on our sofa remains half-folded (“The summit is just a halfway point,” said the climber Ed Viesturs) and only half of the seedlings I’ve sown in trays have actually made it into the soil. 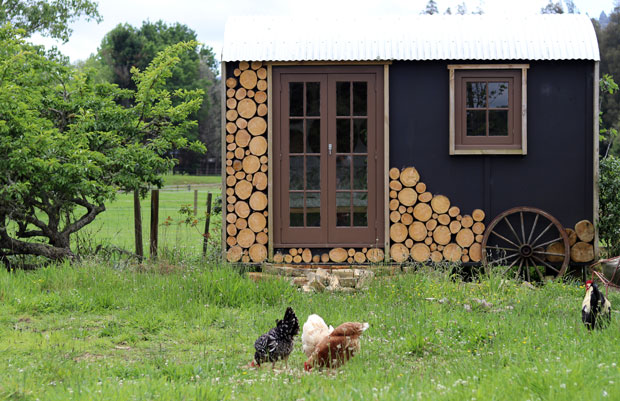 Lynda’s log cabin lookalike. Or at least it will be when she can get back to the hardware store for supplies.

If I’m being honest, the only creative lockdown project I’ve completed, from go to whoa (aside from an eighth viewing of Strictly Ballroom with my two boys, who thought the plot quite bonkers) is the construction of a 100m long by 45cm high rabbit-proof chicken-mesh fence around my new wildflower meadow.

While I have visions of a joyful border of sunflowers, statice, heleniums, single-flowered dahlias, rudbeckias, leonotis and tithonia, all the bunnies can see is a smorgasbord of succulent seedlings begging to be munched.

The bottom edge of the netting has been conscientiously bent and buried in an L-shape so the rabbits can’t burrow under it, although I’m yet to find an effective way to stop my free-range chooks, who are particularly partial to marigolds, simply flying over the top.

After all these weeks of a half-hearted existence stuck at home, can you guess how much I am looking forward to the prospect of going shopping for plants, Gorilla Grip and a giant roll of bird netting?Wholeheartedly.