An ardent gardener loses her patience and weaves a little magic with garden prunings.

In a late-summer garden, patience isn’t necessarily a virtue. Patience is all noble and grand when I’m waiting a few days for seeds to sprout, a few weeks for cuttings to root, or a few months for spring bulbs to bloom. But when I’ve been waiting in vain for a pomegranate tree, peony tuber or giant madeira parsley palm to do its thing, my patience can impatiently morph from virtue into violence.

“Beware the fury of a patient man,” wrote the English poet John Dryden in Absalom and Achitophel, a rhyming poem from 1681 that runs 7781 words long in 515 heroic couplets, enough to test the patience — and iambic pentameter — of any high school English student.

For the poetic pedants, I beg forgiveness for an extra few syllables, but were I to slip a fresh couplet into Dryden’s poem, it might read, “Beware the fury of a once-patient woman, clutching a wee chainsaw to her bosom.” 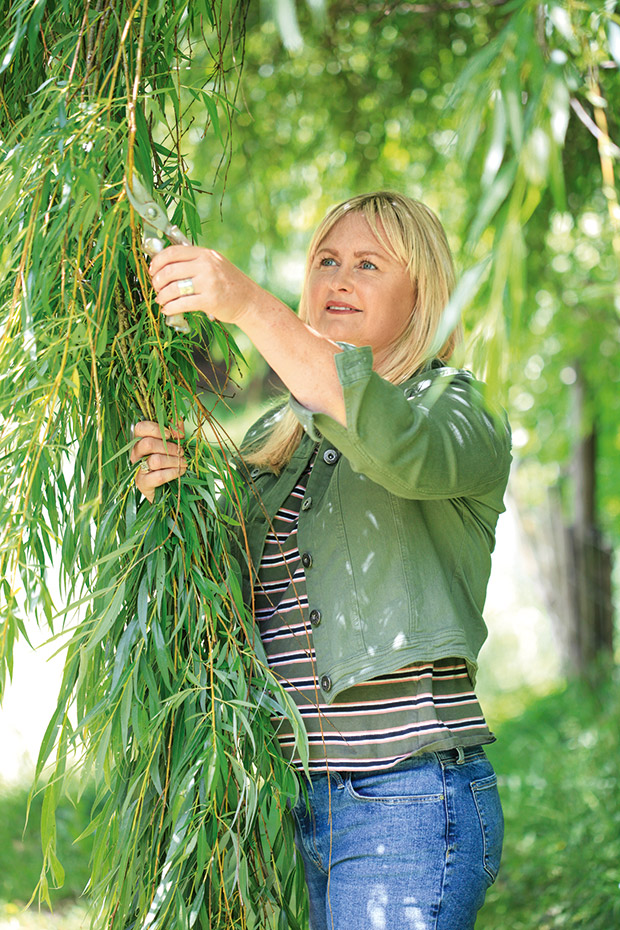 While she waits for her basket willow coppice to prosper, Lynda harvests long, pliable strands of weeping willow from farm trees.

I treated myself to a mini chainsaw (a cordless battery-powered Stihl GTA 26 Garden Pruner) for Christmas and, ever since, I’ve been impersonating Leatherface from The Texas Chainsaw Massacre, threatening unproductive and overgrown trees and shrubs with that classic slasher film’s tagline: “Who will survive and what will be left of them?”

Eleven autumns ago, I visited the Māpua orchard of long-time Tree Croppers and well-known wood turners Anne and Bob Phillips, who served up snacks of roasted homegrown hazelnuts and fresh almonds with flesh as sweet as marzipan.

I flew home inspired to plant my own nuttery of almonds, walnuts, chestnuts and hazels. (But no macadamias; we have a plague of fat rats already in residence and I see no need to abet their greed.) 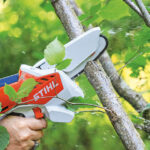 A Christmas gift to herself — a battery-powered “ladies’ chainsaw” that makes short work of any branches that are too big for long-handled loppers. 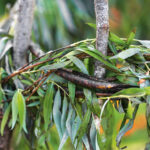 Ten winters ago, I planted 20 almond trees in my orchard and dotted a trio of ‘Rex’ walnuts around my lawn. I flanked the path to my vegetable garden with five chestnut trees on the sunny side and a hedgerow of hazels in the filtered shade of a fledgeling cypress shelterbelt.

Nine summers later, none of these locations has proved ideal. Our prevailing sou’wester punished the almonds in the paddock while the nor’easter that rips up the Hunua Valley took out two of my three walnuts and left the third bald on top with Friar Tuck sideburns. Lynda used her longest, straightest hazel branches to fashion a rustic teepee frame for climbing flame lilies (Gloriosa rothschildiana), weaving hula hoops of weeping willow stems through the uprights to give it strength.

The chestnuts cropped well but dropped their beastly burrs all over the path (a painful lesson for a woman who mostly gardens in jandals), and the hazelnuts have been a complete waste of space.

Despite planting a mix of hazel varieties — ‘Alexandra’, ‘Ennis’, ‘White Heart’ and ‘Merveille de Bollwiller’ — I’ve rarely seen a cobnut. One year, I staged a pollination intervention, gently rubbing the phallic pollen catkins over the teeny-tiny pink flowers. It did meet with success, of a sort; I picked seven nuts that summer.

But last season, a single nut. Had I imagined Anne and Bob telling me hazels were a doddle to grow? “They’re easy to grow in full sun,” Anne pointed out as she chuckled at my rose-tinted memory of their profligate hazel hedgerow. “To be honest, we just bunged those in to cover up the unsightly water tanks,” she said. 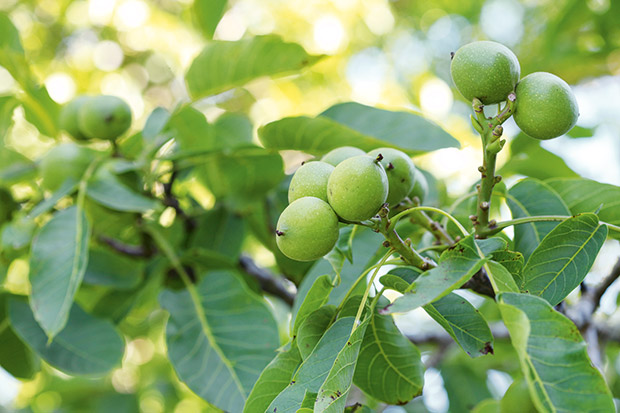 Of all her nut trees, only one — a ‘Rex’ walnut — has earned its keep in this gardener’s Hunua spread.

Rather than asking my husband to let the light in by turning our shade-casting shelterbelt into a mountain range of mulch, I decided to repurpose my hazels as garden stakes and teepees. In a large country garden, there’s no such thing as green waste.

A fallen tree is pounced upon for firewood or, better yet, blanketed with soil to create a hügelkultur bed (a no-dig raised bed) of biodiversity. To make a rustic woven hurdle fence in situ, hammer straight, sturdy branches into the ground at 60-centimetre spacings, then weave slender branches in and out of the stakes. After a few layers have been woven in, the hurdle will hold itself together firmly.

Because hazels (Corylus avellana) are straight shooters, sending up a clutch of whippy stems rather than a single trunk, they don’t mind being knocked down to their knees. Since the age of the Druids, they’ve been coppiced for walking sticks, shepherd’s crooks, fencing, water diviners and basket handles.

Four winters ago, I took a class at Forgotten Arts (forgottenarts.co.nz), Maureen Conquer’s creative school of lost crafts in neighbouring Clevedon and learned how to weave a hedgerow basket from garden prunings.

My first basket, made from brambles of roadside briar roses, strands of ivy, wisteria vines and weeping willow, turned out as lopsided as my first attempts to throw a pot, but I cherish it nonetheless.

Willows get a bad rap, and deservedly so, for encroaching on our river ecosystems and causing erosion and flooding. So the irony isn’t lost on me that while on one hand I’m helping to evict the willows that clog our local Wairoa River and its tributaries, on the other I’m cosseting a baby coppice of basketry willows. Lynda checks on the root growth of her cuttings. Willow cuttings strike so readily that even if you accidentally poke them into the ground facing the wrong way up, they’ll bend their buds and grow roots from their buried heads. New-season willow stems are naturally rich in indolebutyric acid, a plant hormone that stimulates root growth, so soaking cuttings of other plants in willow water can significantly improve their strike rate.

During the lockdown, I ordered several dozen willow cuttings from master craftsman Peter Greer at Willow Works in Golden Bay (willowworks.co.nz). I had visions of a green tunnel of Salix viminalis ‘Gigantea’ and a living trelliswork of ‘Black Maul’, ‘Green Dicks’ and dwarf ‘Nana’.

Meanwhile, the rabbits had visions of a midnight feast and chewed off all the new shoots as soon as they broke bud. “Let what comes come, let what goes go,” said the famously patient Indian Hindu sage Ramana Maharshi.

But I had a better idea. I took my mini chainsaw to my hazel hedgerow, weaving its barren branches into a handsome hurdle fence that’s just high enough to keep all those fertile bunnies and hungry hares at bay.

Lynda Hallinan’s Blog: You say tomato, I say make ‘mine a double’