My only sister Brenda and I were born on the same day, one year apart. We shared birthday parties and birthday cakes (one half each). We were given the same toys every Christmas and, as children, Mum often dressed us in matching home-sewn smocks. “Oh,” strangers would coo at us, “are you twins?” While I was chuffed by the assumption, my big sister was rather less amused.

Sisters are both your mirror and your opposite, said author Elizabeth Fishel. I’m blonde; my sister is brunette. I’m a writer, she’s a teacher. I’m taller, louder, less tolerant. She’s kinder, funnier, more forgiving. But when we were children, we fought like the warrior poets of Braveheart. We pinched and pulled hair and held petty grudges right up until our mid-twenties, when Brenda unexpectedly asked me to be one of her bridesmaids (years later she confessed that my mother told her to do it). 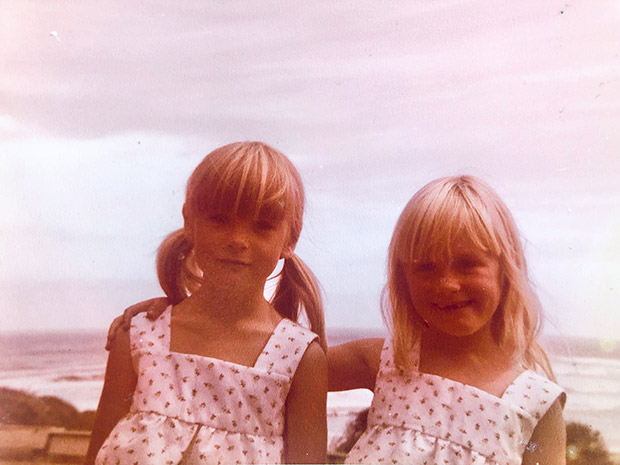 Lynda and her big sister Brenda (left), dressed like twins, at Port Waikato circa 1980.

Sisters, said Marilyn Monroe, make the best friends in the world. (The sort of best friends you can’t get rid of, countered Amy Li). We’re great mates now but as teenagers, we took different paths.

Brenda went to Waikato University, while I went to Auckland. She lived in Italy and France, while I got a job and a mortgage. She got married and had kids 10 years ahead of me. I was drinking cocktails while she was raising her children; if I could rewind time I’d try to be the sort of aunt that she is to my boys.

When we were younger we were, as all the gift shop coffee mugs say, different flowers from the same garden. But which flowers? When I asked Brenda to pick a bloom that best fit her personality, she consulted Google, stumbled across this article and chose to be a sunflower: cheerful, informal, optimistic, easygoing and free-spirited.

“You’re a peony,” she added. What a compliment! Peonies apparently suit emotional, caring, passionate people. “A peony is most appreciated by romantics who enjoy their delicate beauty,” I read. 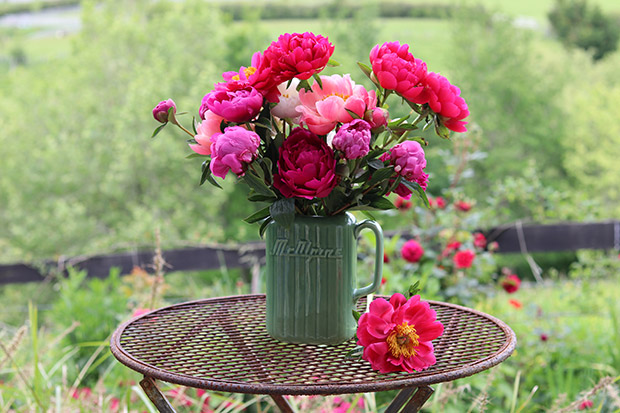 If I’m going to be compared to a flower, says Lynda, why not pretend to share the attributes of a gorgeous spring peony?

But Brenda was actually taking the mickey out of my messy house and hoarding habits: “Chances are the person who prefers this flower has a home that is warm and welcoming, full of antiques and memorabilia, of porcelains and paintings and mirrors.”

Our tastes are the same but different. We both like sweetcorn with butter. Brenda hates Mum’s boiled ‘Scarlet Runner’ beans, whereas I find them comforting; she likes pumpkin soup, whereas it makes me gag. And that, dear reader, is how this story of a sisterly bond segues into a gardening tale.

In one of the earliest examples of companion planting, Native Americans grew runner beans, corn and pumpkins (or squash) together in what is known as the “three sisters” method. Rather than fostering sibling rivalry in a winner-takes-all resources grab, the three sisters method encourages a familial symbiosis, as all three plants grow together for their collective greater good. Two of the three sisters (Lynda’s beans are still making their way up their frames).

Sowing runner beans at the base of a corn crop means the bean vines get a supporting leg up into the sunlight. As they climb their corn stalk stakes, the beans tie themselves into knots, supporting the corn in a net of twisted tendrils, the way string holds the stuffing inside a rolled roast.

As the beans grow, they also capture or “fix” atmospheric nitrogen and store it in nodules along their roots, literally harvesting fertiliser from thin air to replenish the soil and feed their bedfellows.

Large-leafed pumpkins and squash, meantime, shade the soil around the roots of the corn and beans, enabling everyone to keep their cool in summer while also conserving soil moisture. As a bonus, their golden trumpet flowers also attract pollinators for the beans, while their prickly leaves keep foraging pests at a safe distance from the corn cobs.

Or at least that’s the theory.

During the lockdown last spring, I decided to fill all the empty beds in my vegetable garden with “three sisters” plantings of corn, pumpkins and beans. I figured that as soon as Auckland’s borders opened, we’d be off to the beach, so it made sense to plant late-maturing summer crops that could look after themselves until we returned.

I sowed half my seeds in trays in early September, and kept the rest to sow direct in early November. (I like to have a foot in both camps, just in case the weather is better or worse than expected). In trays, I sowed ‘Queensland Blue’, ‘Turk’s Turban’ and ‘Golden Nugget’ bush pumpkins, along with the heritage corn varieties ‘Glass Gem’, ‘Black Navajo’, ‘Painted Mountain’ and ‘Mini Strawberry’ for popping. 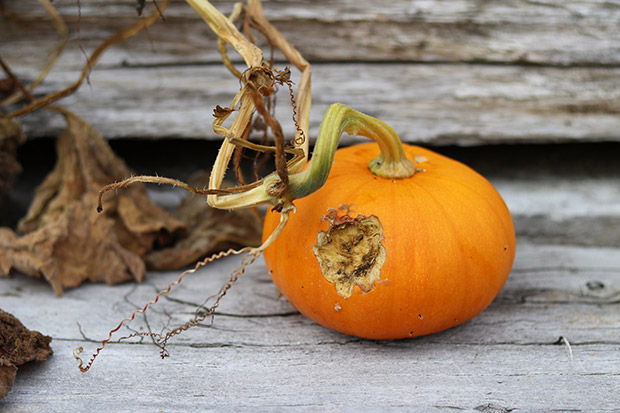 I prepared all the beds with my mate Dave’s help (he wields his small digger like a giant rotary hoe), turning over the fallow soil, digging in mounds of compost and a generous scattering of fertiliser, and then I waited for rain. When it came, I plugged a packet of pumpkin seed around the edges of each 2m x 2m bed, and direct sowed a block of corn in the middle.

So much for sisterly cooperation: the pumpkins immediately outsmarted their slender siblings, germinating more quickly and running rampant within weeks, while the corn was pecked at by pukeko, blackbirds and pheasants. (At least the ‘Scarlet Runner’ beans, being perennial, were already in residence; all I had to do was protect their crowns with netting to stop the rabbits munching off the new growth as it emerged.)

Soon my vegetable garden was wild with weeds and rampaging pumpkin vines but the corn held its ground and the beans bloomed and everything seemed to be going gangbusters. By Christmas, my ‘Golden Nugget’ crop was almost ready to harvest. This baby bush pumpkin takes just 6-8 weeks to mature and produces half a dozen bright gourds per plant, making it perfect for pots and small plots.

And then a curious thing happened. The ‘Golden Nuggets’ started disappearing. One day there were six on a plant, the next five. Was I imagining things? I was not. One morning, the biggest fruit on one plant had been expertly hollowed, leaving nothing attached to the stalk but a chiselled crescent moon of orange skin. 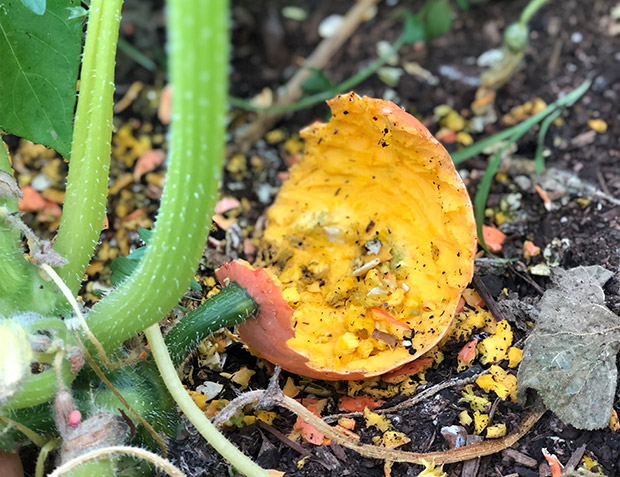 Learning the hard way how to hollow out a ‘Golden Nugget’ pumpkin. First, find a rat.

I set a weasel trap and the next morning: splat! A very fat rat, squashed flat, just a sniff short of the peanut slab I’d baited the trap with. Job done, I went to the beach for 10 days.

While I was away, rats ate every last ‘Golden Nugget’, nibbled my ‘Musquee de Provence’ and ‘Marina di Chioggia’ pumpkins, and left bite marks on every ‘Baby Bear’. I’ve had issues with rodents raiding my pumpkins before, but generally they have the decency to wait until I’ve harvested them.

I phoned my sister to have a moan. She laughed. “Little bastards,” she added, sympathetically.