Lynda Hallinan finds her happy place in a tiny house decorated with op-shop treasures, an abundance of plants and hues of green.

Ever get the feeling you’re living in the wrong era? That you would have been better suited to the so-called “good old days” than the hustle and bustle of this century? I reckon I should have been born in Victorian times, when sentimental suitors declared their eternal affection with apple blossoms and sprigs of come-hither honeysuckle, and well-to-do ladies tittered over their teacups while lolling about on fancy chaise longues.

Who am I kidding? It would have been my luck to end up as an impoverished colonial settler’s wife, eking out a miserable existence raising more children than I had square footage in a draughty cottage in the Antipodean boondocks, just like the dour old ducks in my family’s faded portraits.

My ancestors endured their fair share of shanty houses, which could explain my epigenetic attachment to ramshackle cottages: I’m a sucker for any wee weatherboard whare with a picket fence and a pitched roof, fancy finials and fretwork, a lean-to, and outdoor loo.

In 2019, a cottage that ticked almost all of these boxes came up for sale within cooee of my home in Hunua. Last sold in 1942 to an Auckland furniture-maker, who bought it as a wartime bolthole for his family, the pit-sawn kauri cottage had outlived his elderly spinster of a daughter, but only just. 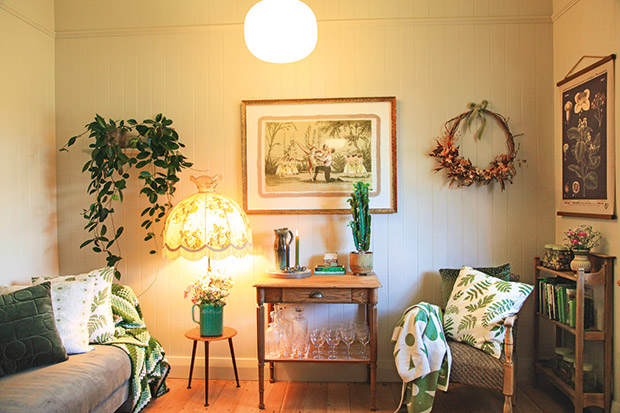 Marketed in “as-is condition”, the cottage wasn’t so much a do-up as done-for. She was in no fit state to live in — unless you were a possum or the neighbour’s three-legged cat — with slumping floors, borer-riddled weatherboards and a front porch scaffolded by thuggish wisteria vines.

The real estate listing called it “cute, iconic and nostalgic” but my husband Jason, who courted me with camellias (symbolizing love, longing and affection according to Victorian floriography) had zero desire to fulfil her needs for “further loving care and much-needed improvement”. Nonetheless, I coaxed and cajoled him with chamomile tea (patience in adversity), wearing him down with marigolds (stubbornness and determination) and tansy (hostile thoughts) until our names were on the title.

Buying the cottage was an impetuous act of sheer geranium (happiness) — I mean folly — which, to be fair, is the absolute best kind of folly there is. Though as far as country houses go, it was less Downtown Abbey or Little House on the Prairie than Rats on a Hot Tin Roof. Or perhaps Hell or High Water, for she sits less than five metres above the banks of the Wairoa River, which surges from an ankle-deep trickling tributary to a four-metre raging torrent in full flood, making for some nervous weather watching on wet winter nights. Lynda’s colonial cottage décor isn’t so much “shabby chic” as second-hand and cheap, she says: almost all the furnishings are pre-loved op-shop or vintage store treasures. The No.1 Auckland hand-coloured lithographic print above the couch (left) was included in the cottage chattels. It was drawn in 1852 by Patrick Joseph Hogan and featured in a popular set of Avon Fine Prints sold in the 1960s.

Three years on, my tiny house is slowly inching towards her scheduled unveiling, as I’ve promised to open it for the Franklin Hospice Garden Ramble. Like the Ship of Theseus in Plutarch’s philosophical paradox, she has been stripped, sanded, rewired, replumbed and repainted, and her saggy bottom has been given a gluteal lift with new foundations and underfloor insulation. But she’s the same charming old gal in spirit.

More stories you might like:
Te Rūnanga o Ngāti Toa Rangatira CEO Helmut Modlik on how Māori values can enhance a venture’s success

There aren’t any mod-cons — no wifi, television, heat pump, not even a kitchen or bathroom to speak of yet — but all 23 square metres of her two front rooms are already furnished with botanical frippery and op-shop finds.

Meanwhile, it’s still a construction site out back (plaster board being rarer than hen’s teeth due to supply chain issues), but who says you have to have walls, doors and a roof that doesn’t leak before you can start hanging pictures, chucking crocheted rugs over armchairs and piecing together jigsaw puzzles over a thermos of tea? She stripped and sanded the bedroom’s original chest of drawers and then upcycled them with adhesive floral décor transfers. The round print is an encaustic or beeswax painting by Studio Reset. “I’m not sure I’d sleep peacefully in here yet — there’s still a rat hole in the corner of the floorboards — but it’s a beautiful spot for slotting together jigsaw puzzles.”

My husband and my father, that’s who. “You’re always putting the cart before the horse,” they tut-tutted at me in unison. “Practicality schmacticality,” I replied, plumping the cushions on my faded green velvet couch, a half-price bargain upon which our adopted cat promptly sharpened its claws.

Everyone who knows me — most notably the staff at the local Resene paint shop — know that green is my favourite colour (so much so that when I opted for a retro yellow colour scheme for our Tairua bach, friends who showed up with green housewarming gifts were taken aback). Still, I’d like to think I’m calming down with my colour choices.

More stories you might like:
50 years of flower farming: Two families harness the power of sunflowers for bird-food company Topflite

A decade ago, my favourite shades of green were bold and bright. Think granny smith apples, double-strength lime milkshakes and the green, green grass of the homely sward of Readylawn we rolled out for our wedding. (My poor bridesmaids, dressed like fluorescent leprechauns in luminous green organza, matched the grass like camouflaged chameleons.) Since then, I’ve flirted with 50 shades of green paint, from ‘Feijoa’ and ‘Peppermint’ through zesty ‘Citron’ and ‘Celery’ to the pastoral freshness of ‘Glade Green’, ‘Clover’ and ‘Paddock’, but I’m going through a more mellow phase these days, favouring muted shades of ‘Grey Olive’ and ‘Sage’.

Given the cottage’s new lease on life, when it came time to paint the front door, I figured ‘Koru’ would be a fitting choice. But in the end’ I settled on the horticulturally rebellious ‘Hemlock’, aka Conium maculatum, that pretty but poisonous cousin of the common carrot.

Luckily, I’m not superstitious. In Victorian times, this herb meant “you will cause my death”, which should give my free-range chooks pause for thought should they insist on pooing on the crooked cottage porch. Ferns are so 2021. I’m ashamed to confess that despite my gardening credentials, I’ve killed most of the ferns I fawned over in NZ Life & Leisure (September/October 2021). But indoor plant fashions are as fickle as fiddle leaf figs; I’ve moved on from monstera and maidenhairs to calathea, hoyas and peperomias.

I‘m rather chuffed with my hoya collection. These evergreen trailing wax plants (seen at left dangling down the chest of drawers behind me) seem near impossible to knock off; all of my plants have survived for months without water. Perhaps that’s the key: treat them mean and keep them keen.

In the United States, the gardening industry’s PR arm, The National Garden Bureau, has declared 2022 the Year of the Peperomia. These succulent subtropicals, also known as radiator plants, come in clumping and trailing forms. Seek out silver-striped Peperomia ‘Watermelon’, shiny burgundy Peperomia caperata or the dangly string of turtles, Peperomia prostrata.

However my current foliage fancy piece, perched on the puzzle table, is the crinkle-cut prayer plant Goeppertia orbifolia (previously known as a calathea). Hailing from lush jungles, it’s quite happy in low light but requires more watering than most.

I only pray I don’t kill it.