“It’s tiny, and I look ridiculous driving it around.” That’s Todd Sisson’s verdict on what his Austin A40 Farina does for his image. “I’m not a big guy, but I look like a giant in it. When my trail bike is parked next to the Farina on the driveway, the handlebars are as tall as its roofline. And if you want to get into the back seat, you have to perform all sorts of gymnastics.”

Did someone force this motoring mortification on him? Certainly not. Todd actively pursued this dinky green Farina — twice. It was parked at the local Clyde garage when it first caught his eye. “I had no idea what it was — I just loved the look of it and thought it was so cool. I don’t think they are cool. It’s just a personal thing — probably some character defect.”

He believed it’d be perfect for his wife Sarah, who’d been on the hunt for a car with a bit of personality. He sent her a photograph which failed to convey the vehicle’s charms adequately, for she replied with: “Nah, I’d feel like a granny driving that.”

A month later, when they were walking past the Clyde garage, Sarah spied that very same nana-wagon and said, “Oh, that car’s cute.” Cute, but just snapped up by some other Farina-fervent buyer. 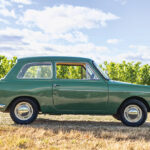 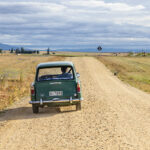 To lift the resulting despond, the Sissons fell into the arms of another old British car: a 1957 Morris Minor Traveller (or “Woody”). They thought it would look almost Farina-good parked outside their Clyde stores (Folklore Fine Goods specializing in homewares, and Sisson Gallery, landscape photography). “The Farina was our first love, and the Morris was a surrogate,” says Todd.

More stories you might like:
Best birthday gift ever? Jill Evans' husband kept the restoration of this Austin 7 Boat Tail a secret for an entire year

When Sarah drove the Morris from Christchurch to Clyde, it further proved its understudy status by blowing up on the Lindis Pass. “The whole engine completely ‘grenaded’.”

Todd managed to rebuild it with some help, but such explosive behaviour didn’t earn this surrogate vehicle any brownie points in the Sisson household. Then, just when the whiff of melting Morris was waning, that absconding Farina came back up for sale at the Clyde garage.

This time they tarried not. It’s safe to say that the merits of this 1962 Austin A40 Farina Mark II are not to be found in its performance. “The steering is garbage by modern standards,” says Todd. 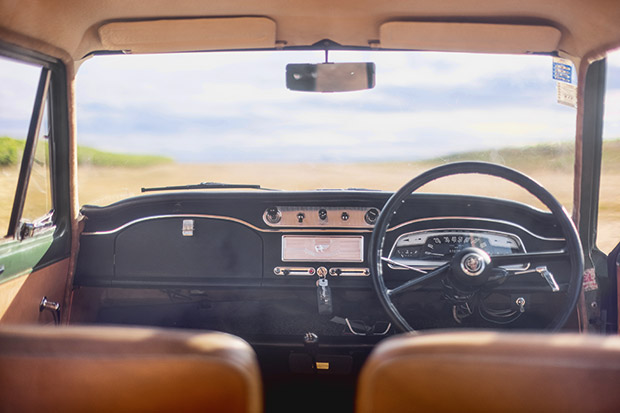 “It has this horrible little worm gearbox design so it’s really heavy. It’s capable of cruising at 70 miles an hour [about 110 kilometres], but you’re flat to the floor the whole time. You’re also deaf when you get to your destination and you’ve exposed yourself to a bit of doom in the event of an accident, particularly given that the braking time is four times as long as in any other vehicle.”

The cool rally-driving lamps Todd bought on Trade Me haven’t helped either: “They don’t make any difference to its lacklustre performance, but they do make it look faster.”

Then there are the onerous maintenance tasks: “You spend your life running around with a grease gun lubing up stuff. If you ever want to feel inadequate, read the owner’s manual of an old British car.”

But none of these foibles seem to diminish Todd’s fondness for the Farina. “I don’t understand why, but I do find it relaxing to drive. There’s something about it that unwinds me. I almost always get a smile on my face because of some completely insignificant achievement the car makes. (‘My god, you’ve hit 60 miles an hour on that corner — you’ve never done that before’ or, ‘Wow, the heater’s actually working.’) In the summer, windows down, you somehow feel more connected to things — more engaged.” 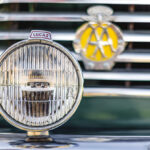 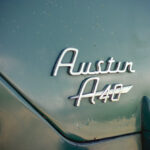 Unlike its dowdy Austin predecessors, the A40 Farina has some Italian style in its British body (actor Sam Neill, a fellow Farina devotee, has described his A40 as a “sexy beast”). It’s thanks to the late Prince Philip, Duke of Edinburgh, that this car has “Continental” chic.

When the Duke was shown new designs and prototypes during a visit to the Austin plant in 1955, he told the boss of the British Motoring Corporation that they looked a bit dull and suggested they outsource styling to someone with a bit of Continental flair — like Battista Farina at Pininfarina.

The Italian automobile designer was promptly hired, and future frumpish forms thwarted. Todd likes this story: “The Duke was dead right about the earlier Austin designs — they were hideous, whereas the Farina was just on the verge of modernity.”

Italian suavity aside, Todd says the A40 Farina’s appeal is more than skin deep. He lists the car’s interior assets with unalloyed pride: “It has a pretty cool dash and speedo. And it has little creature comforts like a working heater and a fan that works and de-misters that will never de-mist the windows — but they do try. And there’s a slot with a big ‘flying A’ for Austin on it, which is where a radio could go.” 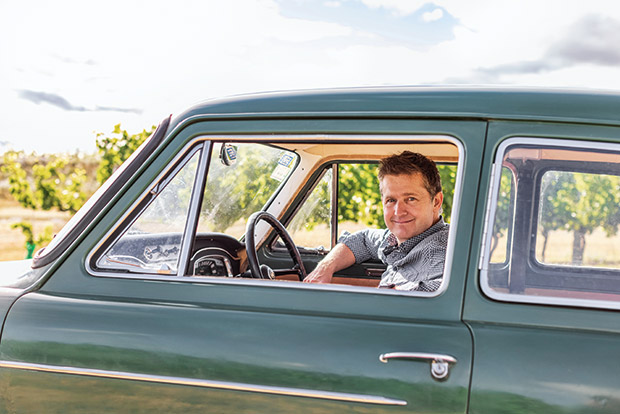 But, mainly, the Farina tugs at an emotional level. “Sarah and I both run on instinct — we just connected with it. It’s the sort of car I grew up in. Psychologists would probably analyze it and say that’s the reason I like it.”

Not everyone is convinced of the Farina’s “sexy beast” good looks, mind. The Sisson teenagers (Jack and India) don’t feel the car’s emotional tug (yet), but that doesn’t stop Todd from carting them around in it: “I do it as a form of punishment — especially for my daughter because she’s usually embarrassed.”

And if he were to stumble on another old British car at the local Clyde garage, might his instinct speak once more to his wallet? Says Todd: “It’s tempting to accumulate them. But two old cars is enough. They’re detrimental to your marriage status.

Rusting cars and unfinished car projects don’t improve things domestically, so I figure I’m better off just having two cars and one marriage. Otherwise, I’ll end up on my own with an Austin Farina, which would not be a good outcome.”