Paul Barclay loves to surf, and there was just one thing he needed to make his life complete.

Robin Flegg flipped back the mat in the footwell under the steering wheel of Paul Barclay’s prized 1963 Ford Falcon XL Deluxe Station Wagon.

“Eh?” he thought and looked a little harder. Fibreglass; a solid sheet of fibreglass. Up until then, Robin had been appreciative of Paul’s sweet ride. For a more-than-50-year-old car, there was surprisingly little rust and what he did discover was in places — in his experience as a restorer of motor vehicles — he would expect to find it.

He had taken off the front guards and found evidence of the vehicle’s first paint job. This implied the guards had never been removed, reassuring him there hadn’t been any frontal impacts and meaning it was a nice straight vehicle. Oh yes, concurred Robin, we have an excellent little car here.

And then, this; this solid sheet of fibreglass. It had nevertheless been well constructed and, as strong as steel and with greater flex, didn’t seem to have twisted or otherwise compromised the original chassis. But still… fibreglass? 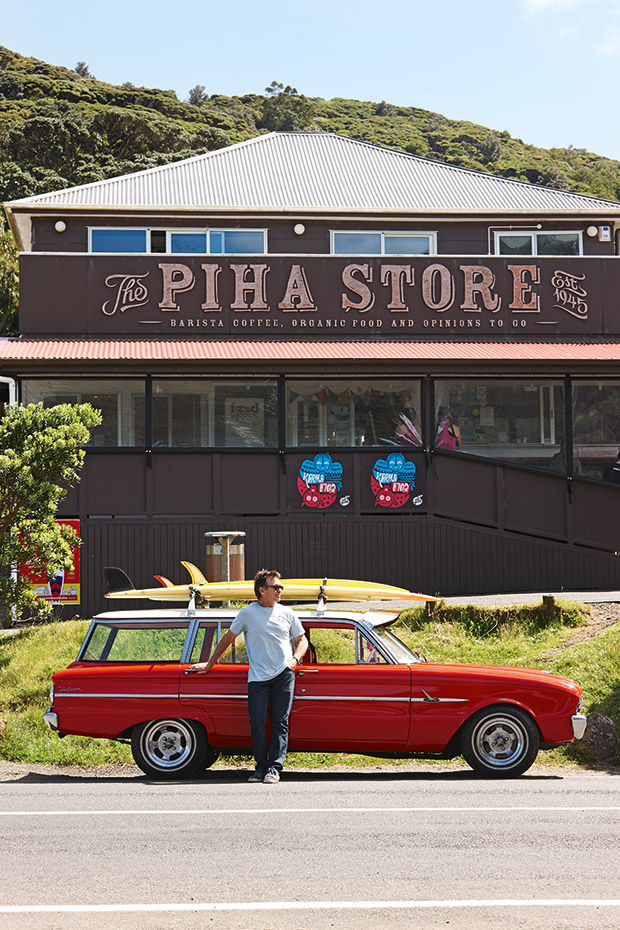 The vehicle had passed WOF after WOF, so the patch had been attached most ingeniously. But it was the only fault, and although an unexpected expense, it was an expense that could be borne.

It had taken Mt Albert-based Paul a decade to get the vehicle this far. The general cost of providing for his family meant he felt there were other places he had to spread his money rather than overhaul his car. Now with the boys forging lives of their own and Paul and his wife, Gayle, nicely settled and squared off, it was an apt time to spend something from the one-day, some-day fund.

And he knew just the person to do it. A friend told him of Whangamatā-based Robin, who had a well-earned reputation for restoring cars and was in great demand. But, now retired, he only took on such work as a winter project. Paul crossed his fingers, and it worked; Robin decided Paul’s car would be one of his projects.

This was the start of many trips from Auckland to Whangamatā taken by Paul. He became Robin’s ‘apprentice’, doing the donkey work. And he loved it. He is a fireman, not a mechanic, and to pull a car to bits and reconstruct it was on his wish-list. He dismantled it, cleaned it, rubbed it down and helped with the reassembling. Some tasks he was not allowed to do, such as rehang the doors. The old hinges are not like those of today. 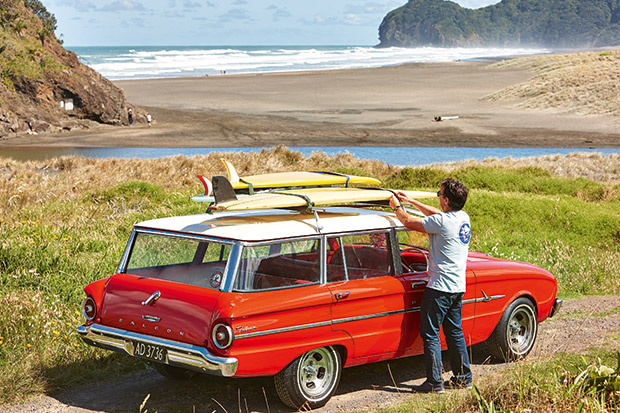 It took patience and skill to make sure the doors sat snugly into their frames — a tweak here, another tweak there — meticulously aligning them with the curve of the surrounding bodywork. It was the same with the guard. Ford jigged the marque each year, but one thing that didn’t change until 1965 was the vehicle’s rounded body.

Where many American cars of the era were space-age sharp and angular, this Falcon is pleasingly rounded, including the three-way curve of the tailgate alone. These compound curves need to be nursed into shape, and it was a meticulous job.

“It would have taken me weeks to do that on my own if I even got it right,” says Paul. “It brought a whole new level to how much I like and appreciate this car — seeing the effort and skill that has gone into bringing it back to its best.”

A bonus to being Robin’s apprentice was that Whangamatā has one of Aotearoa’s best surf breaks, and if Paul ever goes missing, out on a nearby break would be the first place someone would look. It was surfing that led Paul to his vehicle in the first place. 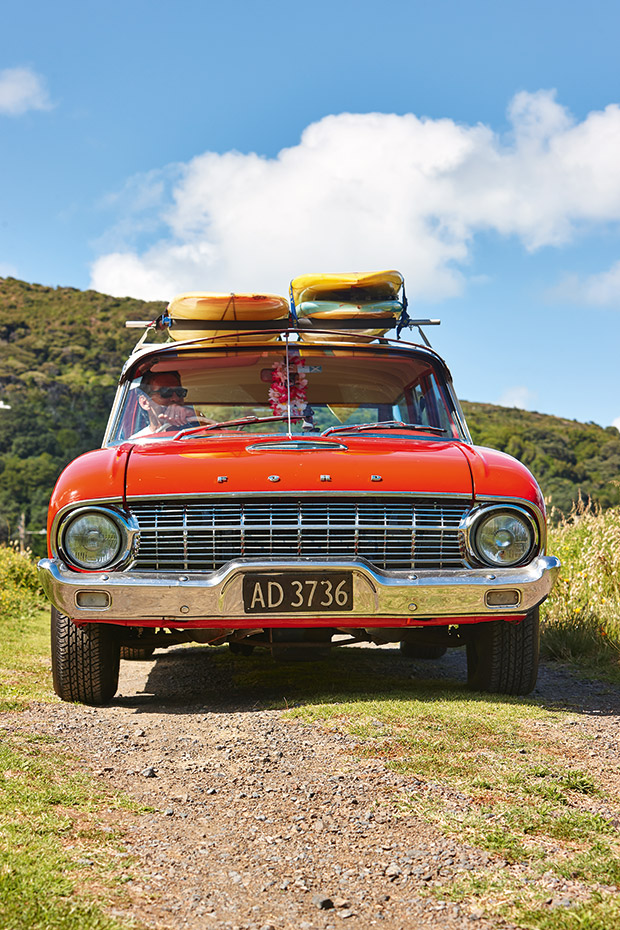 “These were the type of cars that we drove as teenagers off on our adventures around New Zealand chasing the waves. I am still a surfer and continue to love the surf culture of the 1960s. Over the years, I have had Fords, Holdens and VWs as my surf wagons, but I really wanted the Ford Falcon XL 1963. It was reasonably hard to find a good one at a price to meet my budget. I kept a watching brief on Trade Me and, finally, up popped this car in Christchurch.”

Paul couldn’t believe his luck. The vehicle, owned by the seller for 18 years, had been garaged, well protected against Christchurch’s very cold winters and very hot summers. He was so enamoured with his find that he just “went for it”.

He had some online conversations with the seller and took him at his word; then had the vehicle loaded onto a train where it clackety-clacked up to Picton, bobbed across Cook Strait and hit the rails again from Wellington to Auckland. And, luckily, sans the fibreglass that maybe even the seller didn’t know about, the vehicle was just as described.

“I would probably never risk buying something like this again, sight unseen. I was just so excited to finally find the car I had been searching for that I just wanted it in my own garage — now. I was very lucky.”

More stories you might like:
Bean tales: How Crete beans made their way to New Zealand in the name of love

In the end, it took three years for the complete restoration but, on the positive side, the longer the vehicle was in Whangamatā, the more excuses Paul had to enjoy some dalliances with the Pacific Ocean. 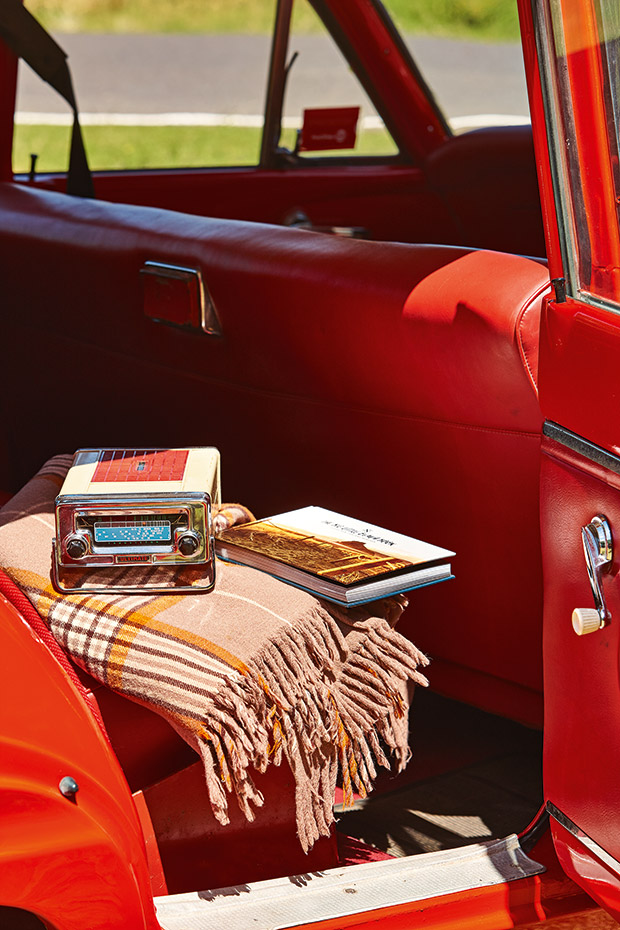 It was exciting to get behind the wheel and bring the car home finally, but unexpectedly, the journey wasn’t over yet. Time off the road is never good for old vehicles, and the WOF inspector turned up his nose and put his thumb down; the petrol tank wasn’t up to scratch.

It was a further two months before the car had a brand-new petrol tank and the coveted WOF. The upgrade also meant there was now a working fuel gauge, putting a stop to anxious journeys, fingers crossed that Paul’s guestimate of the fuel-to-kilometre-to-surf-break ratio was correct.

Paul continued to browse Facebook’s Marketplace, and then one day, there it was, something he didn’t even know his car needed but, once spotted, was essential. The Picnic Portable is an AWA (Amalgamated Wireless Australasia) car radio made by the now more-than-a-century-old manufacturer in the 1960s. Made especially for the Ford Falcon with the marque badge imprinted, the AWA 982-A sits in a cradle under the dash, running off the car’s electrics.

When removed to provide beats away from the Falcon, it runs off six C-sized batteries. It, too, needs a bit of nudging back into top gear, but it is just the sort of aftermarket accessory that makes Paul’s car complete.