The family enjoys an unusually still night on New Zealand’s southern coast. The size of the driftwood feeding the fire gives a clue to the usual conditions.

Southerly gales are something of a symbol in the life of the Hill family. They invigorate their life in a holiday house by the sea and inspire Mark Hill’s distinctive sculptures.

Some families are so annoying. While the rest of us queue at the supermarket and dither over decisions about how to make things look good or force ourselves along to the gym, they manage to make getting fit, fed and fabulous seem utterly effortless. Mark and Monika Hill with their sons Oliver and Nathan are just such a family – funny and fearless and a little bit feral.

They like to relax (if that’s the right word for what they get up to) on the South Island’s nethermost coast. Mark’s an outdoorsy type and the wind and the waves down there are of the strong and exciting variety – just the right sort for a man with a passion for windsurfing, surfing and paddle boarding – and his love of the wind has been translated into more solid form in the sculptures for which he’s become well known. 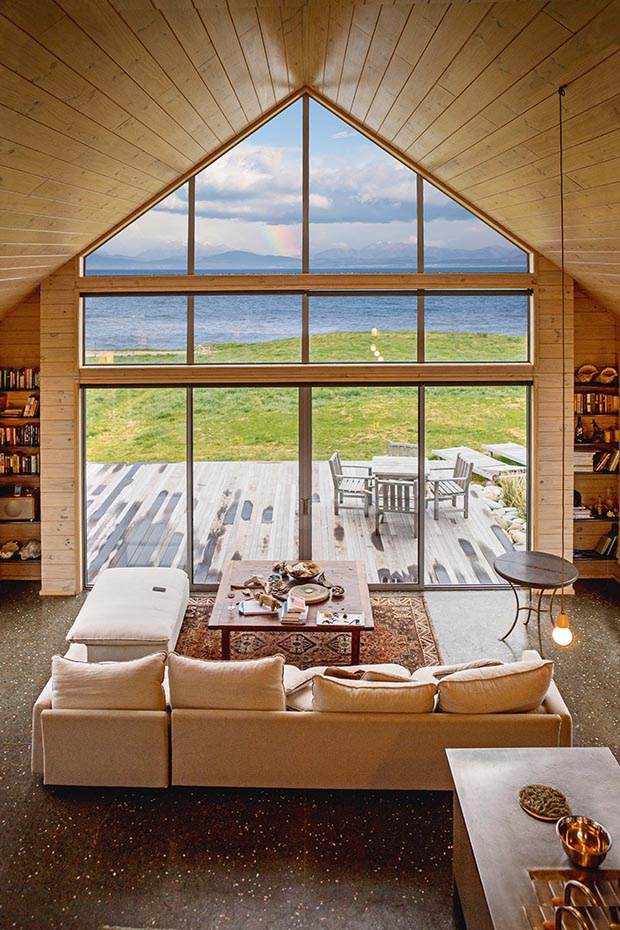 The view from the mezzanine records the current state of waves and weather. The rope that lashes the outdoor furniture to the deck has weathered to the same silvery grey as the wood

The stretch of coast from the Catlins to the start of the Hump Ridge Track is easily accessible but tourists from other countries know and enjoy it much better than most New Zealanders. The beaches are wild and deserted and dream destinations for beachcombers who hunt for ambergris and gold and all sorts of treasures from the sea.

The Hills are part of a small but smart group who find this part of New Zealand thrilling. The functional barn they have built here works ideally as a beach house. It’s easy to look after and even easier to look out of – straight out over the sea where the weather provides endless entertainment. 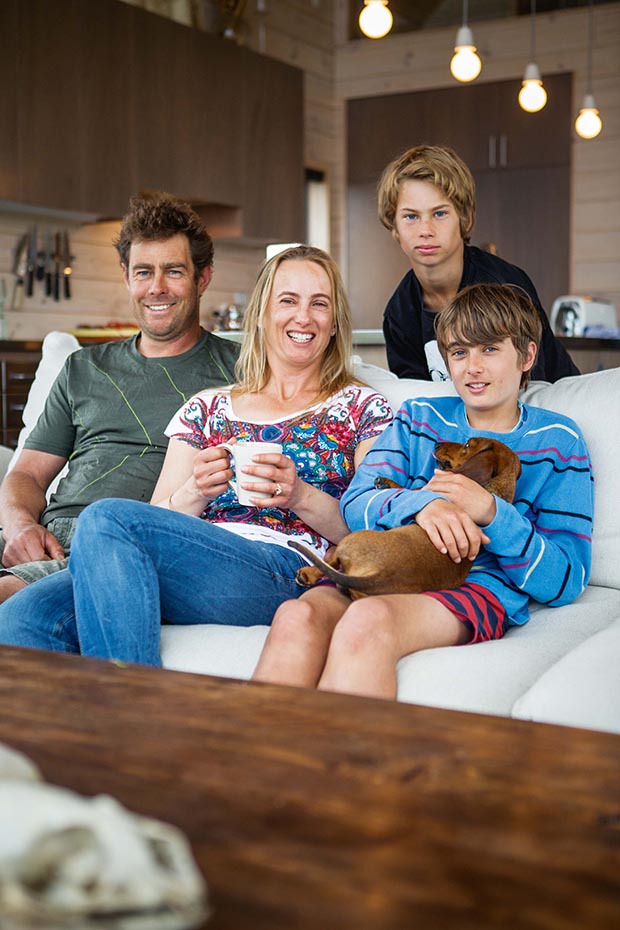 Mark, Monika, Nathan and Oliver are not very good at just relaxing. Even dog Charlie has to be tightly held to keep him still.

The wind has them all in its thrall. The boys love sand karting and flying kites. It sounds safe enough but watching a kite hauling a child high off the ground or a sand kart hurtling along the beach at 80kph would make most parents’ blood run cold.

Not these parents. There’s no mollycoddling here: “Here’s a box of matches, boys – take these marshmallows and go and light a fire on the beach”. Even as a three year old, Nathan was riding his two-wheeler without trainers up and down banks and the photo board in the kitchen shows the boys leaping and jumping and flipping off and over all sorts of perilously high things. 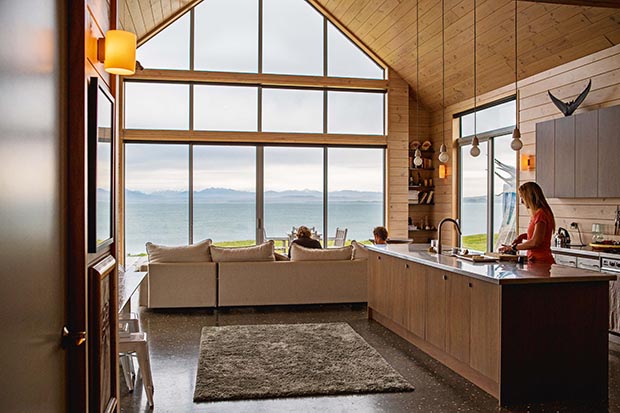 With the constant drama going on outside, it’s hard to leave the vantage point of the big sofa.

They’re all keen on fishing and foraging and Monika always wants to stay in the surf catching whitebait longer than anyone else. “I don’t do food; just juice and cakes,” she says. Mark is the cook in the family, famous for his whitebait and paua fritters. So determined was he to find the perfect paua mincer that he kept buying them on Trade Me. There is a display of the ones that didn’t make the grade displayed on the beams in their Arrowtown home kitchen.

Monika’s claim to culinary fame is her tiramisu where even the bowl it is served in is edible. She’s not as undomesticated as she makes out: she’s a whizz at sewing, even making her own wedding dress. Real life and real work take place at home, just minutes from Arrowtown. Mark is a full-time sculptor, working in an old dairy shed.

He’s been trying to build up a body of work but his pieces are quickly snapped up; he’s responsible for the huge Maori warriors outside Queenstown Airport. His ambition is to gain more global recognition and to have a travelling exhibition one day and one of his metal skiers has already made it to Germany. Monika works full-time as a graphic designer, designing logos and posters for everything from golf tournaments to violin competitions. She also keeps bees and makes honey. Nothing is cosier than to be inside by the fire playing games. Monika made the light herself from driftwood and several goldfish bowls.

The Hills are a very down-to-earth couple. Their vegetable garden is huge and lush and in summer locals stop at their gate to buy their raspberries. Oliver wanted a miniature sausage dog and earned the $900 needed to buy one (that’s not much dog for your money) by picking and selling the raspberries himself. Charlie is now a noisy and much-loved member of the family and, as dachshunds are not known for their water skills, has his own special lifejacket to wear when they’re at the beach.

Monika says she’s no minimalist – “I just love stuff” – but little of it is bought. The house is full of found treasures from their travels, especially from their trips to the beach. Mark has added to the collection of bird skulls and skeletons started by his grandmother and groups of other unlikely objects, such as a huge basket of sculptural-looking carrots destined for Monika’s dangerously powerful juicer, are scattered about. 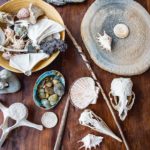 A whale’s intervertebral disc (the big, flat, round thing) that Monika found on the beach joins a collection of marine treasures. 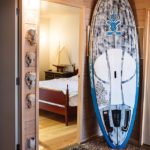 Seal skulls peer from one side of the door while a paddle board slouches against the other. 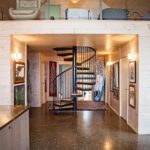 It’s unusual to see the spiral staircase without one or other of the boys whooping down it at speed. 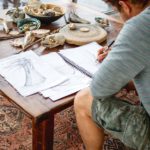 Even when he’s meant to be relaxing, Mark is still thinking and sketching; a study in white horizontal. 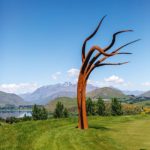 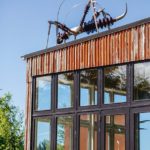 Mark’s weta is perched above the Arrowtown workshop where the windswept lady is being created. 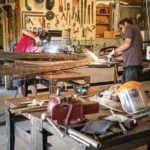 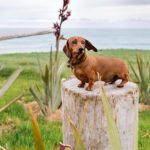 Charlie is top dog in every way. 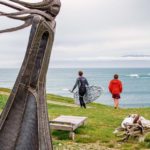 Mark’s windswept lady looks at home but was only visiting for a few days before heading to her new home in Christchurch.

Right now Mark is interested in portraying the wind in his sculptures. A very big lady with wild, windswept hair is coming to life in the workshop.

Monika was hoping this lady would be able to enjoy the wild winds that sweep up from Antarctica on the deck, but she’s already taken. They’ll need to pick up more fish and more treasures from the beach and inspiration for a new sculpture. 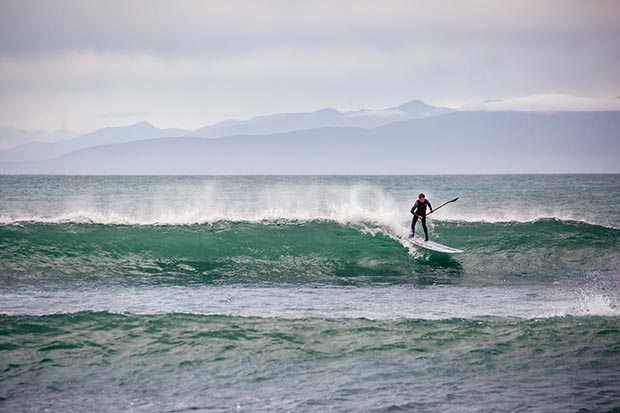 Snow on the Fiordland mountains, clouds and surf.

WHAT THE HILLS WILL BE DOING THIS SUMMER
What are you reading? Monika is currently in love with Scott Fitzgerald who should keep her busy for the next few months.
What are you cooking? Mark is using whitebait a LOT, trying out a soufflé-ish recipe with lots of  egg white.
What are you listening to? Mark plays Sepultura at full blast in his workshop to drown out the sound of builders working and Monika is into classical music. They’re off to see Queens of the Stone Age in March.

What will you be doing over the holidays? Taking the boys down to the beach for a whole lot  of frantic activity. We’re vaguely planning a snowboarding holiday in North America. 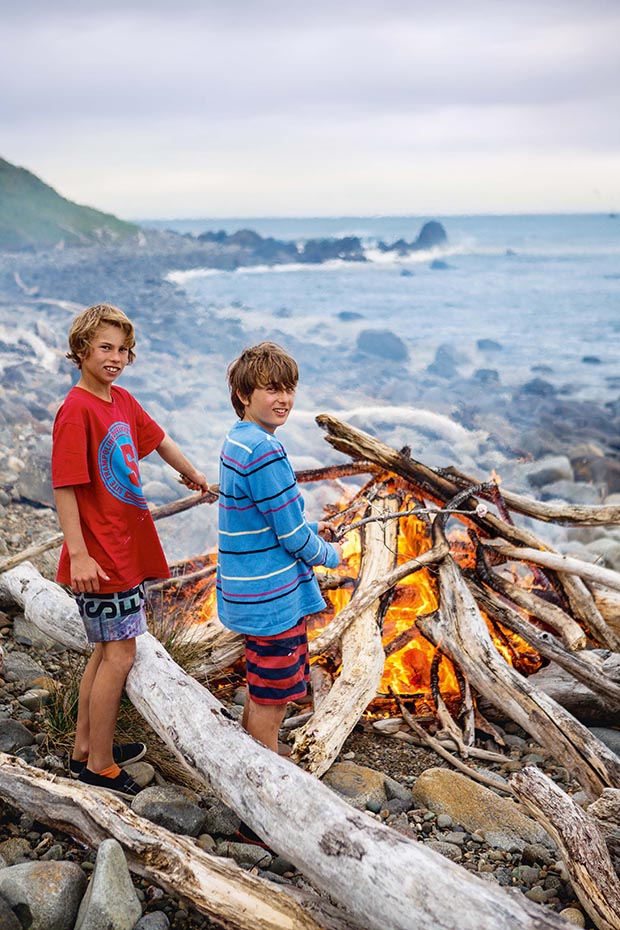 Nathan and Oliver are expert fire builders and even more expert marshmallow toasters.