Behind the scenes at Lothlorien Winery: How this clever Ahuroa family uses their 30-tonne feijoa harvest Love them or loathe them, Lothlorien Winery’s founders believe their beloved feijoas have a budding future as more people grow to love them here and abroad – starting with their sparkling feijoa wines.

Lothlorien Winery’s founders Dale and Eli DeMeulemeester are expecting a surfeit of fruit this season. With the harvest a few weeks away, the plentiful feijoa buds swelling on the branch are a welcome sight after last year’s drought caused distressed trees to drop their fruit early.

The only blessing was the timing. With everyone locked down as the harvest ramped up in March 2020, the lesser yield could be handled by the wider DeMeulemeester clan, locked down together on the family farm-cum-orchard-cum-winery at Ahuroa, 80km north of Auckland.

“We had plenty of grandchildren out here with nothing to do, so we got them all picking,” says Dale. “We pick the fruit up from the ground, which ensures the feijoas are as ripe as possible. I don’t know what we would have done without all those grandkids here!” 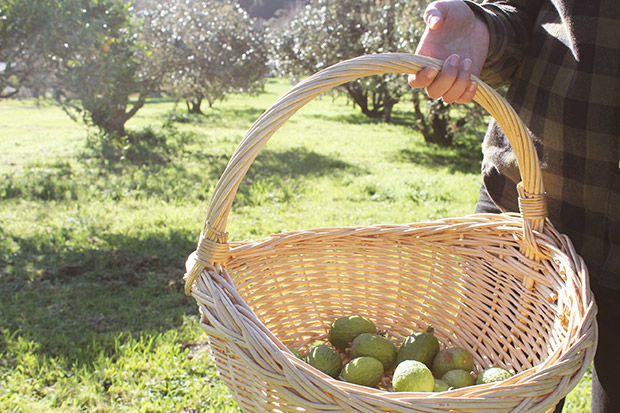 This year’s harvest is Dale’s 45th, having planted his feijoa trees – along with many other fruit trees – on what was a small dairy farm 50 years ago, and renamed the farm “Lothlorien” (yes, Dale is a Tolkien fan). Since then, the 41-hectare property has been transformed into a biodiverse orchard that produces feijoas and grapefruit commercially, and – soon – nuts, including slow-to-produce pecans, which Dale planted 38 years ago

He still keeps a cow or two, hand-milking each morning to supply anyone on the farm who needs milk. Four of his five children, and their families, live on the farm and most are involved in Lothlorien’s business in some way. 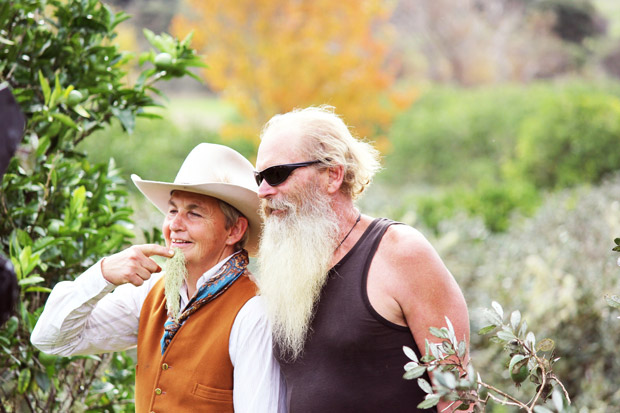 Each year – so long as the weather plays ball, raining nicely in February and March, just when the feijoas need it – Lothlorien produces up to 30 tonnes of feijoas. Finding a viable eating market for that bounty is tricky “as everyone who cares about feijoas already has a tree or knows someone who does”, says Dale.

Exporting whole feijoas is also low return as the fruit must be picked before it’s properly ripe in order to reach consumers without spoiling – in the process spoiling the taste. 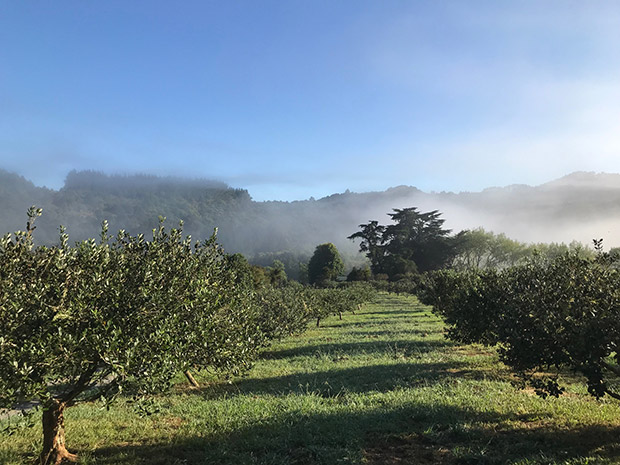 Thus, turning the crop into wine is the best way to make a return. Since 1993, Dale and his son Eli have been producing feijoa wines, first with the help of winemaker Logan Petley (who remains a business partner), and now Justin Oliver. They offer a medium and dry sparkling wine, a Reserve sparkling wine, and a dry feijoa still wine. The wines are a blend of feijoa and apple, with the apple rounding out the flavour, adding body and lowering the acidity. There’s also a Feijoa and Mānuka Honey Liqueur for something different.

All are organic, and all – aside from the liqueur – are vegan, as the wines are fined with a pea protein. That’s important to Dale and Eli – being vegan, because customers kept asking, and being organic, because Dale’s seen what agricultural sprays can do. “When I first came to New Zealand in 1971, I worked in various orchards and I saw the owners and other workers poison themselves with sprays – sometimes mildly, sometimes severely. It seems to me there’s a much better way to produce food than cover it in poison.”

To control for pests, Dale’s feijoas are planted further apart than usual, and planting a variety of other trees in and around the feijoas. He’s favoured trees that, like feijoa, “lend themselves to organic growing”, although the guava moth (feijoa are a type of guava) is an ever-present threat. Through good luck and good management, Lothlorien has avoided the moths’ attention so far and continues to grow feijoa and produce wines, which are held in tanks and bottled two months ahead of projected sales.

Each year Lothlorien Winery produces around 50,000 bottles of wine, with nearly all swallowed by the domestic market. Eli says they have sent some to China and have undertaken market explorations primarily in the Asia-Pacific region.

“It’s an aspect of our business we are currently developing, but the challenges are our size and scale. We can scale up but because we have a biological product, you can’t just turn on a tap and bottle more feijoa wine. Some of the export markets want amounts that just make us laugh, so it’s about finding the right partners who understand our size and scalability.” Lothlorien Wines are widely available across New Zealand in as many as 350 supermarkets, liquor and specialty stores, bars and restaurants, as well as online. Both Eli and Dale admit fruit wine is a tough market, as wine lovers generally think of wines as being from grapes.

Then there’s feijoa’s love it/loath it factor. However, sipping a chilled Lothlorien wine, with its delicate feijoa flavours, is highly recommended for those a little leery of the perfumed, slightly grainy flesh to start developing a taste.

Dale’s been a devotee of the brown-stippled, green-skinned fruit from his first taste. Having traveled around the world from Detroit to New Zealand, he was immediately seduced.

“Oh, I loved it,” he says, reliving the experience. “I couldn’t believe it because most of the fruits in the world are well known. There aren’t many surprises. I think feijoa is the most outstanding and enjoyable fruit that everyone doesn’t know about – but I think they will become more popular around the world.

As to why the Brazilian fruit is so unfamiliar outside of New Zealand, Dale and Eli have some ideas. “I think it might also be a timeline thing,” says Eli. “Over time, people in New Zealand have done work to develop larger size fruits with good flavour, but it’s only been maybe in the last 40 years. Whereas, if you look at fruit like apple, grapes, pears, they’ve been developed as an eating fruit over a much longer timeframe.” 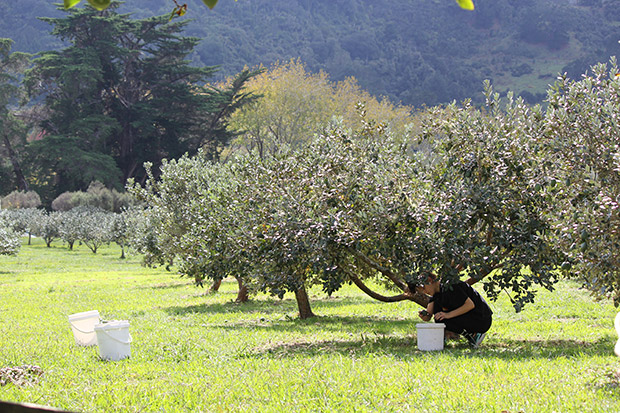 Lothlorien produces up to 30 tonnes of feijoas on its family farm-cum-orchard-cum-winery. Photo: Kim Demeulemeester

“I know people are looking for new fruits, and that’s how kiwifruit took off as being something different,” says Dale. “I don’t think there’s anything quite as exciting as the feijoa, and I know if we capture that flavour, whether bottled, dried, juiced or fermented into wine, people looking for something new will try it and love it.

More stories you might like:
On a roll in Wairarapa: PaperHands owners Ben and Helen Masters revive classic 1960s New Zealand wallpaper designs by Mason Handprints

“If I live long enough, I’m sure I’ll see feijoa spread around the world.” 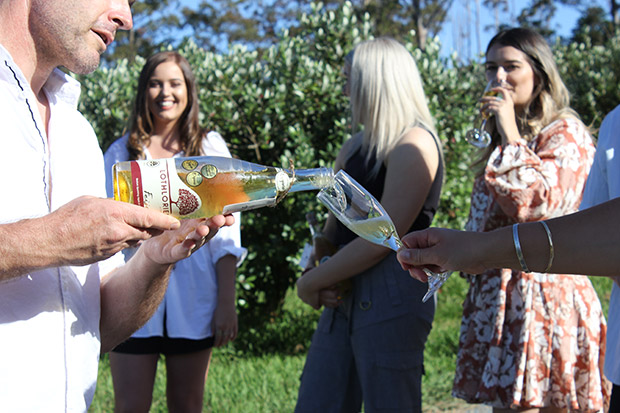 Sparking: Of course, drink it as it comes from the bottle, but it’s also great in cocktails in place of prosecco, or drop a few frozen blueberries or boysenberries into the glass to keep it cool and add another fruity flavour.

The process is very similar to winemaking, says Eli DeMeulemeester, with the added challenge that feijoas don’t give up their juice as easily as grapes. “Feijoas seem juicy to eat, but their cell membranes are robust. We first pulp the fruit and use natural enzyme to extract the juice from the cells.

“Then we use a ‘rack and cloth press’ to squeeze the juice from about 20kg of pulp at a time, trapping the skins and pulp in the cloth. That pulp then goes on the orchard.” “The grandkids help with that,” says Dale. “I drive along on the quadbike, and they shovel it off the trailer.”

The extracted juice then clarifies overnight, before yeast is added and fermentation takes place. “It’s then left to settle and develop for about six months or so, before we fine it with pea protein, filter and bottle it,” says Eli. “The flavour actually disappears during the first couple of months, but it gradually comes back. Our wines have a fresh fruit flavour, so they’re best drunk in the first one to two years.”