How to make apple cider vinegar from apple peel 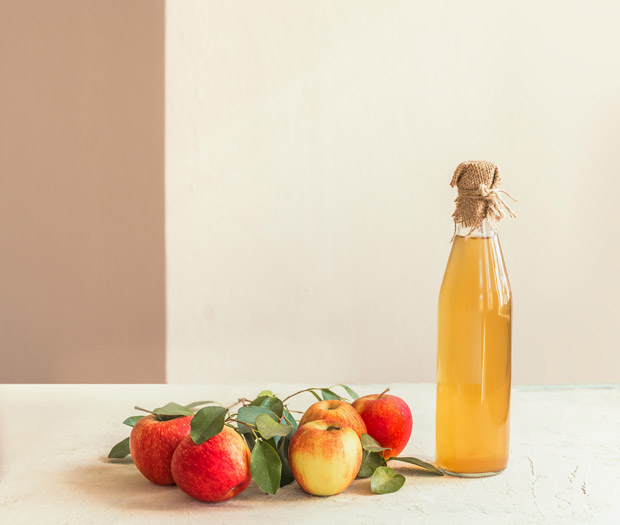 There’s no need for any part of an apple to go to waste.

Some years ago I had an idea to write a cookbook for kids that included recipes for the food mentioned in classic children’s stories. I had read Brian Jacques’ books to our son Theo and we puzzled over the meals and dishes prepared by the little woodland creatures, like meadow-cream, shrimp and hot-root soup, and deeper-n-ever turnip and tater pie.

Imagine our joy when we discovered that (a) Brian Jacques had published a cookbook so children could try making recipes that mimicked those in his stories, and (b) that he actually wrote with so much attention to food because in the books he read as a youth there was often no mention of when, what or where people were eating!

One day Eating By The Book will be completed but in the meantime I have discovered that someone else has already thought about it in regards to the Little House On The Prairie series by Laura Ingalls Wilder. A friend who has an amazing school room for her 10 home-schooled children let me borrow her copy of Little House Cookbook: Frontier Foods from Laura Ingalls Wilder’s Classic Stories by Barbara M. Walker (Harper Trophy, 1979), and in it I came across a recipe that has given me a great deal of satisfaction.

I use a lot of cider vinegar and I always wondered if I would ever get around to making it myself. It fitted perfectly with my habit of preserving apples every year, when I have huge piles of cores and skin left over. About the same time as I was reading the Little House book, the husband of the friend who lent it to me gave us a box of apples and let us borrow his apple corer and peeler to process them. Of all the gadgets available on the market, this one has to be my favourite.

Apple sauce is a staple part of my diet. Yes, I know eating them fresh is best but apple sauce is like a blankey or a favourite toy for me. I grew up eating apple sauce for breakfast, in crumble for dessert, and when I was sick. It is my comfort food and I have never grown tired of eating or making it.

Now that I have what I call my Granny Peeler, I can dehydrate and bottle with ease, and use the heap of leftover scraps to make apple cider vinegar. One of the things I learnt when reading Barbara Walker’s book was that a cruet (a small glass bottle) containing home-made vinegar was a fixture on settler’s tables.

The women of the households back then would use gleanings from preserving and drying apples to make their cider vinegar, often in a barrel that had been emptied of molasses. They wouldn’t clean the barrel out completely so the sweetener and airborne yeasts feeding on the molasses would already be present. They would save the ‘mothers’ from their previous batches of vinegar to kickstart it and two months later, another batch would be ready.

I’ve made my own vinegar now for about four years and so far I haven’t had a batch go off. While I do stress cleanliness, I am also aware that making cider vinegar is a natural process of encouraging wild bacteria to do a job for you and for this to happen there needs to be a bit of the unknown involved. I believe this happens when the cores and skins are lying about on the bench waiting for me to get the gear ready. Also, the apple skin will be a carrier of bacteria. Don’t be too uptight about it, and use organic apples if you can.

1. Sterilise your glass jar or bucket (mine is pictured at right) with boiling water before you start, to minimise the risk of ending up with unhelpful bacteria taking over your brew and turning it into a manky-smelling cesspool.

2. I originally used a large wide mouth jar but it wasn’t big enough so I switched to a 10-litre plastic water jug (previously used only for water) and this works just as well.

3. This recipe is for 2-3 litres of vinegar but I make loads of apple sauce in one sitting so that I have enough cast-offs to make between 6-9 litres of cider vinegar (2-3 times this recipe).

How to make apple cider vinegar

You’re going to need a ‘mother’ for this. A ‘mother’ is the slimy brown stuff that forms at the top or bottom of a cider vinegar bottle, or it can also take the form of a ‘mushroom’ floating on the surface. This is the good bacteria that causes fermentation.

When making apple cider in this way you will begin to notice that different sweeteners, vinegar ‘mothers’ and apple varieties give you different flavours. 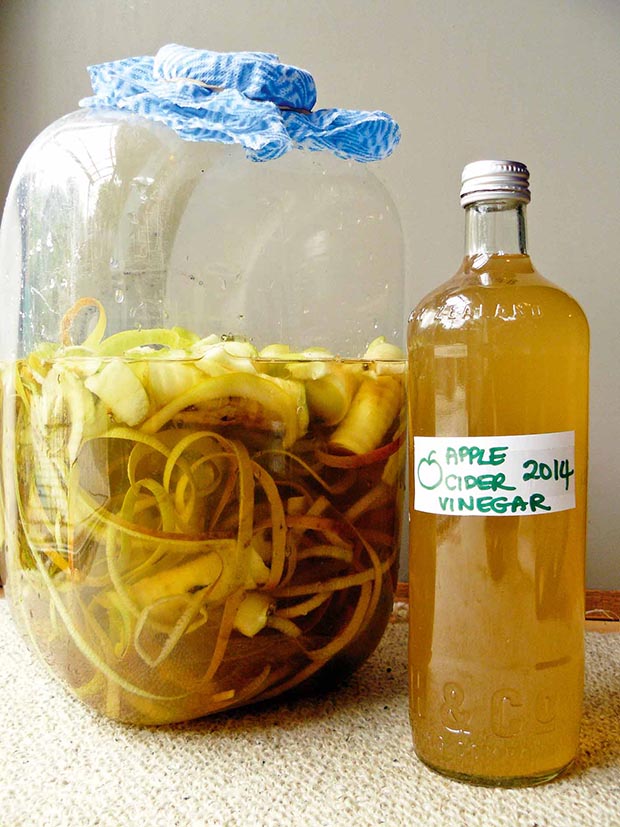 Place the cores and peels into a wide mouth container that has been sterilised like a big glass jar or small plastic bucket. Pour in the boiled, cooled water until it is covering the apple material, plus a bit. Stir in the sweetener (dissolved in a cup of boiling water) and the cider vinegar with its ‘mother’.

Secure a clean cloth over the container with string or a rubber band. Leave it in a dark place close at hand so you can keep an eye on it. It should start bubbling after 7-10 days but if none occurs, you may have to add half a teaspoon of bread-making yeast to help it along.

If white mould forms on the surface within the first month, you can do one of two things: if it bothers you, you can skim it off gently without disturbing the contents OR you can leave it alone. After 4-6 weeks the bubbling should have stopped and souring will begin. After 8 weeks, taste the vinegar (for acidity) and smell it. Hopefully it tastes and smells like vinegar!

Strain all the cores and peels through two layers of cheesecloth or a coffee filter and pour your vinegar in sterilised bottles, ready for use. Dilute with water if it’s too strong.

At some point in time another ‘mother’ may form just below the surface of your vinegar. Remove it carefully and keep it in a sterilised jar in a bit of vinegar for the next batch.

It’s ok if your vinegar is cloudy – that’s the mother growing.

If a white or grayish scum forms on the surface before the 4-6 weeks is up, skim it off gently without disturbing the contents.

Make sure that no fruit flies or critters get into the fermenting vinegar.