Mexican style down Northcote way: Meet the surf and tequila-loving couple behind Made in Mexico When the kids were growing up, family foosball competitions were regular events. Now, Briar and Tony have to battle it out between themselves at the table, which is at one end of their living room. The sliding barn door that separates the bedroom zone was made by Tony and a friend and is finished in woven copper strips bought from a spouting tradie.

Spontaneity has taken two long-time surfers on a journey of self-discovery — and landed them a business to boot.

There aren’t many who can boast that a barrel of aged tequila awaits them in a Mexican casa. But Briar and Tony Walsh are regular visitors to the land where New Zealand’s avocado shortage is scoffed at. The Auckland couple has learned, through much delicious trial and tipple, that tequila isn’t just a drink shot down in a teenage daydream.

It’s to be savoured. “You wouldn’t scull a fine wine,” says Briar. “This is fine-sipping tequila, stored in oak barrels in my brother-in-law’s cellar. There’s no lemon or salt involved, and you’ll never get a hangover.” 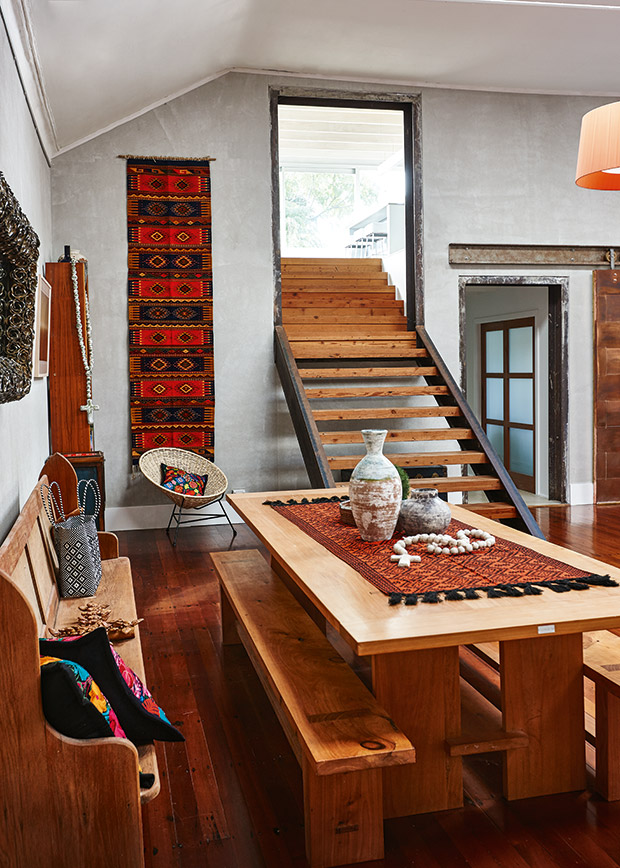 The stairs, which are made of douglas fir, were recycled from an old lean-to that had been added to the building. They now lead to a kitchen and dining area. The shopping bag on the church pew was made by prisoners and is part of the Made in Mexico offering, as are the Acapulco chairs and table runner. The rug displayed on the wall is from Oaxaca.

These México trips, which started back in the 1990s as surfing expeditions, have not only opened Briar’s eyes to the gentrification of this agave-extracted alcohol, but to many other lessons, too.

She has learned that the origin of burritos is hotly debated (Mexican or American?) and that jandals are the best footwear for traipsing along dusty streets looking for artisan-ware. Ziplining across the Copper Canyon is a terrifying tourism experience she’s happy to have endured only once, and long-distance bus travel in México is more luxurious than one might imagine. Briar researches the history and craftsmanship of México before annual buying trips for her Made in Mexico pop-up shops, which she runs with a partner, Monique Geenty. “After years of doing business, I speak acceptable Spanish,” she says.

But, more than anything, she has discovered something far more profound. She has learned the value of trust.

More stories you might like:
A couple's decades-long mission to save New Zealand's heritage seeds and fruit trees at the Koanga Institute

To be fair, Briar has never been one to doubt herself. Her pathway has been one of “dive in and deal with it”. “I’m the type of person to go with instinct,” she says.

When she moved from Rotorua to Auckland as a teenager with her family, her heart was set on becoming a professional dancer. 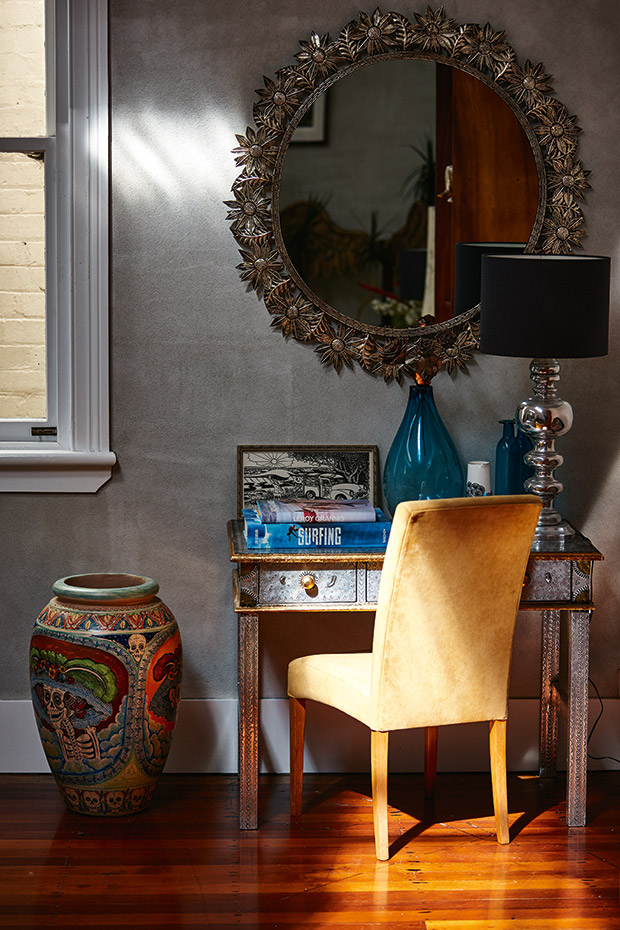 Much of the decoration in Briar and Tony Walsh’s converted saloon is handmade and imported from México, including a table in beaten tin with gold-leaf edging, a tin mirror with hand-cut flowers and a painted urn from Santa Rosa. On the table is a black-and-white drawing of a classic Morris Minor ute with surfboards by Mount Maunganui artist (and international surfer) Daryn McBride.

“My life was dancing. I loved ballet, tap, jazz and ballroom.” She trained hard and ended up working for six years in cabaret at Burgundy’s in Parnell. Her day job was managing a model agency, and this is why she got to deliver such a direct opening line via telephone to her husband-to-be. “I hear you have a really good body,” she said, somewhat flirtatiously.

When Tony, who had been roped in by a friend for a wetsuit parade, pitched up, that was confirmed. They’ve been a couple for 31 years. Part of the attraction is that they are like-minded spirits: adventurous in outlook, bold in business. Mexicans like to regularly acknowledge their dead and crafted skulls are often given as offerings.

“We’re both prepared to give opportunities a go without overanalyzing,” says Tony. Briar progressed to work as a casting director, while Tony – a mechanical engineer – darted off in a different direction when he completed his degree in marketing.

Perhaps it’s their laid-back surfie attitude that makes them prepared to wade into uncharted waters. “In the early 1990s, long before the coffee culture was up and running, we set up a café on Ponsonby Road called Bohemian,” says Briar. A few years later, they sold it to friends. 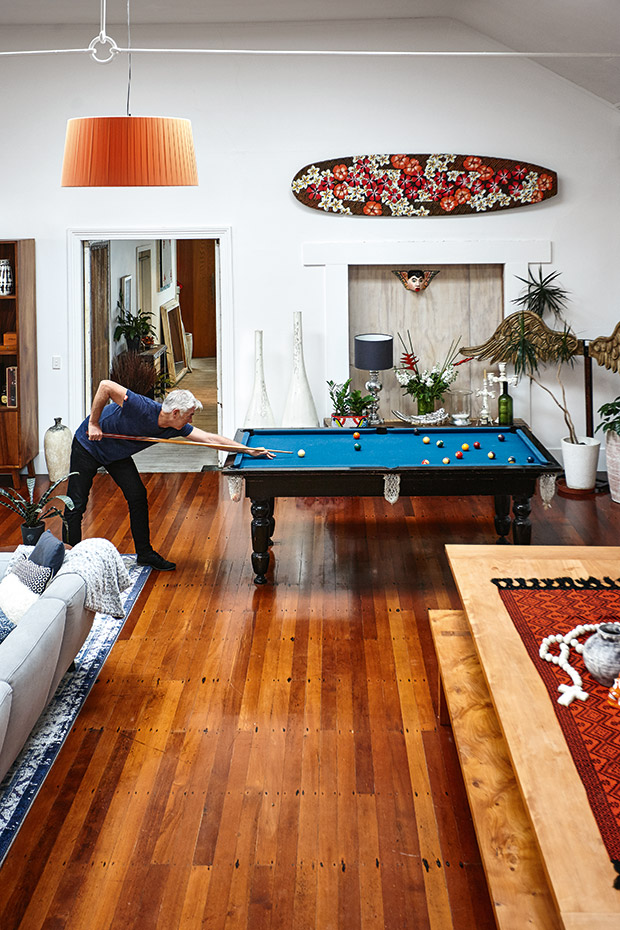 The carved and painted surfboard by Raglan-based Aaron Kereopa overhangs the pool table and is a drawcard for the couple’s teenagers and their friends. The pair of wings (right) was hand-carved to order in México. “It was crafted for us by an artisan called Luis who has no birth certificate so doesn’t know his age. His work is beautiful,” says Briar.

Their relaxed worldview is also evident on the home front. Even though their kids were young at the time – just three, six and eight – Brair and Tony did not hesitate when a converted hall in Northcote Point came on the market.

An old photograph taken of the hall in the 1920s shows workers laying the concrete road in front of a double-storey brick building. The scene is a hive of industry. 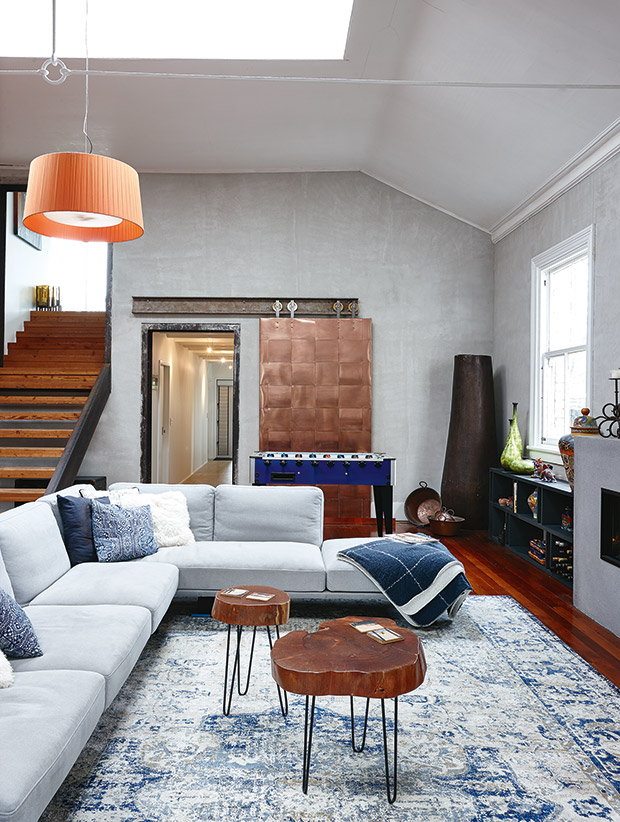 Skylights bring daylight into the heart of the former billiards hall, which has a 5.5-metre stud; the building’s original mataī floors were stripped and polished but not too much: “We didn’t want to remove the character,” says Tony.

When the Walsh family arrived here 14 years ago, the hall required just as much work. “It was built in 1905,” says Briar. “It had been a billiards saloon and, in the 1940s, became the Returned Services Association clubrooms.” The roof leaked like a sieve, the kitchen consisted of a sink and an oven on a tiny bench, and the walls were covered in soot from the un-flued fireplace.

“We bought it without really knowing what to do but thought, ‘let’s give it a go’.” Today, of course, it’s a home with the spatial wow factor, rich with personality. The bones of the hall are unaltered – a gable roof soars above beer-stained floorboards in what has become the living room.

“We didn’t want to ruin it by putting in a mezzanine,” says Briar. Instead, they maintained the original footprint but made a bedroom-and-bathroom zone in a lean-to area at the rear and popped another level upstairs to accommodate a kitchen and viewing deck. The vista across the harbour stretches from Rangitoto to the city. 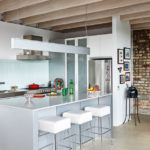 Upstairs in the converted hall is light and white save for the original brick wall on one side of the room. 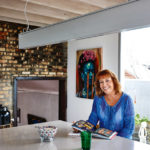 A Frida Kahlo portrait Tears of Colour is symbolic of the suffering the iconic artist went through. “Frida is adored in her home country. In México City, the blue house she lived in has been turned into a museum and is a must-visit,” says Briar. 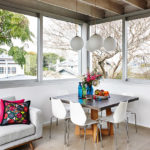 The dining room is like an eyrie with extensive views of the heritage neighbourhood, across to Rangitoto and Auckland city.

The hall has proved an open-hearted place to live. When the kids Ella (now 23), Mia (21) and Logan (17) were young, they’d ride their scooters around the living space.

“The hall is my favourite place. We sometimes forget how lucky we are but our friends are quick to remind us on rugby nights,” says Tony. Another bonus: the loftiness can easily accommodate a film dolly for the shoots that occasionally happen here.

While Briar still runs her own casting business, in the spirit of keeping things interesting she also has a pop-up and online shop of Mexican homewares and art. It was a leap of faith. “The first time I put a shipment together, it was scary,” she says. 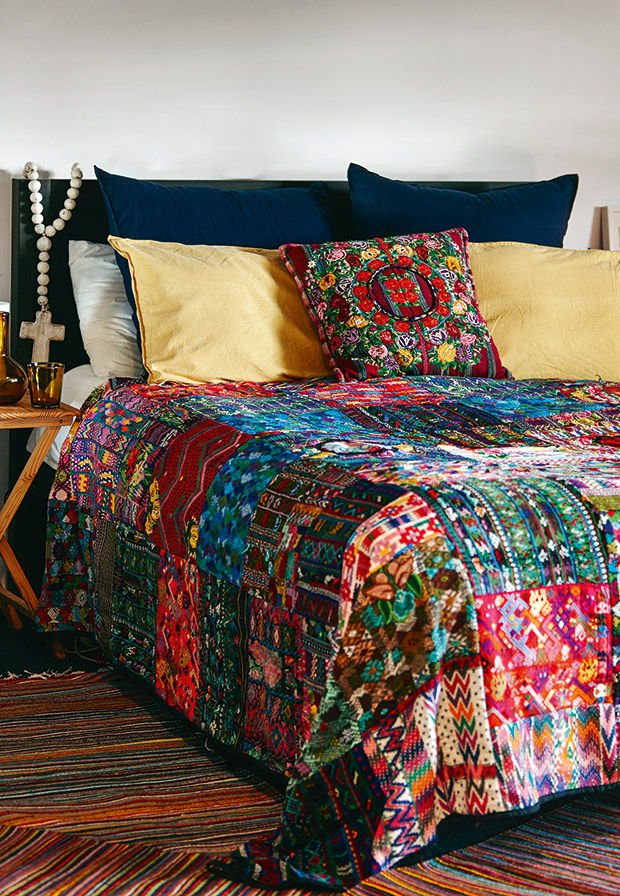 In the guest bedroom, a handmade huipil quilt brings a patchwork of pattern to the space. In México, the quilts are handed down through generations.

“Back then, I had to pay for everything upfront in cash. After I left México, I had a consolidator in Guadalajara who had agreed to get it all into the container for me.” Briar tracked the ship nervously from Northcote. “Once you start, there’s no going back.” Not a single thing went wrong.

That was 2012 and Briar and her Made in Mexico partner, Monique Geenty, now take annual buying trips together, although in 30 degrees Celsius it’s often a hard slog. 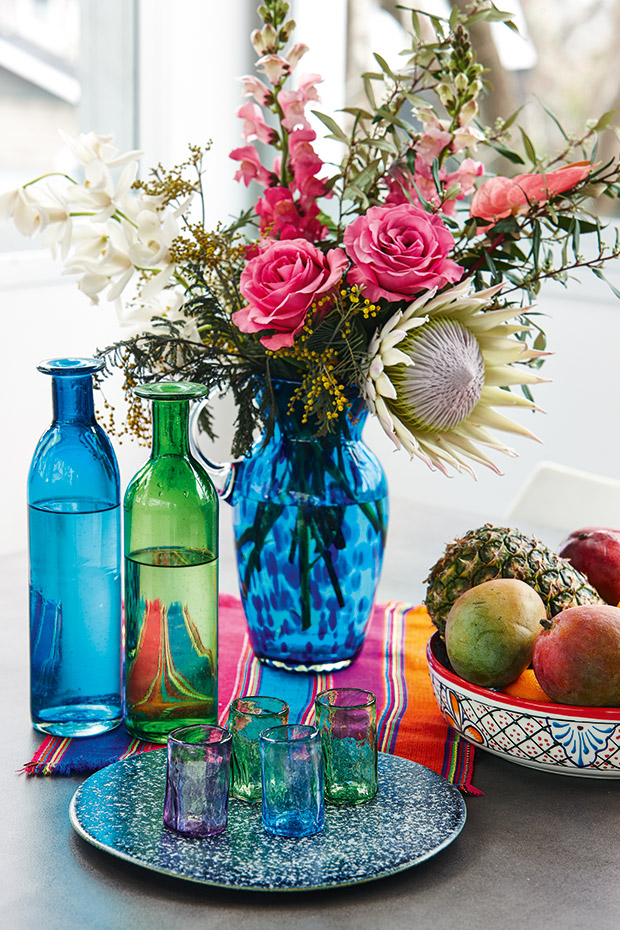 The Walshes have become friends with the Alba family in México who made many of the hand-painted bowls and plates that brighten the couple’s everyday eating.

One bonus of the business is that the hall is filled with handmade ebullience – bright painterly ceramics, textural cushions and tablecloths, art and icons. But the real reward is the people they’ve met and an invigorated belief in the goodness of humanity. This includes Victor at the Red Tree House in México City, who organizes fish tacos, fried cactus and a glass of wine no matter their hour of arrival; the Alba family in the small town of Guanajuato whose faces light up with genuine welcome; and the myriad skilled artisans who share their crafts and their stories. Tony and Briar on the balcony where, in summer, the surrounding greenery makes them feel like they are living in a treehouse.

“The artisans are so inspiring it blows your mind. Many may not be able to read or write, but they have a great love of family and seem genuinely happy.”

Briar is pleased it isn’t in her’s or Tony’s nature to overthink things, or they may never have traveled along this avenue. México now feels like a second home. And that’s something they are only too thrilled to toast with a glass of tequila. Cedar cladding now disguises the entrance to the 1905 saloon in Northcote Point where folk came to play billiards and enjoy a glass or two. Briar and Tony replaced the glass front doors with wooden ones and plan to install bi-fold windows upstairs.

GUIDE TO THE BAJA

Baja California is a peninsula in Northern México, a surfing mecca where Briar and Tony often holiday. They recommend:

* Todos Santos, a coastal town that has “pueblo mágico” status, which means it is deemed “magical” and has government protection. It’s known for its impressive colonial architecture, handicrafts and galleries.

* The Green Room, a restaurant on the beach at La Pastora. “The tostadas with fresh tuna, octopus, prawns and mahimahi are delicious.” La Pastora breaks 300 metres from where the couple stay. “It can be a great right-hand point in the winter (November to March), with fun waves year-round.”

* “Cerritos, 15 minutes south of Todos Santos, is a fabulous swimming beach that has good consistent surf all year (right-handers in winter),” says Briar. “It’s sheltered from the north winds, which means it’s a favourite afternoon spot. Check out the Barracuda bar for tacos and margaritas.”

* Oaxaca, where Mézcal hails from, is best for textiles and rugs. “It’s famous for chocolate and mole sauce, grasshoppers (eaten like popcorn) and Oaxacan black
clay pottery.”

* Guanajuato is known for its silver-mining history and colonial architecture, and a street called Alley of the Kiss, named because the balconies are close enough to reach across and smooch.

* Puebla, southeast of México City, has an outstanding culinary history (try the creamy Chiles en Nogada). It’s also the home of Talavera pottery, introduced by the Spaniards in the 16th century.

* México City must-sees include the museum home of Frida Kahlo, the historic murals of Diego Rivera, Chapultepec Park, and the UNESCO world heritage site, Teotihuacán, with its Pyramids of the Sun and Moon.