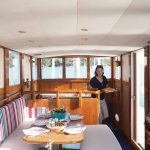 The Sinclair-Rycrofts will be hoping for some long, hot days this summer. “We are planning a week on the Moerangi in January on the Northland Coast, based around Tutakaka,” says Mick. 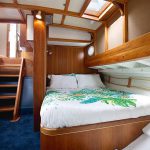 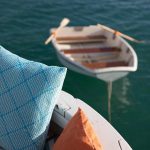 He’s also had a number of “hints” from clients and mates that work should end early on Fridays when the fishing’s good. 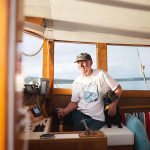 “When we got the boat,” says Alice, “most of the structural re-build had been done- but the interior looked tired, so we put in new helm and wall panels, carpet and upholstery, 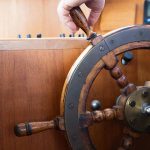 Next we plan to re-instate the single berth giving us more room for Edward’s friends. Some of the lighting and wiring also needs updating- boats are always a work in progress.” 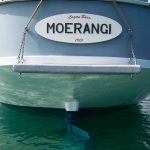 Still shipshape and seaworthy, but the Moerangi has had more birthdays than the Sinclair-Rycrofts combined. 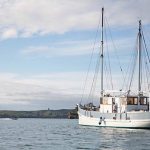 “The Moerangi is very much a communal boat,” says Alice. “We love going out with family and friends for pleasure cruises and fishing trips.” 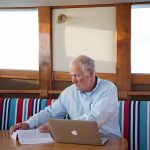 Mick’s clients love the location of his very “creative” meeting room but big boats- particularly ferries- coming in and out of the harbour can occasionally make things a bit wobbly underfoot, a situation that has earned entertainment lawyer Mick a new nickname: The Rock and Roll Lawyer.

She may be berthed close to the super yachts of the world’s well heeled at Auckland’s Silo Marina but the Moerangi is no flash-n-crass gin palace.

Should you ever have reason to meet media lawyer Mick Sinclair in his waterfront office be sure to leave the heels at home. Chambray blue skies might suggest a pretty pair of sandals but vertiginous footwear isn’t right here. Mick’s meeting place, perhaps not out of character for someone who makes a living in the creative industries, is a boat. But not any old boat. She may be berthed close to the super yachts of the world’s well heeled at Auckland’s Silo Marina but the Moerangi is no flash-n-crass gin palace. 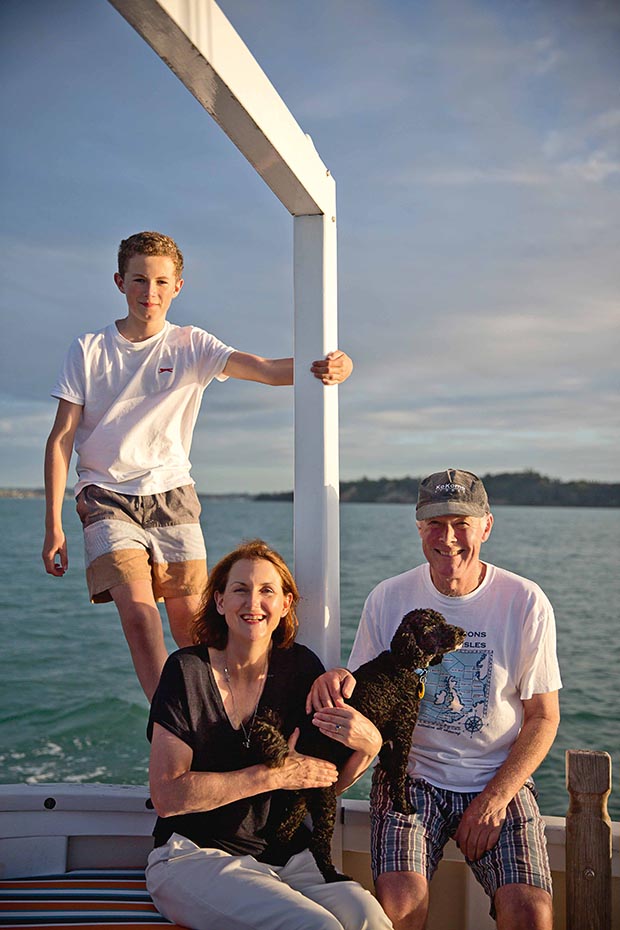 She has been and will remain – at least for the foreseeable future – a working boat: first a fishing craft, then a ferry, now a family boat/lawyer’s meeting-room-with-a-difference. Built by the Logan Brothers and launched in 1901, the Moerangi is New Zealand boating pedigree from bow to stern. Mick has had his eye on her lovely lines for years. But like many relationships based on distance, it took a nudge to finally commit. It came in the form of a matchmaker called Brett.

“A friend saw her for sale, knew that I wanted her and went up to Whangarei to take a look. When I asked him how it went he said, ‘I’ve bought it.’ What he really meant was that he had secured it for me, subject to finance.” Next we plan to re-instate the single berth giving us more room for Edward’s friends. Some of the lighting and wiring also needs updating- boats are always a work in progress.”

This is a story of summers past and about summers to come. It’s a tale of mateship and family legacies. Of water babies and sailboat deliveries. Of a bloke, his boy and a boat. It is a snapshot of New Zealand boating history, of growing up in the City of Sails. Boats are in the Sinclair blood. “Mum and Dad were both into yachts and powerboats – boating has always been in our family,” says Mick.

“As a family we made full use of New Zealand’s amazing waters – fishing and water-skiing on Lake Taupo, sailboat delivery trips up to the Northland coast, group family sailing trips in the Bay of Islands and yacht racing on the Gulf.” 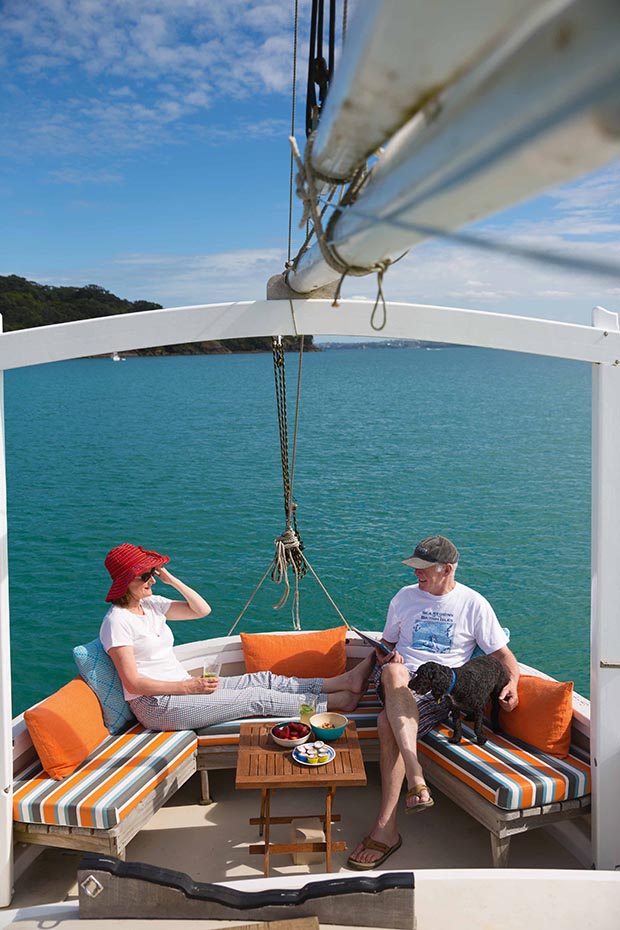 Mick and Alice met at a party

Mick and his three sisters grew up on north shore Auckland and holidayed on the water. Some of the friends he made at intermediate school have sailed the seas – and life – with him ever since. In the mid-1980s he was working in the UK, crewing for others, on boats from quarter-tonners through to 70-footers. “A Kiwi on the water in Europe is a bit like an albatross – good luck. Once they have your number, you are always in demand,” he says. Back home, he has spent decades racing, crewing and generally being a boatie. Despite needing a gentle nudge, buying the Moerangi felt like the right thing to do.

“One of the reasons was to give my son Edward and his mates the same opportunity of getting out onto the Gulf that my dad gave me,” he says. For his part, Edward (13) was rapt. “The first time we went out on a family trip we ran into a pod of dolphins by Bean Rocks. I thought Tui, our dog, was going to jump in she was so excited,” he says. Mick’s wife, Alice, however, took just a little more convincing.

“I think it was a bit of a shock when she first saw it. It was much bigger than she had expected. It took her a while to get used to the idea of it.” She also got a push of sorts of her own.

“Edward and I sat in the car one day and came up with a plan as to how we could get her on board. We figured it was a traditional boat that needed a traditional revamp and since Alice was training to be an interior designer at the time so we suggested she make it over.”

It was a plan that worked. But then Alice Rycroft has equally as much style and credibility as the boat she was coaxed to revamp. She was fashion editor of Fashion Quarterly magazine in the late 1990s, a time when style magazines – much rather than blogs or celebrities – dictated fashion trends. If Alice picked grey and pink as the colours of the season, you could pretty much bet that’s what every woman would be wearing. Years later, and with the title of fashion editor and columnist for The Herald’s Canvas also under her belt, she has now retrained as an interior designer. At 55 feet and weighing in at 24 tonnes, the Moerangi now has someone suitably qualified to shape her trim and tidy lines. 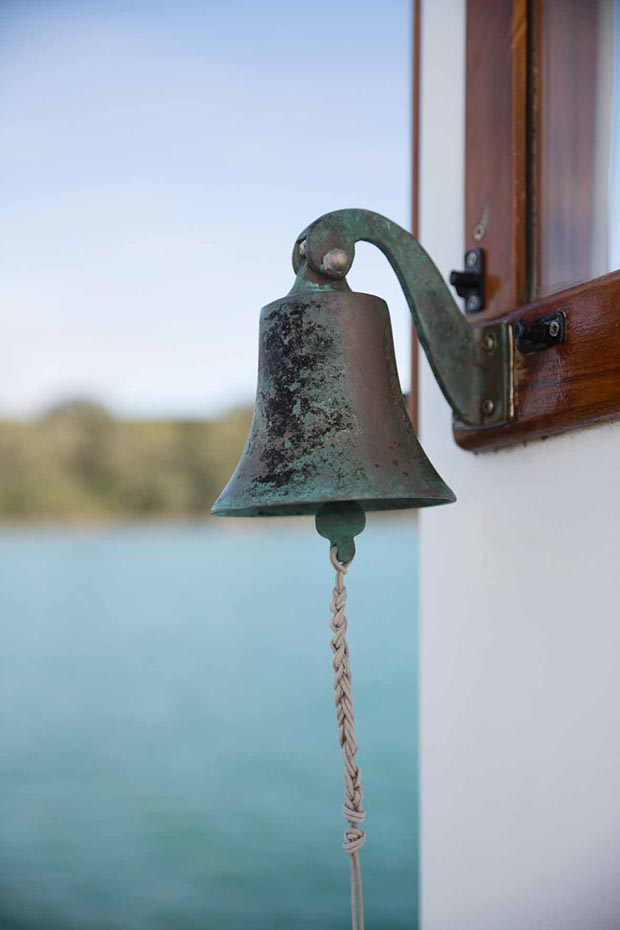 Although it was launched with a schooner rig, the Moerangi also boasted one of the first oil engines in New Zealand. Initially owned by Archibald Weir Junior, she started out towing the fishing fleet in and out of Moeraki but as more fishing vessels added engines she ended up a ferry with the Peninsula Ferry Co in Otago Harbour. Dunedin’s Broad Bay has a street named after her. In the early 1920s she was converted back to a fishing boat, spending her time first at Port Chambers and then from Lyttelton to Akaroa. There, she was the fastest trawler in the fleet, clocked twice at 11 knots. But then things get a bit murky. Records for the Moerangi seem to stop between the late 1920s and the early 1980s. It’s Mick’s mission to track what happened to her. 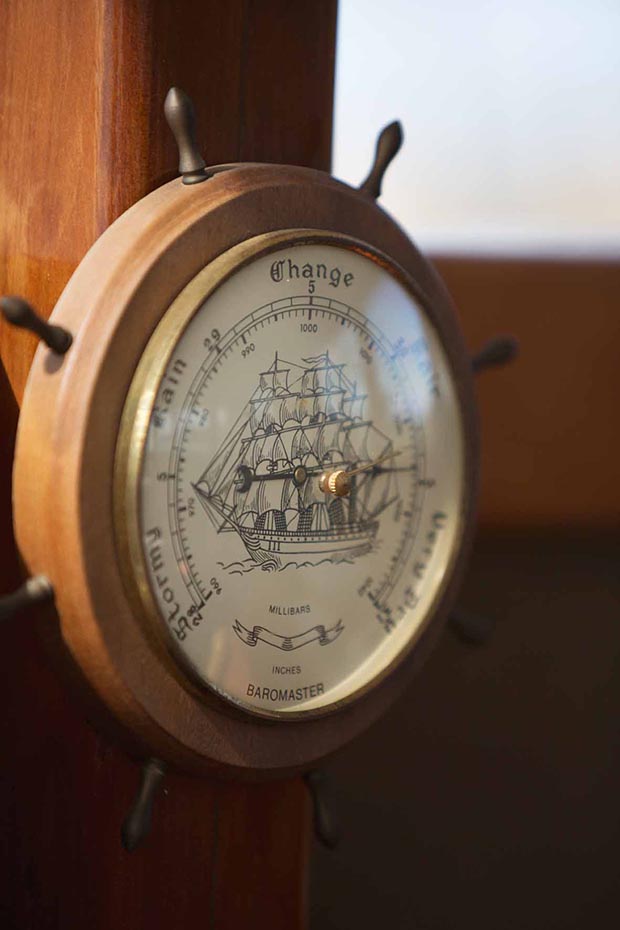 “There is a big gap of unknown years as a fishing vessel. I guess she could have sat neglected for years.”

Now berthed at Auckland’s Heritage Landing, alongside some of the country’s finest classic yachts, she was extensively restored in 1983 and fitted with a Gardner diesel engine. Owners since have re-decked her, given her new cabin tops and redesigned her pilothouse. In her present incarnation, she has travelled around most of the North Island and ended up based on the Great Barrier Island, before Mick and Brett brought her down the coast.

“I don’t really see us as her owner,” says Mick. “Really, all we are is her custodians – she could be around for another 100 years.” 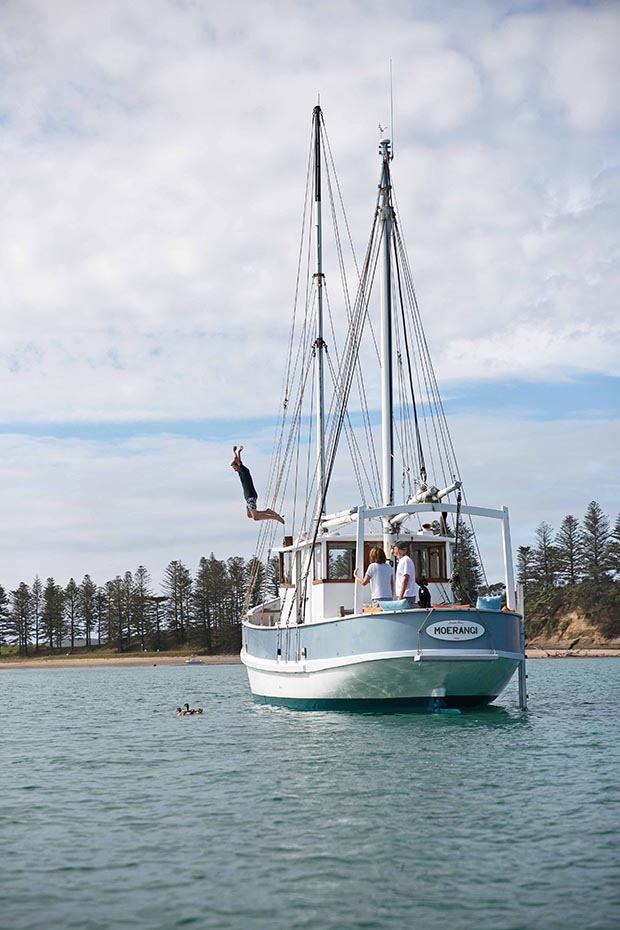 Archibald Logan was born in Renfrewshire, Scotland, but it was in New Zealand that he was to make his name. Arriving with his family as a child in 1874, he went to school in Devonport and then, along with four of his five brothers, started to work in his father’s boat-building business. In 1890 Arch and his brother, Robert, set up R & A Logan on the city side of the Waitemata Harbour, and was later joined by a third sibling, John. Under the name Logan Bros, the trio went on to become very successful as the designers and builders of working and pleasure boats, many of them – like the Moerangi – considered classics. Logan Bros boats were exported to Australia, South Africa and throughout the Pacific region and, although the Logan Bros’ Auckland yard only lasted until 1910, it was by far the most significant boat-building business of its time. “Royalty on the waterfront,” says Mick. 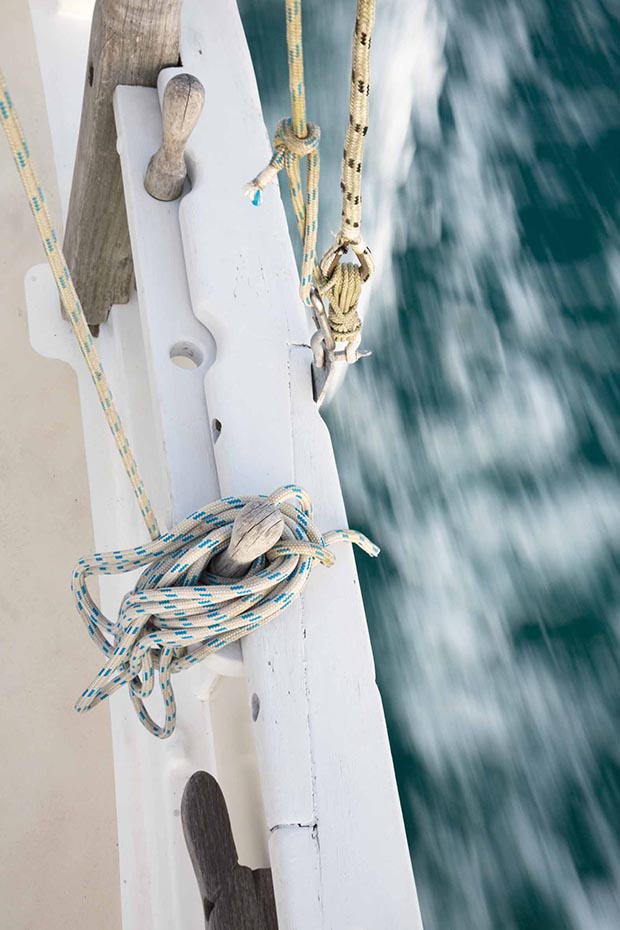 The Moerangi is moored at Auckland’s Heritage Landing, co-managed by Waterfront Auckland and the Classic Yacht Association. Boats berthed there represent some of the country’s finest classic yachts and wooden boats. If you are a boating fan, it is a must-visit – a chance to get up close with New Zealand’s maritime history. “Auckland is the City of Sails after all,” says Mick. “This is part of our heritage.”