A former theatre nurse has turned her Raglan property into an almost self-sufficient “wild garden” and is now raising a gluten-free bread business that looks and tastes as good as the real stuff.

Eight years ago, Lucy Donaldson planted some spinach and a few herbs on the Raglan property she shares with her family. Today the land is flush with fruit trees, vegetables, herbs and other edible plants.

When the former theatre nurse settled onto the 1.5-hectare property with her husband Elliot, aside from some scrappy grass fronting the house, gorse, ginger, blackberry and other noxious weeds dominated the native bush-encircled land. The couple got busy clearing and, when their first child Aria (6) was born, Lucy began gardening in earnest. “I became conscious of feeding my daughter spray-free food and, as I wanted to stay at home with my baby, it was much cheaper to grow my own organic food. Gardening was also good for my mental health as, because we live too far from parks, getting out into the garden made me feel like we’d done something outside during the day,” says Lucy, who documents her gardening under the Instagram moniker @gardentalesnz.

Lucy started with two small garden beds who Elliot, a builder, had erected, but her aspirations – and her garden – expanded steadily. “Now I’ve probably got 30 different fruit trees, including a macadamia tree. I grow shiitake mushrooms, a whole heap of salad greens and other vegetables, berries and grapes, and lots of root vegetables.” 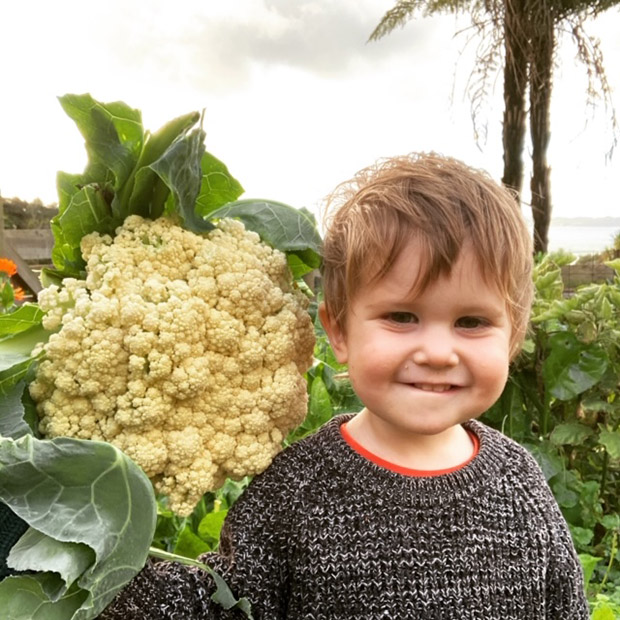 Caio poses with this week’s vegetable for dinner.

The pandemic ticked Lucy’s gardening up a notch, strengthening her resolve for a self-reliant food source. Now she has edible plants, flowers and fruit trees in pretty much every possible space.

That space provides about 90 per cent of the family’s produce requirements in summer – a family that now includes Makai (4) and Caio (2). Just as young Lucy did in her own parents’ garden, the three children garden alongside their mother, helping to plant, weed and harvest. That close involvement has undoubtedly educated and enhanced their taste for vegetables, and Lucy’s delighted the three eat pretty much everything, even when their nibbling is unsanctioned. 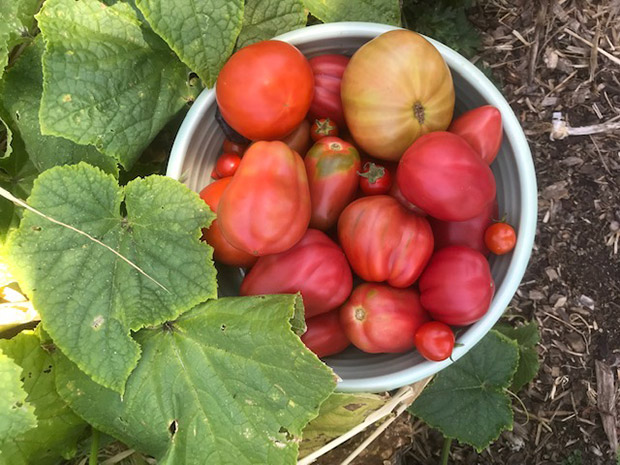 “One time I had a whole heap of big cauliflowers, but each had a little hole in the middle. I wondered what on earth was going on. But then I looked out the window and saw Aria boosting Makai over the garden fence so he could bite the centre out of a cauliflower! They’re always out in the garden eating and tasting as we go. They grow it, so they eat it. Nothing is new to them, so they’re not afraid of anything.”

Lucy plants and weeds by the moon’s phases as much as she can (planting root vegetables just after the full moon, as then the moon’s pull decreases and the sap flows downward aiding root growth), but the garden requires surprisingly little upkeep most of the year. 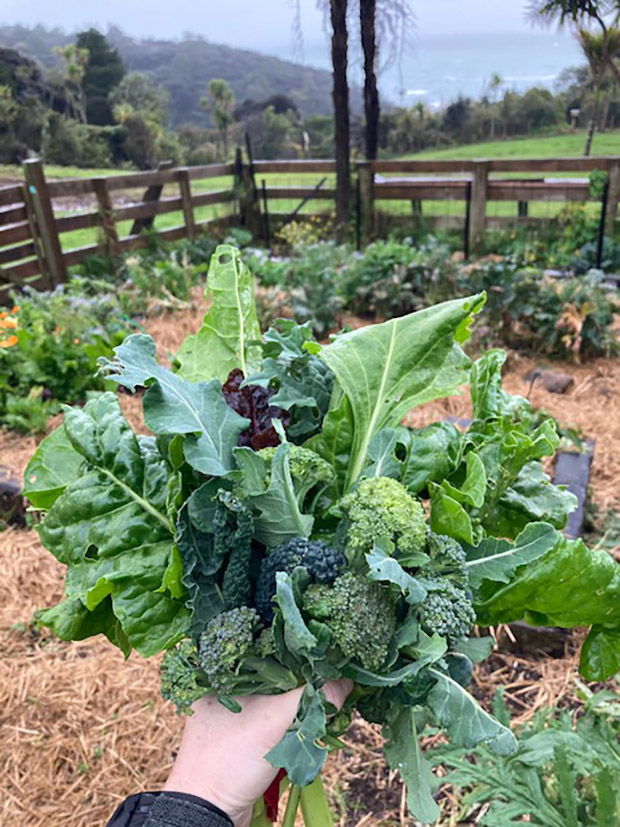 Lucy says mostly she just does “a bit of maintenance” as she gathers produce for dinner, so, aside from careful mulching (see below), the garden “maintains itself to a degree”. It helps, she says, that it isn’t perfectly manicured, that vegetables and edible plants are mixed up with flowers and weeds. And unless those weeds are couch grass, ginger or blackberry, Lucy is generally happy to let them lie – or, if they’re dandelions, she’ll pick them and include the leaves or sunny flowers in a salad.

While the children’s arrival ticked up Lucy’s gardening, it also sparked her to give up gluten – and kickstarted her into a new occupation.

“I had babies that would scream day and night from colic. I wanted to do everything I could before looking at medical treatment. “I started making sourdough bread because gluten is digested during the sourdough fermentation process, so a lot of people with gluten intolerance can tolerate sourdough. But my third child couldn’t even tolerate sourdough, so I went completely gluten and dairy free.”

Horrified at the price, the ingredients and – let’s be honest – the taste of commercially available gluten-free breads, Lucy began experimenting with making her own. “I bought a lot of flour from our organic co-op and made a lot of very expensive and inedible bricks! My husband did question whether it was economical, but I persisted to get it right. I spent hours and hours trying to develop something as close to normal bread as possible. Soon I was making loaves that had far more nutritional value than anything I could find on the shelf.” 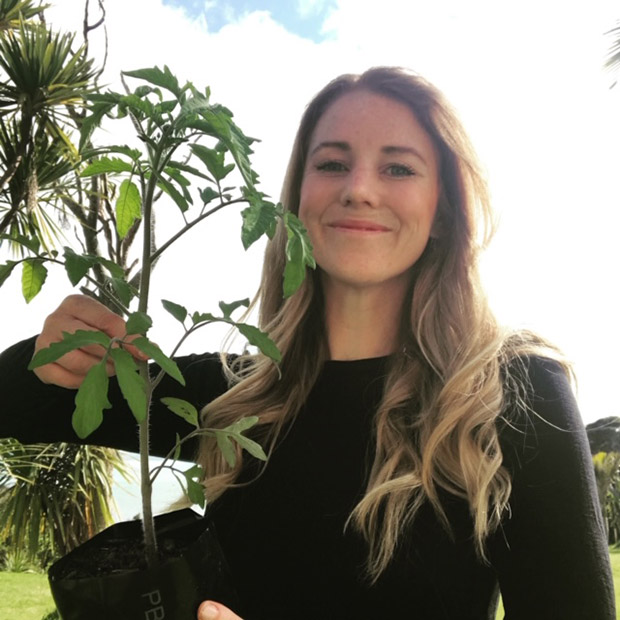 The secret, she says, is striking the right balance between the starch flour (such as tapioca or potato) and wholegrains. Too much wholegrain makes the bread too heavy, while too much starch means the sourdough metabolizes too quickly and the crumb doesn’t hold together.

Lucy’s loaves were also highly palatable and very attractive, so much so she’s started a business called Lucy’s Gluten Free with the owners of Volare, a popular artisanal bakery in Waikato. Together they have a purpose-built gluten-free kitchen in Hamilton where Lucy will bake the bread on a commercial scale, starting with three sourdough varieties, with launch planned for late February. 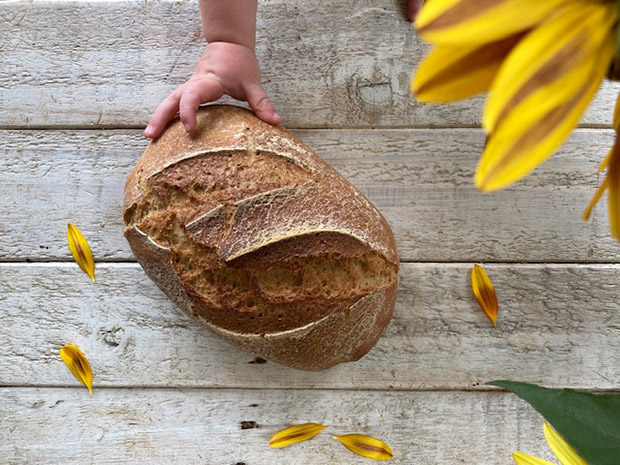 Initially the bread will be offered in Volare’s retail bakeries and to their wholesale customers, and as home delivery around Waikato, Tauranga and Auckland. However, Lucy is experimenting with how the loaves hold up when couriered further afield.

Lucy herself is perfectly happy staying put on her Raglan property, which is entirely unrecognisable from when she and Elliot moved onto in 2014. 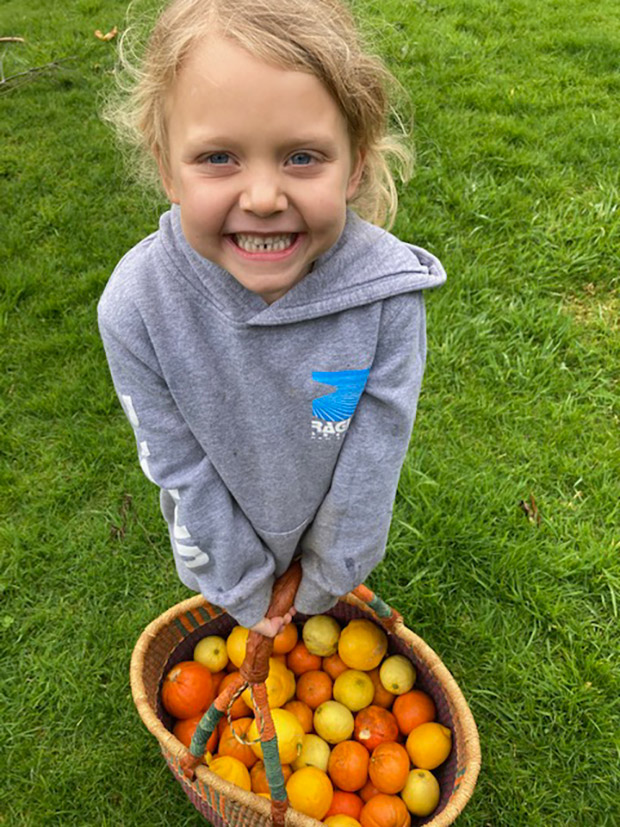 “But anyone can do this using whatever space they have. My advice is to start small. I started with those two garden beds, but if I’d gone all gung-ho in the beginning, it would have been overwhelming and I’d have gotten nowhere.

“I am proud of what Elliot and I have built here. There’s nowhere else I’d rather be.”

THE MAGIC OF MULCH

While Lucy Donaldson can grow almost anything in microclimate of her Raglan property, she still faces challenges. “Our main concern is the water supply, as we can go weeks without rain. When I can no longer water, I bucket out the kids’ bathwater as not to waste it, and I mulch a lot and hope for the best.” Lucy’s mulch includes chopped up banana palms that she grows in the family’s greywater runoff, as they hold a lot of water in their trunks. Lucy chops the palms down, slices the trunks up and scatters them around her fruit trees. The palms quickly send out “pups” to regrow, and the cut-up banana trunks decompose, hydrating the trees while covering and protecting any bare earth.

“I also use arborist’s mulch, which has a good mixture of brown and green mulch. This composts down really well, adding organic matter to the soil and breaking up the clay.”