My wayward wheels: from mountains to the sea 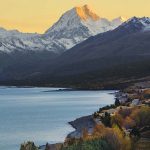 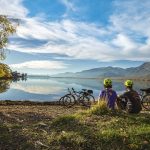 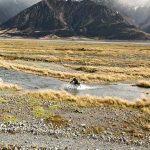 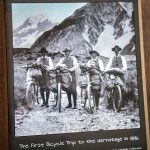 Like a Japanese watercolour, the Ohau Range is silhouetted behind Lake Benmore 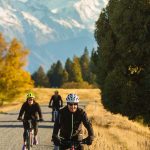 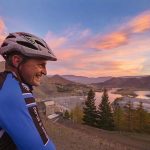 Neil takes in the vista from the top of the Benmore Dam. 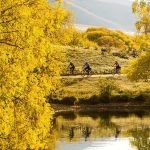 Cycling through Pumpkin Point on the shores of Lake Benmore. 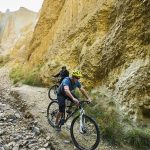 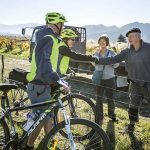 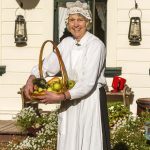 Alison Albiston, co-host of Burnside Homestead, dresses the part for her guests as she gathers produce from her kitchen garden

Riding 300 kilometres on the Alps 2 Ocean cycle trail can be hard work  but it’s worth every turn of the wheel.
Words: Nathalie Brown
Photos: Brian High

“She’s climbing like a lovesick angel today,” Heliworks pilot Mark Hayes hollers into our earphones as we rock and lurch at 280kph in the turbulent winds on a two-minute ’copter ride across the Tasman River. He offers to take her around again, this time rising higher to give us a broader aerial view of the braided river, a skein of silver and grey ribbons glinting in the sunlight and surrounded by snow-dusted mountains.
It’s less than an hour since we mounted our bicycles at Mt Cook village on the first of a five-day Express Alps 2 Ocean cycle tour. We’ve already ridden the rough, pebbled cycle track through a landscape of tussock and thorny matagouri bushes with olive-grey crags and peaks looming through the billowing mist on either side. Mark drops us gently on the far side of the river where russet autumn willows and green-black pines embroider the gravel banks.
Another hour of biking brings us to Braemar Station and a foreground of glinting, rolling, high-country sheep paddocks edged with autumn-yellow poplars under an impossibly blue sky. In the middle distance, golden foothills give way to the snow-spattered peaks of the Southern Alps. And there Aoraki/Mt Cook stands gleaming, head and shoulders above the rest. And so it is for five days – the landscape utterly different and remarkable every hour or so.
There are no fees for using the A2O trail and cyclists have the choice of going DIY or engaging the services of any one of several tour operators. Accommodation options range from freedom camping and motor camps to backpackers, country pubs, motels, B&Bs, private homes and lodges.
Cyclists can enter and leave at any point along the way. With 112 kilometres of dedicated cycle tracks completed, the A2O is still under development. Most of the trail is on gravel and blacktop back roads where there is very little traffic but at this stage cyclists still ride 37 kilometres on State Highway 83 in the Waitaki Valley. Says our tour operator Rob Connolly, who is also an outdoor pursuits teacher, “The trail is graded 2-3 or intermediate, which offers enough of a challenge to give most bike riders a sense of adventure, taking them beyond their normal cycling experience while still being achievable for anyone with average fitness. Most of the people who ride the A2O are aged from mid-50s to early 70s although one 81-year-old has ridden the entire trail with me twice.

The surface of the trail varies. It’s not all rough as guts, but those rough patches are part of the adventure of biking.”
So, it’s true, are saddle sores and an aching undercarriage as we realize during the 80-kilometre ride on day two of Rob’s Express Tour. And here’s the big tip for bicycling beginners: anyoneplanning to ride 300 kilometres in less than a week needs to get on their bike for several hours every other day or so in the month leading up to the trip. Fitness gained through running, walking or playing squash simply won’t do it. What’s required are muscles attuned to a continual cycling motion and the development of leathery nether regions. Tick that box and the express trip’s a breeze.

Several tour operators offer different A2O packages. Rob’s eight-day/ seven-night trip suits those who don’t want to push themselves too much. For them a leisurely 40 to 50-kilometre ride each day, with stops to enjoy sumptuous elevenses, lunches and afternoon teas, is just the ticket. But our five-day/four-night express tour, with two days biking about 80 to100 kilometres, is designed for people made of sterner stuff. Riding in the van for much of the time is always an option. In that context, I rode an electric bike when I rode at all. You could tell it was an e-bike because everyone who trialled it would set their faces in a broad grin and go “Eeeeeeeeeee” for the first few metres until they became used to the sensation of being borne along with only the slightest effort on their part. I had a splendid sense of achievement in pedalling at 17.5kph in a stiff head wind.
The e-bikes are being trialled by several tour operators because they suit the needs of less seasoned cyclists.
However, the experience of riding the A2O is about much more than biking and taking in the views. That was the consensus we reached on the last night of the trip, as we shared a meal at Oamaru’s multi-award-winning restaurant Riverstone Kitchen. There’s great pleasure in getting to know fellow travellers but most particularly in being exposed to so many different Kiwi ways of life in just a few days.

When we stayed in the shearers’ quarters at Braemar Station, we sat around the open fire in the evening talking with the owners, Julia and Hamish Mackenzie, about schooling options for kids in an area that is still relatively isolated. The following night most of us enjoyed a few post-prandial whiskys in the pleasantly worn lounge of the Lake Oahu Lodge with hosts Mike and Louise Neilson (in A2O parlance this is known as ‘getting Ohaued’) while teasing out details of the potential offered by the trail to the local community. 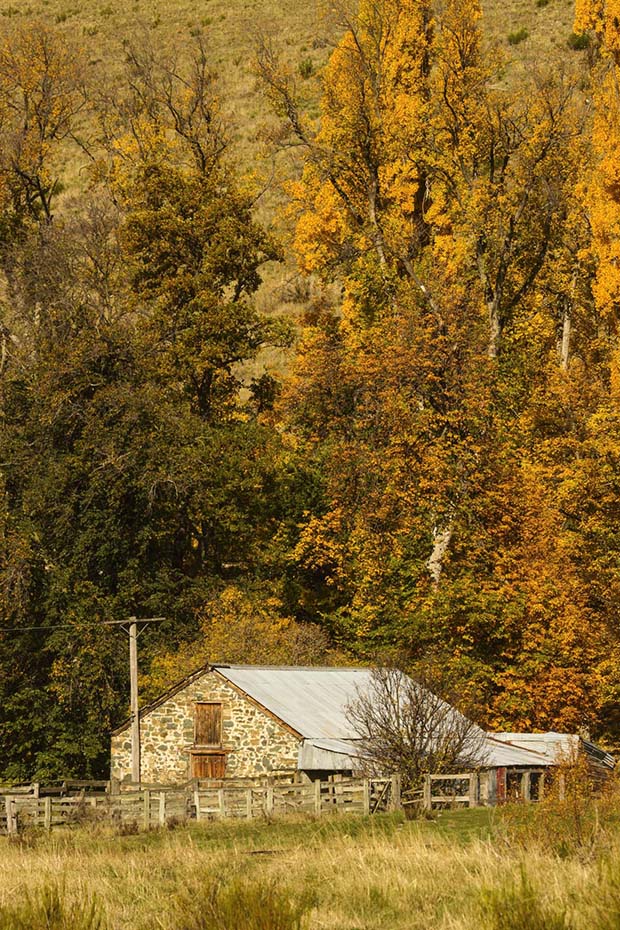 A 19th-century stone building stands at the turn-off to Lake Ohau Lodge.

We ate like royalty in the ultra-modern private holiday home where we stayed in Otematata, the meal being catered by a chef from Fleurs Place in Moeraki. And we spent an evening of grace and elegance with Bruce and Alison Albiston in their 1870s Burnside Homestead in the Waiareka Valley.
Most of these people have lived in the area for 40 years or more and every one of them marvelled at the increase in business they’ve seen since the A2O opened in the summer of 2012. You could call it a cycle-trail led recovery in the local economy. 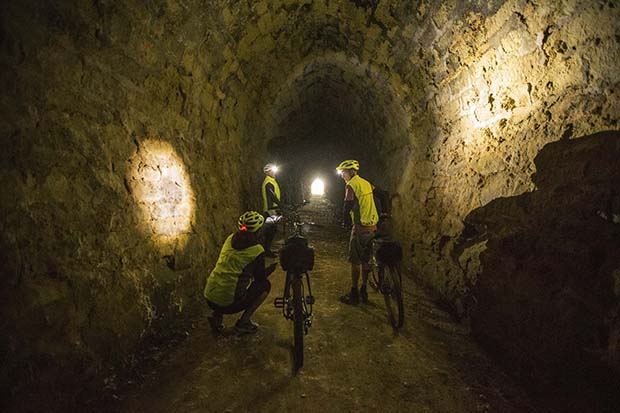 Cyclists follow the trail through the Rakis tunnel on the disused Windsor/Tokarahi railway line.

NOTEBOOK
Costs: There are no fees for using the A2O cycle trail.
Daily bike hire: $45 for entry-level bikes, $80-$90 for high-end mountain bikes and from $100 per day for electric bikes.
The helicopter ride over the Tasman River costs $120 a head, minimum two. Some cyclists are entirely self-sufficient while others engage a tour operator for a fully guided and managed tour. Other operators offer everything from simple cycle hire to the full service excluding a personal guide. Prices vary accordingly.
How to get there: Most tour operators provide a shuttle service between Christchurch, Dunedin and/or Queenstown airports and the designated A2O starting point. It takes 3-4 hours to drive to Mt Cook from any of these centres and there are daily bus services to Mt Cook from Christchurch, Queenstown and Twizel.
What to take: Well-padded bike pants. No matter what time of the year, several thermal tops and leggings – items that can be easily added or taken off – also cotton t-shirts for those 30°C+ days in summer plus a lightweight rain jacket. Insect repellent and lip balm, Vaseline or pawpaw ointment for the saddle chafing. If you are on a guided tour, pack at least one après-bike outfit for casually elegant dining.
For more information: alps2ocean.com

THE ROUTE
Alps 2 Ocean is the longest of the 23 cycling trails that have been developed throughout New Zealand since 2009. In the space of 300 kilometres, it lowers cyclists almost 800 metres from the alpine village at the foot of the country’s tallest mountain through broad tussock land, around turquoise glacial lakes, alongside a high-tech canal system and into the deep Waitaki River valley with its hydro dams, lakes and paper-bag-brown sheep country. The trail then glides down through lush green dairy-farming pastures in the Waiareka Valley and delivers cyclists to the edge of the Pacific Ocean at Oamaru. To read more about the Alps 2 Ocean trail and discover the hidden gems of the Waitaki Valley, purchase a copy of The Insider’s Guide to New Zealand 2016