What makes some people great? The documentary Chasing Great, featuring one of our best All Black captains ever, promises some answers. Emma Rawson eagerly takes a sneak peak at the trailer.

He’s the most-capped All Black in history and the only rugby captain in the world to win back-to-back World Cups but who is Richie McCaw? A new documentary Chasing Great hopes to capture the man behind the hype.

Chasing Great, which opens in cinemas in September, dramatises Richie’s childhood in Kurow including the seminal moment when he wrote down his goal of becoming a ‘GAB’ (Great All Black) on a serviette.

The trailer, released Wednesday night, shows the personality and determination of the former Crusaders flanker and follows him in the lead-up to his final All Black season. It includes interviews with his family, friends and support crew.

Although Richie stayed away from the limelight during his All Black career and rarely did personal interviews, he sees Chasing Great as his chance to inspire a new generation of athletes.

“I was always quite keen to make sure I kept some of the private stuff private, not for any reason other than I just felt that was the right thing to do”.

Richie says one of the reasons for him taking part in the documentary is to try and inspire young kids by showing them that successful people don’t necessarily have a super-human talent.
“I took a lot out of the opportunities I got. It’s not something magic; it’s a bit of dedication, hard work – those sort of things that, allow you to fulfill those dreams,” he says. 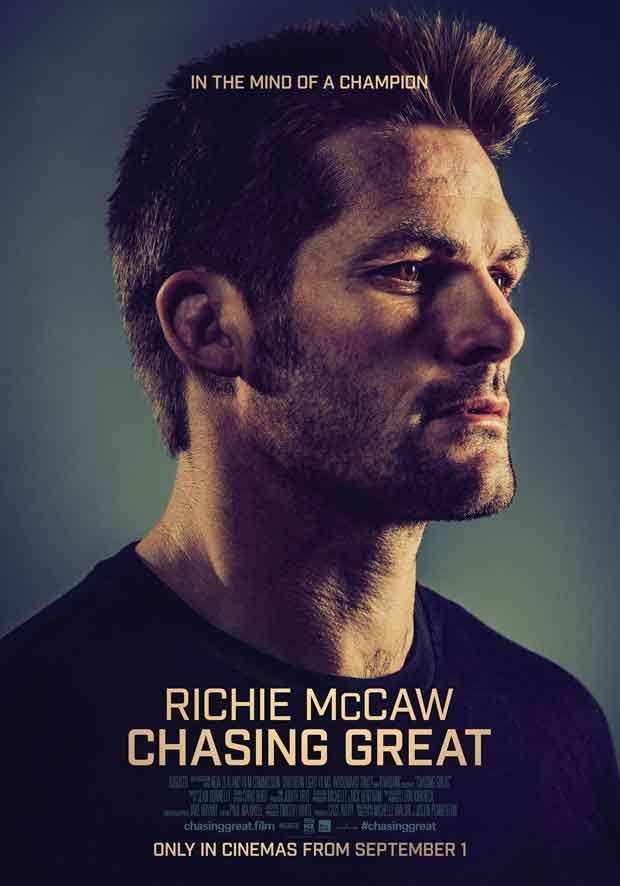 The cinema poster for Chasing Great.

The soundtrack for the documentary trailer Everybody Wants To Rule The World is by Lorde, another New Zealander performing at a top level on a global stage. Director Justin says he and Michelle were interested in capturing the drive of a high-achieving New Zealander.
“Ultimately, what grabs me are stories about people who are extraordinarily driven, and the sporting arena is rich with inspiring, passionate people – and it’s the intriguing character study that really excites me,” he says.

Chasing Great is in cinemas nationwide on September 1 and Richie will walk the red carpet at the World Premiere is at The Civic Theatre in Auckland on Tuesday, August 30.