New wearable pet sensors will not only find Fido, they can also report on how he’s feeling.

New Zealand’s great catch-cry used to be that it was a country of three million people and 70 million sheep. While sheep numbers have greatly diminished in recent years, New Zealanders are still outnumbered by their pets. In 2016, the New Zealand Companion Animal Council reported that Aotearoa had a pet population of 4.6 million, with 65 per cent of households including at least one. These finned and furred friends – cats, dogs, birds, rabbits and horses among others – are worth a lot, with devoted pet owners spending an estimated $1.8 billion on products and services. It’s no wonder some clever New Zealanders are helping people keep tabs on their pets via wearable technology.

CATS AND DOGS
When one of his staff members had to spend a day looking for his mother’s missing yorkshire terrier (only to find it 20 metres from home, hiding under a car), Eric Lin had an epiphany. His Auckland company Lintek already made tracking devices for everything from luggage to vehicle fleets and boats. Why couldn’t it track pets too?

Because they were limited by technology available at the time, Eric and his team initially decided they would design a proximity alarm that would send an alert to a small remote unit if a pet went AWOL.

“We sold a few hundred, then realized there was a real market,” he says. “All our staff have pets, so we know exactly how people feel when their animals go missing.” 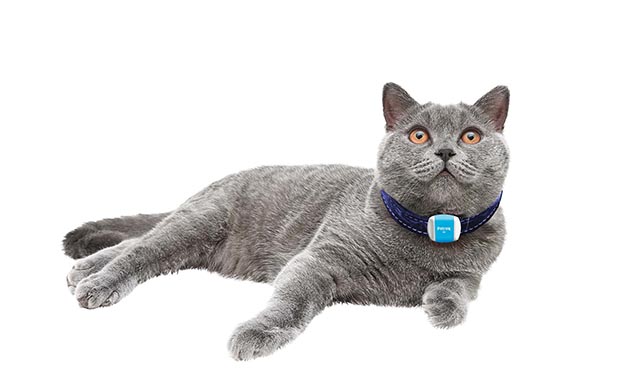 Petrek tracker which is waterproof for up to 30 minutes, works with a mobile app and weights just 30 grams.

Now, some seven years after that naughty yorkie ran off, Eric’s spin-off business Petrek offers owners three ways to keep tabs on pets – using radio frequency, GPS and 3G technology. He says the newest model, Petrek 3G, is the smallest of its kind in the world. The tracker, which weighs just 30 grammes and is fully waterproof for up to 30 minutes, works with a mobile app to pinpoint the pet’s location. The app can even compile up to a month’s worth of location data into a heat map to show where the pet’s favourite secret hangouts are.

“Pets are habitual,” Eric says. “After days and nights of tracking them you realize they always go back to the same spots, they always pee behind the same tree.”

He says 70 per cent of buyers are cat owners (“cats like to go off on three-day adventures”), but they have heard that some people buy them to keep tabs on human household members too.

Eric says the trackers serve several purposes when used for pets – both monitoring the animals and changing owners’ behaviour. “It’s a bit like we are training the owners,” he says. “If dogs aren’t walked regularly, or taken on the same routes, then they go haywire and run off to random places when they do get out.

“We say to owners that when the dog is walked regularly, especially on the same routes, the tracker will show that if it does escape then it will go to the same spots and find its own way home. So it reminds people that they need to get out more with their pets, and it also gives them more trust in them. Having a tracker makes people feel less insecure about having their animal wander off.

“People start to treat the tracker like it’s their dog’s smartphone,” he laughs. “You know how people keep track of their kids with their phones? That’s what they are like with the trackers. If our app is down for maintenance or something is being fixed, people panic about their animals even if they’re in the next room.” KEEPING TABS
While the Petrek products concentrate on an animal’s whereabouts, a Wellington-based company is more concerned with tracking wellness.

The Heyrex wearable monitor collects data that can be used to help vets and owners provide better care for pets. The monitor, often dubbed the Fitbit for Dogs, owes its existence to David Gibson. The Karori scientist and dog lover started working on a prototype version back in 2004, keen to devise a way that would help people understand their animal’s behaviour and health. But he died in 2011 before his innovation could be properly commercialized. 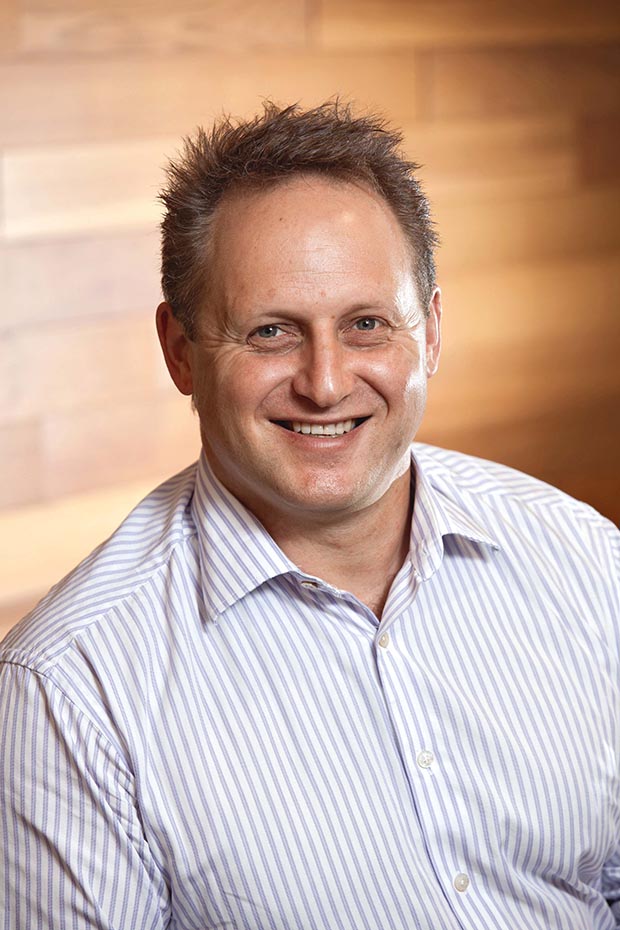 “David’s idea was before its time,” explains Heyrex chief executive Nathan Lawrence. “His vision and his understanding of what could be achieved is something we’ve followed all the way through, even though technology changes so quickly.”

Heyrex monitors record and collate uninterrupted, real-time data on animal behaviour, such as health issues, exercise levels, scratching and sleep quality. The unit, which clips to a dog’s collar, “talks” to a base station (like a cellphone tower) in the home or a vet clinic, which then sends notifications of any changes or problems. The monitor has a minimum two-year battery life and doesn’t need to be recharged.

While the product was initially aimed at helping vets manage pre- and post-operative care, the monitors are now available for owners who want to be proactive about their pet’s health.
Nathan won’t disclose specific numbers, but says that thousands of Heyrex monitors have gone into the market, especially in the United States. 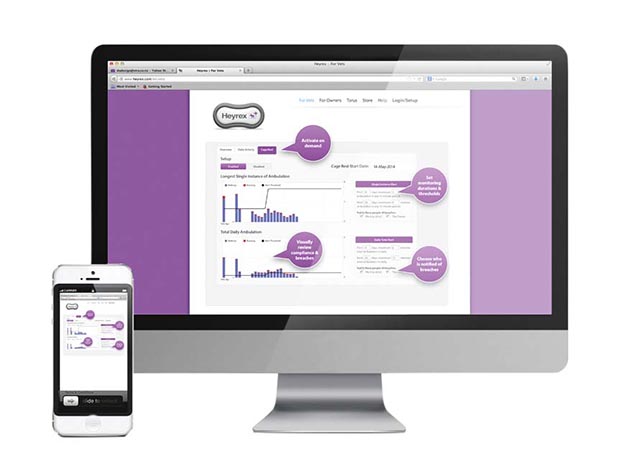 Heyrex monitoring on a computer and mobile device

The algorithms driving the data collection are designed for dogs, but Nathan says the monitors are being used for other animals – Sydney University uses them to study the habits and mobility of tigers, for example, while American researchers are using them on cattle.

In New Zealand, 150 dogs have been fitted with the monitors as part of a research project by Vetlife and Massey University’s Working Dog Centre (see right). Technology, both wearable and otherwise, is going to change the way pets are cared for, Nathan says.

“We’re going to have so much more understanding of things like how pain affects animals and how we can help. I think technology will also have a huge impact on disabled animals, with things like stem-cell research. Animals are going to follow all the developments in human science.” A sheep dog musters the flock at Paua Bay Farm, on the Banks Peninsula, New Zealand

It’s a dog’s life
New Zealanders love canine companions. Nearly 30 per cent of New Zealand households keep an estimated 700,000 of them as pets, and there are about 200,000 working dogs putting in the hours for human masters. While working dogs perform crucial roles for law enforcement and emergency services, not to mention as guide animals, the majority of the local dog workforce is found on farms.

Thanks to advances in wearable technology, researchers at Massey University’s Working Dog Centre are hoping to learn more about farm dog behaviour, activity and wellbeing. The project, A year in the life of a working dog, is part of TeamMate, a five-year observational study of 700 working dogs run by Vetlife vet clinics.

Dogs on 50 South Island farms will have Heyrex monitors fitted to their collars to capture their behaviour, sleep patterns, temperature and activity. This information, along with physical examinations done as part of the TeamMate study, will give researchers new insights into the lives of these hard-working animals.

“Without the wearable tech, we had no way of really knowing what was happening,” explains Dr Naomi Cogger, director of Massey University’s Working Dog Centre. “For the first time ever, we are going to be able to have really detailed information about health problems encountered by working farm dogs – how much time they spend running, and walking and scratching, whether they are cold or hot at night. We’re so excited about it. It means we will be getting high-quality data that could not be replicated any other way, with minimal intervention from the farmer’s perspective.

“It means the potential to improve dog health and wellbeing is huge.”

While robotic companion animals are starting to appear overseas, Naomi doesn’t think they pose a threat to how New Zealanders relate to dogs. “If you think about police and detection dogs, a good one can be out detecting 100 different scents at the same time. It would be very difficult for a robot to be programmed to do that at the same speed.

“I don’t think it’s likely to happen with farm dogs, either. Working dogs on farms are thinking and working with the stock, and responding to a very changeable environment all the time. It would be very hard to programme a robot to continually learn to react to stock changes. I see dogs continuing to work for people for a long time.