Susie McCutcheon and Chris Miles with their distinctive 1973 Holden Torana.

It begin with a small boy, egg and chutney sandwiches and an outing to Ohakea. “I remember the excitement of queuing for tickets with Dad and standing beside him as cars roared around the aerodrome circuit. It was the start of my fascination with motorsport and Mum’s legendary sandwiches became a staple during my own racing years,” says Chris Miles.

That boyhood enthralment at the Wings & Wheels Classic Motorsport meeting in 1958 led to teenage membership of the Manawatu Car Club, track building at Manfeild, flag marshaling, and a decade of go-karting. The late Australian motor-racing legend Peter Brock was Chris’ hero. When the Aussie great cleaned up the Ford V8s at Bathurst in 1972 in a modest, six-cylinder Holden LJ Torana GTR XU1, Chris caught the Torana bug.
And the bug burgeoned. When he drove in a pal’s purple LJ GTR XU1 pocket rocket on the roads around Feilding, the exhilaration of the engine noise and the thrilling suspension got under his skin.

He was 25 years old when he pledged one day he’d have his own. “There were only about 1200 of the LJ GTR XU1 model ever made. They were a high-performance car designed to compete in the Australian Touring Car championships – in particular at Bathurst. They’re a classic Aussie muscle car, so fast and unbelievable fun.” As it happened, when Chris Miles was 44 years old, fun with a feisty set of performance wheels was a welcome antidote. “I was working in Wellington in the insurance industry when my marriage dissolved. We had two daughters and we sold our family home. I was looking to cheer myself up and searching for a Torana GTR XU1 filled in the gaps.”

Chris says discernment was required during the shopping phase. “There are some fake XU1 models out there – standard Torana models disguised to look like the genuine article.”
It was an advertisement in a classic car magazine that delivered Chris a highly authentic result. Into his life rumbled a 1973 LJ Torana GTR XU1, authenticated by General Motors Australia and painted in an official Holden XU1 colour, Strike Me Pink. Chris named her The Pink Lady. “It was my divorce present. I flew to Auckland to view it, deliberated for 24 hours then drove it back to Wellington. I loved it from the outset. It’s a bit of a jaw-dropper and looks like a boy-racer car. I was chased by the cops three times on the way south, but they backed off when they saw an older guy behind the wheel.”

Chris initially bought the car with regular road driving in mind. “It is a car you can race on a Sunday then drive to work on a Monday.” But a move to Auckland saw him mingling with car-racing mates. Along the way, he met his wife, Susie McCutcheon. “The car had seven previous owners but had never been on the track. We got it going better. We increased its horsepower, added Dell’orto carburettors, a roll cage, a race seat and five-point racing harness, race gauges – a rev counter, water temp and oil pressure – lowered the suspension and ran it on high-octane Avgas. I still have the receipts but would never want to add them up.”

Planned weekend jaunts were replaced with eight-lap races, a double-layered driving suit, crash helmet, pouring sweat
and adrenalin.
In a poignant coincidence, Chris’ inaugural race was at a Wings & Wheels meet at Ohakea in 1996 where he had stood as an awe-struck eight-year-old with his father and his packed lunch.

More stories you might like:
Carolyn Simon shares her experiences building a cordwood home in Golden Bay 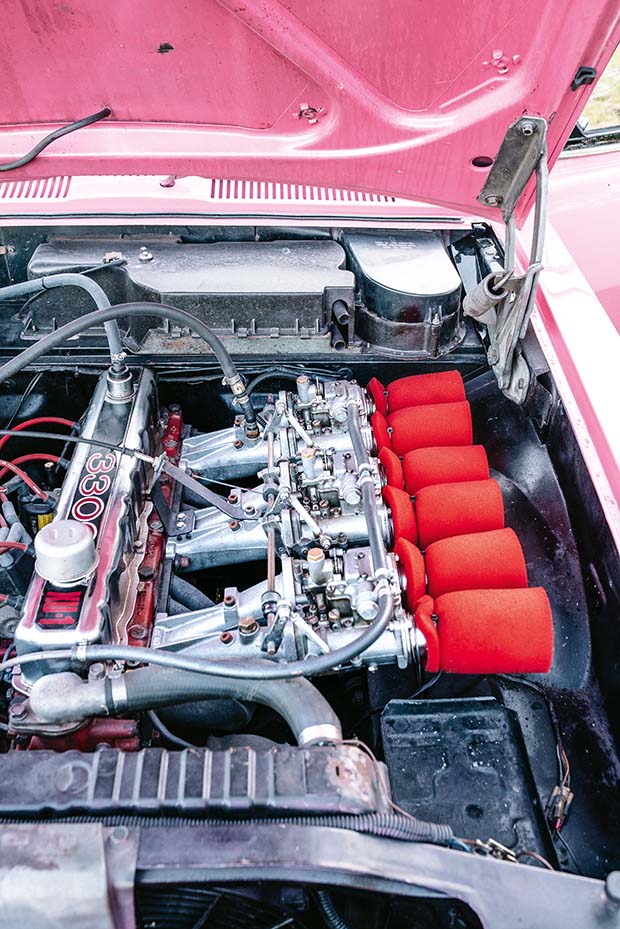 For the next 15 years the tracks at Pukekohe, Whenuapai, Taupō and Manfeild were core destinations in Chris and Susie’s lives. “It was gentlemen’s racing. I loved the participation, the camaraderie and we’ve made great friends. We were never the fastest – we had a four-speed gearbox and ran out of puff at 220 kilometres an hour – but we were probably the most original XU1 on the track.”

Susie was pit bunny and catering manager – with her own version of egg and chutney sarnies. “I’ve mopped quite a few sweaty brows and the smile on Chris’ face when he drove off the circuit was always wonderful. The car has given us so much joy.”
That joy now continues in a new phase of life and corner of the country. In 2012, Chris made the call to quit motorsport, initially swapping a gear stick for a hammer and helping to build the couple’s new home in Hawke’s Bay.
The Torana GTR XU1’s roll cage has been removed and its suspension softened but its 202-cubic-inch, 3.3-litre high-performance engine remains, along with other accoutrements – its factory-fitted, long-range fuel tank, a fire extinguisher by the feet, specialized race gauges on the dash and its Holden windscreen logo. When Chris and The Pink Lady boom around the Bay on a monthly outing with fellow classic car buffs, she runs on a boosted 98 octane pump fuel, not Avgas.
On a stretch of flat straight road, Chris opens the car out. The Torana’s vocabulary is loud and proud. “It was never a car to go and buy a loaf of bread in. No power steering, no choke, no heater. It rattles, it’s lumpy, it’s raw – racing is its pedigree. Petrol consumption is very thirsty – about 28 litres per 100 kilometres. It’s not something you want to ponder for too long.”

More stories you might like:
Video: Take a tour of Rory Harding's George Street Orchard in Dunedin

Chris had a mechanic as part of his crew during his racing years but now handles his own maintenance. Despite the stresses and strains
of racing on transmission and brakes, the two-door coupe is in remarkable shape.

While fireproof overalls are a thing of the past, Chris is relishing the switch to relaxed touring. “I do miss the racing, but the sheer fun of driving hasn’t diminished one bit.”

Folklore says dropping a six-power plant into a basic Torana to fashion a Bathurst-tuned racer was a light bulb moment for
Holden’s top brass. Dubbed the “giant killer”, the GTR XU1 is now rare, coveted and celebrated as one of Holden’s most successful sets of performance wheels.

The model name of Torana is derived from an Aboriginal word which means “to fly”. Chris Miles and his number one support person Susie would be the first to say the Torana has given wings to the past 20 years.

The king of Kombi vans

From Berlin to Blenheim: a 1974 Mark 1 Ford Capri on the road again