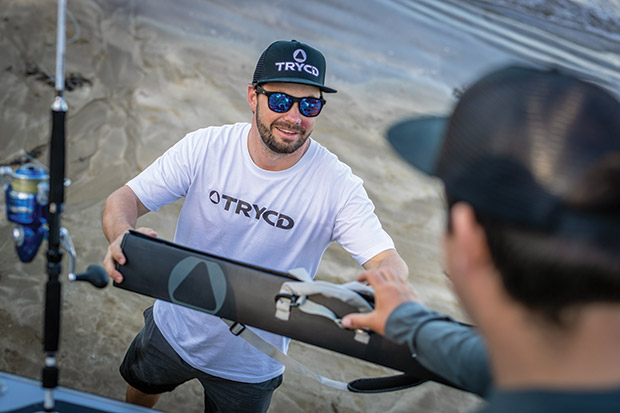 Decades after his parents began producing carbon-fibre fishing rods, Tom Johanson has designed an all-in-one rod kit to set the family business apart in an age of mass-production.

Marty and Sue Johanson knew they were onto something when they made a light fishing rod from carbon fibre. In the 1970s, the Manawatu couple, then living in the United States, learned of the material from an American engineer working on the SR-71 Blackbird project (the fastest aircraft in the world).

If aircraft design could be improved with the use of carbon fibre, why couldn’t a fishing rod? The Johansons returned home and, in 1981, set up a factory on Auckland’s North Shore to manufacture carbon-fibre rods for export.

“It was a game-changer then,” says Marty and Sue’s son, Tom, now co-owner of their company, Composite Developments. “But everyone makes rods from carbon fibre now.”

The international fishing-gear market shifted when carbon-fibre rods caught on, forcing Composite Developments to go up against overseas manufacturers. “Asian factories learned to replicate the rods for a tenth of the price. By the mid-2000s, we couldn’t compete,” says Tom.

The Johansons had diversified the company by adding the distribution of sporting goods, but rods had always been the priority. “My parents began the business to make things they loved,” says Tom. “That’s how our business works. We only sell products we use ourselves.”

When their Auckland factory closed, the family shifted the business’ focus to importing and distributing fishing rods in New Zealand, a strategy that now makes up 80 per cent of revenue. They also continued designing and manufacturing rods alongside a partner factory in China, but exports are currently a small part of the ledger. The global fishing-gear industry is expected to be worth $31 billion by 2024 so, to compete, Composite Developments needed to tackle it head on. Tom and the team started designing a new rod.

“The idea began with our biggest frustration with fishing. A fly rod usually comes in a tube that requires zipping and pulling the out rod,” he says.

Meanwhile, Tom waded through patent and trademark law to ensure their investment was protected. “Dad spent years perfecting rods but never had the money to protect his intellectual property.”

After three years, they launched the TRYCD ALLROD kit, which combines the durability of a traditional rod with the accessibility of a two-piece travel rod. The kit comes with a base that connects with up to four different attachments that all fit within a lightweight, foldable case.

While the new kit is currently available in New Zealand only, Tom has his sights on the markets to which Composite Developments already exports, such as Australia, the United States and Canada. Funding growth with domestic profits has been essential.

“My parents always did this as a passion project, so we’ve never had an outside investor. We have to make money at the same time to grow sustainably,” says Tom.

“We’re not interested in building up a brand to sell it. We want to do it ourselves and take our ideas to the world.”

Headwinds: With the market flooded with similar rods, getting a new product to stand out requires determination. “We work hard to show people that they don’t need to carry a seven-foot tube. A two-piece rod can be just as strong.”

Mission ready! Every rod your need for a land based trip out of the one case. With rods up to 8ft in length the options are plenty. #AllAccess #AllSalt #Alladventure #Trycd

Tailwinds: The online market for fishing gear is growing, especially compared with five years ago, which has helped Composite Developments increase its exports. “E-commerce is giving little guys like us a chance to reach farther parts of the world.”

What’s next? In 2020, TRYCD products will become available to wider markets. “Anglers across the world know and visit New Zealand for its incredible fishing, so they know we have the perfect testing ground for developing the best gear.”

Lesson: “Don’t get stuck in your bubble. In the fishing industry, we get caught in our ways, but there are many methods of doing things. Listen to customers, explore different options, and learn.” trycd.com