When a pig ventures close to home, six-year-old Vita discovers country living cuts a short track from food source to the table. *Warning this post contains a graphic photo some readers may find disturbing.*

Usually pig-watching is rated G in our household. Like tuning into some regular television programme, James and the children gather at the kitchen window just before dusk to follow the anticipated show.

‘There’s one,’ James will say to various excited shrieks and bravado-roars. But however animated the kids might get, it makes for innocuous viewing peering through binoculars at dark lumpish shapes snuffling up the opposite hillside. The thrill is knowing these boars are wild, rather large and now that winter has brought them down from the bush, really rather close.

There’s talk of a hunt and a hangi sometime soon, but in the meantime, the future roasts boldly go about their business on the other side of our valley while we grimace at their destructive trails.

The Sunday stroll was rated R16, on account of the violence. If we’d foreknown, we’d have walked elsewhere but it was a little like sitting down to a movie of Mary Poppins and watching her suddenly turn a meat cleaver on her young charges. The horror didn’t start until halfway through and by then it was too late to turn back. Maxime had arrived from Auckland for a leisurely lunch. Once upon a time he’d been our French wwoofer but since emigrating he’s like part of the family; a gregarious, avuncular-figure to the children and a much-loved younger brother to James and me.

Lunch was a roast vegetable salad, cooked in the wood oven and washed down with a bottle of homemade red gifted by somebody local. The heat, the heady wine and the home-grown food slowed the current of conversation to a lazy meandering around the table into which the children swooped and darted like metaphorical swallows.

The walk was to shake off the Sunday languor.

Winter sun adds dimension to the dripping forest, slanting across the bush-clad hills at low angles and illuminating individual trees around the valley with astonishing detail.

I love how we step from the house into wilderness. After years of outdoor living, James and I still sometimes pinch ourselves to believe we now have so much warm, dry space but being indoors also brings division, separating us from the trees marching over the ranges.

Outside I breathe in the forest, back in its vast living green again.

The fresh air pulled us upright as we left the house. Three-year-old Zendo took off, competing with his sister and Pax, the family dog, to be first to the other side of the valley.

Across the gully, six-year-old Vita clambered onto the rope swing. Behind her, on a mound, I saw Pax sniff the air. When he leapt, he fired like an arrow.

The sudden screaming confused us at first. Then, “Pig,” I yelled.

Freeze-frames followed. There’s James and Maxime suspended mid-air as they leap down the hillside. There’s Zendo wrapped around my thigh with eyes wide. Vita is a statue with her hands to her mouth.

And me? I’m frowning, straining to see and listening for all I am worth. Who’s maiming who? The terrible shrieking and squealing is a life on its edge. Is it Pax or a pig that is dying?

We ran to that desperate noise and found a piglet caught in Pax’s jaws, being shaken with disturbing savagery.On command, he released it but it was too broken to save. Grimly James ended its suffering with his knife while the children wept angrily at the cruelness of the world and I ushered them back for fear of an attack by its hidden mother. 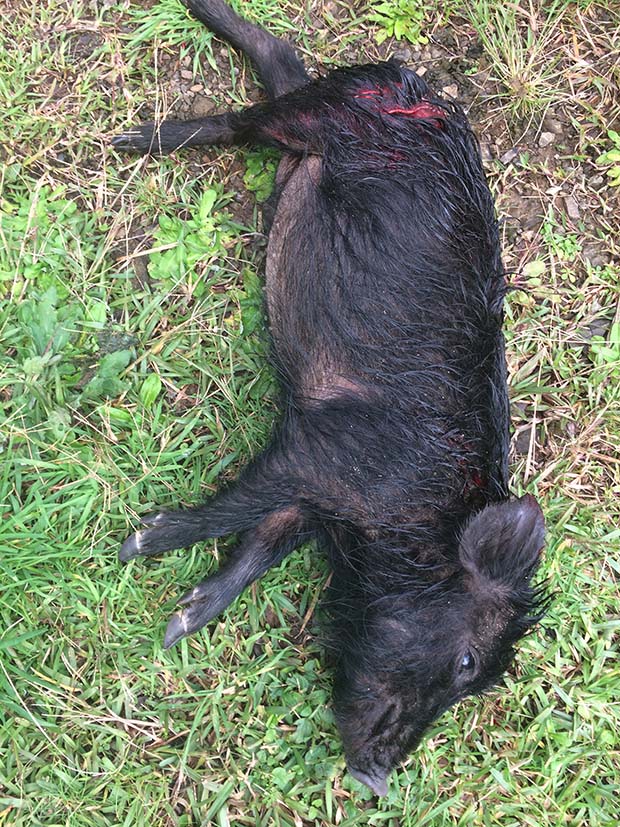 “How could you?” Vita screamed at the blood-streaked killer who’d been masquerading as a family pet. Pax wagged his tail.

The piglet came home to be roasted. Our guests gathered near as James butchered it, suddenly keen to stay on for dinner while Zendo, tremendously excited, rushed past with food scraps to scatter over the driveway in an attempt to lure in another.

Meat-loving Vita cried her eyes out on the couch.

Is it a bad thing for an omnivorous child to realise where meat comes from? That every meal of steak, sausages or chops began with an animal’s death.

“You eat lamb,” I gently reminded her. “That’s a baby sheep.”

Only because the raw truth of life and death. The relationship between predator and victim is usually sanitised by tidy packaging that belies an animal’s terror and lethal bloody wounds. Country living cuts a short track from food source to the table.

I half-expected an announcement of vegetarianism. When Zendo ran in to announce the piglet had been a girl, Vita cried even harder. Somehow that knowledge made it so much worse.

But when she inspected the roast coming out of the wood-oven, she laughed in relief. The cute little piglet was gone, replaced by a lump of food wafting enticingly at her nose.

“It was already dead mum. I mean, we can’t just waste it.”

This was dinner, not an ethical quandary. As far as she was concerned it was rated G for goodness and she was first in line for a serving.