When her seven-year-old expresses foul-mouthed fury, Polly reviews events in her own life that should have provoked absolute outrage but left her confusingly silent.

There were enormous television screens in almost every room. There was also a private elevator. Our off-grid, unplugged children, freshly arrived at their grandfather’s new apartment, hastened to explore the technologies. While seven-year-old Vita commandeered a remote to gaze rapturously at wedding and cake-making shows, four-year-old Zendo disappeared into the elevator to ride between levels. Outside, Lake Taupo was dazzling.

We’d come for a family Christmas; converging with James’ siblings, various in-laws and outlaws and their combined tribe of lanky teenagers. There were lakeside barbecues, boat rides and swimming. Rollicking Christmas feasting and dancing countered any languorous lounging.  Mere mortals in the company of demi-gods, our kids traipsed adoringly after the big boys and girls. Vita grew an inch every time her delightful female cousins shone attention on her while Zendo expressed his excited affections by pummelling the young males towering genially over him. 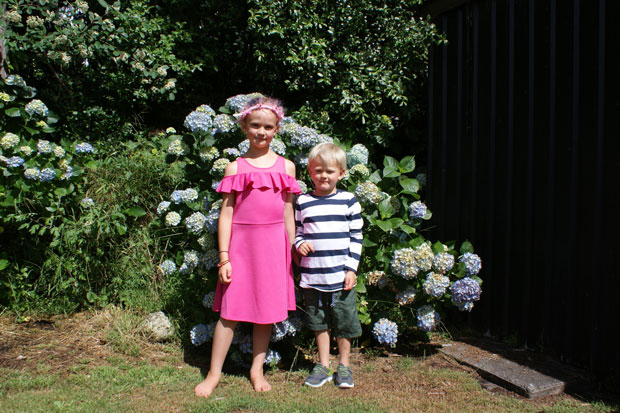 Vita and Zendo on Christmas Day 2018.

Every time we returned to the apartment, our daughter quietly disappeared to feed a television addiction, turning into an effigy of herself as she gaped at whatever was on. She slunk slyly to another room when we switched it off. Meanwhile Zen rode the lift.

It was inevitable he would eventually get stuck between floors. Name a child who can resist the temptation of pushing all elevator buttons simultaneously? Vita’s hysterical screams brought the drama to our awareness. “Get him out, get him out,” she screeched on the ground floor, banging frantically at the sealed elevator shaft. A distant muffled wailing answered.

By the time our tear-stained son emerged, elevator rides were emphatically out of favour. Meanwhile, Vita remained glued to a flat screen right up to the moment we departed for home. Once the car was packed and all summonses had fallen on selectively deaf ears, James finally strode in and snapped off the TV she was watching. Like Eliza Doolittle in Pygmalion, our well-mannered child transformed into a foul-mouthed guttersnipe as emotions flared.  “What was that?” her startled grandfather asked as she stormed from the apartment in a blaze of expletives. She turned up the volume for his benefit. “I said ‘f*** James! I hate him. F*** the world. I f****** hate it. F*** everybody. I was watching that! You can all just f*** off.” She wrenched the car door open furiously.

“Vita,” I began, but our charming daughter in her ringlets and pink Christmas dress was still raging. “It wasn’t finished. I was still watching it and I f****** hate you too.” Her grandfather gaped. James started the engine. It seemed like the right time to go. There were reprimands of course. As the car headed north, we lectured on inappropriate language and rudeness and expressed our disappointment, but later, when those in the backseat had fallen asleep, I confessed to James that part of me felt like cheering. The world needs feisty girls. Vita will learn alternate ways for expressing fury, but I’m glad her spirit hasn’t been smothered by the sort of conditioned niceness that keeps women’s mouths shut when they’ve been wronged. I hope she always fights for her rights.

If the world’s to transcend the Me Too epoch, our daughters must feel entitled to their anger. Let them roar like lionesses when they’ve been maltreated, strong in the knowledge that it’s never okay to feel sexually harassed or assaulted. May their flexed claws carry the weight of a supportive society behind them, so that any approaching offender thinks twice and turns away.  I have my own Me Too stories. There was a beach party rape I never reported because I blamed myself for getting so drunk, even though I distinctly told the guy, no. In India, a man claiming to be a masseur locked me in a room and groped and pawed while I curled into an ever-tighter ball, waiting for him to unlock the room so I could get out. I didn’t report him because I felt so stupid for being duped. In Chile, a man tried to push me over a cliff on an early morning coastal jog. As I stood shaken, bruised and bleeding in the backpacker’s later, the manager told me the police would be unsympathetic; that I was asking for trouble by venturing down lonely roads in running shorts. I caught the next bus out of town.

In Egypt, a guide blocked my way and groped my breasts above the Valley of the Kings when James and I refused to pay him more money than we’d all agreed. It was James who felt the fury I should’ve carried. He thought it a given that we march at once to the tourist police. Although upset, I wouldn’t have registered the incident on my own. When a doctor in Iraq also touched me inappropriately, I exited quietly. What is this stifling niceness I’ve been raised with that has allowed me to tolerate such breaches of physical boundaries rather than make a scene? I don’t consider myself a victim, but on reflection, I’m puzzled by my reaction to so many incidents. Where was my absolute outrage? When mugged in Peru, I ran down my attacker and punched him in the face. But that incident wasn’t sexual. I certainly never blamed myself for his robbery.

What subliminal messages have I received to be so accepting of men’s sexual misbehaviour? Am I weak? Has my silence made me complicit in the culture of sexual abuse? My mother shakes her head sadly at my messy questions. She was bound from childhood in that fake niceness too; where “good girl” was synonymous with quiet, well-behaved and obedient.  In a London office, I once looked up from loading photocopier paper into the machine to discover every man was on the floor bent sideways, attempting to look up my skirt. They all laughed as I blushed, unapologetic in their laddishness while I tried to be a good sport about my humiliation.  Stuck in the same situation, I hope Vita would tell them to eff off.

If we want upcoming generations to change our world for the better, they need to know their anger is a tool. Used correctly, it is fuel in the good fight; a rage that gives backbone, empowering individuals to stand up for their rights and shout out about violations. I hope this anger helps topple the power structures that keep people quashed and shuts down the environmental destruction that has resulted in an ailing earth. So we scolded our daughter for swearing like a trooper at Christmas but not too much. Lickings, we all agreed at the next small town, were best reserved for ice creams.