Polly Greeks’ Blog: The kiss that cost a friendship


Polly’s seven-year-old daughter gets a lesson on relationships after she steals an innocent kiss from an exciting new visitor.

It was a lesson in consequences; an early example of ramifications in the wobbly world of boy/girl relationships. He arrived with his dad for Easter; an eight-year-old with a partiality for Lego and scatological jokes.

Although they hadn’t yet met, his presence was eagerly anticipated by our kids who’d built an obstacle course in his honour. They whisked him up their tree-house as soon as they’d been introduced.

The following day they wished to show him our bushwalk. The circuit begins at the back of our house, follows the ridge around the rim of the valley and delivers us onto our front lawn some two hours later. There’s magic in our forest; some potent force that leaves guests glowing and invigorated by the end of the trail. Maybe it’s the abundance of oxygen filling our lungs, or the green-filtered light that we clamber through, or the adrenalized knowledge that wild pigs are near.

Possibly it’s the trees themselves that recharge us. Visitors are spotted caressing their trunks or silently marveling upwards at forest giants.

Some people remove their shoes to walk the soft forest floor in bare feet. Eyes start to gleam. If four-year-old Zendo is whiny on the first hill, his tears are long forgotten halfway in.

There are landmark trees we’ve come to know like friends along the way. Seven-year-old Vita hurtled in front, pointing out the huge, fallen puriri that’s formed a cave, the potato tree, the hongi-tree and others.

At the supplejack swing she stopped to show her new friend how to climb on and bounce. Then she spontaneously kissed him; bang, smack on the lips. They both reared back screeching, furiously wiping their mouths.

“Why did you do that?” the boy-child shouted.

“I don’t know.” Vita looked around at the trees. “It just happened.” She laughed as if exalted. He joined in, flapping his arms and whooping as if his own sudden joy was too big to contain.

Scrambling from the vine, they were off, shrieking through the trees with wild jubilation while Zendo tried to keep up.

“Kiss me too,” he called, puckering his lips as he ran. He’d witnessed the electric volt of mouths colliding and wanted in on the action. But even though his sister obliged him, it wasn’t the same. The children’s high spirits lasted throughout the evening. By bedtime, however, Vita looked thoughtful.

“Mum,” she inquired the next morning, “how many husbands am I allowed to have?”

I was almost apologetic as I told her. “One’s usually plenty,” I added brightly but Vita’s brow furrowed. She’d already lined up a future groom.

“I can’t be your girlfriend,” she bluntly told our young guest at breakfast. Things deteriorated fast. By morning teatime they were no longer on speaking terms. He and Zendo smashed things with sticks instead.

“He is so stupid,” Vita told me, flouncing indoors.

Aah child, taking first steps on the pathway. Even innocent kisses can come at a price. Actions carry meanings. Handle others’ hearts as gently as feathered birds.

The kiss changed things didn’t it, I asked my daughter. She wrinkled her nose as she nodded her head. It seemed to have cost her a friendship. We talked about feelings, kindness, impulse and repercussions.

‘Remember this conversation,’ I wanted to urge her. ‘It could help prevent a lot of angst down the line.’

Lessons in reproduction begin early for country kids. With pet rabbits humping just beyond the breakfast window; our roosters straddling submissive chooks on the lawn, the determined drakes waddling lustfully in pursuit of the Pekins, and various bulls demonstrating mounting positions from fields during the weekly drive to town; our children’s interest in copulation has been both natural and inevitable. 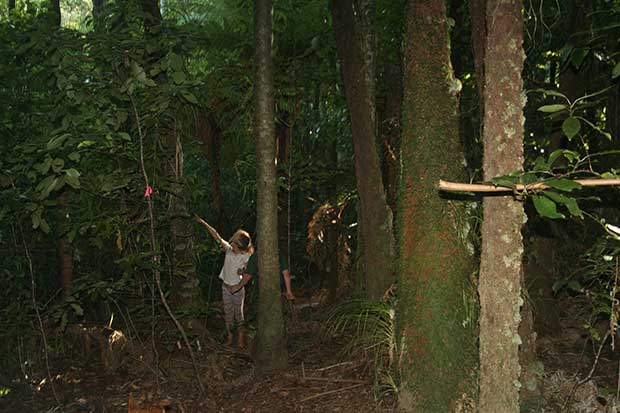 You mate to make babies. Vita and Zendo easily grasped the concept and the anatomical know-how.

There’s nothing mysterious about naked bodies to them; nudity is frequently their outfit of choice. With only forest surrounding us, there are no worries about unintended exhibitionism and it saves on the laundry, given their enthusiasm for mud.

While rear-ends and their expulsions inspire childish cackles, we figure they’ll tire of it soon enough if it’s not repressed.

“I’ve actually outgrown that word,” Vita replies loftily, proving our point. She’s moving beyond the nuts and bolts of procreation and into the intrigue of it all.

Why do visiting Helpxer couples sometimes keep caravan curtains firmly closed and insist, quite irately, on privacy? What is meant when a friend talks of an unplanned pregnancy?

How could it have been a surprise? Was she asleep when she mated? How and why do gay couples mate if they know they can’t reproduce? What did I mean, that pleasure is involved?

Sometimes I feel like I’m digging a hole for myself with my answers but I try to answer honestly albeit age-appropriately.

Vita’s innocence is still so untainted; clean of others’ shame, half-grasped knowledge and misguided expectations. She just wants to know what it’s all about. Was I so inquisitive, so early on?

All I know is I’m glad the kids bring me their questions instead of burying them beneath taboos.

If we’re open now to their curiosity, maybe they’ll find things a little easier down the path, when they reach those places where first kisses don’t end in insults and fuming frowns.