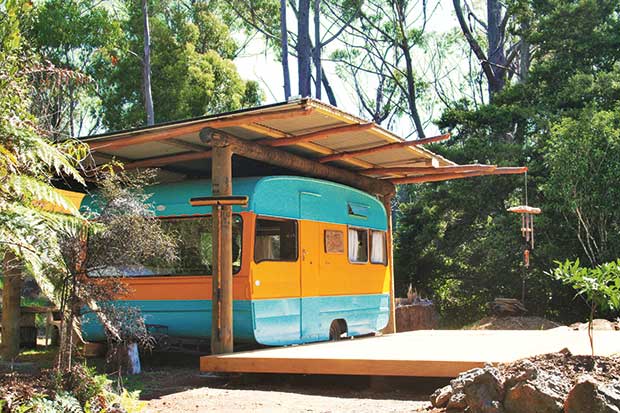 The rumpty caravan was where it all began. When dragged through the streams to our forest eight years ago, she protested so vigorously that we wincingly concluded her road-touring days were done.

Luckily the skewed bits of metal protruding from her undercarriage didn’t impact her ability to accommodate us for the next 18 months. She was our bush hut, our tiny home, and even though life got decidedly snugger when baby Vita arrived, the old girl was a good teacher on matters of minimalism.

As the rooms in our house were built, the Oxford became our guest quarters. Then, lessons on restraint fading, she morphed into my attic-on-wheels; cupboards and drawers slowly crammed with books, boxes, bags of useful items. When they overflowed, the bench seats were piled high, followed by the aisle.

“Have space, will fill,” I hummed a little guiltily as mosaic tiles, clothes for upcycling and other materials earmarked for future projects were shoved in. By the time crates of soap-making gear arrived, the caravan bed was the only space left upon which to store them.

From then on, overnight guests slept in the house while our bulging caravan greyed beneath cobwebs, dying from suffocation.

Project Rejuvenate started in the summer, in a paint shop where each family member selected their choice of a new, two-tone colour scheme for the Oxford’s exterior.

“Now you’re going to learn about democracy,” James told the children brightly. We each had two votes and while we could vote for our own colours once, the second vote had to be for another’s. 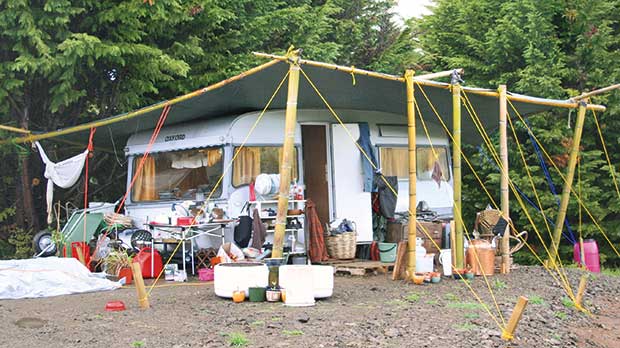 The early days before the caravan makeover.

Confirming dictatorial inclinations, seven-year-old Vita stomped from the shop in rage, echoing the sentiments of many a political loser by declaring hatred for the democratic process when her neon palette was rejected.

While James prepped a new site down the valley, my job was emptying the caravan. It was like an archaeological dig as I excavated layers of accumulated detritus. When old diaries were unearthed, I put aside my metaphorical shovel and with curiosity revisited those pioneering days when we first arrived on the land.

“Sunday. No idea what time it is. It matters less and less. Days pass. We eat, we work — on the ford, on the house site. At dusk we bathe from a bucket, splashing cups of heated stream water over ourselves as the first moreporks call across the valley.”

Here’s the truth. This summer past, it’s not just the Oxford being reclaimed. After seven years spent deeply submerged in motherhood, I feel I’m resurfacing among the debris of my life and trying to remember who else/what else I am now the all-consuming “baby years” are done.

I didn’t realize it was possible to lose parts of yourself if you focused long on others.

What I’m trying to reawaken is that vein of electric aliveness that pulses when you’re pursuing your passions and actively investigating the world. What excites me? Since when did I start to forget?

We thicken as we age, growing denser. This weight gives us presence and the power to forge our fortunes, but balance is needed. We’re meant to be dynamic. Too much solidity and we lose fluidity, setting like concrete and getting stuck in our ways.

This is the life of routine and predictability. Those are the people aging mentally as well as physically, diminishing in vivacity as neural pathways to fervour, curiosity and creativity wither until they’re just killing time before death. Life, like a caravan, is built for adventuring, for occupying with a sense of playful enthusiasm and exploration.

Amid great rattling and creaking, we towed our old girl to her new home where a freshly made deck, roof, compost toilet and califont shower awaited. Like someone drab emerging from a radical makeover, we were all a little startled by the paint job’s brightness but, hey, this caravan was built for capers. From her new site, the whole of the valley stretches before her.

We’re hoping we’ve created a space where guests too can visit and experience the magic of the forest’s breathing stillness.

Polly Greeks’ Blog: An advert for the off-grid lifestyle