Why pumpkins are the new superfood 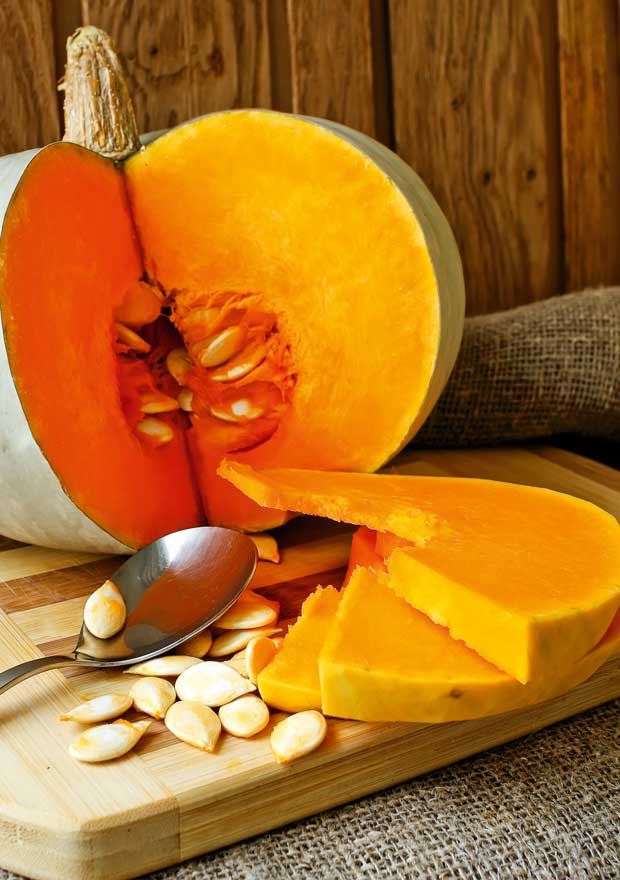 Research is proving that the simple pumpkin is packed with beneficial nutrients. Jenny Somervell tells us just how healthy pumpkins are.

What’s this?” our American friends said, poking roasted pumpkin around their plates. They didn’t recognise the key ingredient of their iconic pie in disguise as a roasted vegetable. The United States may produce 680 million kilograms of pumpkin every year but their use as a vegetable is less common.

Many Americans have little idea how to handle fresh pumpkin as it is so widely available as a tinned product. A chef friend of ours discovered this when supervising American students cutting pumpkins. She ended up sending them outside to smash pumpkins open by throwing them on concrete rather than risk any more bloody accidents in her kitchen.

The Kiwi predisposition to eating pumpkins baked, steamed, stir-fried, in casseroles, soups and stews is not a bad idea. Pumpkins have recently been attracting attention for their potential health benefits.

I’ve always thought pumpkin to be quite a filling vegetable so it was a surprise to discover that pumpkin is one of the vegetables lowest in calories – 1 cup of cooked, mashed pumpkin contains just 49 calories, yet a bowl of hearty pumpkin soup, even without lashings of sour cream, is very satisfying. That’s because it is rich in dietary fibre, somewhat masked by its creamy texture. The high-fibre content means that the carbohydrate content is absorbed slowly so it’s ideal as a weight loss food, and for diabetics because it maintains stable levels of sugar, averting those unfortunate cravings for sweeter and more calorific foods.

The fibre in pumpkin has other benefits including keeping you ‘regular’. Fibre helps the expulsion of faeces – sorry, there’s no other way to say it! A high-fibre diet facilitates the removal of toxins from the intestine, and it’s this, along with its antioxidant content, that may well reduce the risk of colon cancer. It can help animals too. Canned pumpkin has been recommended by vets as a supplement for dogs and cats with constipation and diarrhoea.

More stories you might like:
This Toyota Corolla KE26 stole a Hamilton woman's heart so she took it down the aisle

Even a cursory glance at pumpkin’s food values suggests its nutritional value is under-rated. Its bright orange/yellow colouring indicates that it is high in carotenoids, the deep orange or red-coloured fat-soluble compounds found in food plants. Two carotenoids in rich supply in pumpkins are beta-carotene and alpha-carotene, potent phyto (plant-based) nutrients. A half-cup serving of pumpkin provides more than twice the recommended daily allowance of both. This is beneficial because carotenoids are linked to promoting health and fighting diseases, including lung, colon, cervical, bladder, breast and skin cancer. They also show promise in the ability to lower heart disease.

Beta-carotene has powerful anti-oxidant activity, neutralising free radicals which negatively affect health. It has also been linked to slowing the complications of long-term diabetes caused by free radicals, including cardio-vascular heart disease. In laboratory studies it prevents the oxidation of cholesterol that builds up in blood vessels, reducing the risk of heart attack and stroke. 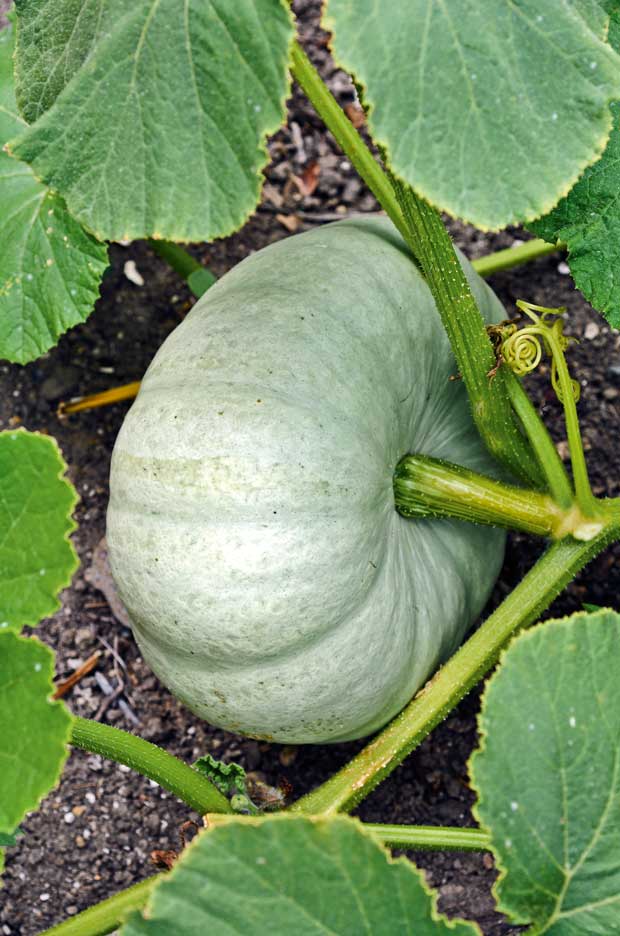 Beta-carotene is converted in the body to Vitamin A, an important nutrient for eye health. We’ve heard the old story that carrots help you see in the dark – it’s the Vitamin A that helps – and pumpkins have a similar effect. Beta-carotene in pumpkins works against free radicals in the retina of the eye, lowering the risk of developing cataracts or retina degeneration.

Pumpkin also has abundant alpha-carotene. Alpha-carotene in the body, along with other phytonutrients, has been reported to be inversely related to ageing. It is possible that the more alpha-carotene you eat, the slower your body will show signs of ageing. If only it were that easy! If you are tempted to pop a pill to gain these nutrient benefits, research suggests doing otherwise.

A number of studies show carotenoids work much less effectively isolated from their food source and can even have negative effects in tablet form. The key to their efficacy is working together synergistically with the other nutrients contained in pumpkins, including vitamin C, vitamin E, copper, iron, zinc, and the B vitamin complex.

I confess we usually chuck the seeds and inner flesh of our pumpkins into the compost bin where they very happily self-seed and romp around the vege garden. But as a poor student I remember dry roasting and snacking on them as I studied, much to the amusement of my flatmates. It turns out that pumpkin seeds are highly nutritious and have long been considered to have medicinal benefits. Traditionally they have been used as a laxative and mild diuretic, to treat intestinal worms, to help to eliminate fluid from the body, and as an anti-prostatic. Modern research confirms various beneficial health effects including anti-diabetic, anti-oxidant, anti-carcinogenic and anti-microbial potential.

It’s also been shown there’s potential for the seed extract to reduce the urination frequency in an over-active bladder. In an animal study where pumpkin seed oil was administered, inflammation-reducing effects were demonstrated comparable to the anti-inflammatory drug indomethacin. Various chemicals isolated from pumpkins have shown promising anti-diabetic effects for type 2 diabetes such as improving glucose tolerance and increasing serum insulin levels. A number of broad spectrum anti-microbial substances have also been isolated from pumpkin which may be useful in combatting increasing drug resistance issues. Most studies have been in-vitro or on animals and there is still much to be learnt about the way pumpkin’s constituents work together in the human body. Scientists emphasise that controlled clinical trials are needed to confirm the benefits for humans.

Research on the biological benefits of the phytochemicals and nutrients in pumpkin is only in its early stages, so we can expect to hear more. Pumpkin pulp has even been suggested as a good emollient for softening skin roughness and treating pimples and acne. The seed oil is used in massage for its easily-absorbed essential fatty acids which have skin-rejuvenating properties, along with its health-promoting vitamins, minerals, anti-oxidants and sterols. Apparently it also has a pleasing scent! Don’t be surprised if this nutrient-charged super-food starts turning up in cosmetics.

Studies have shown pumpkin seed oil has a blood pressure-lowering effect. Anyone on hypertensive medications (such as felodipine and captopril) should consult a health care professional.

There are no documented cases of severe poisoning, but the seeds and leaves contain oxalates which can impair calcium absorption, and tannins which are indigestible. Anyone allergic to cucumber, watermelon and zucchini should watch for signs of allergic reactions: diarrhoea, nausea, itchy skin, oral allergy syndrome (itchiness in the mouth).

The same serving provides 71% of the daily requirement of zinc, a trace element important for taste and smell and immune function, and generally lacking in New Zealand diets. The seeds are high in phosphorus and magnesium, which supports muscle relaxation, and contain good amounts of copper, molybdenum and selenium.

Pumpkin seeds are high in oils and essential fatty acids, Omega-3 and Omega-6, including alpha-linolenic acid (ALA), which may help prevent heart disease. Eighty per cent of the fats in pumpkin seeds are unsaturated. Like pumpkin flesh, they show significant free radical scavenging activity and high fibre, facilitating digestive health. The seeds contain remarkably high proportions of amino acids, including L-tryptophan, required by the body to produce ‘happy’ serotonin in the brain.

How to grow a giant pumpkin