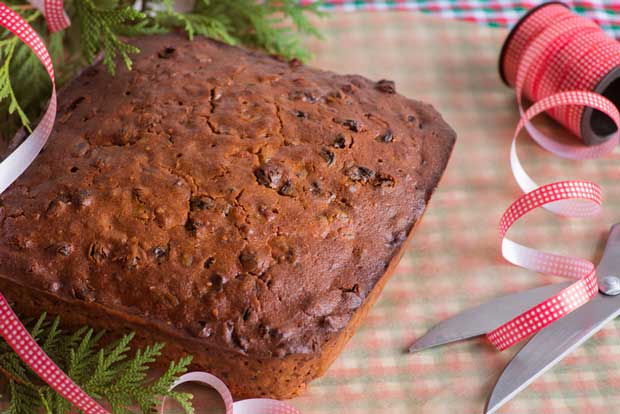 There is always an easy way and a hard way to do something, and Christmas cake is no different.

Our firstborn son seemed to favour trial and error when he was growing up, learning on his own terms which often appeared to be the hard way. The middle child was, and still is, an observer: he would watch someone do something and then have a go, taking his own sweet time and often succeeding because he had followed the steps and figured out what the end result was meant to look like. Number three is slowly learning the value of putting effort in, but often turns away from a task because it’s ‘too hard’.

I have discovered that this is also the way of things in the world of making Christmas cakes. I’ve been lucky to inherit a ‘hard way’ Christmas cake and an ‘easy way’ Christmas cake from my two mothers. One generates fond memories of my childhood, and the other is a highly creative endeavor that appeals to my sense of culinary perfection.

My mum Nancy worked very hard, appearing to me as some sort of a superwoman now that she has passed away. She juggled housework, milked cows and helped out on the farm, grew most of our veges, and held down a job as a speech therapist. Somewhere in there she found time to attend Toastmistress, go tramping, spear-head kiwi recovery programs, and entertain guests from overseas who stayed in our home as part of the SERVAS youth language scheme.

She developed her cooking repertoire around this busy schedule and churned out delicious wholesome food with apparent ease and her own unique style. When I look back at the list of her accomplishments, I am not surprised that her Christmas cake recipe is short and sweet, not too time-consuming or complicated. But don’t think she was in any way lazy or looking for shortcuts; it’s more that she wore so many hats, it was simply the most efficient way of getting the job of Christmas cake-making done.

It had to be done around one of the busiest times of the year on a dairy farm: full-time milking, feeding calves, spring garden planting, with hay-making looming around the corner. For Mum, it also meant zooming out the door to work while making sure that she didn’t have any cow manure lurking behind her ears from her morning’s labour.

In spring, she made several batches of cakes, ready to give to the mailman, the tanker driver, my husband, neighbours, workmates, and especially fellow weary trampers, who would arrive at walk’s end and discover that Mum (or possibly Dad) had carried a whole Christmas cake along as a treat. I’m going to hazard a judgment here and say that in the scheme of things, Mum’s cake is the easy way, but as I said earlier, for her it was all about fitting everything in and the great thing about her cake is that it is ready after only a week and it tastes great.

At the other end of the spectrum is my mother-in-love (we never liked the ‘law’ bit), Ethel. She was a stay-at-home mum who struggled with cooking in the initial stages of her marriage. It didn’t come naturally to her as it did to my mum. She had grown up with maids and a cook as a child, so upon marrying my husband’s father, she had a lot to learn.

But perhaps she had just a bit more time on her hands because her Christmas cake is an art form and something we only undertake every second year, gathering in all of the ingredients and making sure we have everything ready for the big day. Then it’s a serious matter of chopping and assigning different components to different bowls, a sort of cake alchemy.

After all that work, we have to wrap our cakes up and bring not so much as a speck of cake to our lips for two months. My husband has very fond memories of this cake, especially the brandy pouring part. For religious reasons, alcohol was strictly forbidden, so procuring the brandy was always a bit of a covert mission. Paul’s father Ralph would head out of town for the aforementioned spirit, and Paul remembers having a secret nip with his mum when she dosed the cakes.

His grandmother, affectionately known as Lammie, loved this cake and it always puzzled him as to why she had a bottle of brandy in the house for ‘medicinal purposes only’ when she was the most vocal and strict advocate of tee-totaling. He vividly recalls her having to be revived with brandy and demanding more once she had recovered!

We have adapted this recipe to include our home-grown dried apples and walnuts and substituted cranberries for glace cherries. Makes 2 cakes.

In one bowl, mix together:

Mix the contents of Bowl 2 and Bowl 3, then add the molasses and jam. Mix until smooth. Pour into Bowl 1 and stir everything together.

Line two 20-24cm cake tins liberally with buttered paper. Bake at 150°C for 3-3½ hours, with a small pan of water in the oven. Let cool on racks in the tins. Remove from tins and poke all over with a skewer, sprinkle with brandy, then wrap in muslin, then tinfoil.

Leave it to sit for two months and sprinkle with more brandy at regular intervals.

Soak the fruit in the juice or coffee for an hour. Pre-heat the oven to 160°C. Add the self-raising flour and cinnamon to the fruit and mix well, then tip into a lined 20-24cm tin and bake for 1 hour until a skewer comes out clean.

Pour the brandy over the cake while still just warm (about 3 hours after it comes out of the oven), wrap in greaseproof paper and store in a tin/container in a dark place for a week before eating.