In September we are celebrating New Zealand’s organic producers and sustainable businesses. The Ethisphere Institute in New York  named Kiwi firm All Good Organics one of the ‘World’s most Ethical companies in 2013 and 2014.

All Good Organics shares with us the story of one of their Ecaudorian producers, Wilson Sanchez and a recipe for delicious banana bread waffles and whipped coconut cream

Wilson Sanchez’s mountain banana farm, high up in the Ecuadorian Andes, has some of the richest, most fertile soil in the world. But it wasn’t always like that.

The previous owner had destroyed the mountain by only growing cocoa for 40 years. So when Wilson started growing bananas he made it his mission to bring the land back from a mono-culture, to create a sustainable farm and regenerate the environment. That hard work has paid off. He now grows some of the purest organic bananas in the world for the El Guabo Cooperative of Small Banana Farmers.

The farm, free from chemicals, attracts biodiversity helping to protect banana plants from pests and diseases. Wilson uses organic intercropping methods, growing a range of produce. All the weeding, organic fertilising, plant care and labour is done manually. And he allows the natural cycle of flora and fauna to break down producing nourishing nutrients in the jungle soil.
The result is a chemical free farm that produces clean, healthy, tasty bananas, every year.
“I conserve it, not only for me, but for my family and the rest of the world,” says Wilson. “It also provides us with a more dignified life, to be proud to produce bananas of high quality.”
Wilson is one of 75 organic farmers in the El Guabo cooperative. As well as meeting strict Fairtrade environmental standards, the farmers meet the highest USDA-NOP and European Union organic standards. The bananas are tested every three months to check for residues to make sure they are up to scratch and the tests consistently come back clean, zero residues. Watch him in the video below

More stories you might like:
What is a plumcot anyway? Meet the three delicious summer fruit hybrids to grow (plus easy peacharine cake) 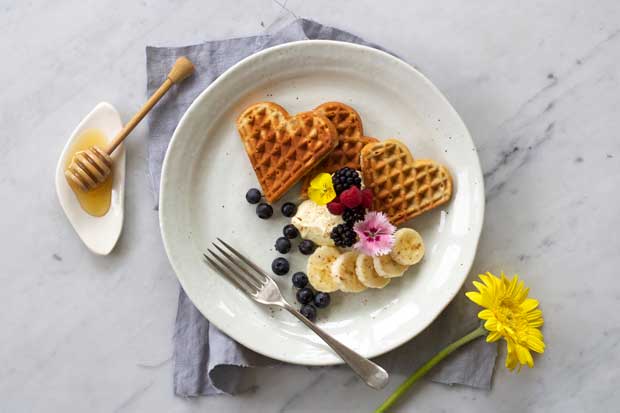 Created by Kelly Gibney for All Good Bananas

Both decadent and wholesome, this feel-good brunch dish will be an absolute crowd pleaser. If you don’t have the time to make the whipped coconut cream, some coconut yoghurt would be an excellent substitute.

Note: the whipped coconut cream must be started the night before. It’s important to buy a coconut cream without stabilisers as this will prevent the cream separating as needed.

Take coconut cream cans from the fridge carefully. Open and spoon out the solid cream layer on top (this should be roughly half the can). Place in a bowl with the vanilla extract and maple syrup. Use electric beaters to whip for 3-4 minutes until light and fluffy.

Place all waffle ingredients into a blender or food processor. Run for 1 minute until smooth. If the batter is too thick add the additional ¼ cup of almond milk.

Lightly grease the waffle iron with coconut oil. Place 4-5 heaped spoonfuls of batter into the iron and roughly spread out. Cook for 3 minutes until browned.

Place in a warm oven to store while the remaining waffles are cooked.
Serve with sliced banana and the whipped coconut cream.