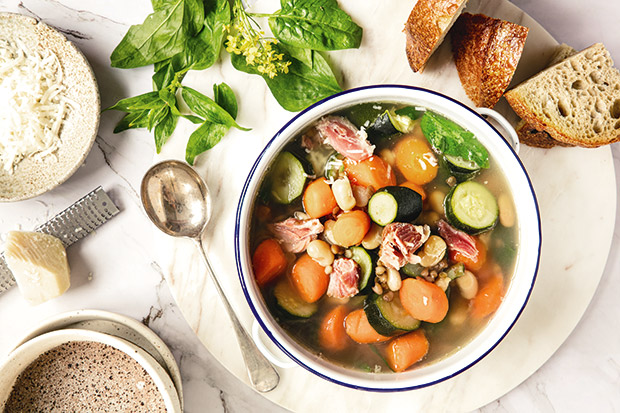 This soup is light, brothy and loaded full of nutritious vegetables.

I created this recipe as an affordable way to get flavour and vegetables into a meal. A lot of the taste comes from the smoked ham hock. I love to use these as they’re economical and, if you have the time, you can extract heaps of flavour out of them.

I once tried to speed up the recipe by putting the ham hock in a pressure cooker. However, the fat in the ham hock turned the cooking broth into a cloudy mess. This recipe is about taking your time and gently simmering the hock, keeping all the fat at the top, so you get a nice clear broth.

Put the two ham hocks in a large pot and cover with cold water. Add the stock powder and bring to the boil.

Reduce the heat, skim the scum from the top of the pot, and continue to cook for 45 minutes until the meat softens. Add the carrots, courgette, beans, and lentils to the pot, return to the boil and cook for a further 10 minutes.

Remove the ham hocks. Allow to cool a little, then shred the meat (discarding the fat and skin) into six soup bowls. Roughly chop the spinach and add to the pot. Season to taste, then ladle the soup over the meat in the bowls.

Serve with the warm or toasted sourdough and a sprinkle of Parmesan cheese.