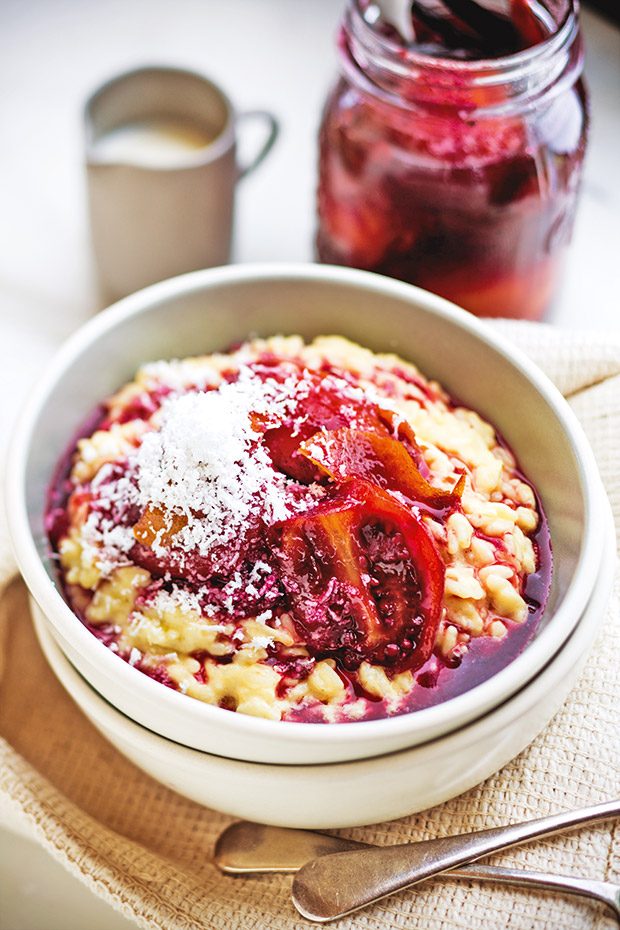 This rice pudding is anything but boring, it brings a fruity twist to a family classic.

I still remember mum’s bland, tasteless rice pudding from when I was a kid. Thirty years later, I’m eating rice pudding again, but I’ve perked it up with coconut cream and milk, so it’s rich and silky. I used poached tamarillos, but plums, strawberries, or any summer stone fruit also works well.

1. Lightly score the skin of the tamarillos. Blanch in a pot of boiling water for 20-30 seconds. Remove from the pot and peel the skin.

2. In a large pot, add the red wine, the first measure of sugar, honey, water, vanilla, star anise, and orange rind. Bring to the boil, then add the tamarillos. Return to the boil, then remove from the heat, and transfer to a large sterile jar. Set aside.

3. Warm the coconut cream and milk in a pot over a low heat. In a bowl, whisk or beat together the egg yolks and second measure of sugar until pale.

4. Melt the butter in a large pot until just bubbling, then add the rice and stir for 2 minutes over a low heat. Gradually add the coconut cream-milk mix to the rice, stirring well after each addition – it takes about 20 minutes.

When all the milk has been absorbed, test the rice for tenderness. It should be just cooked through – if it’s still a little hard, cook a little longer on a low heat. Add a little more milk if the mixture gets too thick.

5. Once the rice is cooked, fold in the egg mix. Spoon the rice pudding into serving bowls, and top with a halved tamarillo, some poaching liquid, and cream.