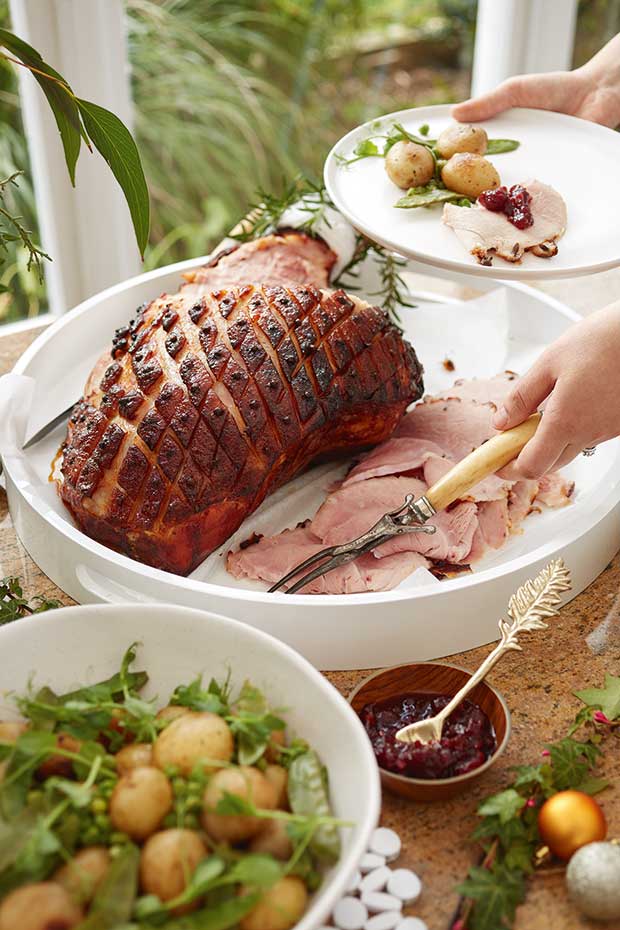 Be merry with this show-stopping ham designed to delight (and satiate) family and friends.

Heat the oven to 150°C. Line base and sides of a roasting tray with foil, then lightly grease with baking spray.

Cut diagonal lines (less than 1cm deep) in the fat at 3cm intervals and insert whole cloves into the intersecting “diamonds”. Set the ham on the prepared tray and wrap the exposed shank bone in lightly greased foil.

Stir the glaze ingredients together over low heat until dissolved. Brush generously over the ham, retaining some for basting. Bake for two hours, basting every 30 minutes until the ham is hot all the way through (60°C on a thermometer).

If the glaze starts to look very dark during cooking, loosely cover the top of the ham with lightly greased foil.

Once done, remove ham from the heat, cover loosely and rest. To serve, remove foil from shank and set ham on a large platter before carving.

Tip: Ham can be chopped or sliced and frozen for cold-weather pasta and soup dishes. The ham bone also can be frozen, then used for stock or pea and ham soup.

To carve your ham elegantly, begin at the shank end of the leg and slice ham vertically down to the ham bone using a long, sharp and sturdy knife. This way, each slice will have some glaze on it. When complete, turn ham over and continue vertical slicing.

Wrap the ham on the bone in a ham bag (or a few soft tea towels) and keep in the fridge for up to 2 to 3 weeks. For more extended storage, soak fabric in salted water, wring and then wrap.