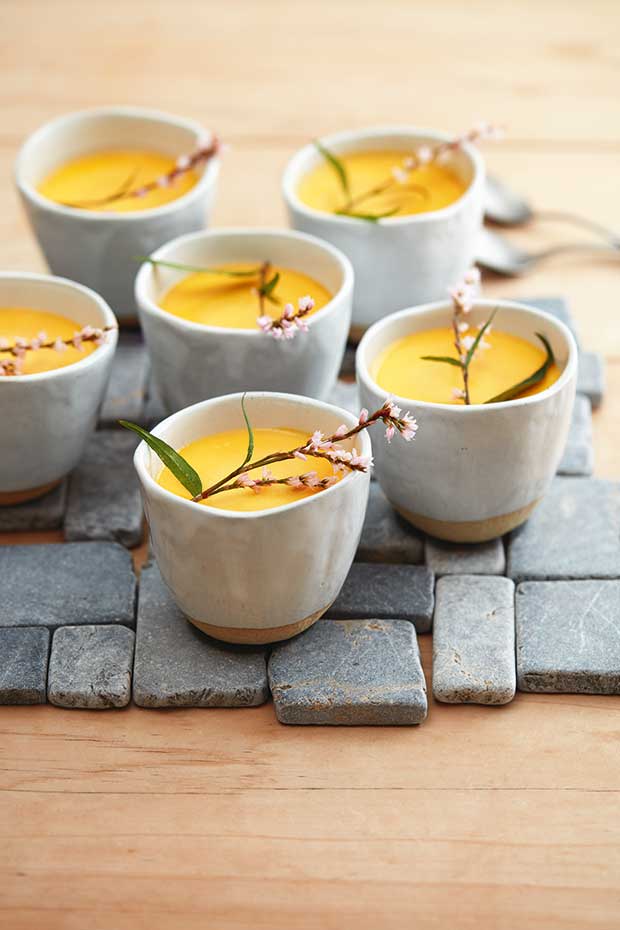 This Japanese version of the French classic is exceptionally creamy, with a generous amount of dark caramel.

Put 200g sugar and 60ml water into a small pot set over a low heat. (Be careful when using a gas hob: if the pot is smaller than the element, place it on a trivet so the walls of the pot don’t get too hot.) Don’t stir. Cook for 3 to 5 minutes, or until the sugar has dissolved.

When it has, raise the heat and boil until it begins to turn golden. Carefully swirl pan occasionally, but do not stir. When it’s a dark caramel colour, remove from the heat and plunge the pot into a sink of cold water. Leave for 2 to 3 minutes, or until bubbles cease.

Quickly pour into 6 x 175ml ovenproof moulds, swirling the caramel around the sides.

Bring the cream and milk to a simmer over medium heat.

Whisk the eggs, yolks, vanilla and remaining 100g sugar until light and fluffy. Gradually add the hot (but not boiling) cream and milk, stirring continually with a large spoon (not creating froth).

Pour evenly into the caramel-lined moulds. Place the moulds into a large, deep, baking tray and cover the top of each one with foil. Pour hot (not boiling) water into the pan to come halfway up the moulds.

Bake for 1¼ hours or until custard is only just set (it should still wobble). Remove from the tray. Cool and refrigerate, preferably overnight.

Do not attempt to unmould it.