Some time ago, a sort-of neighbour informed James and me that we were living out the happiest days of our lives. He was referring specifically to the fact that we resided in a caravan. He, too, had once arrived with his partner on land that featured nothing but bush. Home for them was a canvas tent they’d occupied for four years with their growing babies while he built a road and a house. “Magical times,” he said, waxing lyrical about nature, simplicity and freedom. He was just saying how he’d return to those days if he could when his wife gave an incredulous snort. “You’d be doing it on your own,” she snapped. 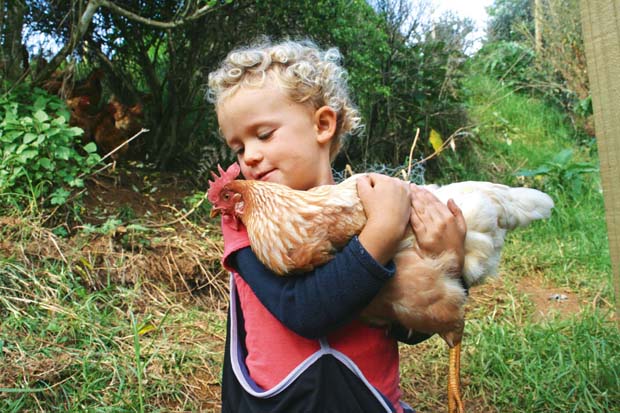 It’s a conversation that’s stayed with me over the years as we’ve slowly upgraded our living quarters. Straining excitedly towards a future where the washing machine fills itself automatically, where we bathe indoors and where there’ll be multiple rooms in which young children can be dispersed on wet days, I’ve wondered if I, too, will ever look back at the present and yearn.
Given the glee with which James and I recently toasted the end of an era, it seems unlikely. “We have a kitchen door!!!!!” I texted to various loved ones as we stood in our first-ever enclosed kitchen. While the number of exclamation marks may seem excessive to those who’ve never lacked this hinged barricade, people familiar with our outdoor camp galley were quick to send congratulations.
It’s not that there haven’t been good aspects to cooking outside for the past four and a half years, but we’re delighted to be shutting up shop on the fossicking possums, invading rodents, defecating sparrows, kamikaze moths and our thieving dog who liked to station himself beneath the chopping board. Moving indoors means we no longer need to psyche ourselves up in order to make dinner during a storm. Cooking in raincoats and gumboots is over. Mud and dust have ceased to be part of the decor, and we’ve stopped adding so rapidly to the mountain of broken plates, teapots, mugs and other crockery we’ve amassed over the years, casualties to the gales that have smashed through our outside scullery.

With four proper walls and our new door closed, the rodent resort we’ve inadvertently run every winter is closed for business and I can finally stop being so cautious about putting on oven mitts and disturbing the bush rats that liked to curl up inside. Instead, as Antarctic winds hurl themselves at our fastened windows and rats scrape their teeth fruitlessly against impenetrable mud-bricks, James and I can be heard laughing invincibly from within.
And yet I was surprised to feel a certain pang as I watched the most recent lot of house walls go up. However much shelter they provide, they also bring with them a sense of confinement and separation. Moving the kitchen indoors has reduced the surrounding forest to framed vistas from windows and suddenly we’ve become a bit more distanced from that outdoor world. Perhaps that’s why we’re not actually dismantling the camp kitchen. Sunsets, birdsong and warm, wafting breezes have become vital seasonal ingredients and, come next summer, we fully intend to be back out there, stirring them into our cooking.
With the arrival of a flock of chickens, another new culinary era has also begun. We inherited the birds from a neighbour whose son had abruptly abandoned his free-range business. “Take as many as you want,” she said of the 70 or so hens roaming in the bush. Following a few undignified evenings spent lunging wildly through the flax we decided to stop with just 12 birds, much to three-year old Vita’s disappointment. Since settling into their new digs, two of the gang have come out as roosters, and pretty Clementine got roasted as retribution for her Houdini antics, but the other girls seem taken with their nesting boxes, sending us riffling through recipes as we struggle to keep up with their enthusiastic daily production.

In the next post, Polly and James receive some unusual nocturnal visits.