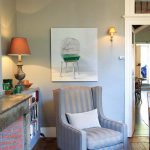 A painting by Emily Wolfe. 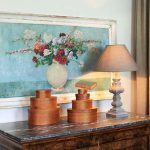 Anna has found many things at the markets including this painting and the chest of drawers below. 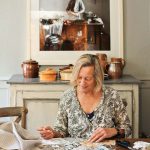 Anna in the kitchen starting a patchwork for her niece. 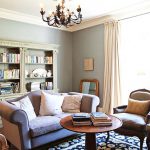 The living room homes Anna’s best find to date, a biblioteque (bookcase) from an antique shop in Lalinde. 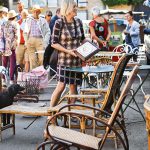 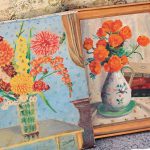 Paintings at the Bretenoux market, Anna couldn’t resist purchasing the naive still life on the left. 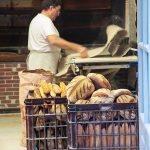 Artisan bread, which, as Anna found, is very important to French cuisine. 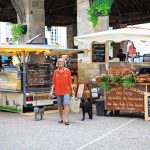 Shopping with Harry and his friend Toots. 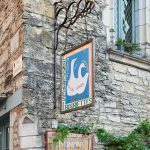 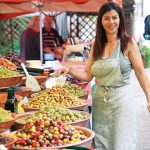 Olives from the south of France at Martel’s Saturday produce market. 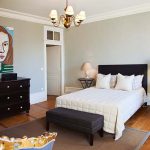 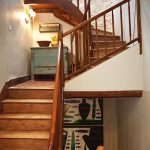 Paintings by Gavin Chilcott and Desmond Helmore hang in the stairwell. 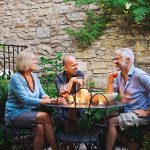 Dinner on the terrace with Dominique and Harry, friends from the Versailles. 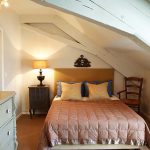 One of the attic bedrooms. 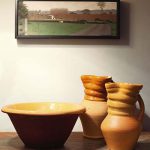 Former Auckland art dealer Anna Bibby ignored the voices that told her she was bonkers and upped and moved to small-town France for a life tres tranquille. 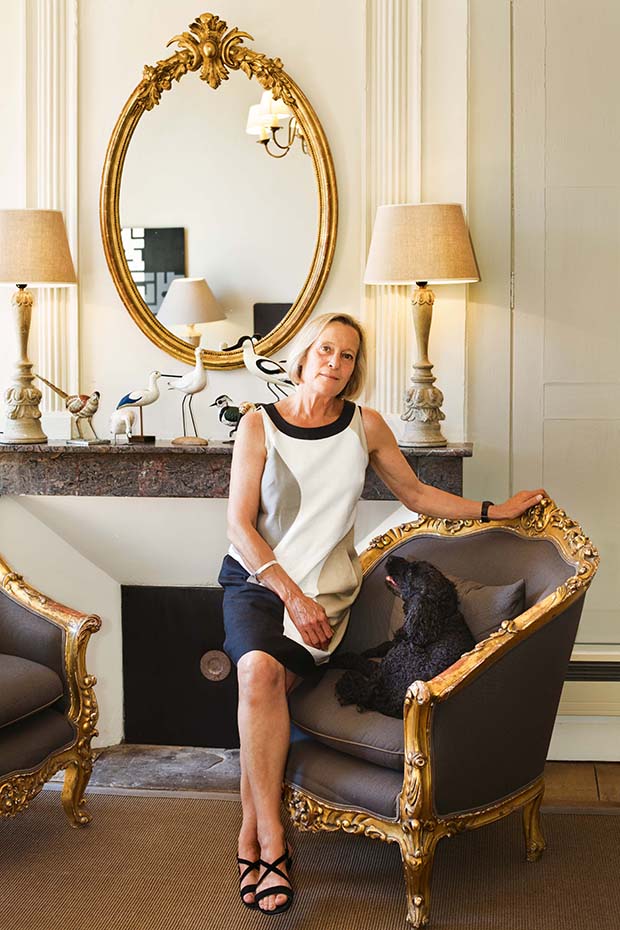 Anna at home with dog Harry.

Anna Bibby hadn’t intended to move to France. But then she had one of those birthdays that end with a zero. “It was an anniversary that reminds you that life is finite,” she says. So she joined a friend for a month-long holiday in Florensac, a tiny French village a stone’s throw away from the Mediterranean. No thought was given to her gallery, no emails were sent, and no phone calls were made. It was a lovely time, she says.

But the happy month in France had the unintended consequence of throwing her into turmoil. “Despite my life already being busy and fulfilling – running an art gallery, living in a beautiful apartment, having many friends – I couldn’t seem to shake the feeling there was something else I could be doing, somewhere else I should be…” 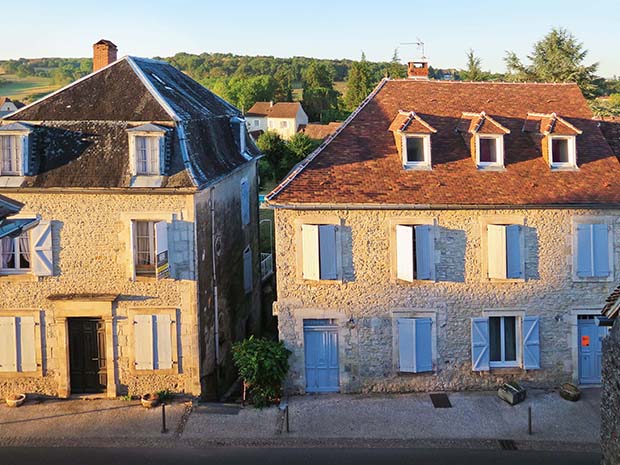 The village of Martel

So in 2009, trying to ignore the nagging little voice that was telling her she was crazy, Anna set about searching for a dream home en France. She wanted a property in or on the outskirts of a village, a stone house with shutters, imposing rooms with the original features still intact. And, despite the cheaper prices of country houses, they were not an option – she wanted to be part of a community, and the isolation and loneliness of remote country life held no appeal.

After initially looking along the southern coast, she followed the suggestion of Chrystelle Baran (of Baran de Bordeaux Antiques in Auckland) to visit the Dordogne. Although never having heard of the region, which she later discovered is very popular with Anglo-Saxon holidaymakers, she loved it. In France’s south west, the area, with its rolling countryside, hectares of walnut trees, quaint medieval villages and 1500 chateaux often perched precariously above the Dordogne River, was magnificent.

Just days before she was due to fly back to Auckland, her real estate agent took her on an early evening detour a few kilometers outside her target zone to the valley of the Dordogne. This region in the northern Lot, famous for its foie gras, canard, truffles and walnuts took Anna’s breath away. “As soon as the agent parked the car in Martel I knew that this was it, this was the village I wanted to live in.” 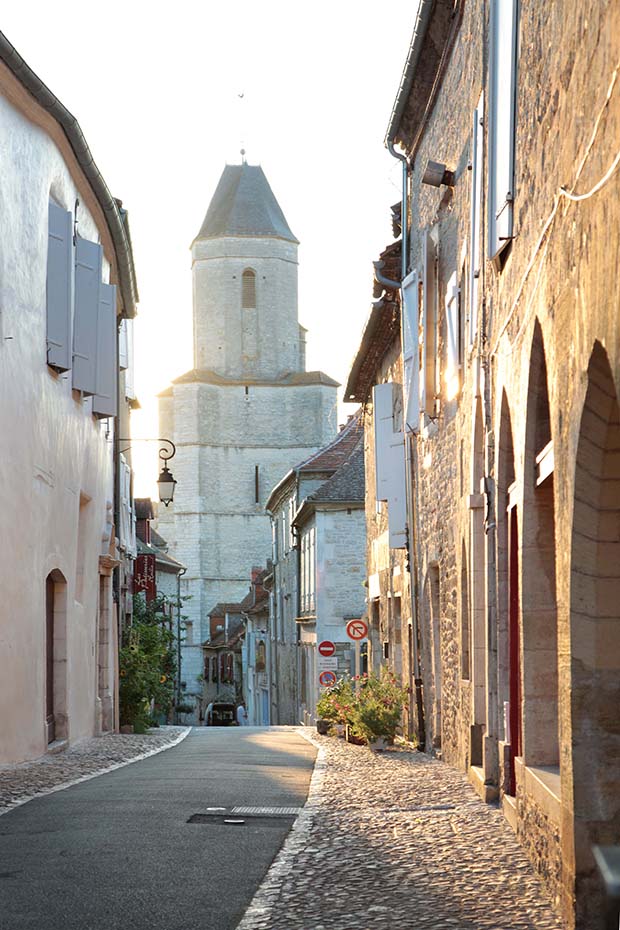 The village of Martel

Ancient stone houses glowed golden in the late autumn sunlight. As she wandered through the labyrinth of tiny cobbled streets with arched wooden doors and high stone walls shielding private gardens, she felt her certainty intensify. Her list of prerequisites for a house flew out the window – she didn’t care where she lived as long as it was in this medieval village. On a whim she purchased one of the only three houses for sale. That it was two-storied and in desperate need of renovation with apricot bathrooms, lime green shag-pile carpet, orange wallpaper and “architectural follies” did not deter her.

She departed for New Zealand leaving renovation instructions and six months later returned. Walls had tumbled to open up better space, and the dark kitchen, with its single dangling light bulb, ancient bench and sink with neither stove nor refrigerator, absorbed three other rooms and passages. Using her trained eye, Anna set about harmonizing the new whole. The kitchen needed to be installed before the French summer holidays commenced and tradespeople vanished for eight weeks. The floor was now a medley of 13th-century stone slabs 30-centimetres deep, slightly more recent terracotta tiles and flashy 1960s ceramic tiles. The tiles were lifted and, alarmingly, revealed earth below so a concrete base had to be laid before her new stone floor went down. The ancient stones were reworked into the courtyard.

During the hot summer months, with temperatures rising as high as 40 degrees Celsius, Anna stood on scaffolding painting the old ceilings and walls. Above her she could hear a workman crashing around demolishing the second floor with its apricot bathroom and, for some unfathomable reason, completely removing the electrical system. And then there were the infamous French plumbers; surely they had to be the strangest in the world? “The plumber’s dashing good looks definitely couldn’t compensate for his lack of ability,” she says.

With disastrous results, the waste from the kitchen sink was being discharged into the washing machine. Then, from a leak in the newly installed upstairs bathroom, water dribbled down the kitchen wall, damaging the plaster and causing mushrooms to grow on the ceiling. “I know things like this can happen when you’re renovating. But when you haven’t quite mastered the language, it is a barrier that can hit you hard.” 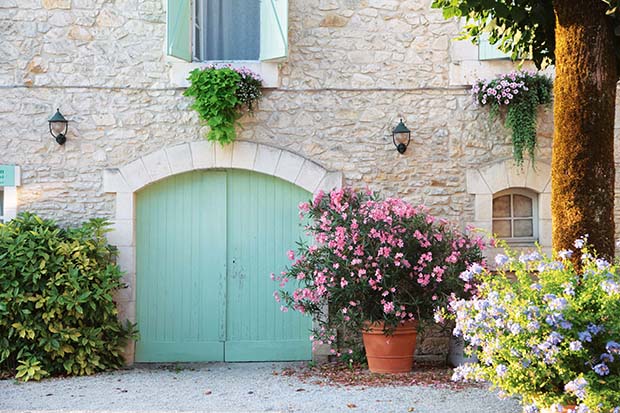 The first anniversary of her new life was not the happy occasion she’d anticipated. She recalls opening a bottle of rapidly warming champagne – during the previous night the power had mysteriously turned itself off, and she was still waiting for the reluctant electrician to reappear. Alone in a foreign land under the shade of the wisteria, sipping lukewarm champagne, tears suddenly slipped down her face. “It was that oh-my god moment,” she says. “What had I done? Surely I was crazy moving to a remote village in France where I didn’t know a soul, didn’t speak the language, and where the cultural differences were a minefield?” For the first time in her life, she felt utterly alone.

But Anna Bibby is not one to give up easily. She battled on. Gradually the house was transformed into a home. Neighbours started to drop by, mostly out of curiosity. But after two years of hard work Anna was ready to open the doors and welcome them all in – those who had left food and fresh vegetables on her window sill, helped out with translation problems and official documents and tolerated her language skills.

Now the soft grey walls in Anna’s house provide the backdrop for the many New Zealand artworks Anna has brought to France. Linens, purchased on shopping trips to the Marché Saint Pierre in Paris, have been made into curtains whizzed up on her old Singer sewing machine. Her patchwork quilts are greatly admired.

And, after sampling her cooking, her neighbours Mathilde and Natalie are also committed to teaching Anna all things French, commencing with dishes using the local ingredients and the vast variety of mushrooms foraged in the forests by their husbands. Taking over her kitchen, they have taught her how to make jam, apple tarts and – in spring – peppery and delicious dandelion salads. They have also explained cultural differences, how to set a table the French way and the sacrosanct obligation to offer bread no matter what is being served.

More stories you might like:
Thinking outside the box in a 60sqm container house (in cherry orchard) 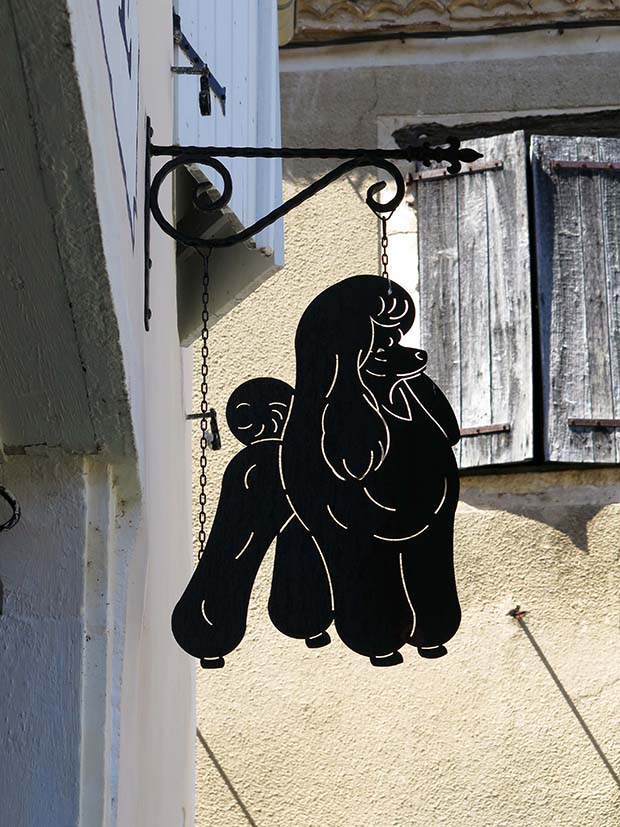 One day while shopping at the Saturday produce market Anna overheard Natalie gossiping to a villager – it was a eureka moment when she realized she could understand what they were saying. But they were also talking about her.

“Mais oui, the Neo Zelandaise, her French is terrible and that accent, oui, it is frightful, but she’s such a wonderful cook.” A backhanded compliment of sorts but one that shows you may get there en fin.

Similarly on an otherwise unremarkable afternoon, there was a knock on her door and there stood Monsieur DuPont, the retired gendarme. Although she was used to his stern appearance, on this occasion his expression was more formidable than usual.

“He had come to inform me that I could now address him in the tu form of ‘you’ instead of the formal vous used for strangers and social superiors. Having so far muddled rather than mastered the associated tu and vous verbs, I reminded him that I already frequently addressed him in the tu form. With a shrug and a small smile he nodded and said, ‘Yes but now you are allowed to.’ And with that he shook my hand and left.” 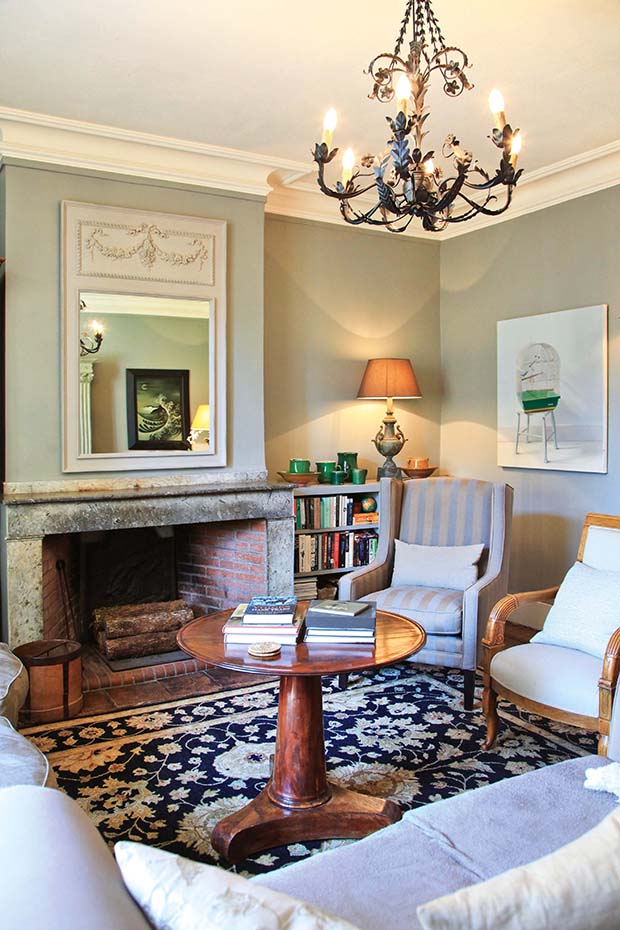 The living room features a painting by artist Emily Wolfe

Life in the French countryside is never dull. Summer is the season of fetes where, in the covered village square, tourists and villagers dance until the early hours to live music, and residents hold street dinners on trestle tables and enjoy blocking traffic for hours. Each weekend throughout France there are brocante markets, where antiques and vintage objects are sold in the open air. In tree-shaded parks or on ancient village streets, stalls sell anything from starched linen tea towels and embroidered sheets to armoires and chandeliers.

In autumn the villagers heave a sigh of relief as the summer residents and tourists depart. It’s time for “real” country life to return; digging up the potatoes, gathering the walnuts, picking the famous cèpes and girolles mushrooms, pruning the trees and preparing for the long and often very cold winter. Large trucks block the tiny streets as they discharge winter fuels. Tractors, their trailers laden precariously with firewood, totter along as they head towards Martel at a snail’s pace.
During this welcomed hibernation, tucked up on the couch under a rug with Harry, her dog, Anna enjoys reading a good book or sipping aperitifs with village friends in front of a roaring fire – all the time knowing that she is in the right place waiting for spring.