Kauri, puriri, totara and rimu – these are the leafy sentinals standing guard over the Greeks family. And, in return, the family is taking just as much care of them

Sometimes on summer nights, when the children are sleeping at last, the moonlit-blue silence is so boomingly electric James and I can hardly bear to stay indoors. Up on the skyline, the silhouettes of ancient trees soundlessly puncture the stillness like giant shaggy exclamation marks, while the forested hills are blanketed in hushed shadow. Although nothing moves, the land is not holding its breath, but breathing gently and deeply, pulling us into its slowness.
Another year may be clicking over but on these luminous nights, calendar weeks and months are nothing more than shedding paper leaves. Time is the slow, unhurried spread of tree rings deep within the trunks of the forest giants. 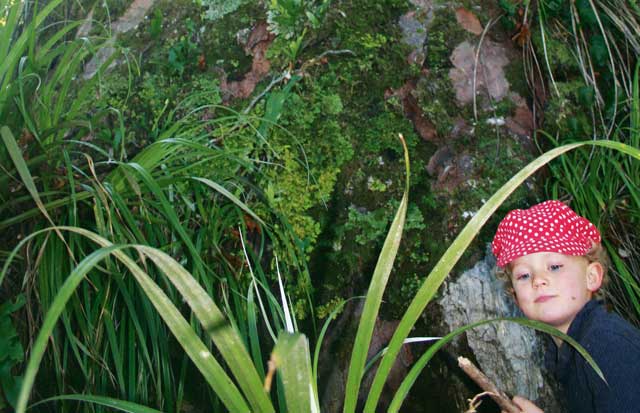 More than a century ago, loggers came through our valley in their quest for wood, pretty much clear-felling their way through a kingdom of kauri, puriri, totara and rimu trees. And then, for some reason, they reached the ridge and ceased to hack at the flora.
Whether they stopped for aesthetic reasons or because of bad weather or some other hindrance, we’ll never know, but thanks to their inaction, our valley feels guarded by about a dozen truly colossal trees, each estimated to be more than 1000 years old. Most stand along the ridge line but there are others that we’ve discovered, as vast as rooted wooden whales, hidden in deep gullies and rising from the leaf litter. Beneath the clacking summer roar of cicadas, there is a silence to these trees that is commanding; unbelievably slow and primordial rhythms where whole years pass in a heartbeat. They speak of patience, dignity and endurance, anchored as they are, to a reality over which scurrying humans seem barely able to penetrate.
Following the clear-felling, a half-hearted attempt was made to farm at least some of our land but during the succeeding century, the forest has been on the move, gradually sidling down from the ridge and out from the gullies to reclaim what we feel it rightfully owns.

We have watched it at work in the five years we’ve been here. Re-carpeting the last remaining hillside of kikuyu grass across the stream, it sends out the ponga trees first. One day there is nothing and then, quite suddenly, another tree-fern has emerged – a squat umbrella rising out of the matted tangle to shelter, in time, self-seeded totara saplings.
On our side of the creek, the forest comes right down to the house site and forms a dense wall. It’s neither forbidding nor
dark nor gloomy. Instead, I love being up against this edge of wilderness, knowing it extends back for kilometres, over hillsides and into reserve.
It is James and my dream that this piece of land shall remain in our family’s care long after we’ve dissolved into the earth. This has made our planting of trees feel even more meaningful. The walnut may not be prolific in our lifetime but, we tell Vita and Zen, your children might feast on the nuts.
Of the 150 or so trees we’ve planted so far, the ones that have excited us most are the 40 kauri seedlings. James has created a walkway with them, down past the chicken run and far orchard, dropping to the stream and looping back up through the manuka grove. Establishing these and other natives has become a passion. It is a gesture of belief in our land’s ability to remain a nature sanctuary. It is a vision of kauri forest returning to this location. It may be consuming all our spare money but the placing of every tree in the earth feels like the sowing of a true legacy.
Hearteningly, visitors to our land are beginning to catch the tree-planting buzz, setting off around the property armed with spades and seedlings to contribute their own small part of a gift to tomorrow.