Striking a chord: This musical couple grew their ukulele festival into the largest in New Zealand Hugh and Fi McCafferty, otherwise known as The Ukulele People.

A musical couple in Geraldine fosters joy — and a nationwide community — with the little lute that could.

With a mere four strings, a ukulele has neither the volume nor street cred of its larger, rock ‘n’ roll counterpart. But put 20 ukulele players in a room, and this small-but-mighty instrument becomes a musical powerhouse.

“The ukulele has a quiet voice,” says Geraldine local Hugh McCafferty. “When you have strumming, solos and melody, a group of 20 players quickly becomes what we call an ‘ukestra’, or a ukulele orchestra.”

Hugh and wife Fi, founders of the annual Geraldine Ukefest, have been teaching, busking and leading ukulele strum-alongs for more than a decade. Rarely do they perform solo, says Fi. “The ukulele is considered a participatory sport for many people. It’s a way for musicians of any skill level to make music together. With so much noise, it doesn’t matter how you play — you just have fun,” she says.

The musical duo (known as The Ukulele People) first picked up the uke in 2009. The guitar-like instrument was easy-ish to learn and, with its dainty sound, encouraged Fi and Hugh to play together rather than alone. “And you can carry it around in your handbag,” adds Fi. They were instantly hooked.

So how did this couple, in a town with fewer than 2500 residents, come to host the nation’s largest ukulele festival? They wanted to give their local ukulele group (formed from their beginner’s ukulele course) an event with an audience. “There’s not much point to learning an instrument unless you have somewhere to perform it,” says Fi. “So we told our students we’d eventually get them up on stage.” The musical duo first picked up the uke in 2009.

Fi kept her promise. In 2012, dozens of budding ukulele players jammed their hearts out at the variety concert she and Hugh organized as a church fundraiser. The following year Fi, a graphic designer and direct marketer by trade, created a poster that advertised a mass strum-along, an open mic night and a ukulele church service. Geraldine Ukefest was born.

The winter festival has grown in duration and popularity in the past seven years, with nearly 400 ukulele enthusiasts at the last four-day gathering in 2019 (2020’s event was cancelled due to the nationwide lockdown). “Ukulele is great for older people who may have missed out on learning an instrument in the past,” says Hugh. We’ve seen a significant number of older folk who really love to express themselves musically.”

Hugh and Fi, who also run community newspaper The Geraldine News, marvel at participants’ enthusiasm. Contrary to other music festivals, the headline acts at the Geraldine Ukefest have less sway in ticket sales. “The biggest pull is for everyone to see each other. Visitors come from all around New Zealand to just hang out and strum songs together,” says Fi. 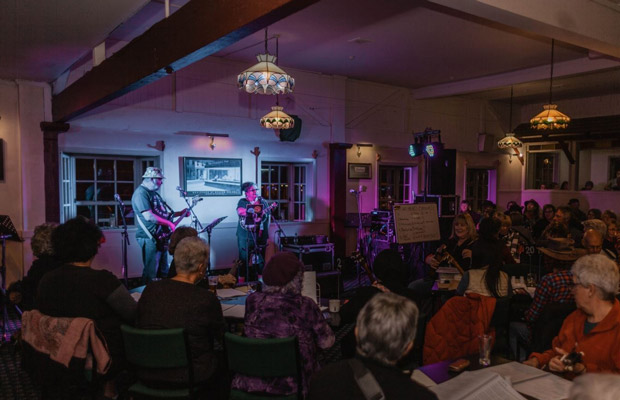 A few years into running the festival, Fi started a Facebook group to encourage enthusiasts around the country to connect. The New Zealand Ukulele Network, now with nearly 3000 members, is a thriving ecosystem of invites, video concerts and virtual meet-and-greets.

It is a joyous moment when Hugh and Fi, surrounded by hundreds of ukuleleists, can witness the fruits of their labour. On the penultimate day of the festival, the couple leads a community strum-along (fittingly called “The Big Strum”) where anyone — even non-musicians — can join in by strumming or singing.

“We love that it’s a chance for anybody to get their ukulele out and have a go,” says Fi.

Buy an instrument, not a toy. “We’ve had people come to us proudly bearing something that is not an instrument at all,” says Hugh. “Makala, an entry-level brand, offers an instrument you can actually play for as little as $60 to $70.”

Make some noise. “Fake it until you make it. By just learning the C chord you can strum Frère Jacques. Playing in a group is helpful because the ukulele sounds a bit thin when played solo.”

Practise makes perfect. “With any instrument, you’ll get early success and reach a plateau. Persevere through the plateau by practising for 10 minutes every day.”

This year’s Geraldine Ukefest is from 22 to 25 July. Learn more at geraldineukefest.co.nz