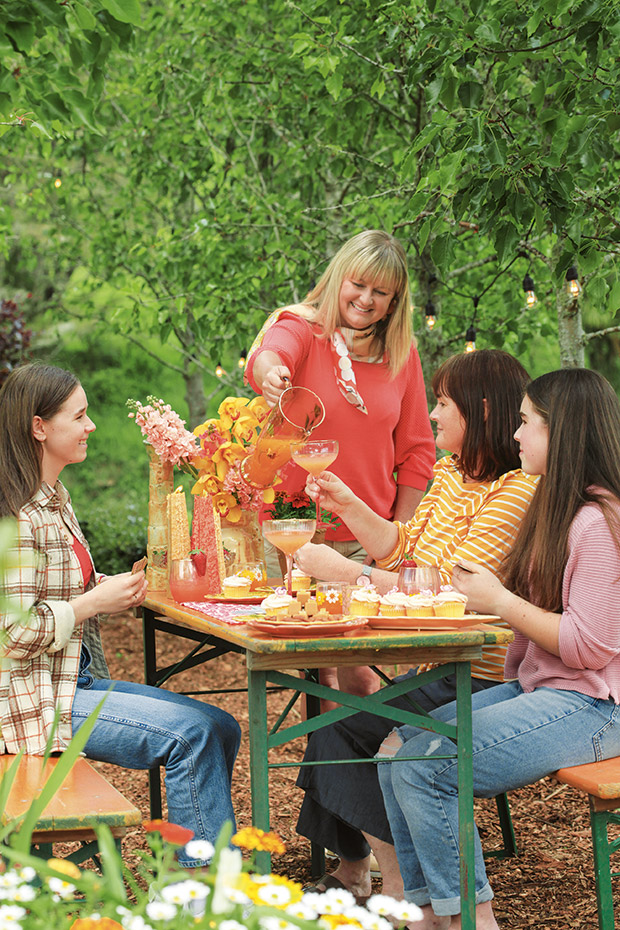 Lynda pours her sister Brenda a glass of tropical punch. She’s a fan of mixing new and old glassware — her pink cocktail glasses were Kmart specials, while the antique green-stemmed sherry glasses were a speaker’s gift from the Herald Island Garden Club. “They knew I love going op-shopping, and I adore anything green, so they bought them for me.”

Summer is a time for garden parties and picnics. Let the games begin.

So long, farewell, auf wiedersehen, goodbye… With apologies to Richard Rodgers and Oscar Hammerstein, when 2021 takes its leave, will anyone heave a sigh or bother to sing Auld Lang Syne? Not I.

Nau mai, haere mai, summer! Whatever trick the pandemic still holds up its sleeve, I’m game for it. I’m jabbed and jolly overdue for a few gregarious outdoor gatherings, at home or away. Never have I been so pleased with the renewed prospect of nattering on about nothing with a gaggle of gal pals over cocktails and cupcakes while slapping at mozzies on reconnaissance missions.

Bring it on, I say, to a cappella of cicadas and crickets, the aromatherapy of freshly mown lawns and mānuka woodsmoke, the sizzle of snags on the barbie and ice cubes clinking in chilled glasses.

In spring, Covid-19 held all the aces. But it’s a new season now and, in my family at least, summer is synonymous with carefree days at the beach followed by convivial nights trumping each other at card games. When I was a child, our annual off-farm holiday consisted of pitching a tent for 10 laidback days at the Hot Water Beach camping ground. Our city cousins rented a nearby bach and, when the sun went down and our canvas abode grew dark, we’d walk over to their holiday home to thrash each, other playing cards until the wee small hours.

As we grew up, my sister Brenda and I graduated from Snap and Go Fish to Last Card, Strip Jack Naked and Cheat, then Gin Rummy, 9-5-3 and ultimately, in a coming of age, we were deemed mature enough to play 500 against our parents. They showed us no mercy, then or now.

(Fun facts about 500: it was invented and copyrighted by the US Playing Card Company in 1904 and, despite later being usurped by Bridge in the popularity stakes, it remains the national card game of Australia and New Zealand, according to Encyclopaedia Britannica.)

Last summer, when my 18-year-old niece Jaime asked if she and her new boyfriend Charlie could come to stay at our Tairua bach, my first question, naturally, was, “Can he play 500?” (You can’t be a card-carrying member of the Hallinan clan without knowing your left bower from your right.) 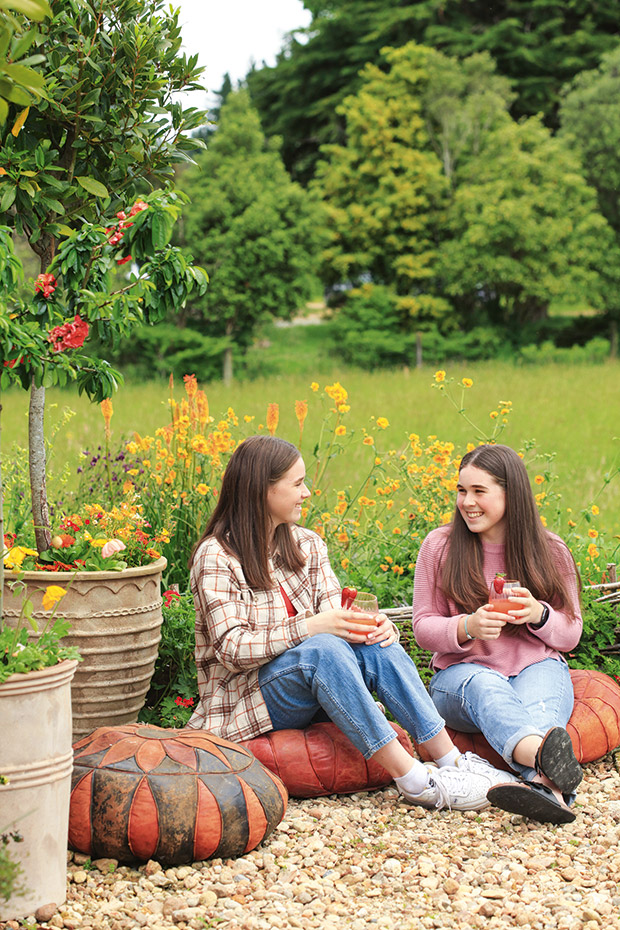 Although our whānau occasionally flirted with Cribbage and Canasta, we never once played Euchre, the card game of choice in my husband Jason’s family. Jason hadn’t played a hand of 500 until we met, just as my mother had never played it before she married my father. (Her family preferred Scrabble.)

The poor patsies. They had no idea what they were marrying into, for every summer evening after the dishes are done (and sometimes before), we shuffle the deck at our bach dining table — the same Formica dining table my grandparents played 500 at — and recklessly outbid each other until someone quits in a snit, or the bottle of Stone’s Original Green Ginger Wine runs dry. 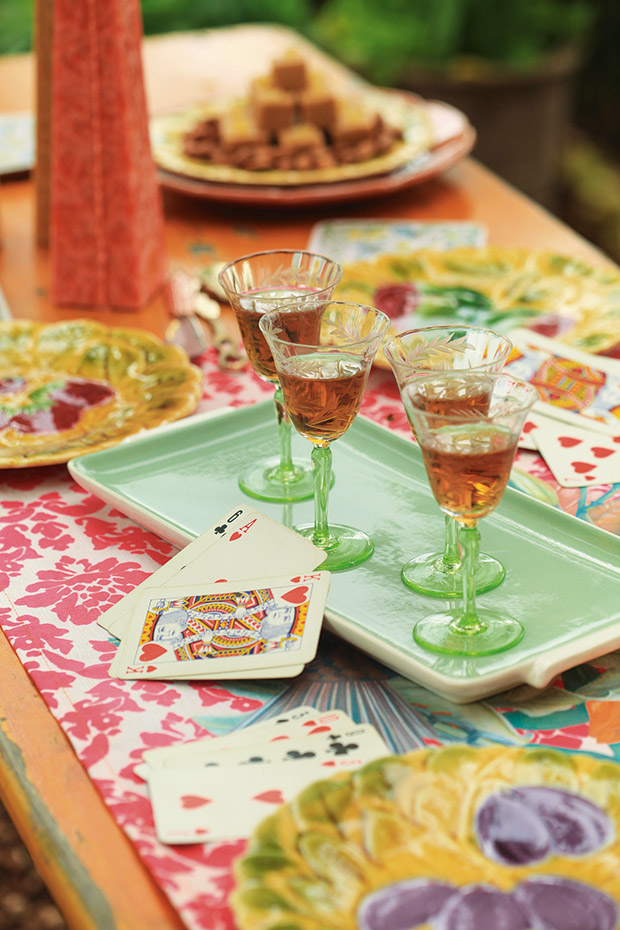 We knock it back in shots, on the rocks, or in a modified moscow mule with ginger beer and muddled mint. Sometimes I raise the stakes and show up clutching a bottle of Cavalier Ginger Wine (a local vegan-friendly version distilled by Allan Scott’s family in Marlborough), but as Stone’s is always in stock at the Tairua Four Square, it’s what we tend to quaff.

This hale fermentation of wine grapes and antioxidant-rich ginger was invented in London in 1740. In the 1830s, during the cholera epidemic, it was marketed as a medicinal tonic, a digestive aid and “an effective aphrodisiac”.

Sadly, I can’t concur that swigging green ginger wine — or any other intoxicating elixir — promotes frisky feelings when playing cards. Those Hot Water Beach holidays of my youth frequently descended from friendly rivalry into accusations of cheating, table talk and name-calling. One summer, no cards were played because the previous summer’s perceived slights were still festering like the oyster cuts our bare feet collected clambering over the rocks at low tide. Lynda, her teenage nieces Jaime (left) and Grace McLean (right), and their mum (and Lynda’s sister) Brenda play Gin Rummy at dusk under an avenue of ornamental pear trees. “Pyrus calleryana ‘Aristocrat’ is such a gorgeous upright tree for spring blossoms, summer shade and autumn colour,” says Lynda. The vintage oak library trolley, now repurposed as a portable drinks cabinet with a collection of crystal decanters, was an impulse purchase from Thames Antiques.

My husband tells me that playing cards brings out my worst qualities. Pfft. Sledging is a perfectly acceptable strategy, especially when you’re losing because your partner’s playing like a preposterous numpty. And cheating is only frowned upon if you’re caught. (My late Uncle John, audaciously, once played the Joker twice and got away with it.)

In the long months of lockdown, as we waited to find out when, how or if we’d ever be allowed to cross Auckland’s border and get back to the beach, I invited my sister and her daughters to join my bubble for a cards-and-cocktails “picnic” in my garden. I served gin rummy punch and shirley temple mocktails garnished with fresh strawberries (shirley traditionally sports a maraschino cherry, but they were a no-show in my click-and-collect supermarket order). 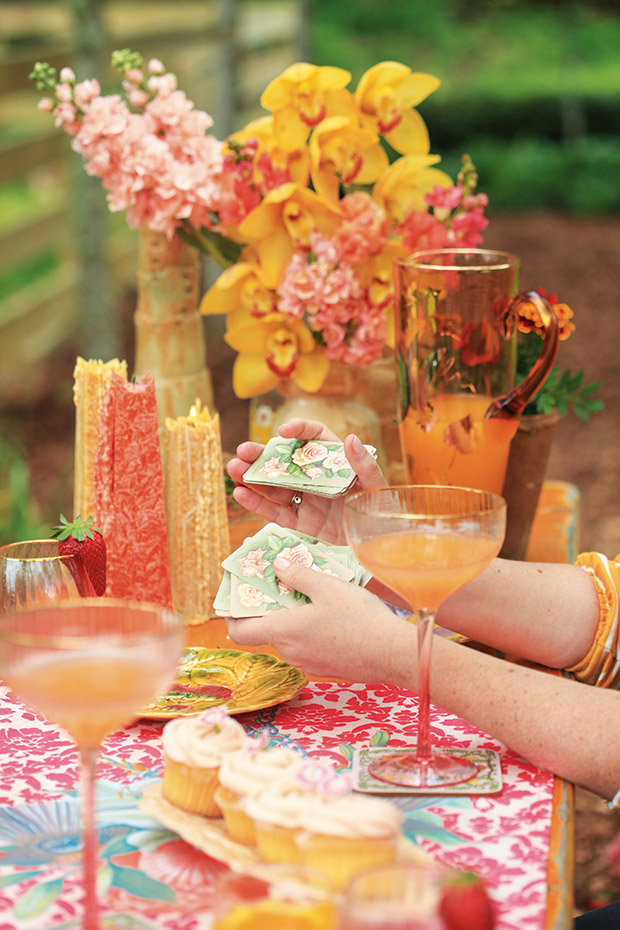 None of us was keeping score. Because when we play cards, it’s never about the game. It’s about getting together to uphold a tradition and reminisce about summers past. It’s about camaraderie and chocolate fudge, potato chips and onion soup dip, tipples and titters.
It’s about making the most of the hand we’ve been dealt.

Remember Valerie Bertinelli, the teenage star of 1970s American sitcom One Day at a Time? These days, she’s better known as the host of Valerie’s Home Cooking Food TV and, a couple of years ago, she served up a games night episode that included a round of gin rummy cocktails. Inspired by her recipe, I make my own pun-worthy Gin Rummy punch. In a large jug half-filled with ice, combine 2 cups orange juice, a 330ml can of lemonade, 1 cup golden rum (I use Helmsman Spiced Rum), ½ cup gin, ½ cup green ginger wine, ¼ cup grenadine cocktail syrup, and the juice of 1 large lemon. Serve in tall glasses filled with ice.