“We’ve survived 53 years of marriage, that’s pretty good, isn’t it?” says Valda Poletti. “But looking at that handsome Yorkshire lad next to me in the photo, I can see why”.

Two of Valda Poletti’s ancestors arrived from England, settled on land near New Plymouth and burned the bush and forest to make way for pastures of ryegrass and clover. Valda has done precisely the opposite.

This story was originally published in the Sept/Oct 2019 issue of NZ Life & Leisure.

A fantail darts around the tall mamaku ferns, a tūī calls from a nearby rātā, and a mossy path, soft underfoot, leads past pongas gently shedding droplets of rain. In the background is a soft murmur.

It might be the Te Henui stream as it gurgles past on its journey from Mt Taranaki to the sea. But it’s just as likely the sound of the city going about its business, also beyond the valley. 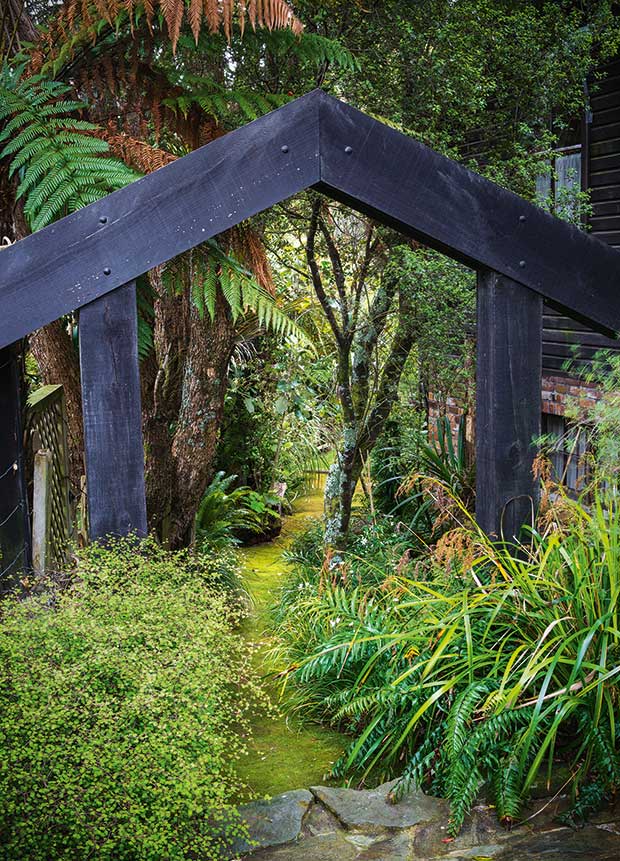 The wharenui opens to the shady south boundary of the property where moss grows on the claypan. Valda keeps the path free of encroaching grasses and liverworts. “It is a magic area, and people often take off their shoes to tiptoe along it”.

All is calm in this New Plymouth garden called Te Kainga Marire, literally a peaceful encampment, open to the public (most of the year) and one of a few throughout the country recognized as of six-star quality.

Valda Poletti and her husband David Clarkson have spent the better part of five decades creating Te Kainga Marire as a microcosm of wild New Zealand. Quite possibly, it is the only such garden in the country.

Valda is happiest either tramping or cycling in the bush with David or catching a wave off one of New Plymouth’s surf beaches. And she enthusiastically welcomes visitors to her garden. As the cold weather sets in, birds come down from the mountain to Valda’s sugar-water feeder. “It’s a popular drinking hole, sometimes with hundreds of wax-eyes. Tūīs rule the roost unless a kākā comes. But should the kererū arrive, everything else vanishes.”

“I’m a wild country lass at heart — an ageing wood nymph perhaps? — and most at home with Tāne Mahuta. He is the inspiration for this garden. My grandmothers wanted English cottage gardens, and everyone in my generation was also keen on creating gardens that looked back to Europe for inspiration. I wanted to bring wild New Zealand to town.”

Valda and David met through their shared love of tramping and the mountains. David, who emigrated with his family from Britain at 14, brought an appreciation of the dales of his home county of Yorkshire and earned his living as a deer culler. In 1972, when Valda and David decided to settle down and have a family, they bought a 2000-square-metre section of wasteland within walking distance of the city centre. 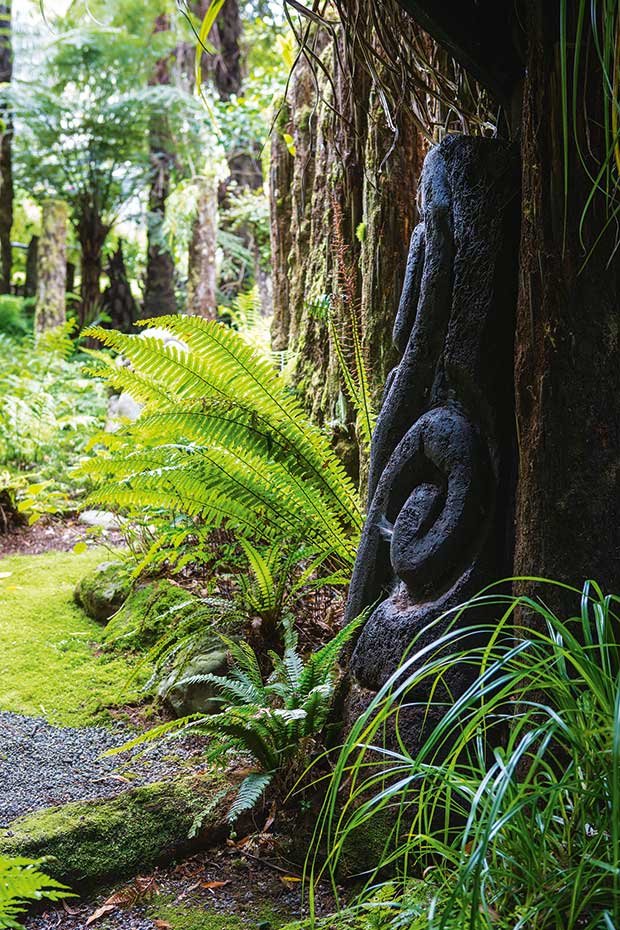 Te Awamutu artist Roger Thomas carved the Dicksonia fibrosa that stands at the entrance to the whare.

“We would rather have settled in the mountains because we are both happiest there. But we couldn’t, so we turned our back on suburbia to create a New Zealand natural landscape in town.

“David had lived mostly in the South Island high country, and we built a sort of mountain hut that complemented the garden. We call this a refugio, which is Italian for ‘mountain hut’ and a nod to my Italian heritage.” Valda is proud that despite David’s octogenarian years, he is fit and strong. “Not many men do what he can, and that’s the result of his life in the mountains, hard work and my cooking.”

That flash tramper’s shelter was to become home to them and their two sons and daughter and still is Valda and David’s home today.

Their initial assault on the weeds and gorse of their new suburban section left them with just bare clay. They were undeterred and had 2.5 tonnes of composted chicken manure delivered, spread over the section and cultivated in. After that, everything was done by hand. 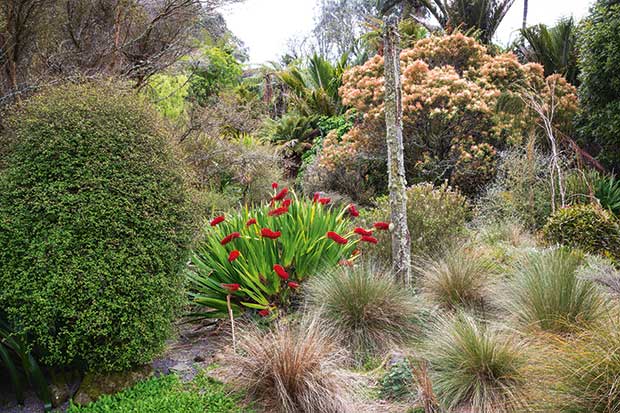 A Muehlenbeckia astonii receives a regular clip to keep bathers in an outdoor bath screened from prying eyes. The bright red flowers belong to Xeronema callistemon, a poor knights lily, gifted to Valda by the late Sir Victor Davies, a nurseryman of note who so loved what Valda was doing he wanted to “give her a treat”. The pink-hued tree to the rear is Ackama rosifolia ‘Makamaka’, a species Valda would like more widely planted. The natural grassland tends to do its own thing.

More stories you might like:
Meet the foragers turning wild herbs from Central Otago into a wellness business

The couple also brought in landscaping features, including rocks.

“We collected rocks from a family farm by the mountains. We had years and years of fun collecting rocks,” says Valda. “I used to say if I can wriggle a rock with my little body, then David and I can move it together. It was like building the pyramids. 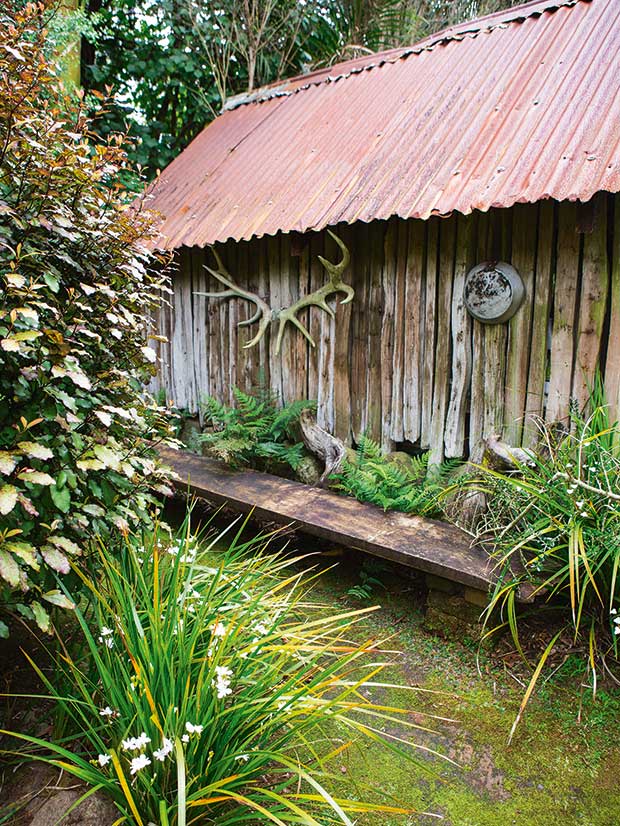 The woodshed resembles a little alpine hut, with wonky tōtara-post walls deliberately drafty to allow air to circulate and dry the firewood.

Hard graft might be the key to the soil structure, but that’s not the half of it. This garden is a story, with all the magic of an intricate tale weaving through every corner. Valda carries a clear narrative in her heart, and she sees it equally as vividly in her mind’s eye. 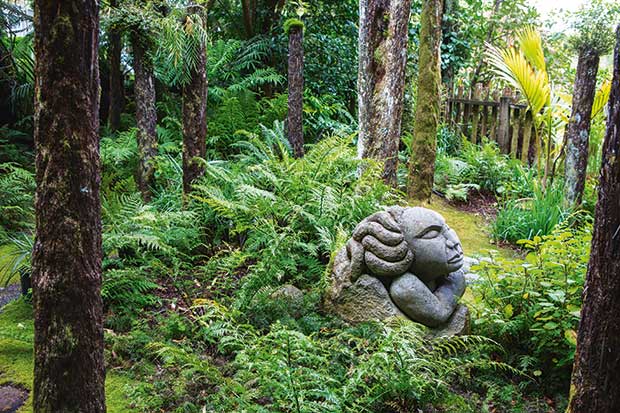 Ponga poles represent family and friends, present and passed away, and at the centre of a koru is Hineahuone — the woman formed from the soil by Tane. New Plymouth artist Reece Rongonui used andesite found in the nearby Waingongoro River to make the statue. The river was especially important to Valda as it bounded her late brother’s farm and they swam in it together.

“I know what I’m creating. It is a peaceful encampment with a sense of being in nature.”

Valda’s story might be written on a suburban section, but it is layered and extensive. There’s lush rainforest, a wetland, a pond with eels and goldfish, a bushwalk, a stand of silver ferns and meticulous alpine plantings. Additionally, and beyond this inventive planting, are structures crucial to the story.

A ponga-sided whare talks of ancient Māori encampments and a lichen-encrusted fence of tōtara battens speaks of colonial farmers. Indeed, these battens were rescued by Valda from local farms when stock fences were upgraded. A palisaded play fort has been many things, from pirate ship to treehouse, depending on the imagination of the children playing in the garden. A koru of ponga poles leads into a dark tunnel. She collected the flat stones forming the koru from the Taranaki coast. “One day, I stopped to collect them and a man sitting in a car looking out to sea came to help me. He was having a terrible time. After we’d carted rocks to my car, I shared my flask of coffee with him. He shared his troubles. He helped me, I helped him. My garden is full of such memories.”

Valda doesn’t like talking much but, sitting by the ashes of an old encampment fire and looking about this garden, one realizes with growing awe just how articulate she is. She “speaks” through the immersive experience of Te Kainga Marire and is delighted when she observes visitors discovering its singular beauty.

“I find it lovely to watch people connect with the beauty of a natural landscape and its story. The unfurling ponga poles in the koru represents the journey of life and friends and family, past and present. The koru leads into the tunnel and the darkness. This is the beginning, as you walk up into the light, unfolding like a fern frond; it is like life leading up to the light, which is life itself.” 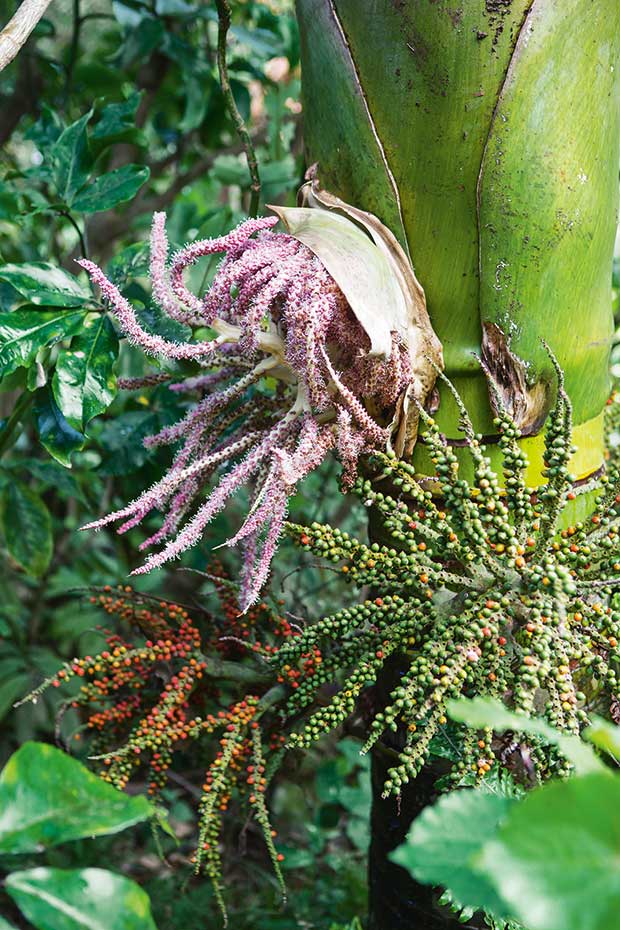 “The garden has a life of its own and I try and be the conductor encouraging the plants to play the right note”.

In the driest area of the garden, she has successfully fostered alpine planting, a significant feat given the humid and moist coastal environment of the garden in general. However, this is not a plant museum but a microcosm of a New Zealand landscape.

“Because I can visualize, I can recreate places we have been simply by putting plants and rocks in just the right settings,” says Valda. “Ferns are tucked into the deepest parts of the glades; the alpine plants are happiest in the more open areas. The only landscape plan I’ve ever used comes from the wider New Zealand natural landscape and not from a European garden design book.” It took a year to build Valda and David’s “posh mountain hut” home.

That natural appearance belies all the work that goes into it. Grooming without making it looked manicured, that’s the trick; it’s a controlled wilderness. A trimmed corokia hedge is next to a lovely little red-berried corokia from the Rainbow Ski Field Road, which remains untrimmed.

Lichens are left growing over trees as valuable homes for insects which provide, in their turn, food for birds. And dead limbs are not always removed or trimmed — they are food. Just as in the bush, a dead rātā will protrude above the planting. 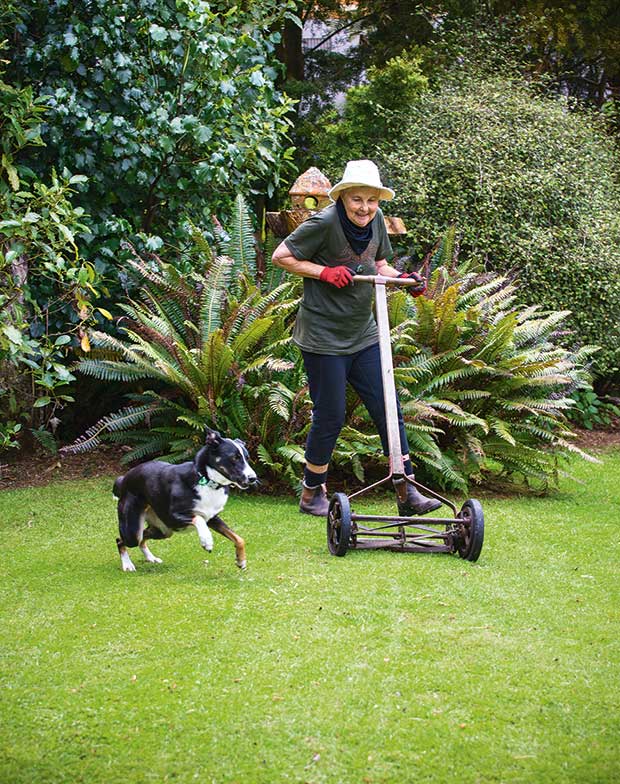 The start of the Grand National between Valda (with her vintage Cleveland hand-mower) and Pipi her four-year-old heading dog.

A kōwhai, which split in a fierce storm just days before a visit from the Gardens Trust, is left jagged as it would be in nature. Mānuka, behind the pond, keeps its dead bits as Valda loves the way it looks.

Cobwebs on the raupō give her pleasure as they shine and glitter with silver droplets in the rain. The coprosma gets a bit of a groom, however — only a little trim just as it would do in the wild with the wind whipping around it. 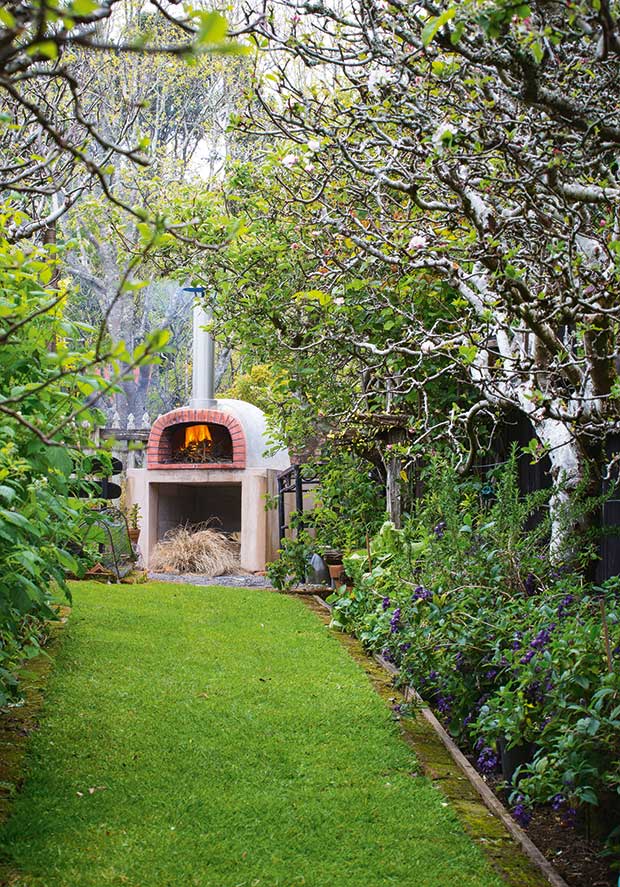 The couple grow much of their food and fruit. An alley of apples leading to the wood-fired oven includes many heritage varieties such as sturmer and granny smith.

If Valda gets her way, all her visitors will fall a little bit more in love with nature as a result of their Te Kainga Marire experience.

David says the couple has a long-held passion for conservation and wanted to do something for the environment.

“You can’t change the world’s attitude towards clearing rainforest because that’s driven by money. But you can grow native plants and encourage conservation by example,” he says.

Te Kainga Marire is one of 40 gardens in this year’s Taranaki Garden Festival. It is also the only private native garden sanctuary in New Zealand rated of international significance. The popular garden festival, from 1 to 10 November, includes garden visits as well as workshops, tours, gala events and celebrity speakers. Taranaki has the highest number of gardens recognized by the New Zealand Garden Trust as being of significance, nationally and internationally.

Native plant experts Rewi Elliot and Finn Michalak from the Otari Native Botanic Garden in Wellington will talk at Te Kainga Marire on Sunday 3 November, 2019. Tickets to that and all festival events can be bought at gardenfestnz.co.nz.