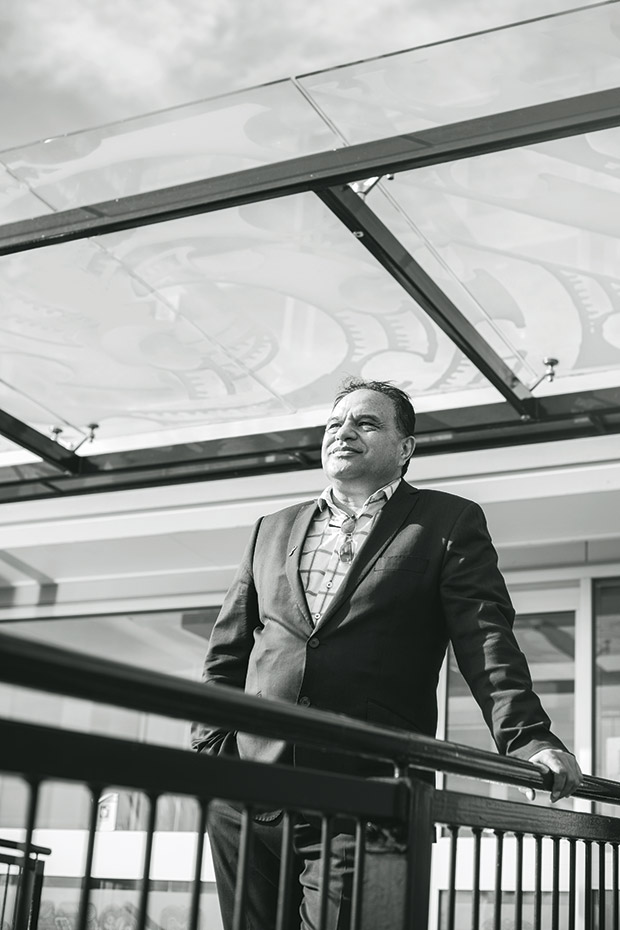 George Reedy, the recently appointed chief executive of Te Rūnanganui o Ngāti Porou, aims to ensure the road to wellbeing, wisdom, and wealth for his whānaunga is clearly marked for the next 100 years or more.

George has held executive roles for several IT companies and once co-owned Actrix, now part of Voyager ISP. He was the CEO of Te Taiwhenua o Heretaunga from 2014 to 2021 (the mandated political leader of Ngāti Kahungunu ki Heretaunga), the director of the Ngāti Pāhauwera Development Company (the investment arm for a confederation of hapū with historical interests in northern Hawke’s Bay), and the chair of Pēke Waihanga, the Artificial Limb Service.

WHAT GOALS DO YOU HAVE FOR YOUR PEOPLE?

The main goal is consolidating the tribal foundation for our communities. Iwi leadership has a responsibility to support communities to be stronger, to find a way that helps everybody — not just our people.

The first focus is to create greater capacity to finance development; the second is to find a sustainable pathway (and I believe this happens through economic growth). We must look at providing economic stimulus, financial literacy, tools, skills, and opportunities to engage in commerce — the pathway established by our early leaders. Some past government policies have been more focused on attracting voters rather than increasing the economic independence of our communities, and this legacy is not helpful.

Prosperity is fundamental to wellbeing — be it at an individual level, a good job, running and owning businesses, or growing our own communities themselves from within. It’s about making sure our people are safe and capable of keeping the home fires burning.

WHO WERE THE KEY INFLUENCERS IN YOUR LIFE?

My whāngai parents, Te Moana Rangi and Apikara (nee) Dewes, raised me in Tikitiki along the banks of the Maraehara River. Mum was a staunch Ngāti Porou woman who believed ardently in education, so there were no days off school even if it meant some rather difficult river crossings when it was flooding.

More stories you might like:
Lessons of the land: How Gemma and Mike Smith are using nature to educate pre-schoolers

My dad was a fencer, a hard-working, up-at-the-crack-of-dawn kind of man. I have fond memories of him cooking on the old wood stove and firing up the diesel generator. They were probably hard times, but my parents never complained. There was always something to eat, and you knew where the food came from. As children, we were essentially raised by the village because everybody knew you, and you knew them — your cousins, your aunties and uncles, and your nannies.

When I left school at 15, I had very little in the way of qualifications. My first job was rousing, then forestry — with the big step being a cadet at the Gisborne Māori Affairs Department, where I realized I was good with numbers. When I became a teenage dad with my wife Gaylene, I ended up going back to night school and doing extramural studies to finish my bachelor’s degree. Then I went on to get chartered accountant qualifications, and I just kept going until I ended up with an MBA.

Gaylene has supported me throughout, raising our two children, and now we have four grandsons, which has led me to look at my own Māori language journey. My dad always talked about getting caned at school for speaking his first language. He never wanted me to go through that experience, so I never seriously pursued te reo Māori. But I also know that the language is an important part of who we are. You don’t always have to be the best at it. But a good understanding is essential when operating with our Māori philosophy, our worldview.

HOW DID YOUR LEADERSHIP ROLES EVOLVE?

I went to work for Audit New Zealand in the central North Island, becoming one of their young directors about the time of the 1990 public-sector reforms. I learnt how to look at systems and processes and developed the specialized analysis and evaluation skills needed when assessing entities or businesses and putting them back together.

I moved from there to consulting in the commercial world, fixing other businesses problems, and that’s how I was introduced to the IT sector — at a time of boom and bust. It was a real wake-up call, with people realizing that business is business irrespective of what industry you’re in. Nothing sharpens the mind more than having to find payroll every week.

Then, seven years ago, I ended up in the NGO sector working for Te Taiwhenua o Heretaunga. One of the significant influences for me there was a visit to Alaska to observe the Southcentral Foundation’s Nuka model of care (see sidebar). I felt like I’d gone to the promised land for the future of Māori health. Southcentral has 65,000 people in its primary-care system, including a hospital and other services. Two key measures of its success are 95 per cent client satisfaction and 95 per cent staff satisfaction. To me, these are the hallmarks of achievement.

The key takeaway from that trip is that Māori can also create indigenous models of care that are economically viable. But we must ensure we focus on the right issues to concentrate effort and resources.

WHAT ARE THE ONGOING CHALLENGES FOR THE IWI?

Our land has sustained us for 1000 years. But we now realize that following mainstream models of land development over the past 100 years wasn’t always the right thing to do, especially on the East Coast. Clearing the land for grazing, horticulture, and forestry, even with fishing — many of those poor practices are coming home to roost.

Our focus now is on developing our natural resources to create better economic models and opportunities, to remove the vagaries and look at how we can invest in a way that sustains the land for future generations. Resolving the fragmentation of Māori land ownership is a priority as the present system isn’t working and will continue to undermine any attempt to create scale.

As Ngāti Porou iwi, we need development models that are useful to the daily lives of our people. It’s tricky as we have significant problems. My challenge is to make something from what has been done to date, find those pearls of wisdom in our own backyard, and work on solutions.

HOW CAN OUR READERS HELP?

Southcentral Foundation’s success and satisfaction rates exist because it offers extensive training that unpacks unconscious bias. I think that for non-Māori, it would be helpful if they could withhold judgement and — as that saying goes — “walk a mile in my shoes”. It’s hard when everything in the media reinforces negative stereotypes about Māori.

There are lots of things that make us unique and proud. If we can have a strong Māori economy — with our people living healthy, educated lives — everyone benefits.

Whāngai is a customary Māori practice where a child is raised by someone other than their birth parents. The child generally knows and interacts with their birth parents and other direct family members, e.g. siblings. The wider community is normally involved in supporting the decision. George has a strong relationship with his birth parents, Sir Tamati and Lady Tilly Reedy.

Te Rūnanga o Ngāti Porou signed its deed of settlement in December 2010, which included a $110 million financial package, and its asset base has grown in value to about $225 million. More information can be found here and here.