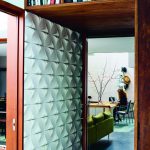 The apartment’s acoustics are great for music. “My acoustics lecturer Harold Marshall, back at Auckland University, really influenced my approach to space and surfaces. Your perception of a room is unconsciously guided by how it sounds.” 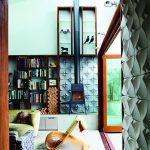 While the warehouse is very near a busy road, it’s surprisingly quiet and peaceful. The dense old masonry walls shield the interior from noise, and the bi-folds have 10mm thick glazing. “It’s not what you do but how you do it. Often, the big contextual challenges can be overcome in the detail.” 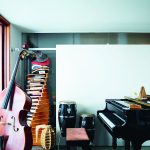 Architects often have another creative interest beyond buildings. Tim is fascinated by car design and Linley has played in a jazz band for several years. “We get together on Sunday afternoons and have fun, sometimes playing at parties too.” 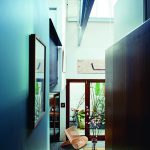 Linley and Tim wanted to make an outside space within the walls of the old warehouse. 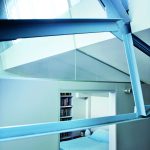 “I think it’s pretty clear where the old building ends and the new parts start.” 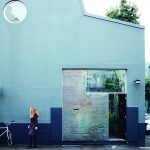 “Sometimes I think it’s strange that the building works so well for us as a home. It started out as a pretty basic building to store supplies – only had to keep the rain and burglars out. Fifty years on we lived here, as families with our babies. And another 20 years later, we still love it.”

He’s interested in how everything is interconnected; she in the personal story of her clients. This pair of Sydney-based Kiwi architects continue to make their mark on both civic and private jobs.

On a wall in the Hindmarsh-Greer inner-city Sydney home four paint samples are coming under prolonged and intense scrutiny. The youngest member of this design-eyed family, Fred 21, comes by. He observes his parents for a moment before bursting out laughing. “They’re all exactly the same colour,” he tells Linley and Tim. Even though these two take quite different approaches to their (quite different) fields of architecture, they share a 50-shades-of-the-same-colour-detail world view. Fred, who broke the family architectural ranks to study electrical engineering, doesn’t quite share it. Tim’s highly successful practice, Tonkin Zulaikha Greer, works mostly in Australia-wide civic projects – often with iconic buildings such as Carriageworks and the Sydney Opera House renewal project. He looks outwards, to the world at large, when approaching architecture. Linley, who has forged a successful career in private home renovation and addition architecture, is primarily interested in the story of her clients.

Tim: “My approach to design is based on a continual fascination with the world at large. I’m intrigued with the interconnectedness of everything.”

Linley: “I love finding the client’s story, establishing ‘who’ they really are, how they live, how they want to change their living through architecture.” 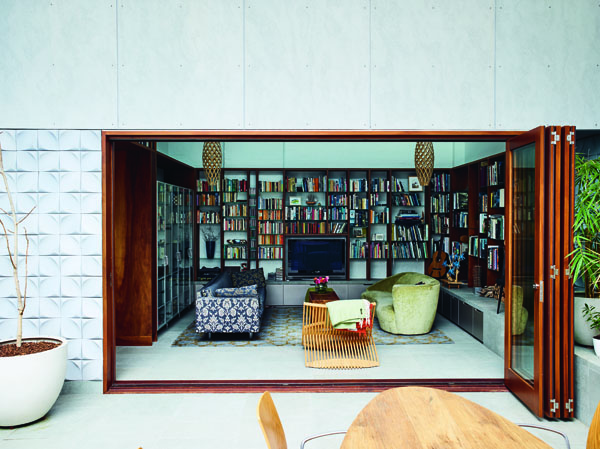 Between the two, rather varied, approaches lies a wealth of success in the challenging Sydney architectural environment to which these Auckland University School of Architecture graduates arrived more than three decades ago.

Quite soon after landing in Sydney, Tim’s career (which now includes many architectural awards) took off and since then his work has often involved re-imagining uses for historic or significant Sydney buildings. He is intrigued by the city, by its inevitable discord and the energy released by the ad-hoc nature of its parts colliding. “I like to think of buildings as miniature cities and, over the years, I’ve developed a methodology based on my fascination with the interconnectedness of everything. At a cultural level, it is a continuum of the historic and the contemporary cultures, with contemporary being seen as merely ‘the brightest light’ of the moment.

“And at the physical level, I’m fascinated by the notion of a greater system, which doesn’t see buildings as objects in their own right. They can’t escape being part of an urban setting, a landscape, a social network or even a moment in time. I view the city as being an evolving organism, ever changing. Thriving and dying, receding and regenerating.” 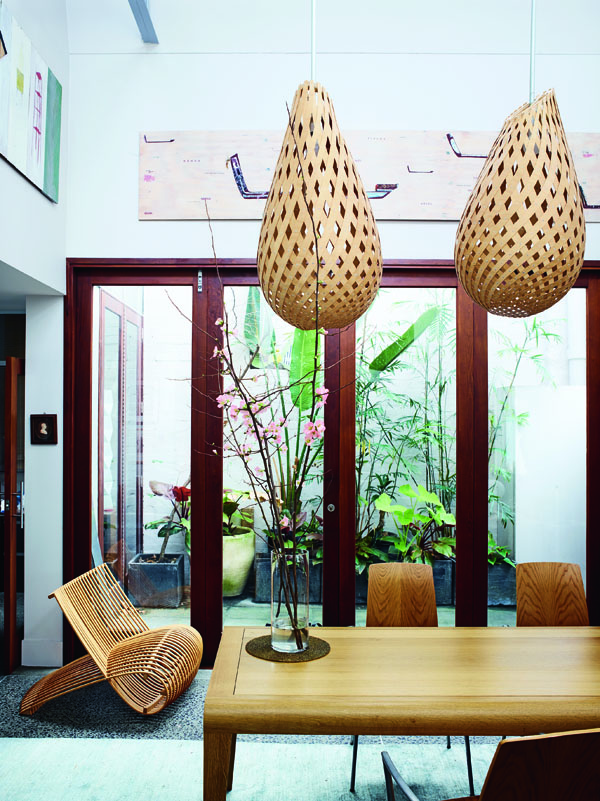 Linley is more into the detailed fabric of her client’s lives. “I love bringing the individuality out of a project and I can only do that when I understand their journey. Everyone has a story and I think it’s really important my clients keep that story with them in their new home. I get lost when people want to throw out everything from their previous lives and start with a white minimalist box and no trace of a former life. “It’s about helping them make their house different from everyone else’s and giving it character that reflects its family. I like to sit with them in their homes and really learn what it is that makes their home their own. I really don’t like everything to look the same.”

One of the challenges Linley relishes most about domestic design in Sydney is finding space on tight sites. It is increasingly the case that she needs to find better living spaces in tighter areas. Perhaps her childhood fascination with building hay-bale homes on the farm where she grew up in Hawke’s Bay is coming in useful here. “I really get a kick out of making smaller spaces feel bigger and accentuating the continuity of space from outside to within. I love finding tricks, like trying to get in double-height to elevate the sense of space.” Here, the connection between inside and outside is strengthened by extending the high roof over half the courtyard, using the same porcelain floor tiles inside and outside, bringing the concrete external wall tiles into a living room and using ‘ambiguous’ furniture in both areas.

Helping people live well in smaller spaces is as much a challenge in Sydney as it is in Auckland but there is one difference that both Tim and Linley observe. “In Sydney the view is king, even more than privacy and, as it is not an earthquake zone, it is easier for the engineers to keep the structure fine and the windows big.”

Tim, whose architectural heritage is the transplanted English buildings of his hometown Christchurch, says there’s been a revolution in Sydney in the past 10 years with people, especially younger people, embracing apartment living. 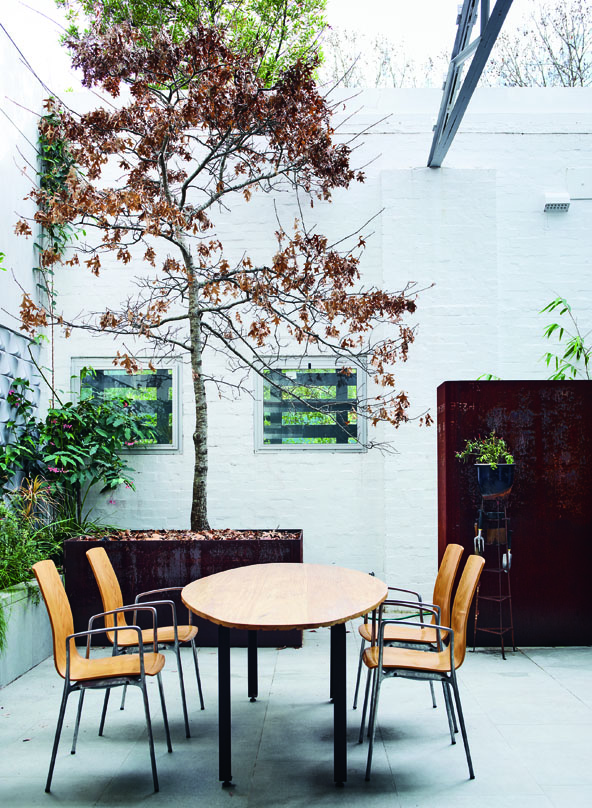 However, back in the early 1990s he, Linley and three other young couples (all architects) decided that they’d like inner-city high-stud-style living. So they set out to find a suitable building to convert into an apartment for each couple. After a long hunt, they found the perfect 1940s building for their project – a stores warehouse for the Royal Prince Albert Hospital in Newtown.

“We cut the building into slices, rather like a loaf of bread. And the fatter the slice, the more you paid. We all did our own things and it was such great fun. We’d be nipping round to each other’s house to see what they were doing.”

Two of the original couples remain – when one couple wanted to move some years ago, Linley and Tim bought them out and developed their “slice” further with a courtyard and double height library/television room. Tim and Linley wanted to leave most of the original building untouched and they had to work around the positions of the existing steel trusses. This meant arranging the stairwell below one so that the steps split off to different bedroom floors above.

Buying this building and developing their warehouse home has been “the best thing we’ve ever done for our way of life”, says Linley. “I think some might wonder whether it’s a place for children, but Fred has loved it here, and there are plenty of good parks and transport in the area.”

These days Linley spends a lot of time in Auckland working on a residential development in Freemans Bay. She and her long-time friend, Alison Hunter, whom she met while working for an architectural firm in London more than 30 years ago, are having fun managing a development adjacent to the motorway with Sky Tower, harbour bridge and city views. “Our touchstone is: would we love living here? And yes, we would.” Foundries is a mix of loft-style townhouses and inner city boltholes, called (respectively) The Lofts and The Bolts. It is a challenge they love. 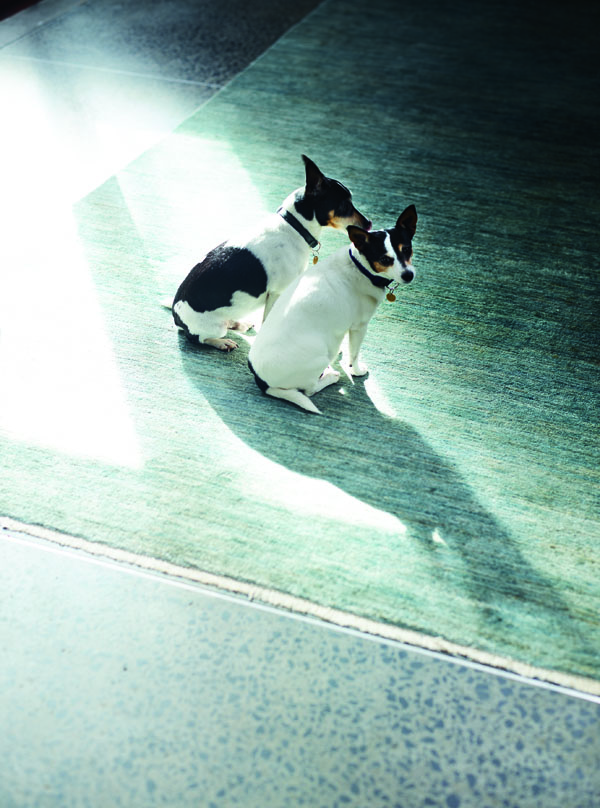 “It’s important we create well-designed inner-city living for intimate spaces, with plenty of sunlight and views. And then it is even more important that people demand the city provide services to support successful high-density living, such as parks and public spaces,” Linley says. “All the great cities of the world couple denser urban living with lively open spaces and shared amenities, and of course Auckland is a great city.”

CREDIT DUE
Tim’s impressive Sydney achievements to date include:
❱ The Carriageworks Contemporary Arts Centre
❱ The Scots Church Apartment Redevelopment
❱ The Paddington Reservoir Gardens and The Glasshouse
❱ The Arts Conference and Entertainment Centre
❱ The Bennelong Restaurant Kensington Street Precinct, including The Old Clare Hotel
❱ The Paddington Reservoir Gardens, which has won 14 design awards including the 2010 WAN Urban Design Award
❱ He is currently working on the Sydney Opera House renewal programme
❱ His contribution to architecture was acknowledged in 2010 by the Sydney Morning Herald in its annual 100 Most Influential People issue