The best way to be zero waste on a block Waste from your block is actually quite the opposite to its name — here’s how to make the most of its value.

The number one thing you can do to stop rubbish going to landfill is to create a composting system. The keyword is system. It needs to be easy to use as part of your family’s daily life, and accommodate a block’s bulk composting requirements, such as lawn clippings, horse manure, or animal bedding.

Ben Elms – known as Dr Compost – has spent 20+ years experimenting and educating people about composting and shares the system he uses on his 20ha block at Hawea, 20km north-east of Wanaka.

Ben has also been experimenting with underground worm-farm systems, which do exceptionally well in regions with freezing winters or very hot summers He recommends multiple buckets, which you can site in your garden beds and make yourself. Most blocks generate a lot of waste material in one go, for example, when mowing the lawn. Ben has a line of compost bins made from old wood pallets which do the job and allow for good air circulation. Each one is about 1m wide, 1m deep, and 1m high, a good size for creating a hot compost pile.

Keep compost bins in open areas, not up against a fence, hedge, or near an area of long grass, as rats use these as cover to move around undetected.

The number one mistake people make is not having enough carbon-based ingredients to mix in with nitrogen-rich waste, such as lawn clippings.

Ben saves piles of cardboard, straw, woodchips, wood prunings and other carbon materials, and has them waiting beside his bins for when he’s making compost. He’ll often soak them in water to help them decompose more quickly. 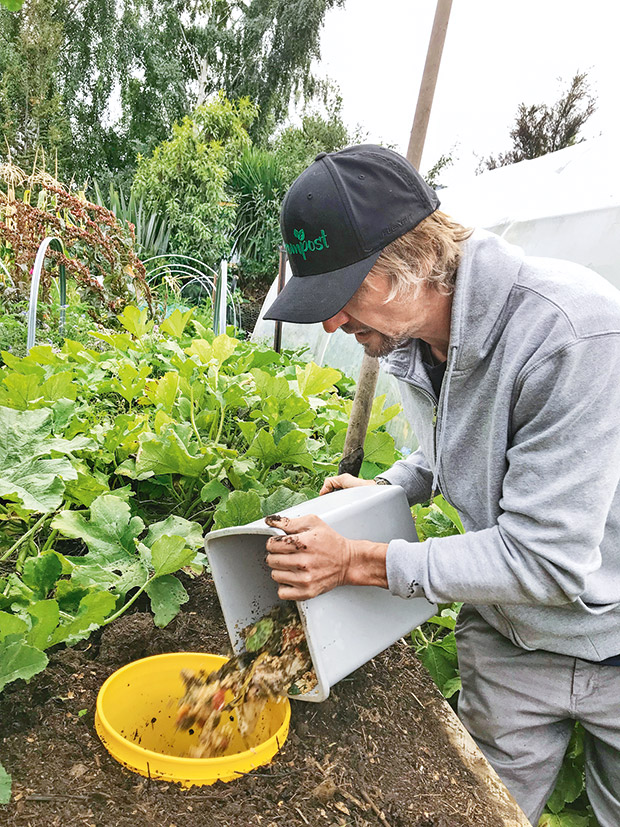 Ben says he gets very excited about mowing the lawn because it means he can make a hot compost pile. Lawn clippings generate high temperatures (ideally 55°C-65°C) which kills weeds seeds and makes everything in the bin decompose at a much faster rate. “I see it as a resource, so I’ll often mow the lawn and make compost right after.” His ride-on mower doesn’t have a catcher, so Ben collects it using an old push mower.

“I’ll do a couple of catcher-loads and that’s one layer of compost, then add some carbon, a different layer of scraps or horse manure, and then carry on mowing. It becomes a bigger day, but you’re harnessing that resource.”

In contrast, most people who think they’re making hot compost, aren’t. “Generally, they’re making cold heaps by gradually adding stuff, with the odd glut, and they wonder why it doesn’t heat up,” says Ben. “It’s because they’re not making it in the one hit.” 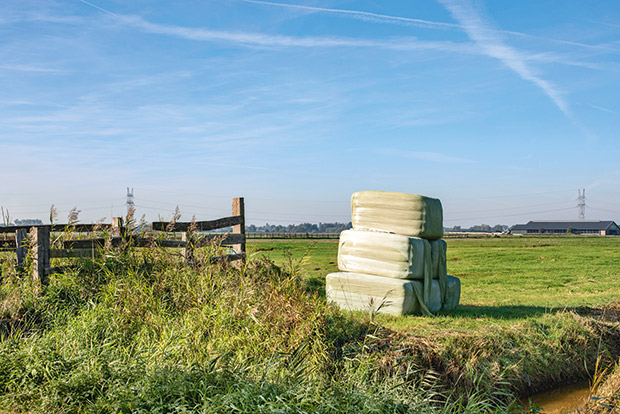 HOW TO RECYCLE FARM PLASTICS

There are two schemes helping farmers to recycle plastics. AgRecovery and Plasback send waste plastic to Auckland company Astron Sustainability, which turns it into products such as underground cable covers and plastic ‘plywood’.

Protocols surround the recycling and disposal process. Check the AgRecovery website for a drop-off point close to you – most are rural supply stores – and for annual community collection events. Check the brand you want to buy to ensure it has the AgRecovery logo on it, which makes it eligible for free recycling.

Plasback is a paid-for service aimed predominantly at commercial farms. However, it also sells a smaller (recycled plastic) bag to suit block owners. Each bag costs $8.05 and holds around 20 standard size silage wraps. The collection cost, once it’s full, is $20 plus GST per liner.

A food farm in the heart of Remuera: Take a tour of zero-waste gardener Peter Ng’s garden oasis