The re-wilding of Joanna Wickham: This photographer left Auckland to run a glamping business in the bush 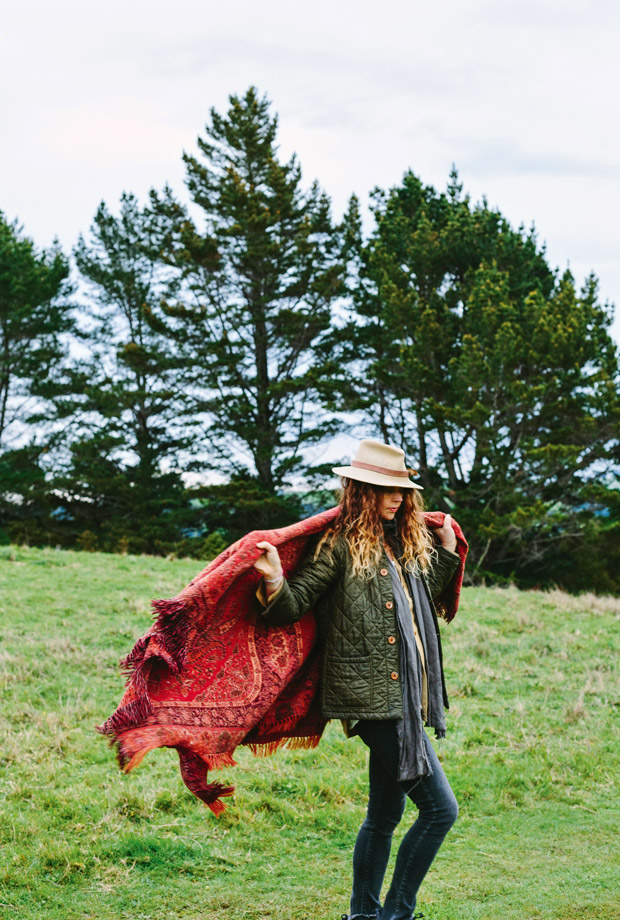 A ballad of birdsong, rushing water and rustling kauri caused this photographer to swap the crowded streets of inner-city Auckland for the gravel roads of Donnellys Crossing.

Each morning, Joanna Wickham peers from behind her curtains and hopes to see the forest on her doorstep. For two years, the thick green wall of native bush has been creeping closer and closer, leaf by leaf.

Joanna lives in the hope that one day soon, Mother Nature will hitch up her skirt and take a bigger step towards the lawn. But, for now, a slow crawl will do. The photographer and former city-dweller is the protector and kaitiaki of this nine-hectare forest in Donnellys Crossing, 50 kilometres north of Dargaville.

Joanna is a passionate champion for “re-wilding”; there are parts of her untamed property where no one steps, herself included. There is no pruning or replanting. No paths, no signs. No helping hands. Instead, she observes from afar while Ernie the longfin eel patrols the creek, a beady eye looking for intruders. Kiwis nap beneath sleeping bags of moss, waiting for their night shift.

Far above, centuries-old kauris look down on the thick bush canopy. The younger brothers of Tāne Māhuta are the backbone of this quietly wild forest. They stubbornly planted their roots in the land left destroyed by milling and refused to budge. 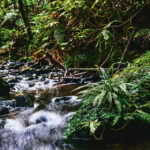 The forest attracts the like-minded; visitors to Joanna’s home include an etymologist from Oxford University and an expert from the Cairns Botanic Gardens. 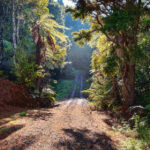 One of Joanna’s first decisions after moving from Auckland to Donnellys Crossing was placing the forest back under nature’s wing, and leaving it be. The process of letting nature reclaim ownership, known as re-wilding, allows regeneration without intervention.

Projects such as Joanna’s kauri forest are “passive re-wilding”, where human caretakers step away and enable complicated and often damaged ecosystems to repair and re-establish. There are no chemical sprays on the property; anything that she uses is organic.

“The soil is, quite literally, what grounds us,” wrote the aptly named Isabella Tree, author of Wilding – the Return of Nature to a British Farm. “It is the invisible foundation of all that we see emerging before our eyes; it is the great recycler, the connector, the key to life itself.” Joanna agrees. “Everything has its place in the world — the soil, birds, insects, lichen, trees, moss. The kauri trees are 100 to 120 years old; they’re precious.” 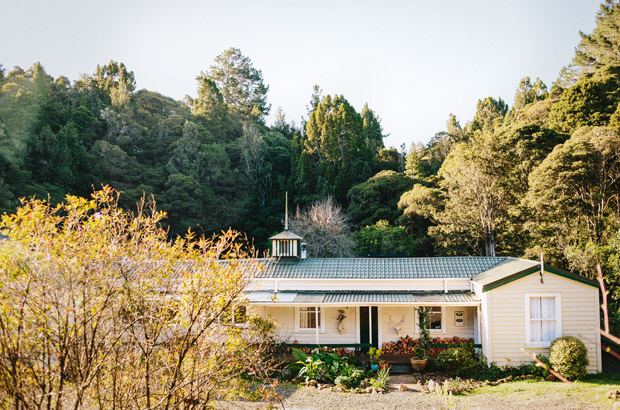 “An architect altered the main house in the 1980s using recycled bits and pieces from a church, hence the steeple and leadlight windows. An English couple then called it home for 14 years. They’d been developing the business for three to four years before the marriage came to an end. He thought he would be carted out of here in a box, but it wasn’t to be”

Joanna grew up on a Taranaki farm, which rode the Tarata Saddle. It wasn’t uncommon for her parents to wake to a neatly made bed, not because of their daughter’s tidy habits – she had a tendency to disappear into the bush and sleep with the stars as her night light.

The evening sky was her happy place. Her childhood was full of forest freedom and fantasies and, from her little spot beneath the Southern Cross, she dreamt of far-flung adventures and a well-traveled life. After leaving the farm, she left footprints in Sydney, Edinburgh, London and India, slept beneath stars in the Namib Desert and sold crystals and oils with an American First Nations vendor in Galway.

Yet the further she went from New Zealand, the more she felt a pull home. “I thought I would find my ‘something’ overseas, but I realized how much of a Kiwi I am. I feel connected to the land.” 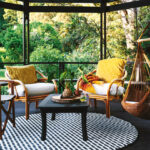 The furniture in Joanna’s home and the Kauri cottage was sourced in hospice shops and junk stores between Dargaville in Auckland — the Ellerslie Hospice Shop, in particular. The hammock on the back deck of the cottage is from Citta Design. 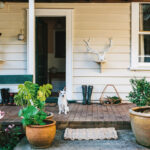 Joanna’s uncle recently measured 18-year-old jack russell Eddie and pre-dug his grave, knowing Joanna would be too distraught when the time came. Stubborn Eddie is now enjoying a renewed lease on life, perhaps to prove a point. 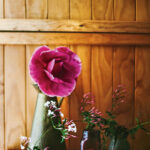 She returned to New Zealand, and in 2000, moved to Wellington to study photography, where she refined her skills and trade by assisting photographer and artist Fleur Wickes (NZ Life & Leisure, July/August). Joanna dreamt of capturing images as a war photographer (she’s a great admirer of Brazilian photojournalist Sebastião Salgado).

However, upon meeting those returning broken and bleary-eyed from war zones, she turned her eye to the romantic. “It became clear that you don’t recover from being in the field – war alters you. So I decided to take my love of documentary photography and apply it to weddings. I love projects that take on a life of their own and weddings are such beautiful things to witness.”

Joanna and her former partner Dion made their home in Auckland’s Freemans Bay. By day, she captured glassy-eyed fathers of the brides and collaborated with architect Dion, photographing interiors of the homes he had designed. At night, she would meet the travelers who booked the couple’s spare room through Airbnb. 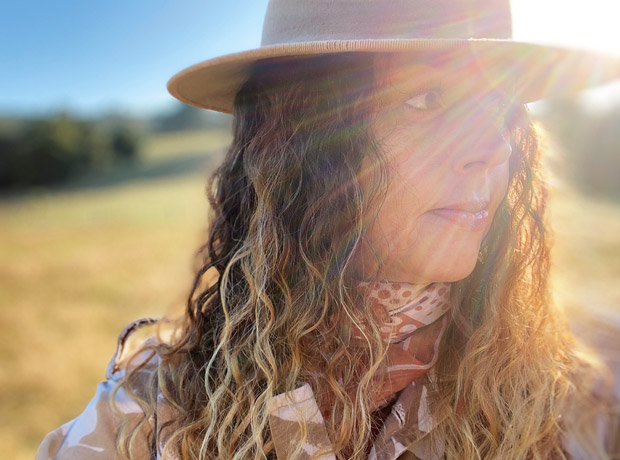 Joanna is an introvert by nature and has found her place in the depths of Donnellys Crossing. Yet she’s never far from the influence of deep-thinkers and great minds. “I love podcasts and often pop one on while gardening. The Doctor’s Farmacy by Dr Mark Hyman focuses on how to thrive naturally, and The Tim Ferriss Show highlights the world’s top performers.”

“I love the spirit of traveling – it takes you somewhere different psychologically. People are more relaxed and open, and I thrive in that dynamic.” However, after 18 years of urban life, and some relationship upheaval, Joanna began to crave the comforting glow of stars in the wilderness.

In mid-2017, Joanna fired up her computer, looked up at her patchwork mood board of magazine clippings, and began tentatively searching for her next adventure. The keyword? Glamping.

Six long months passed in a muddle of pondering, saving and researching before she found a listing for 14 hectares with an established glamping business. The listing price was $600,000, and she settled for a very un-Auckland $555,000.

“It was unbelievable. I had been looking for bare land, but the calculations of setting up a business from scratch didn’t leave a lot of flexibility. It needed some TLC and fresh ideas, but it was all there. When my dad first visited, he smiled and said, ‘This is everything you loved as a kid.’ And it’s true.” 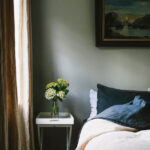 A family of five children grew up in the small two-bedroom house, and they often return to reminisce, most recently to celebrate a 50th wedding anniversary. There’s something strange but sweet, laughed the bride, about celebrating your wedding in the room where you were probably conceived. 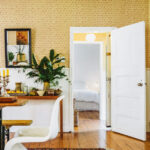 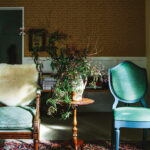 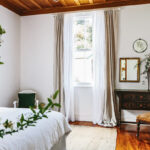 There are three arms to the business: the Owner’s Cottage, the Lotus Belle Tent and the Tin Box (a renovated shipping container). Joanna invested an additional $100,000 to bring the accommodation up to scratch, upgrading tracks and the septic systems and undertaking necessary renovations.

Learning to run an accommodation business has its complexities, let alone one with the hurdles of being off-grid and immersed in thick bush, accessible only by a golf cart. Solitude has its downside, especially when water comes from a century-old dam and challenges have a tendency to arrive when least expected or wanted (like the night a hot bath ended in a flooded bathroom and a partly destroyed wall).

“Things go wrong constantly – and usually when guests are pulling into the driveway. It’s empowering to learn the processes and be my own repairman” says Joanna, whose rapidly expanding collection of hats includes plumber, cleaner and stylist. 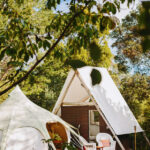 Hidden in the bush and accessible only via a golf cart, the Tin Box and Lotus Belle tent are off-grid. The self-catered spaces each sleep two, have outdoor baths (with a gas ring for constant heat) and, yes, flushing toilets. 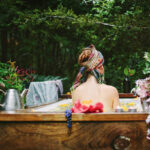 “It’s incredibly hard to for people to put down their phones and switch off. I see guests who are unsettled by the lack of reception,” says Joanna. 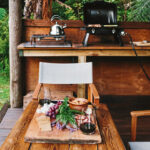 Unfortunately, global pandemics pay no mind to plans, and just as Joanna felt ready to relaunch properly as Wild Forest Estate, travel as the world knew it suddenly disappeared. If one had to choose where to be during an international health crisis, somewhere down a lumpy-bumpy gravel road where kiwis outnumber residents isn’t half bad.

While Joanna had challenges to face with her business, on a personal level lockdown was lovely. “I created my alternate reality and hid away with the river, bush and birds. Technology meant long overdue catch-ups with friends in London and family chats with a drink in hand.” Between quiet patches, there were lots of laughs and quality conversations, plus time to invest in overdue creative projects. 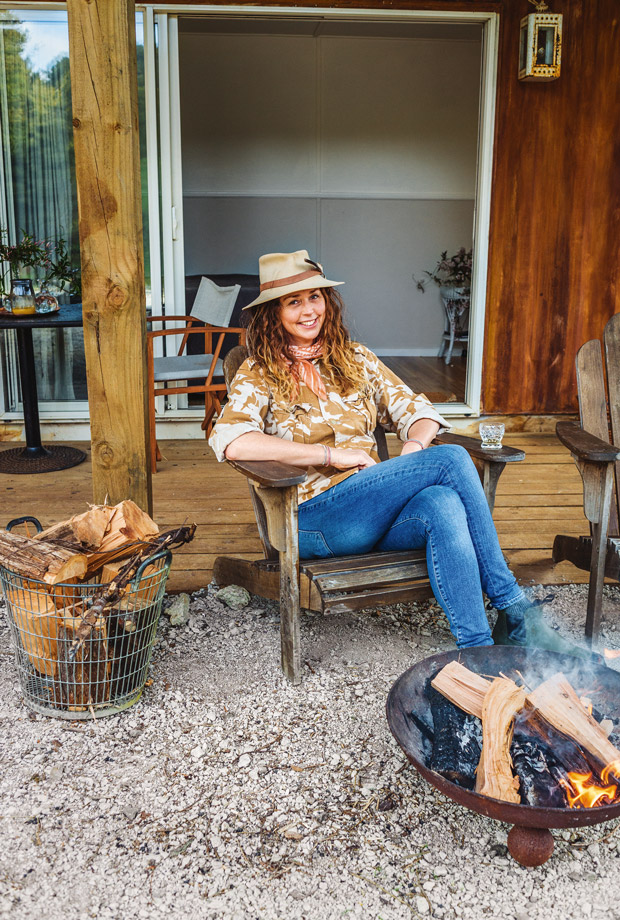 As the first round of restrictions eased, Joanna had an influx of bookings and surpassed the previous year. Wild Forest became a type of stepping-stone between life pre- and-post pandemic. As New Zealanders quietly re-emerged into the world, many sought escapes where they could enjoy the freedom of post-bubble life without being overwhelmed.

Her first trip into Dargaville outside of level four saw locals beaming and greeting each other enthusiastically (though from two metres apart). “Yes, being a tiny island is helpful when the shit hits the fan. But as a country, we’re nurturing and caring. We’ve looked after each other – we should be proud.”

The once prosperous Donnellys Crossing Railway now sits in rusted remnants. It was built in 1889 to ferry enormous kauri logs from the Kaipara forests to Dargaville and beyond, and for years it was thought to be one of the most profitable lines in New Zealand.

But as the once-prolific trees gave way to increasingly bare land and cries for the protection of kauri became louder, the railway often sat in silence. The station closed in 1959, and as years have passed, the local population of Donnellys Crossing has declined to a stoic few. 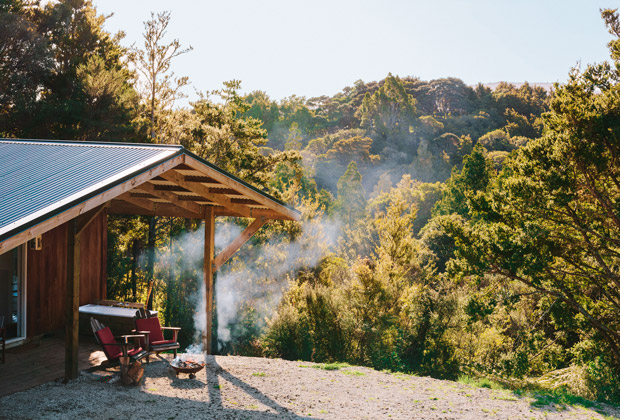 At first, Joanna’s desire to trade inner-city for outer-nowhere mystified her friends. While leaving the harbour bridge in the rear-view mirror isn’t for everyone, the adjustment wasn’t difficult for the confessed introvert. “Life in Auckland has an intensity, and when I turn off at the Brynderwyns, I feel myself physically relax. Every time I hit the gravel road, I’m driving into an adventure.

“Donnellys Crossing attracts characters — people who want to live life their way. The locals come from all over the world. They’re well-traveled but arrived here and thought ‘this is the spot’. We share a spirit, but everyone is unique; they can’t help but be themselves. We’re connected not through duty but pleasure. We keep an eye on each other. My lawnmower broke down, and I couldn’t ring my neighbour directly, but the bush telegraph went to work, and before I knew it, two people were helping to fix it. It’s an old-fashioned community; what I imagine life pre-technology to be like. There’s nowhere quite like it.”

Glamping at Wainamu: Jim and Anna Wheeler on transforming the camping experience