These cousins wanted to learn te reo Māori with their children — so they created a bilingual book series, Reo Pēpi Cousins Kitty Brown (middle) and Kirsten (right) believe in an indigenous approach to restoring Pukekura, their ancestral maunga and pā located at the northern tip of Otago Peninsula. Even Kitty’s daughter Kuini (2) is keen to get her hands in the earth.

A vision to reclaim their ancestral language prompted these Dunedin cousins to create a bilingual resource for future generations.

If ever there were a woman to follow her gut, it’s Kitty Brown. For nearly a decade, a gentle tug in the stomach caused the Christchurch-born wanderer to pack her belongings, yet again, for another faraway job in hospitality. But when her worn-out van slowed to a halt at Portobello, a small village on Dunedin’s Otago Peninsula, Kitty’s gut betrayed her nomadic ways.

“Do you want to stay?” cooed her aunties and uncles, pointing to a ramshackle crib on the beach. And Kitty knew she was finally home.

One could wager that it was not just her whānau who smiled on this day. For Kitty, the pull of this coastal landscape is undeniable. It is where her Ngāi Tahu ancestors (of Ngāi Tahu, Ngāti Māmoe and Waitaha descent) transformed a wild strip of land into a prominent Māori settlement. 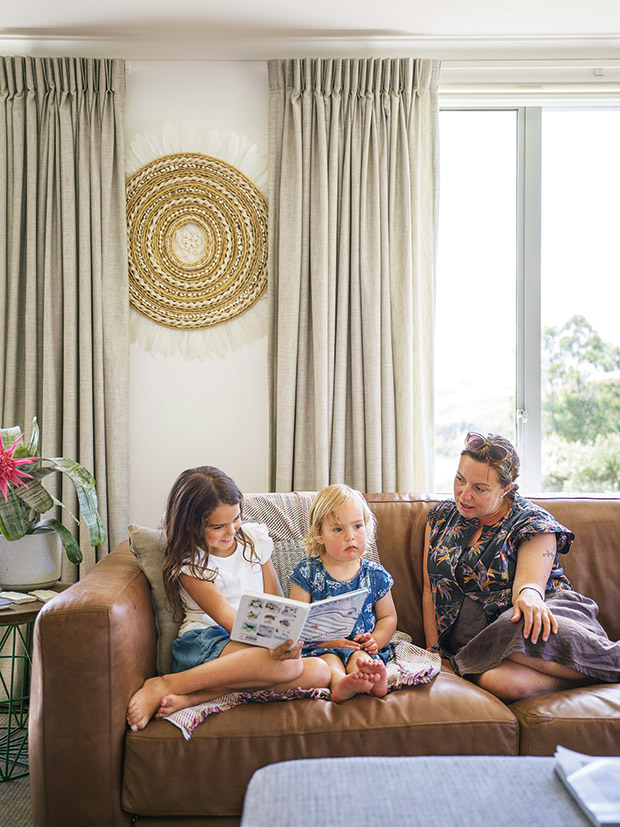 The cousins live just around the corner from one another so impromptu visits are expected. Here, in Kirsten’s home, Kitty reaps the rewards of their hard work as she watches Mihi and Kuini read a Reo Pēpi book aloud.

“Māori didn’t really live in Dunedin city as we know it now. They mainly lived on the peninsula, from Portobello and out towards the coast. We consider ourselves to be living on our papakāinga [ancestral home],” she says.

Kirsten Parkinson didn’t fully understand the significance of the place where she grew up until — like her cousin Kitty — she returned as an adult. That’s not to say she didn’t adore the peninsula. She recalls swims and picnics at the beach near Pukekura, the sacred mountain at the mouth of Otago Harbour, and trotting along the coastline on her once-wild pony.

It wasn’t until she and her husband Dan moved away — first to Auckland, then to Japan for four years — that its significance became apparent. “I remember holding back tears as we drove down the long windy road on the peninsula knowing I was indefinitely leaving this place of deep connection,” says Kirsten. 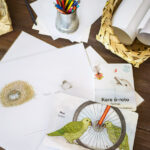 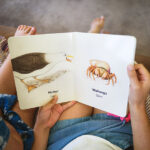 Kitty and Kirsten, cousins and creators of bilingual children’s books Reo Pēpi, are on a journey to learn and share their ancestral language. It was here on Otago Peninsula, just before Reo Pēpi became a twinkle in their eye, that they began studying te reo Māori for the first time. Neither were brought up with the language; their parents and grandparents being taught to “leave the old ways behind”.

Says Kitty: “Many Ngāi Tahu lost the language because of early colonization in the deep south. A senior leader once told me that no whānau could hold on to every Māori tradition. For instance, his whānau had kept te reo while mine kept māhika kai [food gathering].”

The desire to reclaim the language grew with motherhood. In 2012, Kitty had her son Tama. That same year Kirsten, already mum to eight-year-old Joe and five-year-old Jacob, gave birth to daughter Mihiata (Mihi). Both mums saw te reo Māori as a powerful tool for their children’s future. 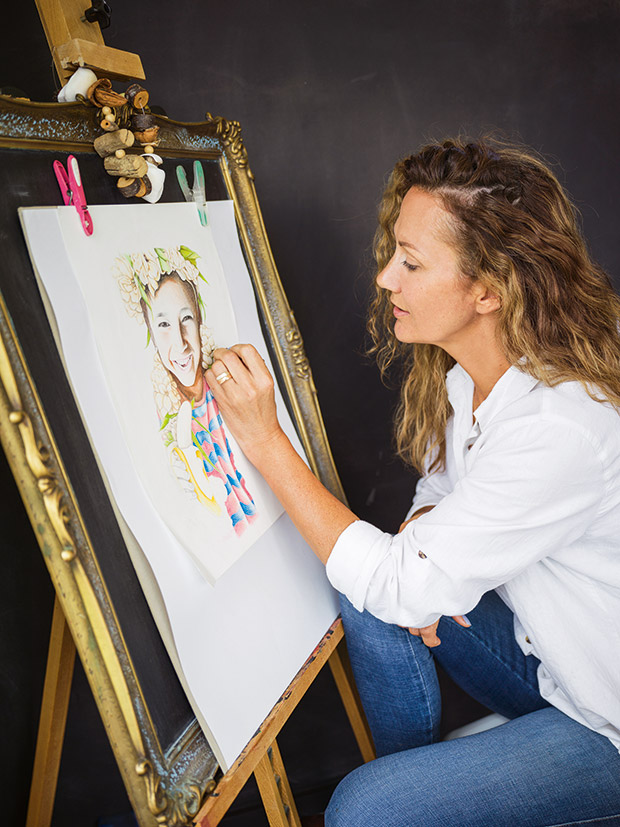 Kirsten Parkinson, the illustrator of Reo Pēpi, has been drawn to colour, texture and shadows for as long as she can remember. As a toddler she was once caught, paintbrush in hand, beaming with pride over her large-scale painting on new kitchen cupboards. “Mum couldn’t tell me off because I looked so proud of myself,” she says.

Says Kitty: “They say that the culture can’t really be known, accessed or truly lived without the language. I wanted my children to connect with Māori culture and, to do that, we needed the language.”

At the time, it seemed there were few if any children’s books in te reo Māori. Kitty was on maternity leave when she and Kirsten agreed to take matters into their own hands. Despite no publishing experience, they decided to create and self-publish a bilingual children’s book, Kitty as author and Kirsten as illustrator. Reo Pēpi was born.

It’s easy to chuckle at the mistakes made in the early days. “It was really DIY,” says Kitty. The first series, aptly named Tahi (one), was built on a foundation of hastily made Google searches, YouTube videos, funding applications and much-needed translation help from Ngāi Tahu senior te reo advisor Fern Whitau. Kirsten’s home is used as headquarters for whānau gatherings and business meetings.

“How crazy were we?” says Kirsten. “We spent countless nights staying up until midnight brainstorming ideas.”

For Kirsten, a trained artist and former art teacher, illustrating a book was an opportunity of a lifetime. After all, this is a woman who spent four years pinning up canvases in her and Dan’s teeny apartment in Tokyo (where they lived for his rugby career) and splattering them with colour.

Now a dance teacher (another love) at Otago Girls’ High School, Kirsten appreciates nothing more than curling up on the couch with a pencil and paper. “Many people enjoy reading a book in their free time — that’s drawing for me,” she says. 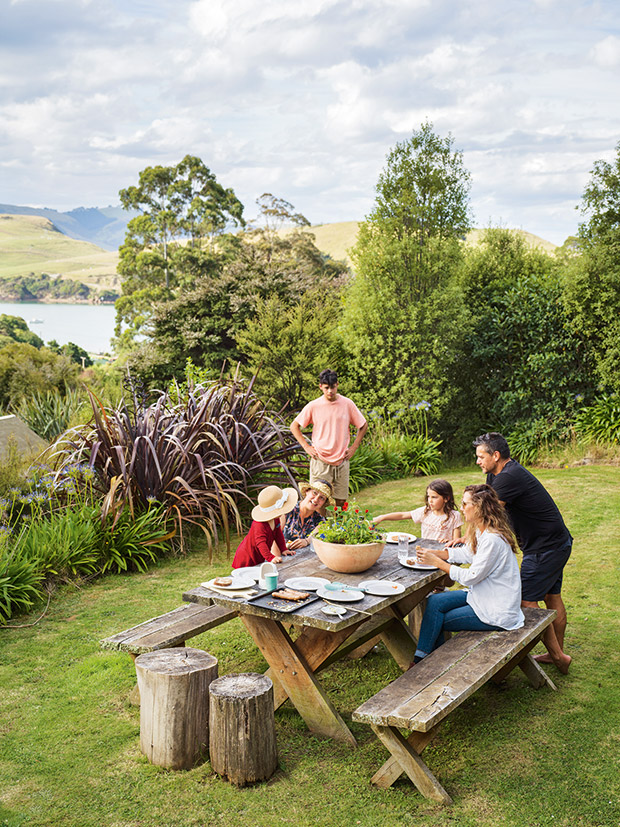 Gathering over kai (food) has long been an important tradition in their whānau. Kitty and Kuini settle down over a shared meal with Kirsten, Mihi (8), Joe (15) and husband, Dan.

But illustrating a book as a working mum? “Madness,” she says. It took Kirsten nearly a year to complete the first book’s watercolour artworks, illustrating in her spare time. It probably didn’t help that she painted large-scale works — triple the size of a book page — or that each was a painstakingly detailed portrait of hers and Kitty’s families. (Kitty’s two-year-old daughter Kuini is the only face missing as she hadn’t yet been born.) “It was such a labour of love and took me forever,” she says.

Over three years, the two mums brainstormed, wrote, translated, edited, illustrated, funded and priced a series of three picture books. (Apparently, one book wasn’t enough for them.) Finally, thanks to a grant from South Island iwi partnership fund Te Putahitanga, the first Reo Pēpi series was ready to publish. Mihi shares a special bond with her pony Zoe which she rides to the surrounding hills, beaches and beyond.

In 2015, the Dunedin duo held their breath as 3000 books were sent to small bookstores across Aotearoa. Would the books collect dust on shelves? Likely, they thought. “They were gone in no time. It would’ve been worth ordering three times what we did. We seemed to make that mistake over and over again,” says Kirsten.

Over the past five years, Reo Pēpi has reprinted 10 times, with sales surpassing 20,000 books. Last November, the pair released their third series, Toru (three), in partnership with independent book publisher Allen & Unwin. “I never would have dreamed of illustrating nine books that would be enjoyed so much across New Zealand. I still have to pinch myself,” says Kirsten. Would they do it over again? Absolutely. Kitty didn’t bat an eyelid at the challenges of self-publishing when they started. After years of a work-then-travel lifestyle (several of which were spent in Britain), she and husband Dan settled in Portobello in 2007, where she cut her teeth in event management for the Otago University Student Association and — eventually — her iwi, hapū and for Dunedin city. Over the past decade, she has amassed a wealth of experience that helped bring each Reo Pēpi book to fruition.

Says Kirsten: “I would’ve fallen flat on my face if I had done this alone. Kitty is the engine behind Reo Pēpi, and I’m the trailer — I just follow along and do the fun part. I think Reo Pēpi will become increasingly special as time goes on. With my cousin and best friend, I’ve created a taonga [treasure] for our children.” 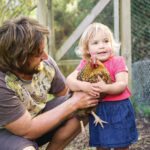 Kitty and Dan’s garden doubles as a playground (and place to cuddle chooks) for Kuini. 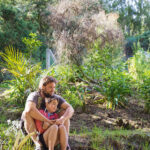 Kitty met Dan (pictured with eight-year-old Tama) in the Coromandel two weeks before moving to Britain. Love prompted her future husband to save enough money to join her two months later. Coincidentally, Kitty and Kirsten’s husbands share the same name. 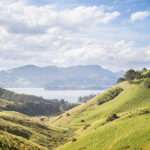 Pukekura, where their Ngāi Tahu ancestors resided for centuries, is 12 kilometres from where they both live in Portobello. 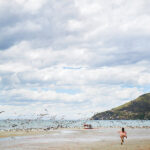 Kirsten’s daughter Mihi chases seagulls at Te Rauone Beach, where her mum and Kitty once played together as children.

The Allen & Unwin deal gives the pair time to step back and serve their community. Both are involved with the restoration of Pukekura, their maunga and ancestral pā, and hope to return the land to its former ecological and spiritual glory. “That’s what the mahi (work) is about — restoring Pukekura and returning that life force to that area,” says Kirsten.

Living so close to the source of their whakapapa (genealogy), Kitty and Kirsten are also helping restore the oral traditions of their past. “Whakapapa doesn’t only reach into the past; it carries us into the future,” says Kitty. “Reo Pēpi is our way of putting something forward for the ones to come; for the children who may have a better chance than us to learn te reo Māori.”

Reo Pēpi was initially intended for the earliest stage of language learning, with series Tahi (pictured below) and Rua focused on simple te reo Māori words and phrases for children under five years old. Kitty and Kirsten developed each book based on the common words they use at home. 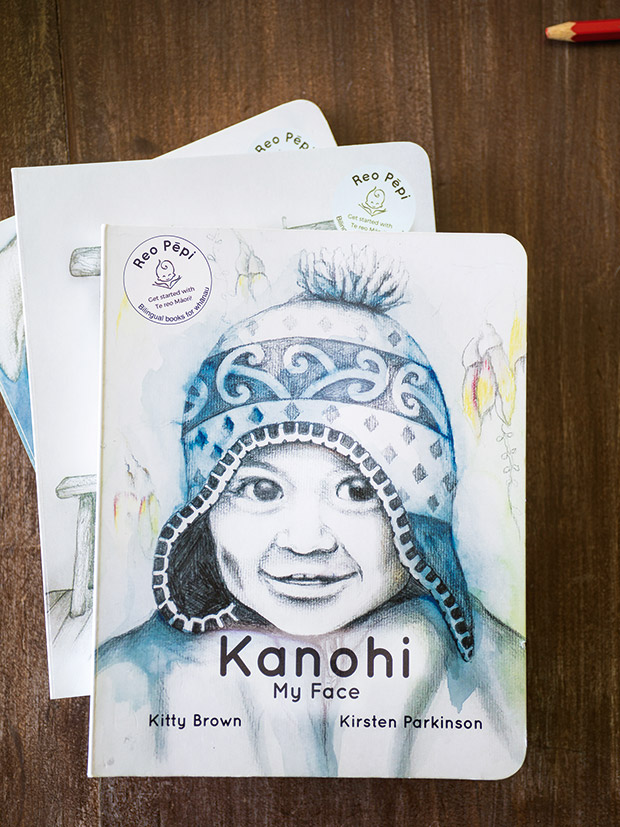 Toru, the latest three-book set of Reo Pēpi, takes these skills a step further with simple pronoun use, introductions, feelings and actions. Reo Pēpi books and sets are available at PaperPlus, the Warehouse and bookstores nationwide. 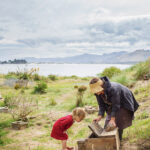 Every evening kororā (little blue penguins) can be seen waddling up from the beach to their seaside burrows at Pukekura. 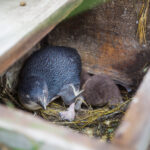 A nightly tour of the colony (bluepenguins.co.nz) helps support the kaitiaki (guardian) work of the Pukekura Trust, a joint venture between Korako Karetai Trust (Kitty and Kirsten’s whānau) and the Otago Peninsula Trust.

Start early. According to Kitty, brain connections that form the foundation of language are formed in the first 1000 days of a child’s life.

Be gentle with yourself. Don’t worry if you say a word in English before formulating what you want to say in te reo Māori. Children will hear the English first but, more importantly, they’ll grow used to hearing te reo Māori.

Embrace books. Reading aloud to children is a gift in all languages.

Mix it up. Use a combination of karakia (ritual chants or prayers), waiata (songs) and kupu (words) in the home.