Two weddings and a Land Rover 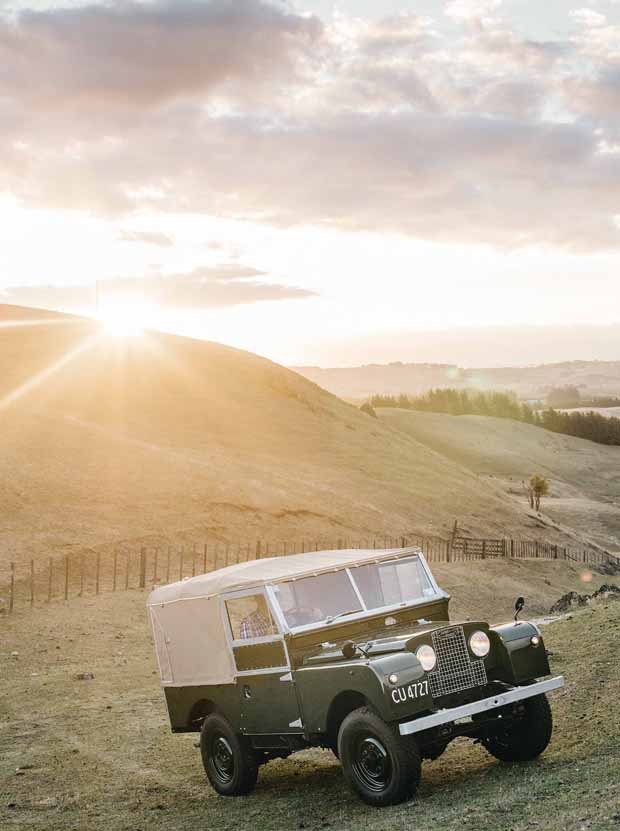 Romance has fulled the revival of a family’s much-loved 60-year-old Land Rover.

IT WAS COLD at night in Hawke’s Bay farmer Johnny Macphee’s workshop during the winter of 2012. But the lighting was good, the task at hand absorbing and the time frame pressing. “When our daughter Olivia became engaged she asked if she could be driven to her wedding on the farm in our old family Land Rover,” says Johnny. 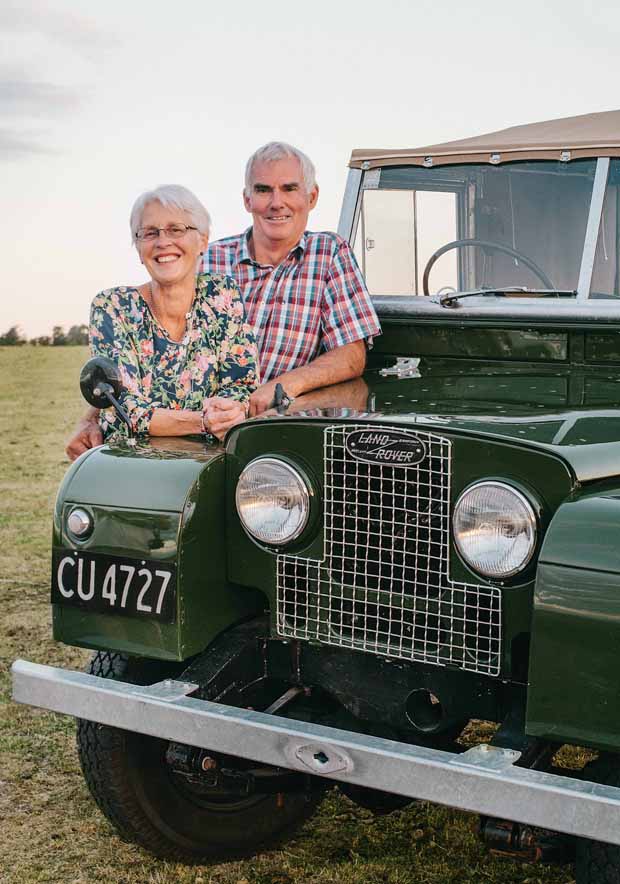 In the kitchen at the Macphee home in the picturesque hills above the Raukawa Valley, Olivia explains: “Grandpa had passed away and having the Land Rover at our wedding was like having a little bit of him present with us on the day. It was part of him.”

A wonderful and well-received request, it had one teensy snag. The Series I Land Rover – assembled at Rover Company’s HQ in Solihull then shipped down under – had been bought new by Olivia’s great-grandfather in 1955. Having served more than 30 years on and off the farm, it was retired from service in the late 1980s and given light duties until it was parked in a shed in 2008. “A new battery and lead petrol would have seen it up and running but it was filled with No8 wire and clobber, including bits that had dropped off. It was rugged.” 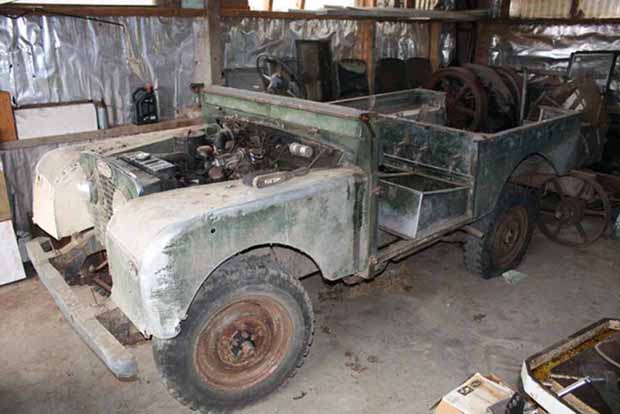 Rough and rugged is precisely where the great Land Rover surprise-package story begins. In austere post-war Britain severe shortages of commodities from food to cars stymied the country’s recovery and a scarcity of vehicles saw demobbed military machines make their way into civilian hands. Such was the case of Rover’s chief engineer, Maurice Wilks, who was enthralled by the on- and off-road handling of his American Willys Jeep at his Welsh estate. Wilks mooted a basic British-built aluminium-bodied version as a stopgap measure to boost Rover’s flagging coffers and assist the nation’s farmers. Could he have anticipated the titanic success of the simple 4X4 Land Rover with a rudimentary alloy-panelled body mounted on a box-section chassis?

More stories you might like:
This family’s 4ha market garden is taking off thanks to their fresher-than-fresh veggie boxes 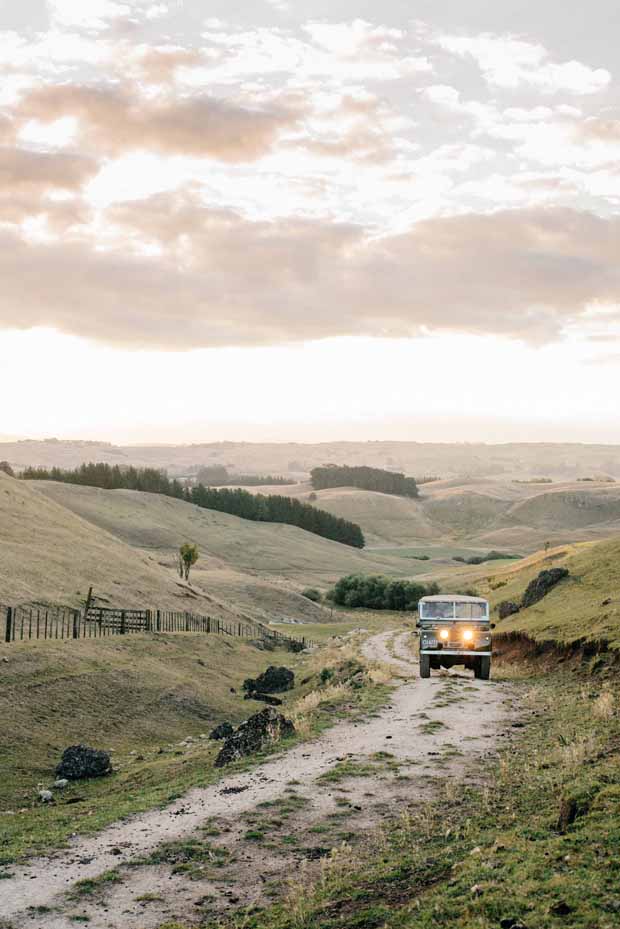 “We really lived our life in it,” says Johnny. “Mum and dad didn’t have another car so it took us to school, to town on Fridays and up to Thames to visit mum’s family when the Napier-Taupo Road wasn’t sealed and we’d be covered in dust. In the school holidays we sat in the back, often with a few sheep on board.

“It’s been a huge part of our own children’s lives too. Everyone learned to drive in it. Later in life, dad’s eyesight wasn’t great and he had an affection for gateposts – the body work left a lot to be desired.” 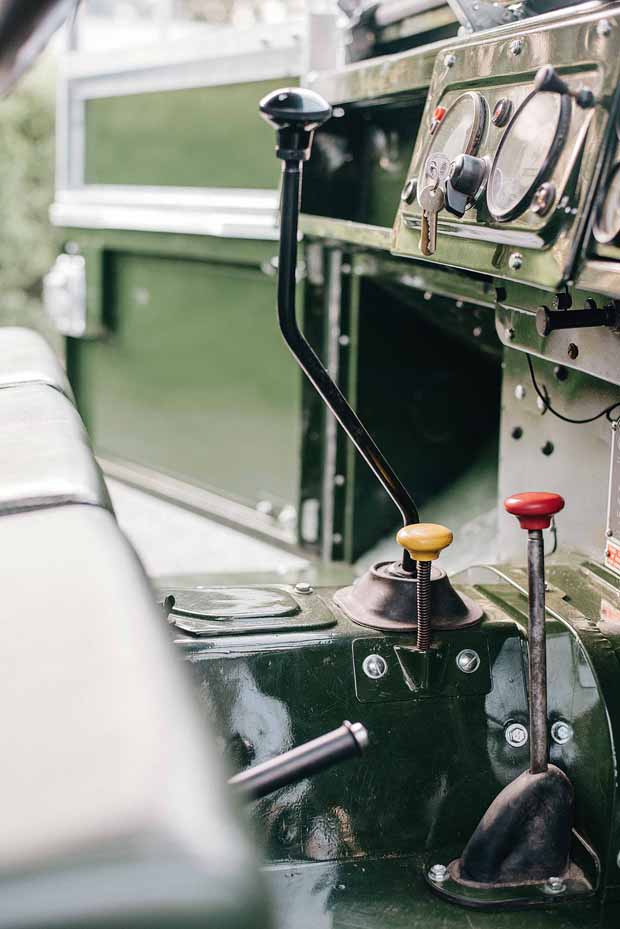 A self-taught welder and mechanically-minded man, Johnny had envisaged one day he’d rebuild it. Olivia’s nuptials were a catalyst. Son James and Johnny’s father-in-law, George Sly, visiting from England – a fellow farmer and Land Rover fan – took out the engine and stripped the chassis. “And then both of them disappeared,” laments Johnny. The winter set in and wife Sue’s scepticism grew.

“Initially I thought, this is a breeze, I have plenty of time. I bought another Land Rover as a donor and started from scratch. I sandblasted and rebuilt the axles and chassis and sourced mechanical bits from John Craddock in Staffordshire – it bought all the Land Rover parts when Rover was sold to Leyland in 1968 and everything was sent to us in its original 1950s paper and boxes. But Sue was right… I ran out of time.” 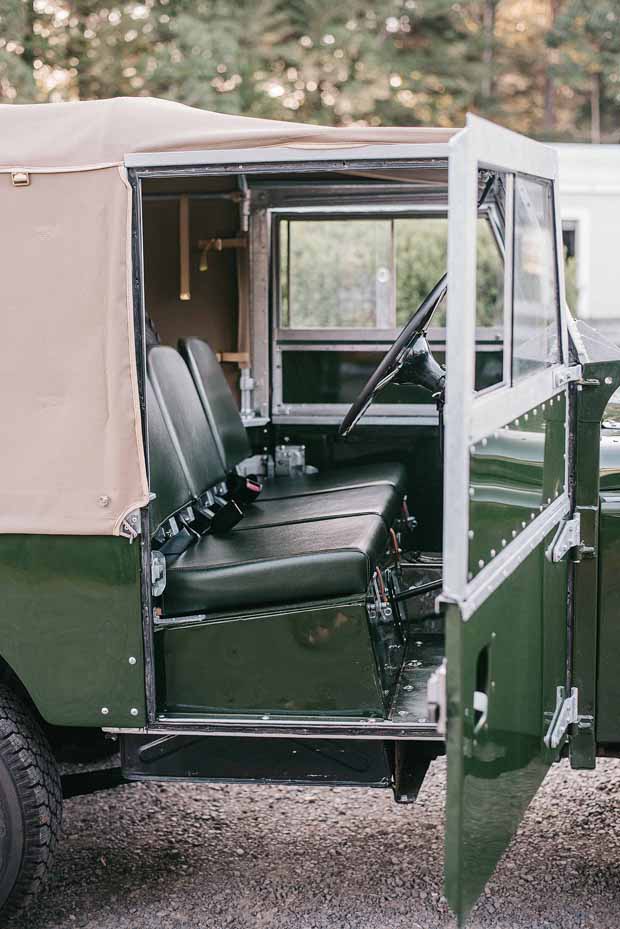 On Olivia’s wedding day in January 2013 the Land Rover played its part with aplomb but was far from registrable. “Mechanically it was A1 but its body work was dubious – pretty rustic actually,” says Johnny. “And after the wedding I parked it back in the shed, did some farming again and it wasn’t used much.”

That was until 29-year-old son James came up with a request. Could the Land Rover be the No1 car at his Wanaka wedding in January 2016? In August last year the lights were back on in the workshop and the Land Rover project resumed. There was double-whammy pressure – the refurbishment of the 60-year-old Land Rover and a delivery date down south.“Nothing was going to be half pie, but keeping its originality was the aim,” says Johnny. 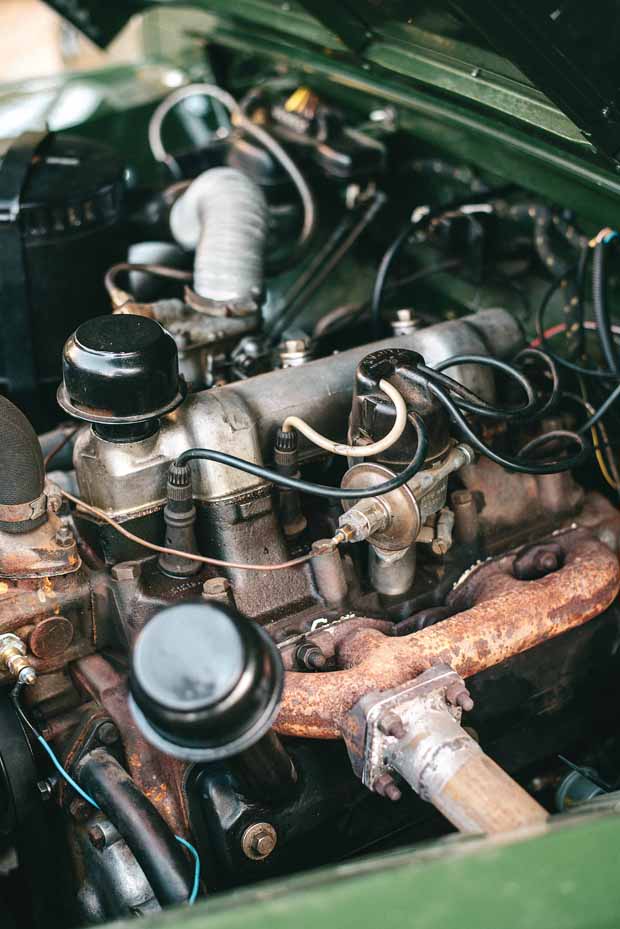 He dismantled the Land Rover. Bolts and fittings were re-plated, metal componentry re-galvanized, the body went into town for repairs and repainting and extra items were couriered across the world from Craddock’s, including a new canvas hood. Sue’s parents – George and Claire, returning for James’ wedding – were asked to tuck a rear-vision mirror and a distributor cap in their suitcase.

Three weeks before Christmas, the LVVTA (Low Volume Vehicle Technical Association) ruled that the Land Rover required seat belts. Johnny broke out in a sweat. “I designed the mounts. Every place in town closed. By mid-January I was wringing my hands. My design wasn’t to code. I modified it, built the anchor points, drove to the LVVTA offices in Porirua and warranted and registered the Land Rover en route to the South Island.”

Bobbing along Whakapirau Road adjacent to the Macphees’ sheep and beef farm, Johnny is describing the Land Rover’s road trip of a lifetime. “It has radial tyres on it which are quieter than its mud grips and we sat nicely at 65 kilometres an hour, pulling over to let the traffic past. There were a couple of misfires and we lost five litres of oil between Blenheim and Wanaka, so that needed fixing. But other than a horrendous noise up on the Crown Range one day when a nut worked loose, and leaking a bit of oil on the bride’s parents’ lawn, all was good.” 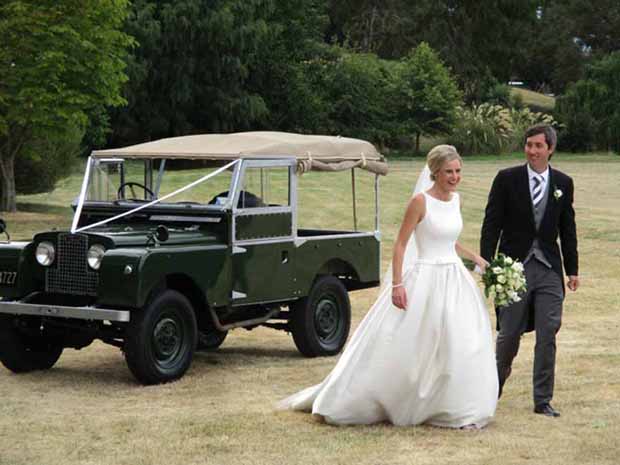 Charlotte and James arrive at their wedding reception at Charlotte’s family home in Wanaka.

By coincidence on the very day the beloved set of Macphee family wheels pulled up outside St Columba’s Anglican Church in Wanaka, the last ever 4X4 Land Rover Defender was rolling off the production line in the West Midlands – the end of a mammoth 70-year manufacturing run. Understandably, it was the last thing on the bridegroom’s mind. “On the drive south James and I had discussed that the door catches were a bit greasy and he must be really careful that Charlotte’s wedding dress didn’t get anywhere near them.” Mission accomplished.