Under the Fijian sun: A long-distance marriage makes room for chasing waves and running yacht charters 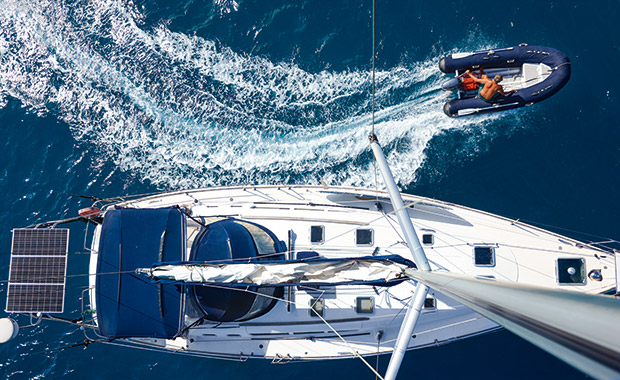 He lives in Fiji running yacht charters. She lives in Auckland with the kids. It’s a long-distance lifestyle that takes a boatload of love, trust, and passion for the Pacific.

Steele Jones has all the tell-tale symptoms. Toffee-coloured skin, salty hair, a compulsion for steering life towards the tropics. His wife Rachael leans in, whispering as if to conceal her husband’s greatest secret.

“I always tell people he’s an addict,” she says. “Steele has an addiction to surfing.”

He got “bit by the bug” while at intermediate school in the Bay of Plenty; decades later, surfing still permeates his lifestyle. The Joneses’ Fijian business, Safari Charters, allows Steele to experience paradise – in boat form. He skippers their 15-metre charter yacht for romantic getaways and surfing expeditions around nearby islands while enjoying year-round sunshine (and surf) living in the resort town of Nadi. 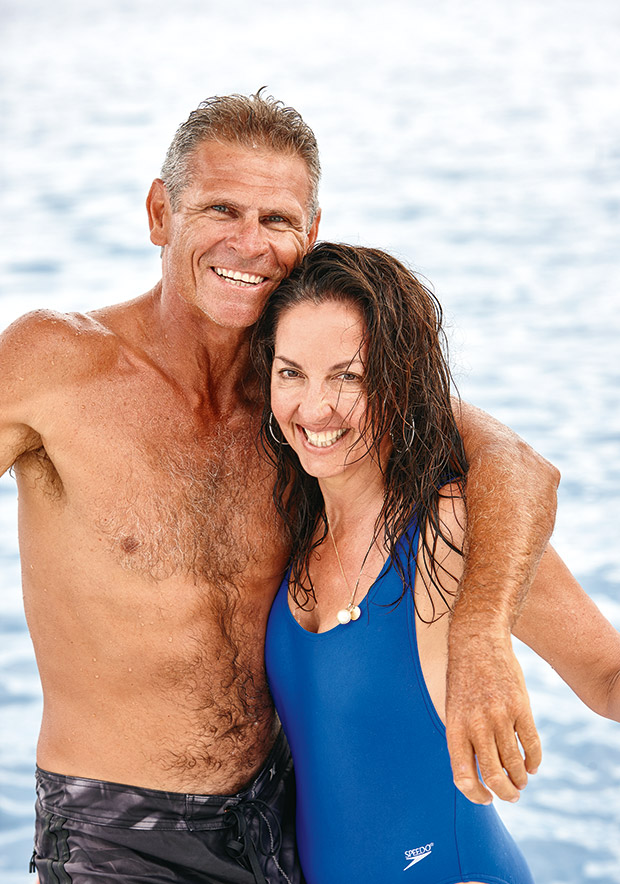 Steele Jones and his wife Rachael need to hop on a plane to spend time with each other. When it’s Rachael turn to make the commute, Steele usually takes a break from their business, Safari Charters, so they can have their yacht, Stellar, to themselves.

But this picture is far from a couple living harmoniously in paradise. Rachael is based 2135 kilometres away in their North Shore home with their kids. “People think my wife is imaginary,” says Steele.

It’s been four years since the Joneses lived in Fiji together. Four years since the turquoise-tinted weekend getaways, with Steele and Rachael running back-to-back charters together, their sunkissed tots (Stella and Max) hopping from the salty sea to chlorinated pools. After a decade in Fiji, the toddlers had become teenagers. Rachael returned to Auckland (their hometown) with the children so they could go to high school here. Steele stayed in Fiji to run the business.

“Not many families can do what we do, but Steele needs to be in Fiji for his surfing,” says Rachael. “He’s never really content unless he has the perfect wave.” 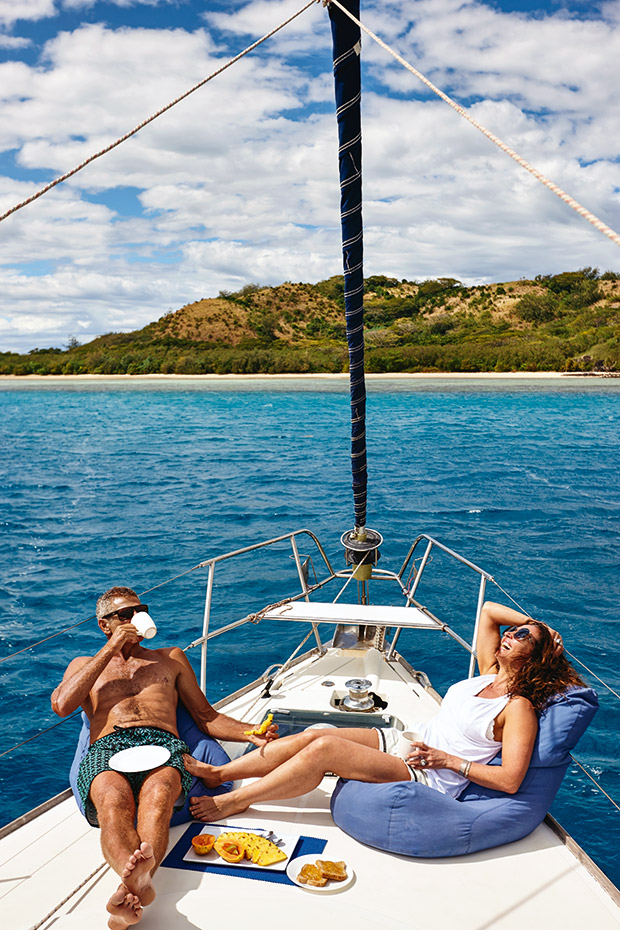 At one of their favourite spots — Musket Cove, on the western coast of Malolo Lailai Island. “There are moments when we butt heads after reuniting because we each have our routines,” says Rachael. “But we’re fine after a few days. Little rules help. For example, when one of us cooks, the other is most definitely not allowed to interfere.”

The Joneses moved from Takapuna to Fiji in 2005. Steele had spent his 20s chasing surf around the world, stopping in New Zealand for a job opportunity with his parents’ pharmaceutical company, Multichem. The job required frequent travel to the Pacific Islands and later evolved into a two-year contract in Fiji.

Pragmatically, this meant a steady paycheck. In Steele’s eyes, it meant waves. “Of course I jumped at it,” he says. “The job meant good surfing at my doorstep.”

After moving to Fiji, life became everything one could imagine just south of the equator. Steele surfed on the weekends and, between business meetings, Rachael golfed and spent time with the children. The kids enjoyed a Fijian sense of freedom that included swimming, kid’s clubs, and roaming between the homes of expatriate friends. The same could be said for Rachael and Steele. Trips can be as short as four days or as long as two weeks. Safari Charters offers snorkeling, surfing, scuba-diving and stand-up paddleboarding (SUP) but, thanks to Steele’s extensive knowledge of Fijian swells, surfing is the reason for about half the trips.

“You feel a lot younger in Fiji. You could call it never-never land,” says Rachael, who credits her better golfing days to the Fijian sun. “And if you’re lucky enough to have a boat, you can pack a picnic with some drinks, and off you go snorkeling. I never get sick of doing that on the weekends.”

But after two years of balmy breezes and endless swimming, Rachael was ready to return to New Zealand. With Steele’s contract up, it was time to move home.

That is until Safari Charters threw a spanner in the works. Its owner wanted a business partner; Steele wanted to remain in Fiji. “I didn’t want to return to the real world. I wanted to carry on surfing. I was grasping at straws for what to do with my life,” he says. The business was Steele’s chance to retire the briefcase and turn surfing into a profitable lifestyle. He was sold – particularly on the part where they’d buy a bigger yacht in the Caribbean and sail it back across the Pacific.

Their new yacht was named Stellar. The 49.4-foot (about 15 metres) 2005 Sun Odyssey 49 came with four cabins and a spacious saloon for maritime chatter. Steele and some mates began the voyage in the Caribbean, sailing past Central America and across the Pacific to Stellar’s new home in Fiji. Forever possessed by waves, the men fed their addiction with surf in tropical destinations (the Galápagos Islands and Panamá, to name a few) along the way.

More stories you might like:
Meet the 'Makaracarpas': The Mākara locals who braved the winter months to clean up their waterways

“That voyage was supposed to take three months,” says Rachael. “It took about six.” “We probably lost focus on the task at hand,” says Steele. “I don’t know why we weren’t straightforward with our intentions to take a bit longer. Rachael wasn’t happy with me taking
that long.”

That’s not to say his wife didn’t enjoy taking the helm of Safari Charters upon their return, at least figuratively. Within a year, the Joneses acquired full ownership of the company so they could run it as they had dreamed. “I wanted guests to feel as if nobody else had been on the boat as soon as they stepped onto Stellar. This was their boat to enjoy,” says Rachael. The Joneses will be the first to admit they weren’t charter experts in the beginning. But their Fijian lifestyle was something tourists craved – snorkeling in the nearby Yasawa and Mamanuca Islands, stand-up paddleboarding at sunset, and access to secluded surfing spots (for those with the “addiction”). Rachael made sure Stellar was provisioned and sparkling, while Steele expanded on his water expertise as the boat’s skipper.

“We could really crank out charters back then,” says Steele. “We ran them back to back.”

The charters slowed down once Rachael and the kids left Fiji. Today, the frequency of charters ebbs and flows with Steele’s mood, surf swells and trips back to Auckland. 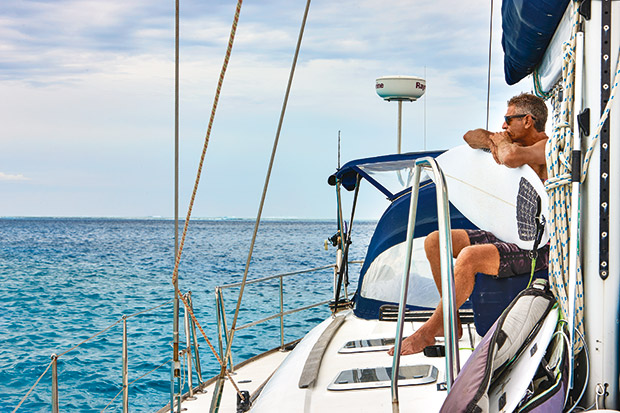 “I used to do charters six weeks straight, but it puts too much strain on us. People think a one-week charter isn’t much, but things such as survey and maintenance take time. The business is now more of a lifestyle – I run it to have fun and make it worthwhile,” he says.

Steele looks at peace as he stands on the edge of Stellar watching his American guests glide across the water on stand-up paddleboards. Crystal-clear water and warm weather never get old, but it would be even better with Rachael by his side.

“I’m much happier knowing I’m going home to Rachael after a charter,” he says. “I don’t appreciate Fiji as much as I should. It would be better with someone to share it with.” Because the water is so clear in Fiji, tropical fish (and sometimes dolphins) are visible beneath the paddleboards.

“Many people can’t get their heads around our lifestyle. We have a huge amount of trust and respect for each other,” says Rachael. “You don’t have to live with a person day in and day out to say that you have a good marriage.”

That ocean-wide gap is about to disappear now that Stella and Max have finished high school. After four years of juggling motherhood, visiting Steele in Fiji and managing AUT Millennium’s swim school, Rachael is ready for never-never land once more. “I’m definitely moving back to Fiji. Steele and I can’t continue commuting as we move on to our later years.” A day in paradise ends at the cockpit table, which can seat up to six people.

Rachael jokes that anyone living in Fiji needs to leave every few months: “Otherwise, you just go a bit nuts.” While Steele now has a Fijian passport, she’ll move with a tourist visa for built-in visits to New Zealand.

“A lot of dreamers come to Fiji. I don’t know if it’s alcohol or the weather, but people lose touch with reality.

“We are realists. We’ve been in Fiji long enough to know that success requires hard work and realistic expectations. You don’t move to Fiji to make huge amounts of money.” Before a charter, Steele stocks up on fresh fish, fruit and vegetables from the Nadi markets for Eroni, Safari Charters’ onboard chef. Homemade coconut milk is a guest favourite and an essential ingredient for Eroni’s speciality, Fijian fish curry.

Steele and Rachael certainly know how to have fun, too. Once reunited in Fiji, the couple has plenty of catching up to do – four years of snorkeling, surfing and golfing to make up for lost time.

“This is a great lifestyle if you get the balance right,” says Steele. “I’m lucky to have a wife who encourages me to do it.” 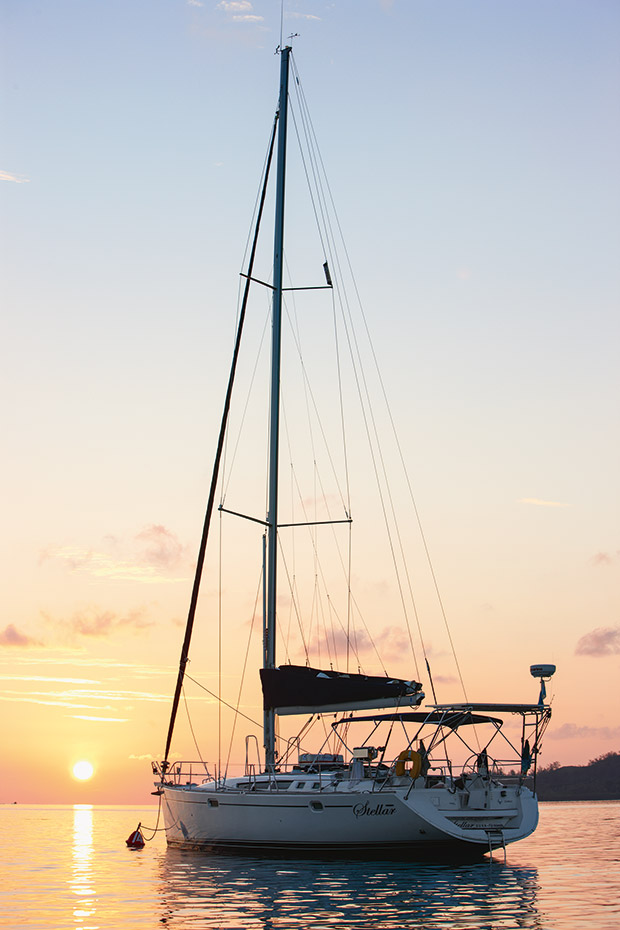 Drinking: “Strawberry or pineapple margaritas. We make them with seasonal fruit, ice, good-quality tequila and a spice mix we found in México called tajin. It’s a combination of lime, salt and chilli for the rim of the glass.”

Cooking: “Fresh tacos from a cooking class we took in México. Mexican food is huge in our household. Steele is a fabulous cook. He could spend all day thinking about what he’s going to prepare. It’s a whole-day excursion for him, so you dare not say you don’t like it,” says Rachael.

Reading: “The Seven Sisters series by Lucinda Riley,” says Rachael. “There are seven books, each about one of seven adopted sisters.”

Visiting: “Pauanui in the Coromandel. We’ll stay at Rachael’s sister’s beachfront house. Otherwise, this holiday season we’ll be in Auckland which will make me go a bit crazy,” says Steele. “He is happy for about three days when he visits New Zealand — then he’s walking around in circles. He’s painted the house a couple of times,” says Rachael.