Lisa Scott wears her gravel rash as a badge of honour after testing her skills at Queenstown MTB (Mountain Bike) Park.

“We get all sorts,” said Mat at Bikeaholic, kitting me out for a day of downhill at Queenstown MTB (mountain bike) park. Wearing white plastic Imperial Stormtrooper-style shin guards, a full-face helmet, gloves and elbow pads, I looked like what I was, a noob. The elbow pads were a bit clunky, so I took them off. Mat raised an eyebrow but made no comment, downhill biking is a sport where the fault’s your own, Horatio.

“We see snot; we see tears, we have people who rent a bike and then call us 10 minutes later from the top, asking us to come and get them. We just laugh and hang up.”

The sun was shining, the lake was deep and blue, and I was rising skyward in a gondola with my bike hooked on the front. Yes, I’d ridden a bike before, yes, I’d ridden one down a hill. No, that is not the same as downhill biking.

Luckily Queenstown MTB park has a variety of trails to suit everyone- from hardcore speed demons to first-timers looking for a bit of wheel-assisted freefalling. The trails were built by locals years before downhill mountain biking took off as a tourist attraction and long before before anyone cared about consents and permission. Some of them are still a bit (hurl you) off-the-beaten track … particularly those carved into the steep rocky face of Ben Lomond – they’re more goat track than anything.

A child so small his teeny bike rode inside the gondola with him passed me going down as I went up. Pah! If he could do it…
An expert rider, Dudley ‘Pickle’ Grinder*, accompanied me. “These brakes are really serious,” he said, in between doing jumps off stumps and humps.“They’re not like the brakes on your old Raleigh 20. Just lightly rest one finger above them.”
“Uh-huh,” I said. 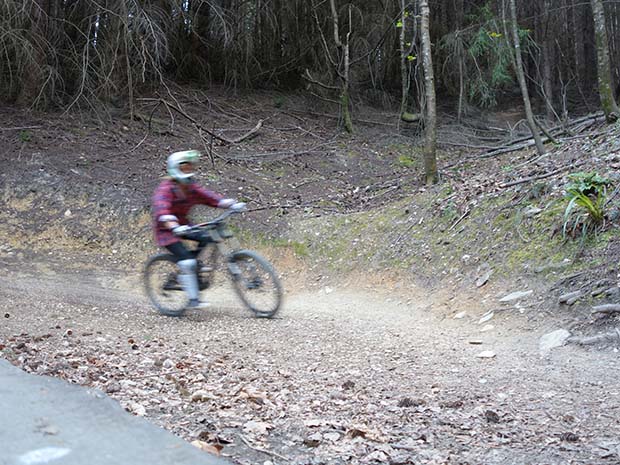 Hammy’s is the easiest track, known as a smooth highway, 6km long from top to bottom, averaging about a 6% grade. The panoramic views of Queenstown glimpsed through the pine, native bush and beech forest only served to remind me how high I was, that if I was a bird I could fly out over the lake but I’m not a bird so instead I took in the ground: ‘gripped,’ as the mountain bikers say (holding on for dear life, like you’re in the passenger seat and your mother is driving).

“The key is to empty your mind and let the bike take you down,” said Pickle.
“Empty your mind,” I repeated. “Empty…” the trail suddenly seemed to get steeper. I jammed on the brakes and somersaulted over the handlebars, hitting the deck harder than an old lady on a cruise ship.

Twenty-six kilograms of bicycle bounced off me, donk – but I didn’t feel a thing because I was having an epiphany (epiphany/head injury, you say tomato): downhill biking is a metaphor for life, all you can do is hold on and enjoy the ride. As with life, sometimes you’re safer to commit to something than worry about it too much.

Also, uptight over-thinking stress monsters will eventually crash. There were obviously deeper psychological elements at play here. It’s clear I have trouble letting go, even as I went over the handlebars I clung to them like a baby monkey. And as for emptying my mind, while cartwheeling, blue sky, brown ground, blue sky, I remember thinking, “This isn’t going to end well.” 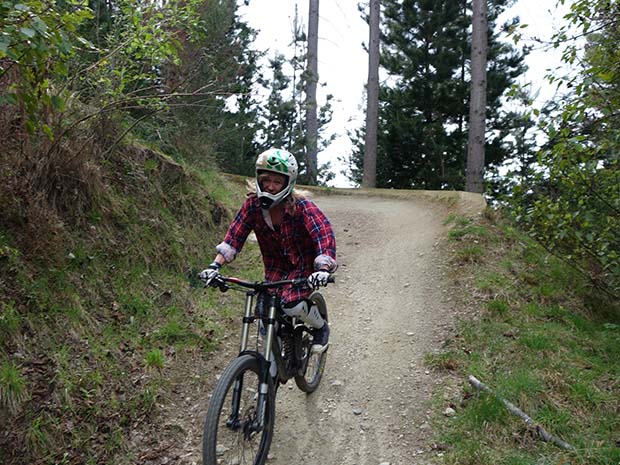 “I wish I’d had a chest-mounted GoPro to capture that,” said Dudley from behind. “Was it funny?” I asked. “It’s never funny when someone eats dirt,” he said. I had actually eaten some, just like when I when pregnant and ate clay, but I’d wanted to do that.

My second run was as you’d expect. Nervous, shaky. By the third, I was doing much better, letting my trusty stead have its way, trying to be Zen, even though, inside my helmet, I was breathing as heavily as 5:2 dieter in a cake shop on a fast day.

The berms are designed to guide you round; you’re not supposed to teeter into them, trembling, a lack of momentum causing the bike to fall over, pinning you to the ground. Alerted by my muffled squeak, Dudley returned. 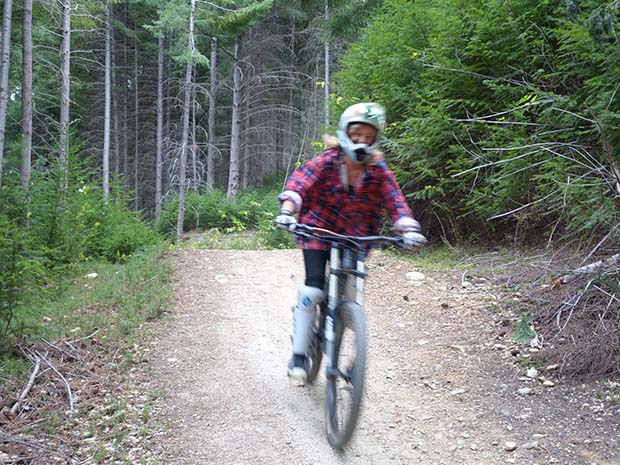 “Don’t look at the corner! Look through the corner to where you’re going. Feet on the pedals in the attack position (9 and 3 o’clock, if you have one leg lower than the other you’ll get snagged on something), lean back behind your seat a little. Get off your brakes! Off your brakes!!! Speed defies gravity.”

After yelling non-stop for three hours, when I came around the last corner pushing the bike instead of riding it, he stopped speaking to me. 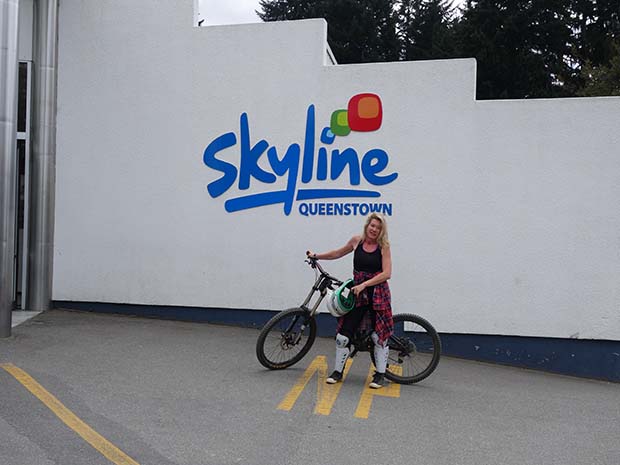 My elbow was bleeding. I had track rash down my forearm. I tilted it towards all on comers, like the newly engaged showing off a diamond ring. Returning the bike, “Look! I came off!” I shouted to Mat, giddy with the less ordinariness of my life. He just shrugged, what did you expect? The adrenaline rush lasted until 10.30pm when I ran out of people to tell and fell asleep like falling off a cliff.

*not his real name.

More stories you might like:
Family and friendships formed on the Tora Coastal Walk
Discuss This Article