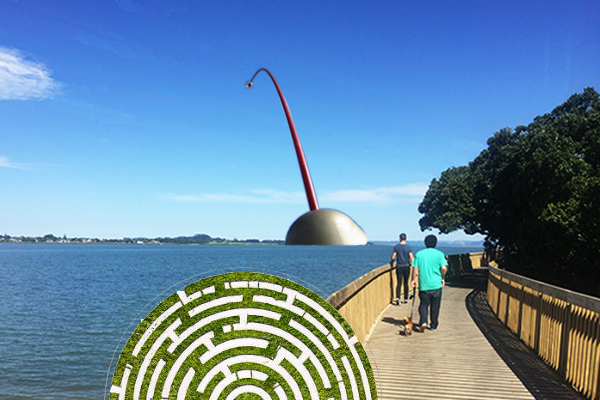 This week in the water cooler: Cheree gets lost in the maze of S Town, Emma strolls along the prom, Milla gets kinetic and Nadene has a full plate. 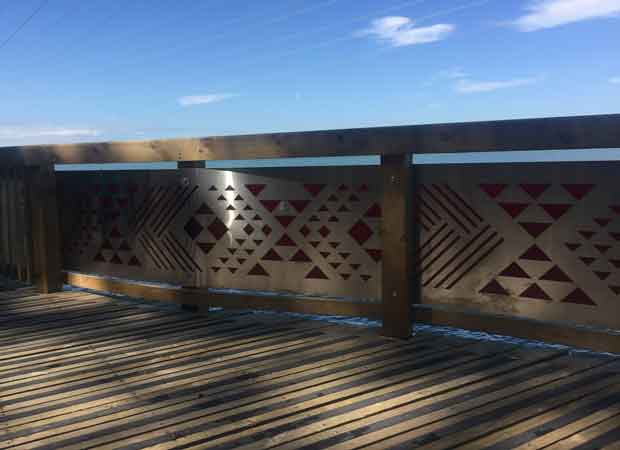 An artwork along the Waikowhai Walkway

Auckland is teaming with weekend walking spots, but when the weather gets wetter (as it inevitably does) one of the city’s newest walks will keep your shoes dry and out of the bog.
The new Waikowhai Boardwalk adds a touch of pomp and circumstance to Auckland’s Manukau coastline. Stage One of the dual walkway and cycleway links Onehunga’s new reclaimed beach development, the Taumanu Reserve, to Bamfield Place in Hillsborough.

When completed, the path will reach all the way to Blockhouse Bay. There’s always been a pathway that traverses the northern shore of the Manukau Harbour but it can only be done safely two hours before or after the daily low tides. 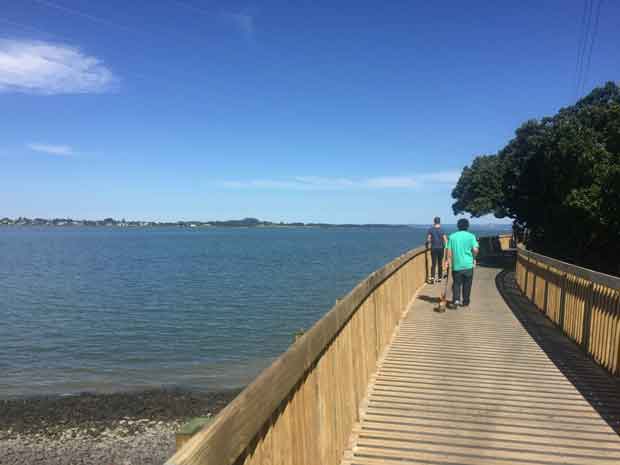 The coastline is dotted with secret coves, volcanic rocks and native bush, and beautiful views of Mangere Mountain and Puketutu Island.
The Manukau Harbour was once Auckland’s main port, but when business interests shifted to the Waitemata Harbour, the harbour suffered years of neglect with a sewage plant and freezing works polluting the water and a state highway bulldozing the original Onehunga beach.

It’s heartening to see conservation efforts to clean up the waterways and coastline. This includes the Taumanu bird sanctuary which attracts 48 coastal species including international migrants the huahou (red knot) and kuaka (bar-tailed godwit), and local travelers such as oyster catchers, pied stilts and New Zealand dotterel. On our walk we spotted at least six species dining in the mudflats. 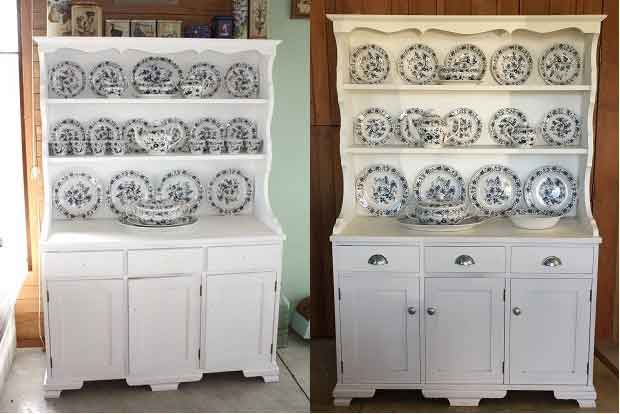 Before (left) -the day it came out of the box, note no handles on the dresser! After (right)  the set today, with the new soup tureen lid and fruit bowl (on the bottom shelf)

Early April. There’s a loud crash in the middle of the night. On the floor, shattered into the sharpest of shards, is the lid of a soup tureen and a large fruit bowl.
They were part of a dinner set bought about 40 years ago and lugged by my grandmother in a very heavy brown box all the way back from Japan. Unfortunately it did not contain the trendy, cream with bamboo Noritake dinner set my mother had carefully saved up for, but a very traditional blue and white porcelain set by a company called Nikko.
When my mother saw the first flash of blue and white, she closed the box and pushed it into a cupboard.
One of my favourite things to do as a child was to go under the stairs, open the box and marvel at the lid of the soup tureen, the piece my mother had partially unwrapped years before, It was like finding buried treasure in your own house. At some point my mum promised it to me.
Fast-forward 30+ years. A manky $20 Trade Me dresser is painted in white and the dinner set finally comes out of its box. You can’t see it on the picture I took that day (left) but I used sticky adhesives to keep everything in place, in case a cat decided it liked porcelain.
They’ve never gone near it and I got pretty complacent about making sure everything was well stuck in place. That led to a bag full of broken pieces and some regretful cracks in my heart.
However, I have since discovered something amazing. There are websites online that specialise in replacement pieces of almost every dinner set pattern you can name. My one – Ming Tree – was one of Nikko’s most popular designs, and after a bit of searching, I found the missing pieces on this US site. A brown box arrived from Missouri in record time (just eight days).
It did help me solve the mystery of why my grandmother bought Nikko, not Noritake. Even now, Noritake is very expensive. We can only guess my grandmother didn’t want to disappoint my mum, so decided to spend her money buying a complete Nikko set instead.
For her birthday one year, I finally bought my mum a Noritake dish for about the price of three dinner sets from Briscoes. She still hasn’t used it. Serial that started it for me, as it has for many podcast listeners. Until I discovered the dulcet tones of Sarah Koenig, my daily commute and dog walk had played out to soundtracks of Top 40 radio and the occasional Michael Jackson megamix.
Serial changed everything. Twenty-minute walks became 40 minutes of murder mysteries, legal jargon, and unanswered questions, like ‘What’s the deal with Jay?” When it ended I dallied with other podcasts. Some were radio shows, another was a true crime mystery, even the cringe-worthy but hilarious My Dad Wrote a Porno, but nothing lived up to the first season of Serial (the less said about Season 2 the better).
That was until S Town.
All seven episodes of S Town (short for Sh*t Town) were released on March 28, 2017 and within four days they’d been downloaded over 10 million times. I was a little late to the game. I started last week and am only up to episode three as my husband won’t let me listen without him.
S Town is hosted by journalist Brian Reed and created by the teams behind Serial and This American Life. It’s a story within a story within a story, that started with an email. In 2014, John B. McLemore from Alabama emailed Reed and implored him to investigate a local murder. He’d overheard rumours and was convinced there was a cover-up going on.
It’s impossible to say more without giving away spoilers so I’ll leave it there for now, but if you do listen, PLEASE message our Facebook page and tell me what you think!
Once I’m done with S Town I’m going to give Missing Richard Simmons a try. Filmmaker Dan Taberski was a loyal follower of Richard’s eccentric exercise classes but when Richard stopped showing up and disappeared from the public, Dan began to wonder if there was more to the story than met the eye. It’s not a whodunnit but more a ‘where’d he go?’
Looking for more podcasts? Why not give our podcast The Off Topic Book Club a try, listen here.

THE WORLD-BEATING ART OF AN ORIGINAL TARANAKI MAN 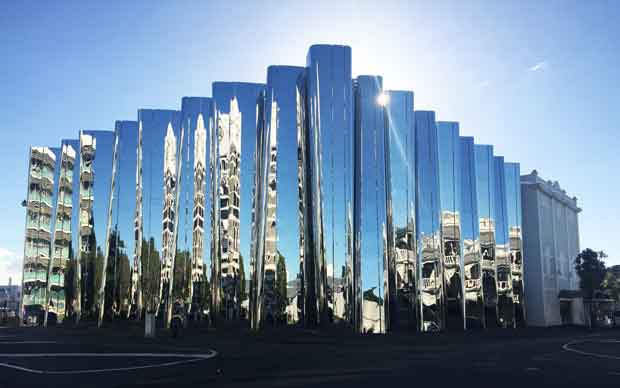 When I head off to my family home in Taranaki, I try and make the most of the free outdoor and cultural happenings in New Plymouth. This time round I had a look at the current exhibition on offer at the Len Lye Centre. 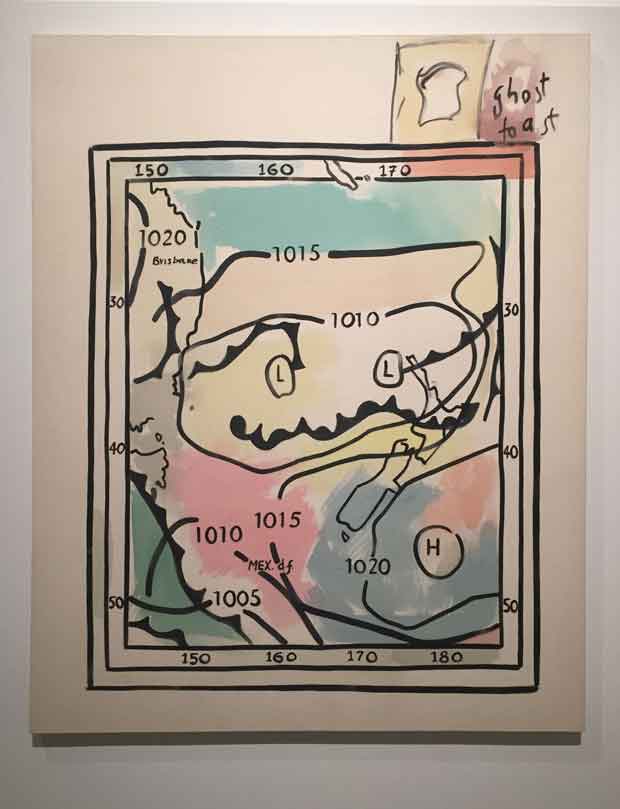 An artwork by the late New Plymouth artist, Tom Kreisler at the Len Lye Centre.

It’s amazing to think that Len Lye is considered one of the world’s foremost artists of the 20th century.
The centre opened in 2015 and is worth visiting for the architecture alone. Inside you will find artist Len’s kinetic sculptures and other contemporary artworks from the Govett Brewster collection. 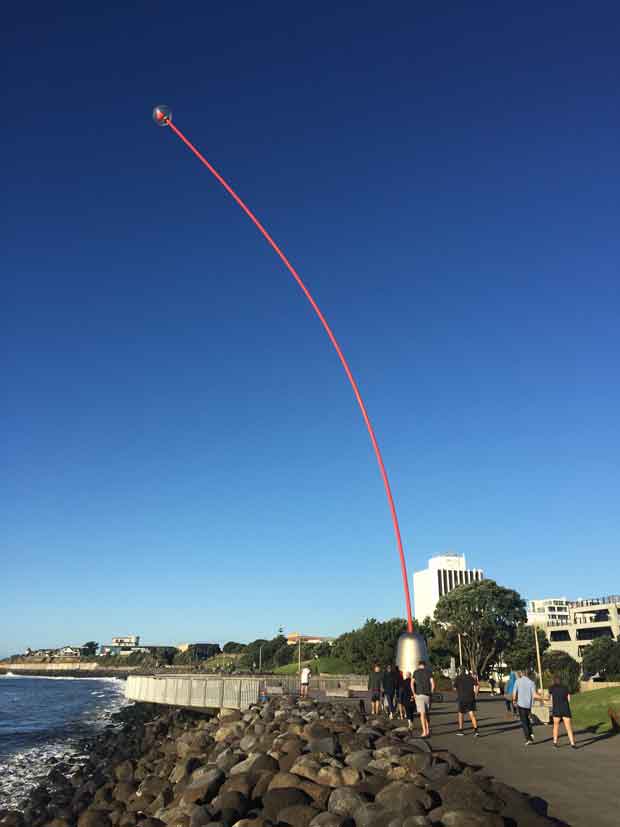 After this it’s just a hop, skip and a jump to the coastal walkway to check out another of Len’s massive swaying works, the much-loved Wind Wand.