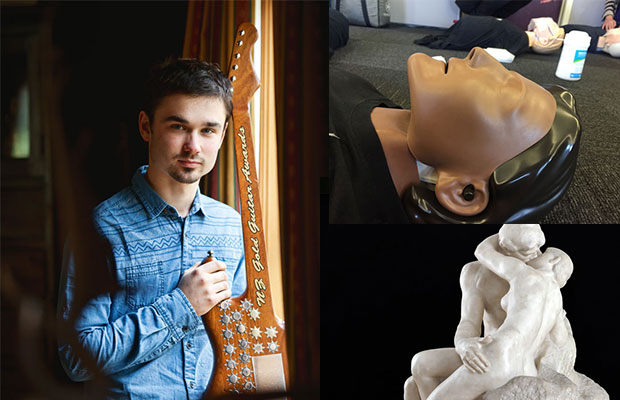 This week in the water cooler: we’re boxing clever with gluten-free baking, exploring a great body of work at the Auckland Art Gallery, saving marriages with a travel app, learning the CPR basics on a St John first aid course and listening to some sweet country sounds from rising star Cam Luxton. 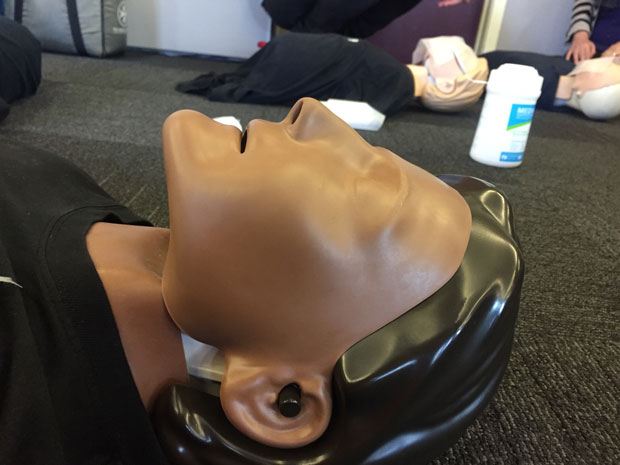 This week I got up close and personal with a short, dark and handsome man. To be more accurate, he was half a man, sculpted from plastic, and was my CPR dummy who I had to give mouth-to-mouth on while completing my Level 1 First Aid Certificate.
There were people from all walks of life learning the basics of emergency medical assistance in the one-day St John course including a female corrections officer, an office administrator, a parking warden, a supermarket manager, an architect, a plumber, and several construction workers. 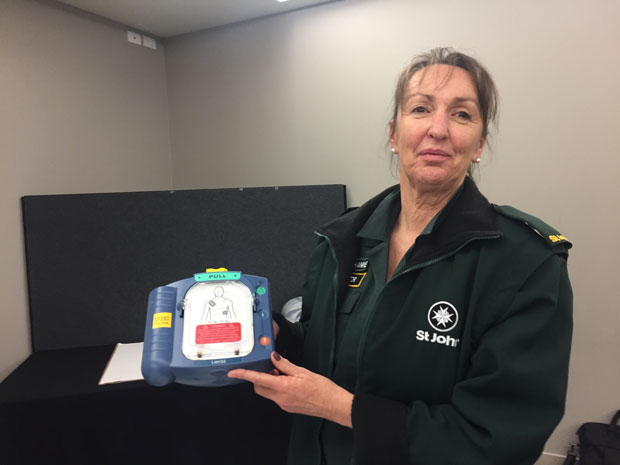 Jo was our hilarious but firm tutor and she called a spade a spade. That’s appropriate as she probably knows how to use one on her farm in Dairy Flat.
“I usually wear longer gloves when I’m with my cows,” she told us while putting on her medical gloves to demo the CPR basics. She made it look easy, sharing a few handy mottos ‘Life before limb’ and ‘Thirty to two, no matter who’, plus life support acronyms DRSABCD and AVPU (you can find out what those mean when you take a course yourself).
I had completed a first aid course about 15 years ago (where does the time go!) but had let the certificate lapse. A lot has changed on the course since the early 2000s. There are now videos to explain organ function, the course can now be completed in a day (it used to be two) and the rules of CPR itself have changed considerably.
There are three Lifestyle Magazine Group staff from our office who will be completing their first aid certificates this month, including our subscriptions manager Niki Joyce who has held a first aid certificate since 1987. While it might seem excessive to have so many first aiders in an office of just 10 people, it’s preferable to have quite a few. It’s only when you are hands-on, pumping the heart of the dummy (exhausting!), that you realise how important it would be in a real emergency to be able to take turns pumping the heart before an ambulance arrived. Doing this fantastic course might save a life. I hope I never have to use it but I’ll certainly never let my certificate lapse again.
Emma Rawson
thisNZlife editor

More stories you might like:
Autoimmune disorders: These are the common diseases, symptoms and treatments to know 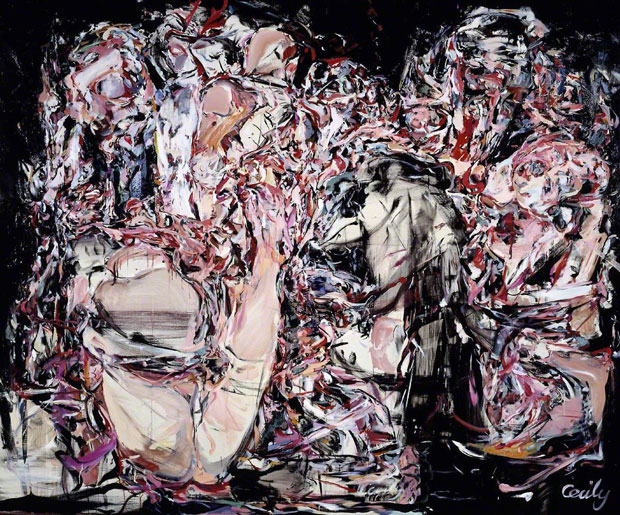 Trouble in Paradise by Cecily Brown.

If you haven’t seen The Body Laid Bare at the Auckland City Art Gallery, you’ve got until July 16 to view more than 100 works from the London’s Tate Gallery.

This exhibition is an incredible lesson in art history, exploring artists who have painted, drawn and sculpted the naked body, and how this reflected social values of different eras. It is also an opportunity to see works by famous names such as Picasso, Turner, Bonnard, Matisse, and contemporary artists such as Lucian Freud, Frances Bacon and David Hockney. The Kiss by Auguste Rodin

The 3.5-tonne marble sculpture The Kiss by Auguste Rodin has been a favourite with the public. I was taken by the textured loose paint and contrasting colours of Cecily Brown’s large painting Trouble in Paradise, the kind of painting you could imagine living with and enjoying forever.
On the day I visited the gallery foyer was buzzing as two models posed in retro underwear as a circle of artists sketched them, a wonderful way to complete the exhibition experience.
Milla Novak
Designer, NZ Life & Leisure 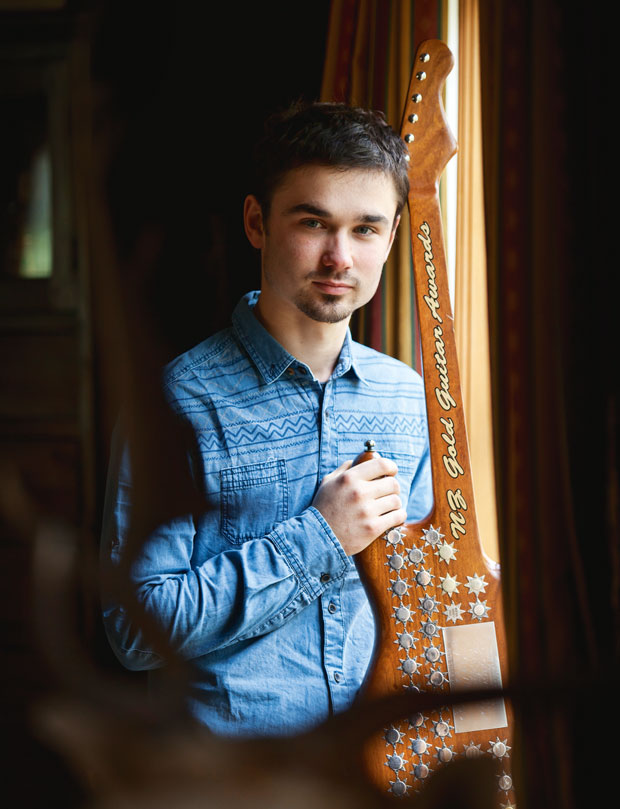 Back in September 2014 NZ Life & Leisure featured Lynda Topp (of The Topp Twins) and her wife Donna’s property ‘Topp Lodge’ in the South island’s Staveley.

At the time Donna’s son Cameron (Cam) Luxton had just won the Golden Guitar award the 2014 National Country Music Award, which took him all the way to Nashville.

The talented singer has gotten better with age and has just released his first music video for his catchy song Fire it Up. A full album will follow in early 2018 and Cam is planning to return to Nashville.
In the meantime you can catch him on stage in New Zealand at the Methven Rodeo After Party on October 22, alongside country artists Jody Direen and Kaylee Bell. Kaylee wowed the Mission Estate audience as the opening act for the Dixie Chicks back in April.

More stories you might like:
How this crafty woman transformed vintage wool blankets into a full-time hustle

Tickets for the Methven Rodeo After Party are on sale from July 14 for $35.
Yolanta Woldendorp
Art Director NZ Life & Leisure 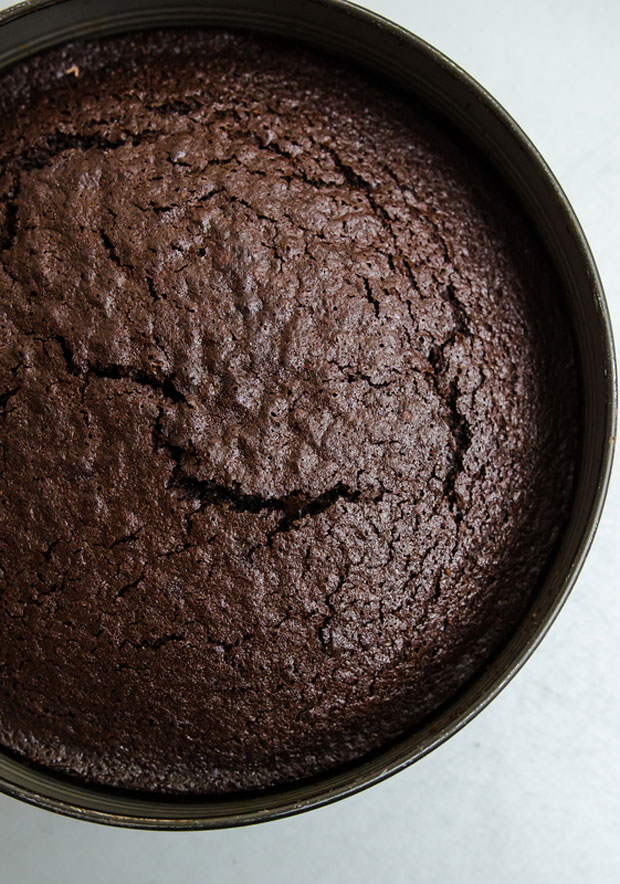 When you have a coeliac in the family, you get to try a lot of gluten-free foods.
One of the big issues for a coeliac is bread. The gluten-free bread options I’ve tried are closer to cake in terms of flavour and texture, and only last a day or so fresh. After that, you have to freeze it and eat toast.
The only gluten-free bread that was pretty close to the real thing for me – and lasts 3-4 days – is one made by artisan food producer Nicky White who runs her business from her South Auckland home.
Gluten-free cake also tends to be stodgy to my taste. So what do you do when you’re planning a child’s birthday party where some of the invited guests are gluten-free? Worse, you don’t have a lot of time to try gluten-free cake experiments?
That was the quandary for a friend the other weekend, and she did something unusual for someone who is an award-winning baker: she turned to Betty Crocker. She bought the gluten-free devil’s food cake mix ($7.50) from the supermarket which uses rice flour, with potato starch and xanthum gum for texture.
The result is a great cake. It’s light, airy, and tastes delicious, and she made a dairy-free chocolate ganache to go with it using coconut oil. It’s not your usual sickly-sweet cake, and there’s a hint of the bitter chocolate about it, but it disappeared pretty quickly, and that’s the best review for any cake.
Nadene Hall
Editor NZ Lifestyle Block

ROME IF YOU WANT TO

I’m finally back into the real world after spending five weeks traveling around Europe with my husband.
In between raving about the food, the wine, and the food again, I’ve been telling everyone I know to download the Guides by Lonely Planet app.
It wouldn’t be too much of an exaggeration to say this app saved my marriage. Instead of arguing over map reading skills or which restaurant to choose, we had everything we needed right in our hot little hands. 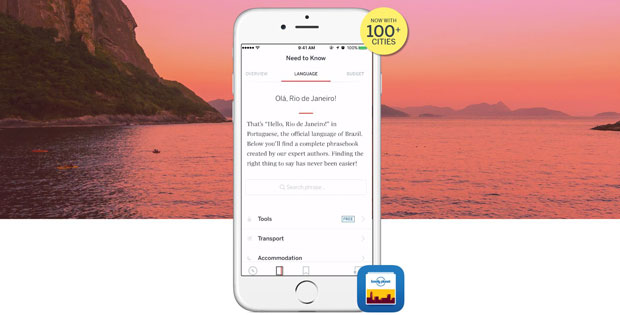 Guides by Lonely Planet is a collection of city guides from all over the world. Simply download the city you want while hooked up to WIFI (they are large files so it’s best not to do it on data) and you are sorted. It’s saved and easily accessed on your phone, no internet required.
Each city has the must-do activities, where to eat, drink, sleep and shop, and the top attractions. There’s also an offline map so you don’t need to constantly connect to WIFI or risk a huge roaming bill to find out where you are.
It’s perfect for travelers on the go. We had such limited time in each place that we didn’t want to waste a moment getting lost or eating sub-par tzatziki when there was something wonderful just around the corner. The information is up-to-date and in-depth, with opening hours, websites, directions (including nearby metro stations), and a brief history or background of each place.
It’s also great in cities like Rome or Athens where there are ancient statues or monuments with zero information. There’s no need to debate whether it’s 6th or 16th BC when Guides will be able to fill you in.
We loved that it led us to the unexpected, like the cocktail bar in Prague where the drinks came with a toothbrush and a little toothpaste tube of raspberry liqueur, and steered our attention towards little details we might have missed like the cannonball on the side of a Munich church.
Download it from the App store iTunes  or Google Play– it’s free – and go forth and adventure.