Welcome to Rockwood: A glamping retreat and train carriage are the newest arrivals to this high-country station 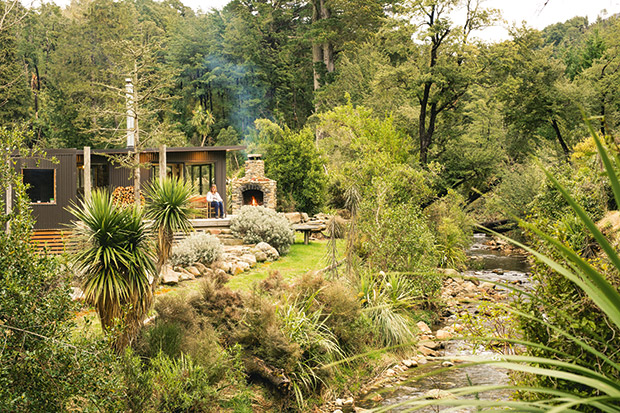 Thanks to the décor-doings of his Scottish wife, a Canterbury sheep and beef farmer now has a fancy new flock on his land — holidaymakers.

It was one man’s aversion to the sound of lambs missing their mums that propelled Ben and Cheryl Richards towards the world of hospitality. The discordant ovine choir in question is presided over by Ben, a fifth-generation sheep and beef farmer at Rockwood Station, in a tuneful-sounding settlement called Windwhistle in the Canterbury foothills.

Cheryl explains the problem: “I’d done up the old shearer’s hut. Somebody enquired about staying there, and I said, ‘Good timing — you can help in the yards with the weaning.’ The comment back was: ‘Don’t want to help. Don’t want to hear the lambs bleating for their mothers.’ They just wanted peace.” 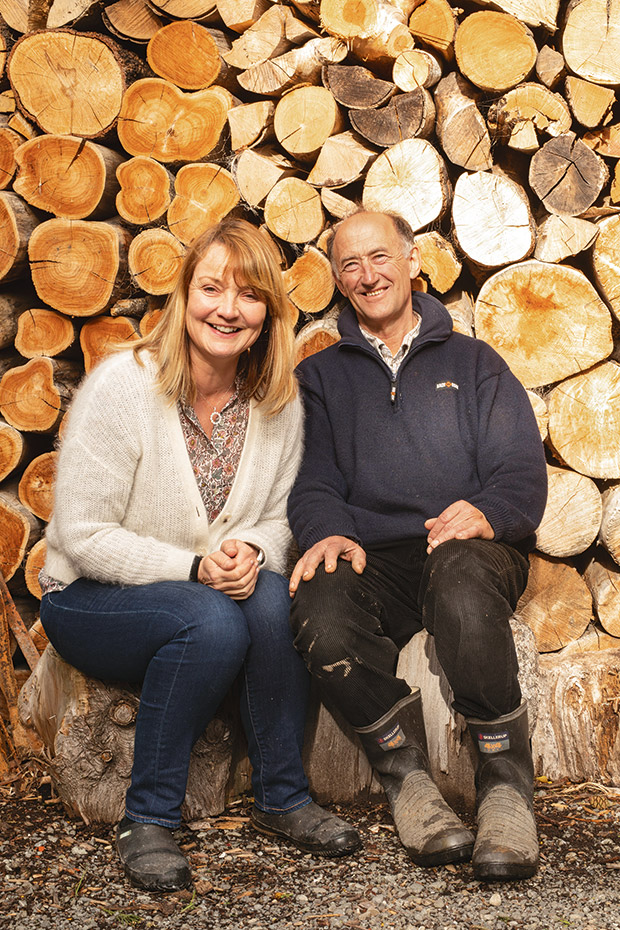 With no hope of silencing the bleaters, Cheryl came up with a more melodic alternative — another workman’s hut that she had previously shifted to an idyllic site near the stream running through their high-country station.

The hut had been languishing in a friend’s backyard. Cheryl snapped it up immediately and went home to tell Ben of her real estate triumph.

His response: “Oh God.” He thought they wouldn’t be able to get it over the river to its intended perch in one piece. But Cheryl was cup-half-full on the matter: “I said, ‘Look, if they can put a man on the moon, they can put a hut up the back of our garden.’” It did wobble wildly en route, quite like that man on the moon, but it got there. 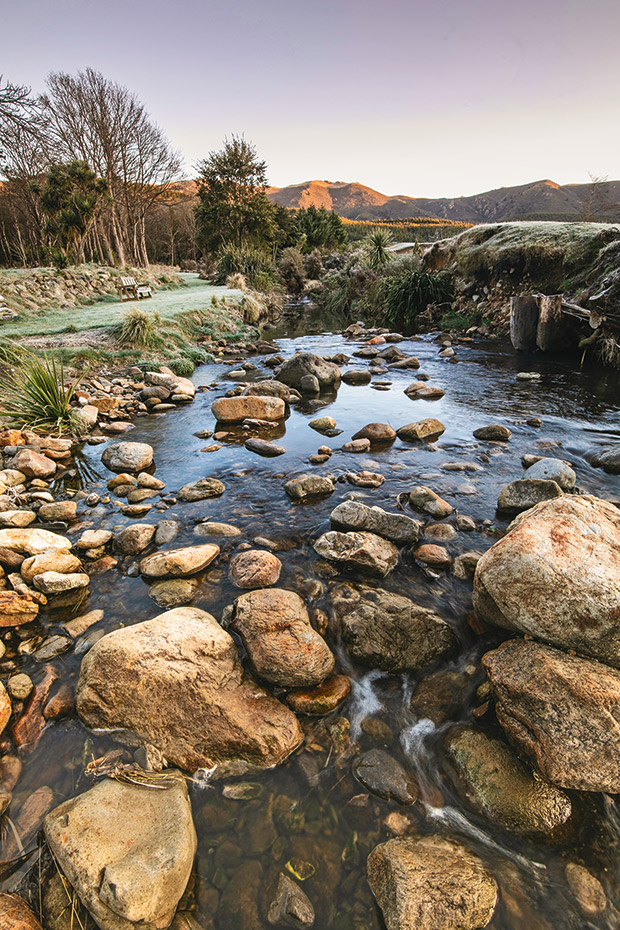 The Rockwood stream runs for 1.5 kilometres through their Canterbury property.

From this spot, there’s not so much as a whisper of fretful ruminants; rather, a classy birdsong soundtrack and the burbling of the Rockwood stream. Cheryl had not long finished sprucing up the hut when she offered it to the peace-seeking man.

After five peaceful nights there, he was so smitten that he spread the word to Canopy Camping Escapes, a New Zealand business that promotes a hand-picked selection of glamping sites. In 2018, the hut relinquished its duties as the couple’s private tipple joint and became their first hospitality venture: The Summer House. 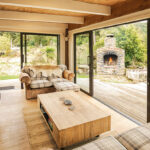 The Summer House is at the edge of the bush. 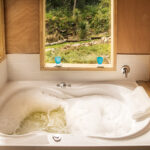 Cheryl likes to wander up here with Ben in between guest bookings and check that it’s still her favourite gin-drinking/marshmallow-toasting spot. 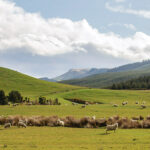 It’s not far from Ben’s ovine charges (4000 breeding sheep, including hoggets) and 145 cows. 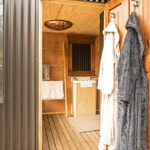 Their second site, The Carriage, was spotted by Cheryl at the bottom of an internet rabbit hole: “I found an old train carriage on Trade Me.” As to why this accountant (or as Cheryl calls herself, a “glorified bookkeeper”) would be hunting for an old piece of train: “I wasn’t, I was looking for a sofa. I don’t know how it happened — a picture just popped up.”

She thought a decommissioned 1953 goods carriage would be just the thing for another prime Rockwood bleat-free nook — one that sits parallel to the Hororata River and has views of Mount Hutt. “I showed Ben the carriage, and he said, ‘We’ll think about it.’ I said, ‘No we won’t — a thousand people are looking at it. We should go and see it now.’ Next thing we’d bought it”. 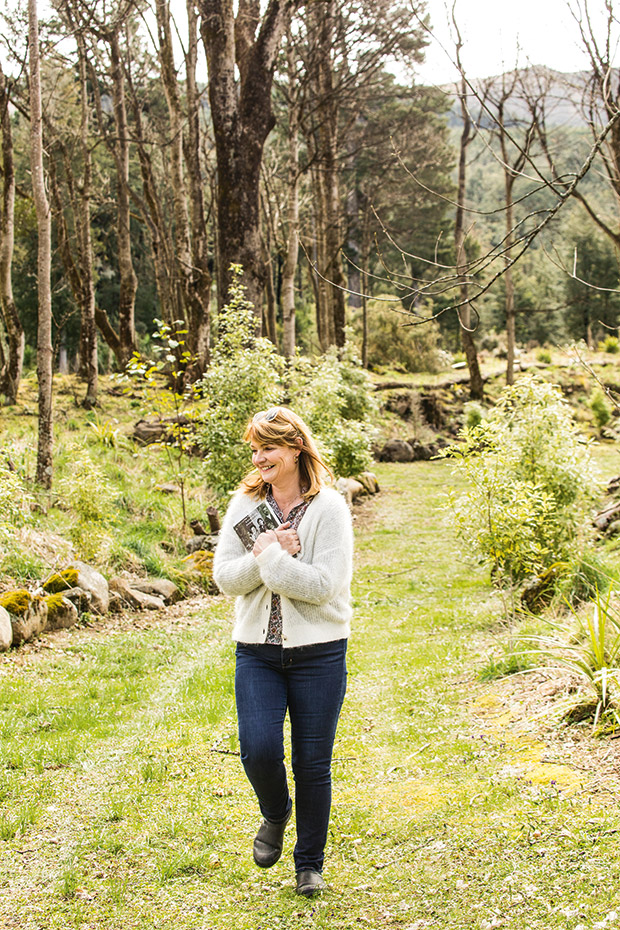 A 15-metre-long, two-metre-wide chunk of train wasn’t the easiest of structures to manoeuvre onto the farm; it required Cheryl’s man-on-the-moon grit and the telescopic arms of a vehicle usually reserved for scooping up overturned milk tankers.

Once installed, Barry the builder from down the road helped bring the old wooden walls back to life, and Cheryl got to work on Pinterest looking for ideas (the Orient Express and Scandinavian interiors were her biggest inspiration). With the original train number and fittings preserved and amplified, the utilitarian bones of The Carriage are still visible under its elegant new skin. 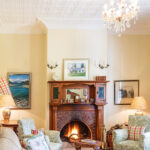 The 1910 homestead with its art nouveau-era pressed-tin ceilings was built by the Roseveare family, who bought Rockwood after Ben’s great-great-grandfather died 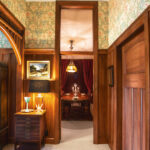 Cheryl added the William Morris wallpaper in the hall and a lamp that used to hang over her grandfather’s dining table in Scotland. 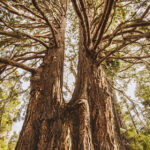 The giant sequoia (just one of the many trees planted by Ben’s ancestors in the 1850s) and a couple of agates (formed in hollows in the rock about 80 million to 90 million years ago and washed down streams to Rockwood) represent two of Ben’s abiding interests: forestry and geology. 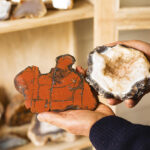 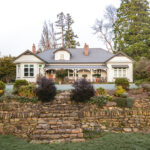 It doesn’t take long to work out what’s behind all these hut-and-carriage do-ups: it’s Cheryl’s way of adding her mark to Rockwood. Born and bred in Scotland, she was on the last days of a backpacking holiday in New Zealand in 2003 when she met Ben.

She returned from Scotland several months later to see if the romance had legs. It did; she never left. While her new address was idyllic (Washpen Road, Windwhistle), it came with an imposing family history — one that stretched back to 1851 when Ben’s great-great-grandfather Henry Phillips arrived from England and purchased the land. 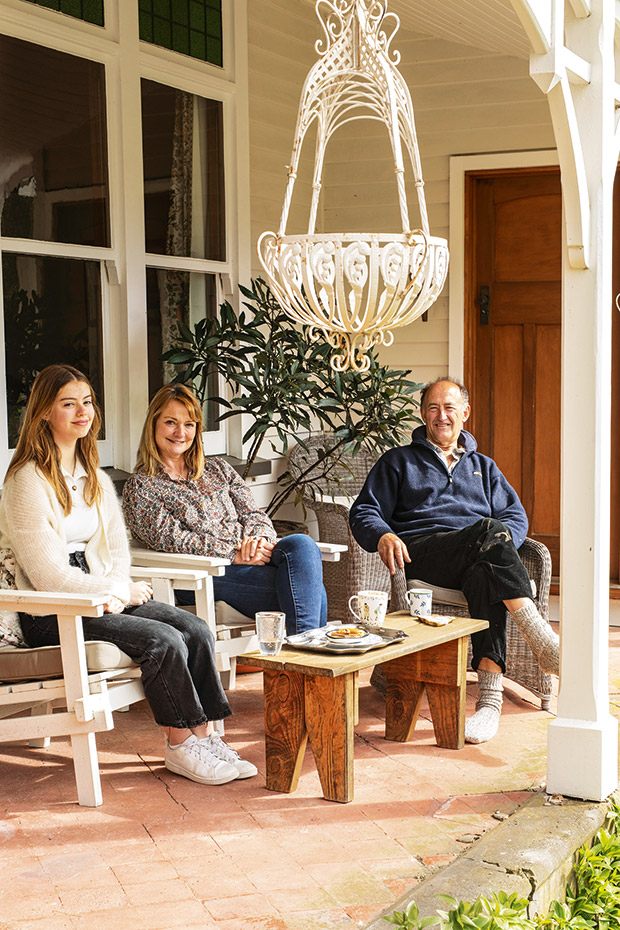 The homestead’s verandah is a sun-trap and the most coveted morning tea spot for Cheryl, Ben and their daughter Emma. But it wasn’t always Cheryl’s favourite corner; it was here, fresh from Scotland, that she heard her first wheezy possum: “I saw them sitting on the cushions and thought ‘what the hell are those?’” Pest control ensued pretty quickly.

Rockwood Station fell out of family hands for nearly a century (possibly due to a preponderance of daughters in the family line). When Ben’s parents Dermott and Claire bought it back in 1973 there was much family history intact: the original 1850s cob house, the 1910 homestead, the woodland garden established by Ben’s ancestors, and the graves of deceased family members.

Cheryl, then, had to find a way of adding her personality to this Ben-centric land. 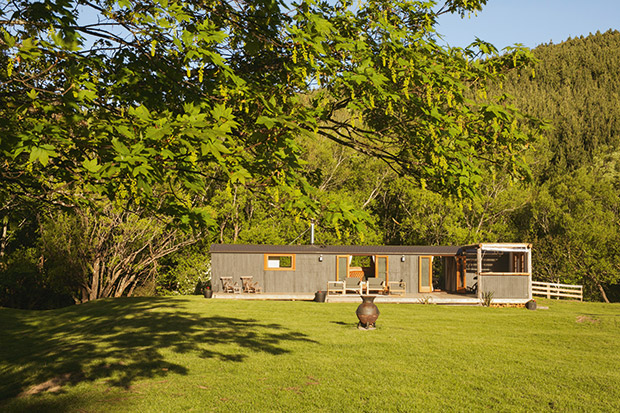 This old Ferrymead goods wagon never had it so good. Once it had secured Cheryl’s admiring glance, it escaped its humdrum goods-ferrying past and now lives out an easy retirement on a plot of pastoral land facing towards Mount Hutt.

The 1910 homestead was still surrounded by the woodland garden Ben’s ancestors established, and Henry and other deceased family members were still lying peacefully in the small graveyard. So Cheryl had to find a cunning means of adding her personality to the mix: “The carriage and huts were my way of expressing myself. I’m an accountant by trade, so I’m very black and white, but I do love houses. And the problem is I love everything — I don’t have one style.”

Rockwood’s credentials as a site for a relaxing holiday hinge on its deep, forest-y serenity: there are 40 luxurious hectares of native bush to ramble through. The Japanese have a term for this: “shinrin-yoku”, which means “forest bath”. It emerged in the 1980s to describe the physical and mental health benefits of time spent under a canopy of trees. 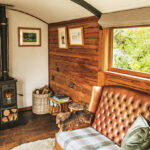 The old rings that were once used to tie down goods in the carriage’s previous working life have been polished up and now sit on the wall as badges of rail pride. 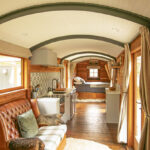 Cheryl also searched out and framed the architectural drawing of the vehicle’s original design, its index card, and a photo of an identical carriage. 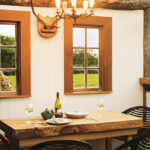 The forest bathing opportunities at Rockwood owe much to Ben and Cheryl’s bush-regeneration efforts. “It’s pretty much pristine,” says Ben. “It’s black beech forest, and there’s a little bit of mātai and kahikatea. We got some funding from Environment Canterbury to go and poison the sycamore and hawthorn. There are more birds now than ever because we’ve been proactive with possum trapping and removing wild pigs. We have bellbirds, wood pigeons, kingfishers, tomtits, fantails, occasional tūī, and one morepork.”

The other serenity-enhancing measure at Rockwood is the patchy wi-fi. Ben says: “When I do the meet-and-greet, I tell people that they have to talk to each other.” Having a digital native under their roof (daughter Emma is 14), they know how indoorsy and screen-stifled present-day upbringings can be. 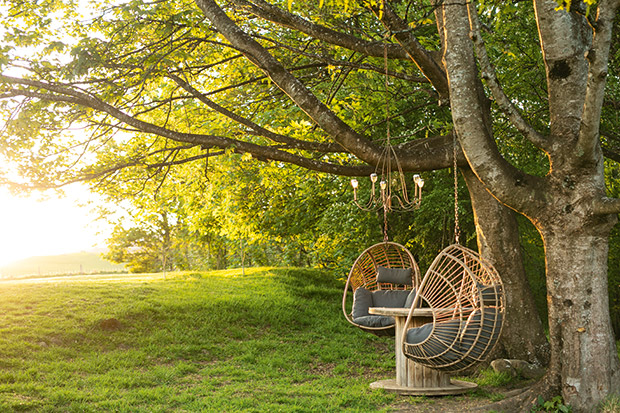 The carriage is solar-powered — even the lightbulbs in the old chandelier that dangles between the outdoor hanging chairs run on sun.

Memories of their childhood holidays (beachy afternoons in the Mull of Kintyre for Cheryl and fishing/camping trips near lakes and rivers for Ben) magnified their keenness to share Rockwood’s bucolic bounty. Says Cheryl: “I wanted to encourage families to play in the river instead of sitting on their devices.”

She has plenty of scope to keep imprinting herself on those 40 hectares by expanding the Rockwood empire. And if she runs out of room, Ben’s sheep and aberdeen angus cattle could probably just shuffle over a bit. 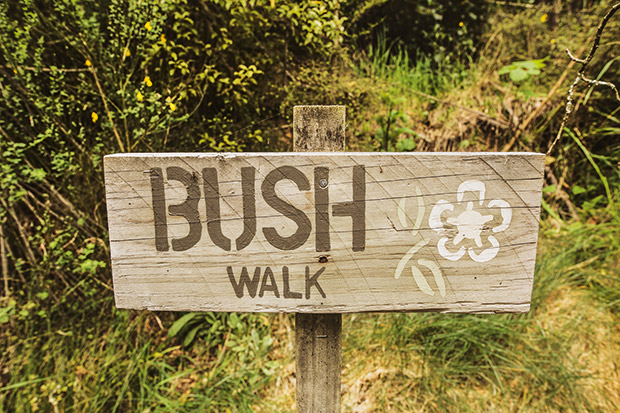 Cheryl winces at this suggestion and insists she won’t go clicking on any more train carriages. But in the next breath, she admits: “Someone mentioned we should put a hut by the river near the swimming hole. I’m finding myself looking at huts again now. Aargh!”